Corporate bosses are making further cuts to seattlepi.com, the shadow of a once substantial news operation. 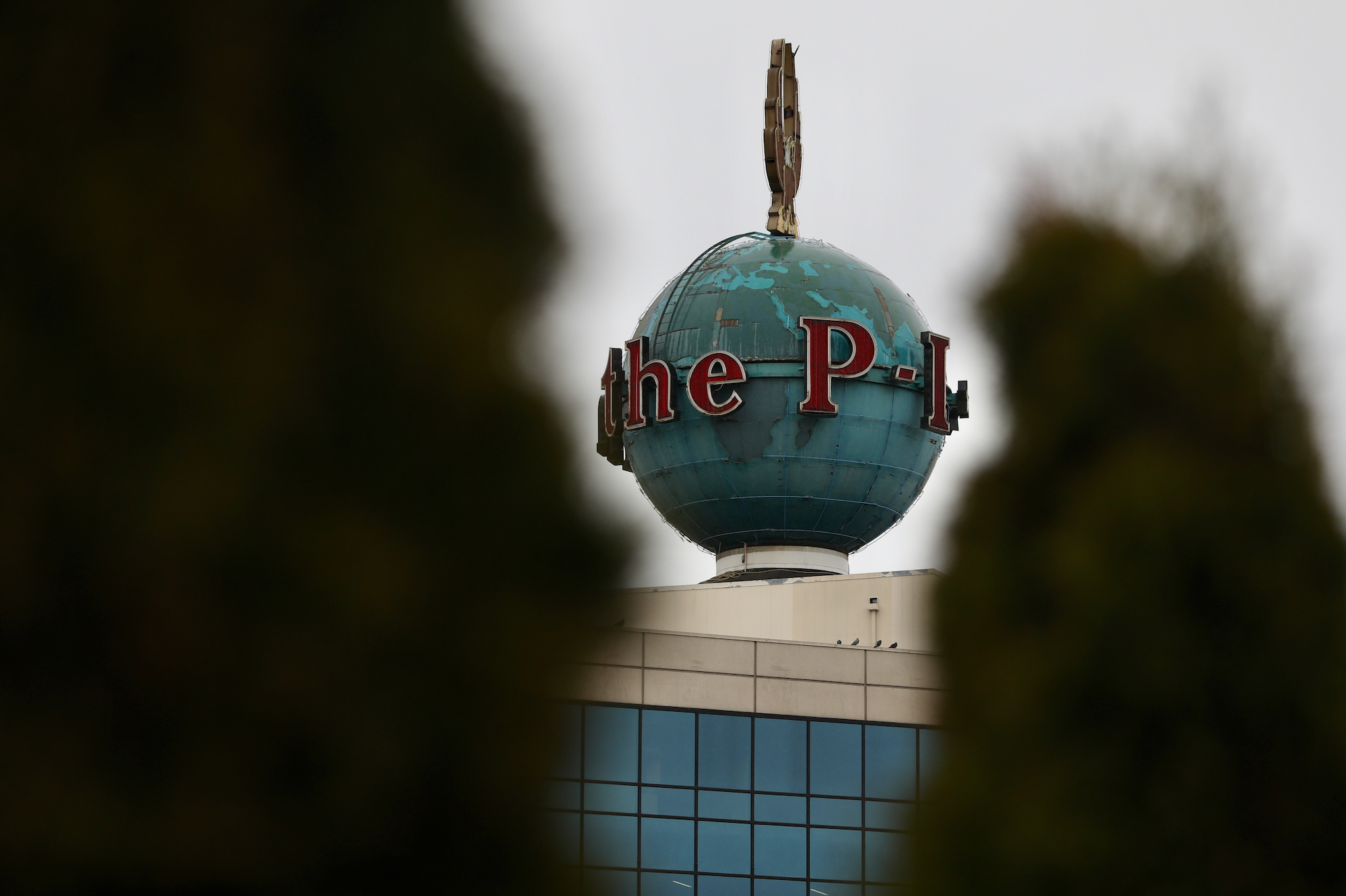 Seen from Myrtle Edwards Park, the landmark Seattle Post-Intelligencer globe still sits atop the defunct newspaper's former offices. But the Hearst Corporation is now shrinking the small staff of its seattlepi.com and moving the remaining local staff to a co-working space. (Photo by Matt M. McKnight/Crosscut)

SeattlePi.com, the remaining lifeboat from the Seattle Post-Intelligencer’s dramatic 2009 collapse, will lose a third of its already depleted editorial staff. In what its owner, the Hearst Corporation, views as a reorganization, two employees were laid off and one resigned, according to a source close to the recent events.

One other employee recently departed and a fifth will leave at the end of the week, Crosscut was told.

When the dust settles, the local news website will have just seven remaining staff. It’s another chapter in the outlet’s decline from around 160 staffers in 2009, to about 20 who moved to SeattlePi.com when the newspaper folded, to the skin and bones team still remaining.

On their way out: Senior Editor Levi Pulkkinen, who also covers courts; Senior Producer Shannon Fears; and Executive Producer Sarah Rupp. All three were well-respected holdovers from the Post-Intelligencer newspaper days. Photographer Grant Hindsley recently put in his notice and his final day will be Friday. And former Homepage/Social Media Editor Kirsten O’Brien left earlier this year to take a job as a news producer with the Seattle Times. Their jobs will not be replaced.

Additionally, the newsroom will leave its offices at Third Avenue and Broad Street north of downtown and move into a new workspace, Northwest Work Lofts. The staff moved several years ago from a waterfront office building, with the landmark Seattle P-I globe, where the paper had spent its final years.

For staff, the layoffs accent what has been a particularly painful couple of years, even amid an exceptionally painful decade. As editorial direction has been increasingly outsourced to the fellow Hearst outlet, SFGate in San Francisco, any emphasis on actual reporting or journalism has continued to fade, said O’Brien.

“What’s happening at the P-I is every journalist’s worst nightmare,” she said. “I personally think it’s time to shutter it.”

In its heyday, the newspaper had a reputation for being scrappy, aggressively watchdogging government agencies. Its editorial board was the leftward balance to the Seattle Times’ more conservative voice, driven by its main owners, the Blethen family.

When still in print, the P-I for years had a joint operating agreement with the Times, sharing printing presses and advertising staff. It was an open secret that the P-I’s owners, Hearst, were interested in buying the Times from the Blethens. In fact, the corporation paid the Times $1 million a year starting in 1999 for the right to do so.

But in early 2009, shortly after the housing market collapsed, Hearst walked away from that possibility and instead put the Post-Intelligencer up for sale. Hearst Newspaper President Steven Swartz told the Times that the situation was untenable. “Our losses have reached an unacceptable level, so with great regret we are seeking a new owner for the P-I,” he said in 2009.

When the Post-Intelligencer did not sell, the presses were stopped and the remaining operation, set up as a new business entity, went exclusively online.

With its thin staff, SeattlePi.com has continued to bounce along in the intervening years. Even as many described the P-I only in the past tense, O’Brien said she believed in the work of the website when she took a job in 2015 and felt proud to come to work everyday.

“I loved it,” she said. “I would work alongside people everyday that were doing work that was important.” She pointed to Pulkkinen’s dogged and aggressive reporting on the courts, reporter Daniel DeMay’s focus on City Hall, reporter Stephen Cohen’s coverage of sports and other beats, and Lynsi Burton’s crime writing.

All the while, longtime columnist Joel Connelly has continued his feverish pace.

“I thought we were doing work that we could be really proud of,” O’Brien said. “Steve [Cohen] described us as a pirate ship within Hearst. We had this culture that was built off this camaraderie and we really liked each other.”

But in 2016, directors from SFGate, a Hearst outlet which shares an office with the San Francisco Chronicle and is heavy on crime, mishaps and aggregated news, flew up to Seattle. They announced a merger of sorts, framing the new arrangement as an avenue for growth. SeattlePi.com would function as an autonomous unit, but would report to leadership in San Francisco. “It was chain of command and we were at the bottom of the chain,” said O’Brien.

In short order, a new, corporate-driven editorial direction began seeping into SeattlePi.com's newsroom. The focus shifted even more toward clicks and traffic than it had before, with every story heavily laden with videos and ads. “All of the sudden, it was like, oh, we have this garbage that we’re putting out and then we wonder why people don’t respect the P-I brand,” said O’Brien.

The corporation additionally telegraphed its intention to eliminate positions it viewed as redundant, dismissing a senior sales person last year.

For O’Brien, it was bad enough to spur her exit to the Times. Now, the departures are continuing.

Hearst's Swartz, meanwhile, in a letter to employees, bragged of earning $10.8 billion in revenue at the company: “Hearst achieved record profits for the seventh straight year, as our efforts to build and acquire great companies in the business data and software sector helped overcome a tough year for many of our consumer media franchises.”