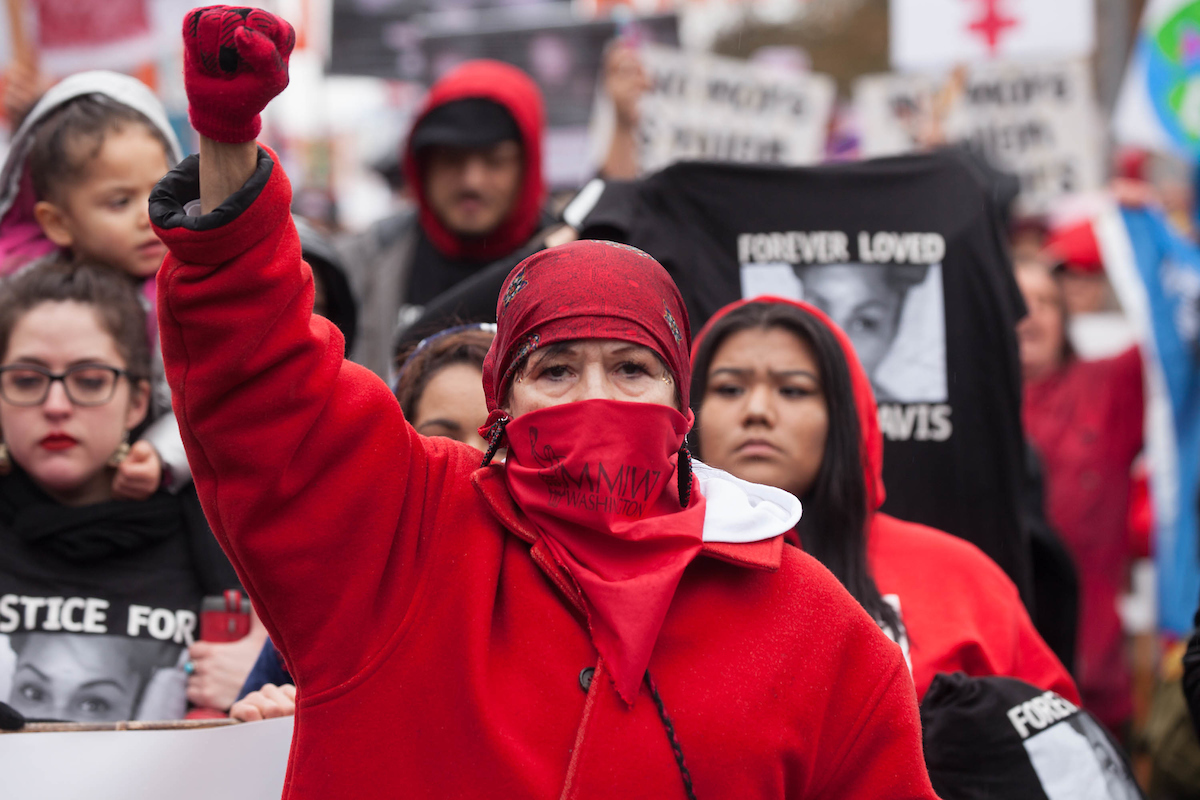 A member of the Murdered and Missing Indigenous Women’s contingent leads the Seattle Women’s March 2.0 in Seattle, Jan. 20, 2018. (Photo by Matt M. McKnight/Crosscut)

American Indians and Alaska Natives comprise less than 2 percent of Washington’s population of 7.4 million people. But of the state’s estimated 1,800 missing persons, they make up 5.5 percent.

A lack of public outrage over so many disappeared Native Americans has resulted in a mostly ineffective system designed to find them. Critics say it falls short in determining which vanished tribal members may be dead or alive or, for that matter, truly missing.

Fighting back tears, the niece told a legislative commission in January that, for two months, her 56-year-old aunt had been “missing or murdered, that’s the question.” Crocker contacted Seattle and other police departments, neighbors and shelters, then made and posted fliers.

“Using my cell phone and the local library to get a layout from Google, I copied and pasted her picture, and printed it out, because when I called the local authorities, the help I needed just wasn’t there,” Crocker said. “The sadness I felt in my heart that the resources I needed seemed impossible to get in touch with. What was I supposed to do?”

Crocker learned a missing Native woman is even farther down the list of priorities for police than a typical missing persons case.

“I have often wondered why I feel that [my aunt] is less important” than other missing persons, Crocker told lawmakers. “She is a beautiful Native American woman and she is missing and my main concern is that this might become a cold-case file. ... How am I going to go on living my life if this case is not solved?”

A month later, she solved it.

Four months after her aunt’s disappearance, the aunt was found in a nursing home, thanks to the family’s search efforts as well as help from Seattle police. Crocker learned the aunt could not communicate well and had been unable to say she had family.

Crocker later spread the good news on Facebook: “Our family’s prayers have been answered,” she wrote in early March. “We all cried tears of joy. And thanks to everyone for all their support.”

Now a new state law that goes into effect in June will bolster search methodology for those who find themselves in a situation similar to Crocker’s. House Bill 2951 is designed to open up the reporting and data-gathering on missing Native women in particular.

“There’s currently no comprehensive data collection system for reporting or tracking missing Native American women,” McCabe said upon introducing the bill in January. “That’s a travesty and I know Washington can do better.” A Senate version was introduced the following month.

Washington State Patrol Capt. Monica Alexander agreed with McCabe. There was no master list of missing Native Americans that could be shared among various organizations and government agencies; each kept their own data. “Until a few days ago, I had no knowledge of this,” Alexander said at a January hearing, pointing out names of missing women on one list that were not included on lists kept by another state agency.

The National Crime Information Database reported 5,712 known incidents of missing and murdered Indigenous women in 2016, while a recent report from the National Institute of Justice found that more than four out of five Native women have experienced violence in their lives.

Additionally, the Centers for Disease Control and Prevention calls homicide the third-leading cause of death among Native women ages 10 to 24. And the U.S. Department of Justice has reported Native women living on reservations are 10 times more likely to be murdered than those who live off the rez.

Homicide was likely the fate of Carolyn DeFord’s mother, Leona Kinsey, 45, who reportedly went to the store in 1999 and disappeared. Police have investigated and made some inroads but the case now sits idle in a police filing cabinet, said DeFord, who lives in the Olympia area. Almost 20 years later, the daughter is still searching for answers.

When she went to her mom’s house in LeGrande, Oregon, after her mom’s disappearance, DeFord discovered the mother had left behind her dog, purse, pager and a full pot of coffee. Her mom’s vehicle was later found in an Albertson’s parking lot.

“We were in a whirlwind of chaos and confusion then,” Carolyn recalls. She still hopes to someday determine Leona’s fate, and continues to update the case on a website called TheUnmissables.com. “The lead suspect in her case is still on the loose and bragging about what he has done,” she notes. “There are no witnesses willing to speak with the police out of fear for their own lives. In turn, my mother’s story has lost momentum because the police have not received any new information to go on.”

McCabe’s bill, she said, would be a modest but needed step towards re-opening the tip pipeline.

A pleased Roxanne White from the Yakama Nation said the bill honored murdered and missing Indigenous women from across the U.S., Canada and Alaska. "Our cases are often never solved, never investigated,” she told the Northwest News Network. “We are not invisible. We are here and we have a lot of families on the Yakama Reservation that are still looking for answers.”

From the day it was introduced in January to its signing, McCabe’s bill took just 52 days to be signed into law. “She worked fast,” said Alexander, the State Patrol captain. “And I mean fast.”

Its passage is likely to be further celebrated during an upcoming, eight-day march by activists from Blaine to Olympia. The procession is set to begin May 5, which is the National Day of Awareness for Missing and Murdered Native Women and Girls, and end on May 13, Mother’s Day.