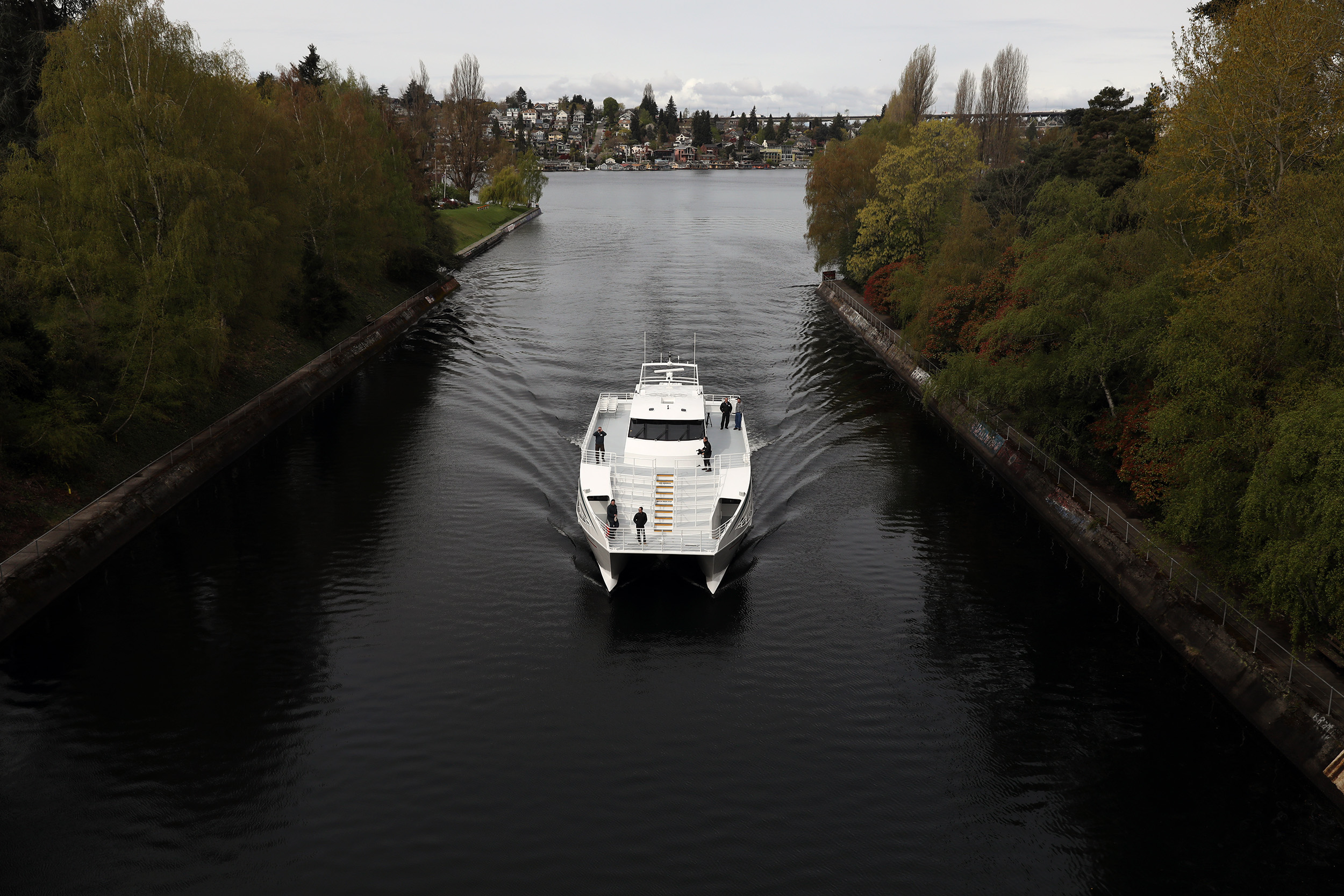 The Saratoga-Puget Sound Express is seen passing through the Montlake Cut from the Montlake Bridge during a water taxi test ride from South Lake Union to Renton.

Imagine flying to work on a high-speed catamaran plying Lake Washington. No car, tolls, bridges or gridlock, just a great view, good food, high-speed Internet and a link between your affordable neighborhood and your destination at South Lake Union.

When you arrive, you can hop on the streetcar or your bike (the boat has a bike rack), or simply walk to work. The commute takes less than an hour and the Mercer Mess is, well, less messy.

That’s the vision laid out this week by SECO Development Inc., a private developer in Renton that is reshaping that city’s waterfront. The company is proposing a privately funded two-year pilot project to run a water taxi service for commuters between SLU and Renton, at the south end of the lake, in 2020.

While Microsoft has its own private bus system for employees, SECO envisions a service that serves the broader public and gets autos off the road. “We want to connect our energizing hubs,” says SECO’s Rocale Timmons, director of planning and development. “We need to find a way to catalyze innovative transportation solutions.”

That’s one way of putting it. Another is that Greater Seattle needs all the help it can get moving people around.

Roads are not the only solution, given our complex geography. The ice sheet that retreated 11,000 years ago left a series of trenches, valleys, hills, islands and waterways. Most travel corridors run north south. Two of the biggest are Puget Sound and Lake Washington.

The earliest inhabitants understood the value of water transportation, as did the early settlers. Between the 1880s and end of the 1930s, the region relied on the so-called “Mosquito Fleet” of some 700 vessels, which ferried folks from one city or town to another. At one time, the top speed on a steamer from Tacoma to Seattle was 77 minutes — which doesn’t look too bad today given rush-hour jams on I-5, especially in Tacoma!

There has been talk of reviving the Mosquito Fleet, on and off since the 1980s. But volume of use, cost, Coast Guard regulations and other barriers have discouraged it. Still, passenger ferry service has been expanding — from Vashon Island, West Seattle and Bremerton to downtown, for example. There are more people wanting to move throughout the region, driven by lack of affordability in Seattle or the Eastside. Populations have climbed, mobility by car has been reduced, commute times have expanded and tolls have risen.

Lake Washington is a natural place to look for launching foot-passenger services. Kirkland, Kenmore, Renton, Montlake (the University of Washington) — these are the kinds of hubs that could be reconnected by a fleet of vessels working the perimeter of the lake. There are 20,000 employees at Boeing and PACCAR in Renton, Timmons says. There are 50,000 in SLU. “People are begging for a transportation solution without adding cars.”

To show off the potential of such a service, SECO invited guests and media on a demonstration run on the SLU-Renton route Wednesday. The vessel was a whale watching boat based in Edmonds, the Saratoga-Puget Sound Express. This lightweight catamaran is propelled by water jets and, at crusing speeds, rides on a hydrofoil that helps it skim along the water. It’s maneuverable and can stop on a dime, and it is fuel efficient. It’s also built on Puget Sound by All American Marine in Bellingham, which would build a custom version for commuters.

That boat would carry about 149 passengers with desk space, bike racks, high-speed Wi-Fi, and good food-and-beverage services. The hydrofoil, plus the use of light-weight aluminum and composite materials, would make it light and speedy. The company is also building a new hybrid passenger boat for Kitsap County that will run between Bremerton and Port Orchard. The company’s president and CEO, Matt Mullett, calls the new boats “Teslas of the sea.”

The Saratoga-Puget Sound Express left the dock at SLU for a leisurely trip through Lake Union to Montlake. We passed float planes, houseboats and kayaks at 7 knots (about 8 mph), the speed limit until you get past Union Bay and under the 520 bridge. It’s not gridlock, but rather a scenic cruise or a stretch where a commuter could get a lot of work done on their laptop.

Once onto the main body of Lake Washington, however, the throttle opens up and you can speed unhindered — our skipper, Pete Hanke, said we got going between 45-48 mph. The lake passage zips by quickly, slowed only and briefly by the bridges. The ride is smooth, surprisingly quiet, and gorgeously scenic with Mount Rainier playing peek-a-boo; the old growth forest of Seward Park and a sense of the wild; and waterfront homes of Seattle and the Eastside providing plenty to gawk at.

Within 20 minutes or so we arrived in Renton at SECO’s South Port development, a mixed use waterfront spread featuring a Hyatt Hotel adjacent to Boeing’s 737 plant, where planes are parked right on the water. It’s convenient for bike commuters as South Port is right at the entrance of Coulon Park, the terminus of the Eastside corridor which will run, like the Burke-Gilman, on an old railroad right-of-way going all the way to Woodinville by around 2020.

The passengers seemed enthusiastic. Mike McQuaid of the South Lake Union Community Council said they are supportive of the water taxi. There is hope such service will ease congestion that could be created by games at the renovated Key Arena. David Allen of Bike All Over was enthused about the connection to the Eastside corridor. The commuter boat could have as many as 25 bike racks built in.

Another enthusiast was Kenmore Mayor David Baker — the Uber- and Lyft-driving mayor — who says he thinks reconnecting the cities on the lake is a great idea: the more modes, the better. He’d like to see service from his town to SLU, maybe also Seattle’s Madison Park, where the old ferry dock could be used by passengers wanting to hook up with Bus Rapid Transit planned for Madison Street. He said Kenmore is already a hub with bus, roads, the Burke–Gilman and Kenmore Air. (“It’s only $20 to fly from Kenmore to South Lake Union,” he says.) Water taxis would add to the mix.

One potential value of Mosquito services on Lake Washington goes beyond improving mobility and lightening the pressure on the roads. That’s the potential unifying effect of reconnecting these communities. Growth is occurring beyond Seattle’s high-priced core due to the market and design.

When you live in a place with problematic geography, keeping things flowing is a priority. But so is much better recognition that planning has to occur outside of traditional civic siloes. What happens in Seattle impacts Renton. What happens in Renton impacts everyone in the region. The opportunity for better regionalism is palpable in this proposal.

Bruce Agnew, head of the Cascadia Center for Regional Development, says the SECO project, starting as a private initiative, could well turn into a public-private partnership with local governments if it proves to be a success. In this phase, SECO is talking to many stakeholders, public and private. And there is interest on the part of policymakers. Agnew says that King County Executive Dow Constantine will be pulling together a passenger ferry service conference in June.

If smart people get serious about using our bodies of water, the old Mosquito effect could have an important unifying effect, as well as a measurable practical value.

This story has been updated to correct a first name and the speed limit on Lake Union. 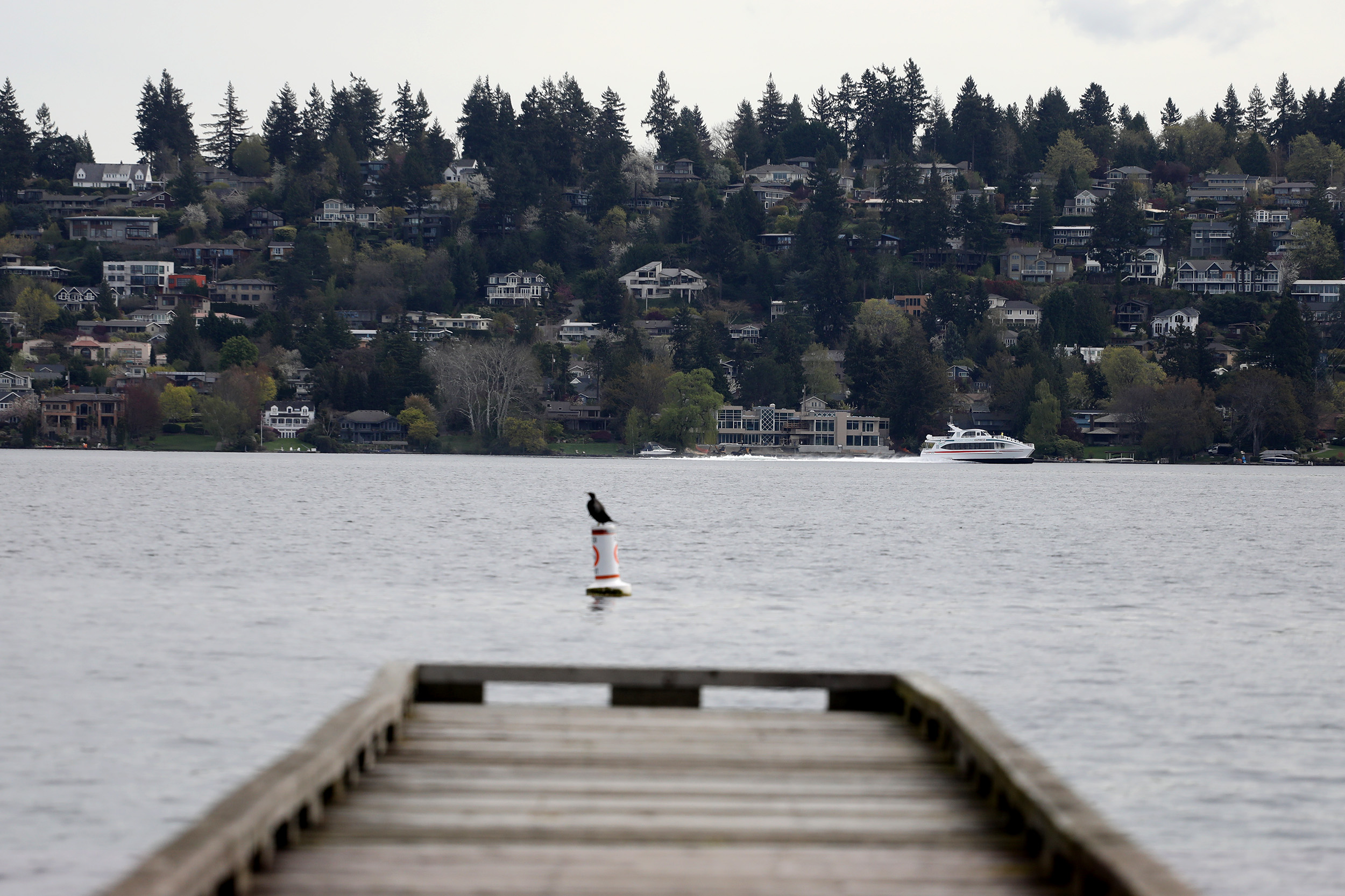 The Saratoga speeds along Lake Washington near Seward Park during a water taxi test ride from South Lake Union to Renton.

The Saratoga speeds along Lake Washington near Seward Park during a water taxi test ride from South Lake Union to Renton.