Seattle, why won’t you stand under my umbrella? 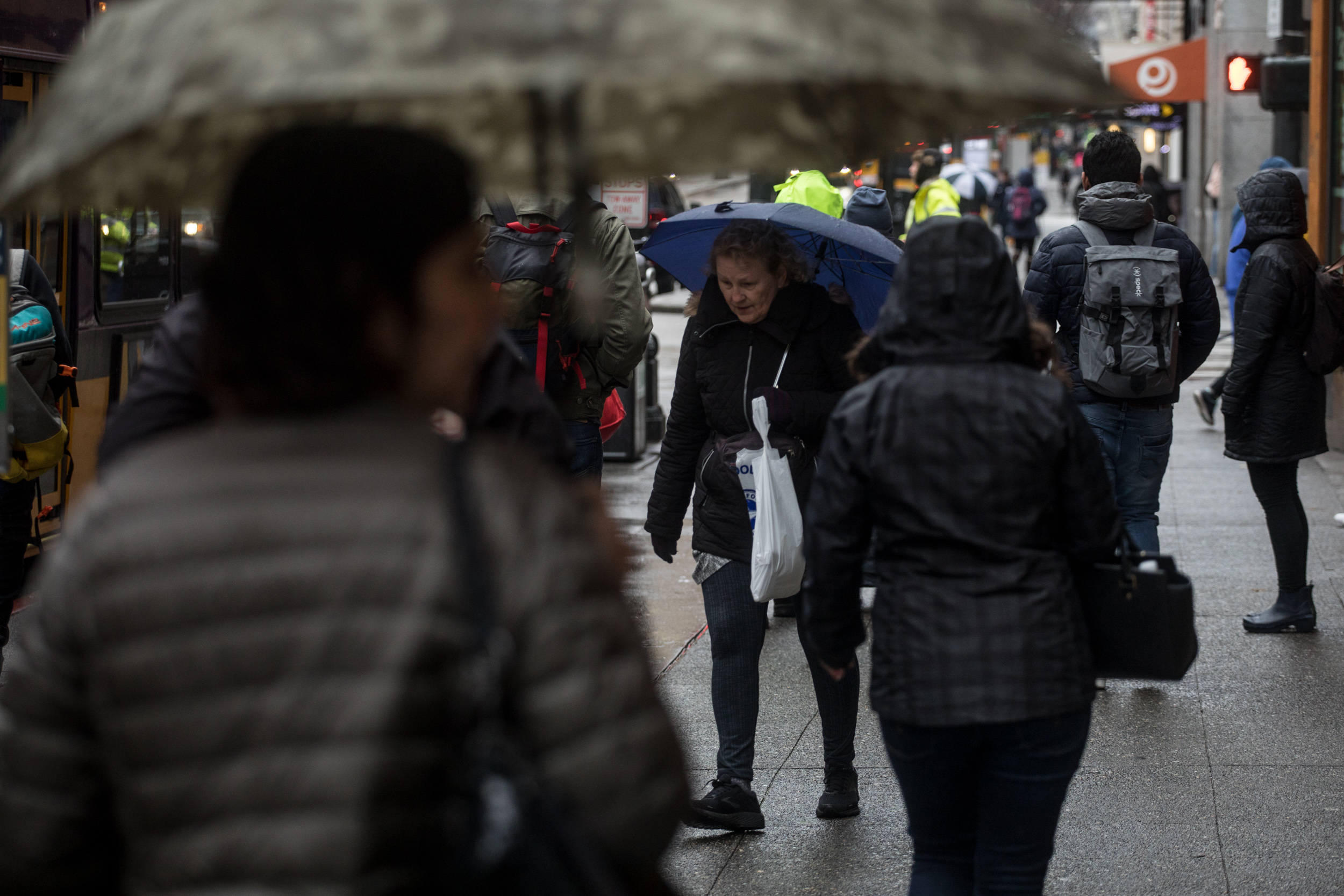 A couple people dare to use umbrellas on the streets of Seattle on a rainy day. (Photo by Matt M. McKnight/Crosscut)

When I touched down in Seattle in 2013, I was bestowed an umbrella to welcome me to my drizzly new home. My friend assumed, correctly, that I was in need of rain protection coming from the drought-stricken desert of Los Angeles. What he failed to mention was that this gift would actually out me as an outsider.

For Seattle doesn’t do umbrellas.

I am baffled by how a place nicknamed Rain City would scorn the universal tool for stopping it. I can’t comprehend how this city that favors function over fashion (see: REI) would be averse to an anti-soaking apparatus. Yet, each time I tote my polka-dot umbrella, I get showered with sneers on the street. Pedestrians in rain-slicked Patagonia parkas huff as they pass, irked how I could be so selfish to hog the sky space.

I wonder if I’ve moved to a virtual reality version of Opposite Day.

Perplexed, I reached out to my Seattle compatriots to source the reasons behind the umbrella hate. “It’s one more thing to carry,” was a common response. Seattleites would rather clutch cups of caffeine, smart phones, paperbacks and dog leashes than a dryness tool. Many I queried had sacrificed too many umbrellas to the Lost & Found Gods to buy another. The logistics of umbrella ownership — what to do with a wet one indoors, how to not forget them when out and about — outweighs their rain-repelling benefits.

My twin sister proves this point. When Lesley put roots in Seattle in 1998, I bought her an umbrella. Perhaps the city loathes umbrellas for their cliché welcome-gift status?

Printed with Gustave Caillabotte’s famous “Paris Street; Rainy Day” painting — in which dapper, umbrella-holding Parisians stroll on a cobblestoned street circa 1877 — the umbrella was meta before it became a word. Lesley loved how the chic umbrella made her feel like she was walking in a “wet oil painting full of light.” Yet, in spite of its uplifting attributes, the umbrella was banished to the closet; Lesley was worried about losing it or leaving it on the bus.

Seattle’s umbrella aversion is also linked to the local’s relationship with rain itself. Like Montrealers and snow and Angelenos and traffic, Seattleites accept rain as the price for living in the abundantly verdant Pacific Northwest. The Emerald City would be less green without constant watering from the clouds. Rain does not keep locals indoors; it beckons them to get outside. My friend, Cat, wistfully speaks of her waterlogged runs as a “cleansing bath.”

I wonder if I will ever adopt this mind-over-splatter mentality.

When I go shopping at University Village, a boutique outdoor mall, I am one of the only patrons partaking in their free umbrella program. Offered at numerous bins throughout the mall, these colossal, canary yellow rain-repellers allow shoppers to stay dry between boutiques without and to not have to deal with a soggy umbrella inside. In spite of this convenient courtesy, the majority of shoppers opt out. They traverse the mall sopping-wet holding equally drenched shopping bags. I marvel at how they appear unfettered by said soakage. As if having a Seattle zip code creates an invisible shield of impermeability.

But, why, Seattle must you resist this rain accoutrement? You act like umbrellas are shackles that hold you prisoner, but they give you freedom to wear whatever you want underneath. Umbrellas are a chance to accessorize, to add a splash of color to the gray skies, to brighten your point of view, literally and figuratively.

A wardrobe stylist by trade, I believe in the power of the sartorial. What we wear is more than material — it allows us to express ourselves and it affects our mood. When I wear my hooded windbreaker, I feel dowdy in the sea of like-minded rain gear. With my umbrella, I can rock my personal style in my mod blue and brown plaid car coat.

Though the minority, I’m not alone in this pro-umbrella sentiment. Take Gena — a rare native who doesn’t own a stitch of outdoor wear — who uses umbrellas to protect her fashionable duds. My writer friend David waxes poetic about the “portable canopy” and “counts any man without one a fool.” He reminds me that in this tech-happy world, umbrella design has remained relatively constant, a testament to their virtue.

What has changed is Seattle’s weather. Rain here once varied between an Evian mister and garden hose spray. Now, in spite of Conservatives’ claims of otherwise, climate change has put our weather patterns through the washing machine. Seattle is now being battered with deluges reminiscent of my New England upbringing. These super-soaking storms just might tip umbrellas back in Seattle’s favor. Another factor is the influx of stylish new residents — creatives, tech entrepreneurs and San Franciscans seeking cheaper rent — that reserve outdoor gear for the mountains not the street.

The other night, while a bouncer was waiting for me to fish out my ID, he scoffed, “you’re not from around here, are you?” I followed his gaze down to my umbrella, realizing the root of his disparaging tone. When I first moved to Seattle, the umbrella jokes hit home. Feeling out of place in this foreign city, I was more sensitive than usual; I was also confused by the animosity for this useful and seemingly innocent object. Back then, the bouncer’s words would have stung, like he was a bully teasing me about training wheels while he did tricks on his two-wheel Schwinn.

Now, with four years of Seattle living under my belt, this mockery rolls off me like raindrops on a waterproof jacket. I rock my umbrella with pride, bopping down the street as enthusiastically as Gene Kelley swinging around a lamppost.

I have become more Seattle than I ever imagined: joining a food co-op, reading books in bars, obsessing over my coffee beans and planning Sundays around Seahawks games.

I used to think my umbrella affection prevented me from being accepted here in the Pacific Northwest. Now, I’m using my outside perspective to remind Seattleites of this once-loved object. After all, the longest-running music festival in town is named after it.

Bring back the bumbershoot, Seattle! 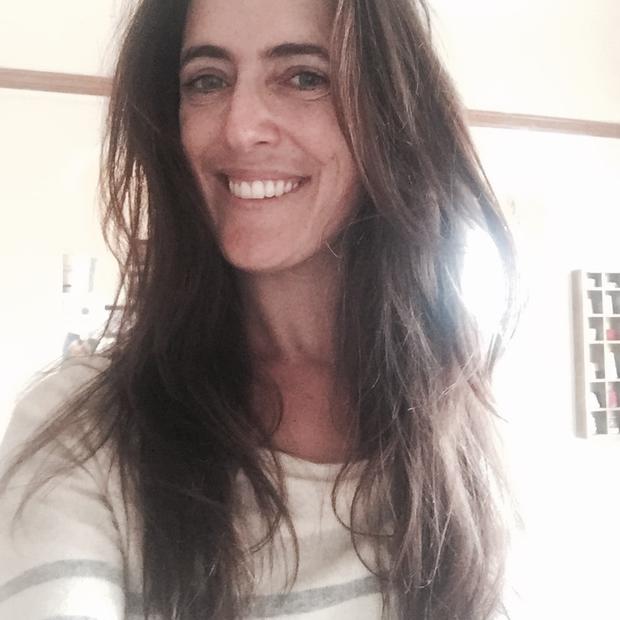 Alexis Steinman is a freelance writer specializing in food and travel stories.