Starbucks mandates racial bias training — but is that the answer? 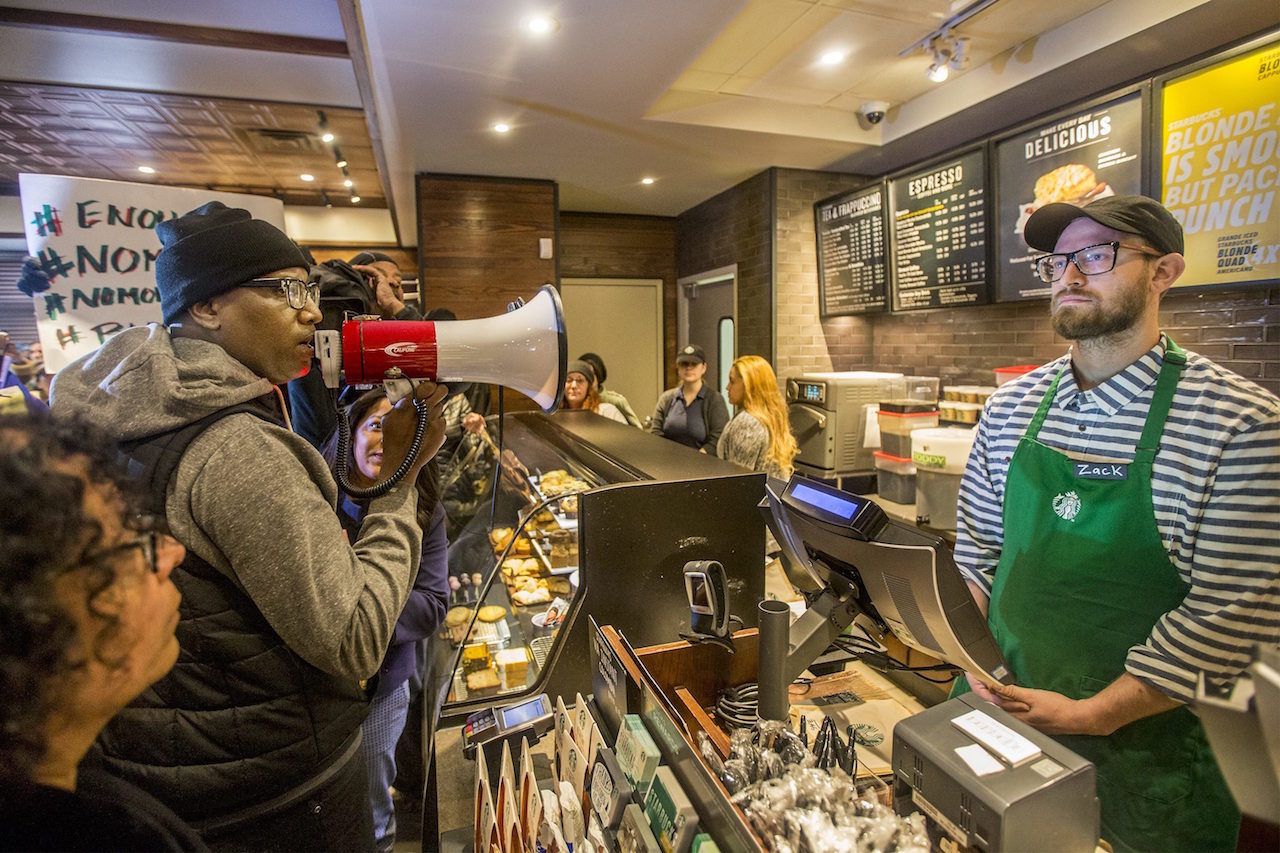 Local Black Lives Matter activist Asa Khalif, left, stands inside a Starbucks in Philadelphia on April 15, 2018, demanding the firing of the manager who called police on two black customers. The men were eventually arrested, an event that was captured on video that quickly gained traction on social media. Starbucks has since pledged to shut down its 8,000 stores on May 29 to train its 175,000 employees on racial-bias training. (Mark Bryant/The Philadelphia Inquirer via AP)

In an announcement that gained widespread attention this week, Seattle-based corporate giant Starbucks announced it is closing more than 8,000 company-owned stores next month so that 175,000 employees can receive racial-bias training. But is diversity or implicit-bias training capable of producing meaningful change?

According to many experts and scientific studies, the answer is no.

Anthony Greenwald, a professor at the University of Washington who coined the term "implicit bias" back in the '90s and developed a widely used test that helps to measure biases, says he's never seen any evidence that implicit-bias training is effective in changing behavior.

“I thought early on that implicit bias should be unlearnable,” Greenwald said. Since then, however, he and other experts have realized behavioral changes after so-called “diversity training” are fleeting.

Greenwald said that although it's clear Starbucks “has a social conscience in its operations and is trying to do the right thing,” it would be a mistake for the company to think training can be curative.

Janice A. Sabin, a professor at the University of Washington who studies implicit biases in health care, agrees. “It isn’t a long-sustained reduction,” she said, referring to biases. The training, Sabin said, might reduce a certain behavior or bias for a day or a week, but as far as more significant changes, “we’re not there in learning how to do that.”

The viral video that led to Starbucks’ announcement about training showed police arresting two Black men — Rashon Nelson and Donte Robinson — at one of its Philadelphia stores. A store manager had demanded the two men leave the coffee shop because they had not made a purchase. One of the men had asked to use the restroom while waiting for a third person to arrive.

On Thursday, Nelson and Robinson appeared on television for the first time. Nelson said he sat down next to Robinson after being told restrooms were for paying customers only. Nelson and Robinson said police never read them their rights or explained why they were being arrested.

According to The Philadelphia Inquirer, a police report claims "the two men cursed at the Starbucks store manager and refused to leave after officers repeatedly asked them to. It also accused the men of insulting police by saying, 'Cops don’t know the laws,' and 'Y’all make 45G a year.'"

The incident sparked protests and a chant: "A whole lot of racism, a whole lot of crap, Starbucks coffee is anti-Black.” It set in motion the hashtag #BoycottStarbucks on Twitter. And Starbucks executive chairman Howard Schultz and chief executive Kevin Johnson traveled to Philadelphia to meet with the two men and apologize. In a statement, the company said it hoped “this painful incident can become a vehicle for positive social change.” (The employee who called the police is no longer employed by Starbucks.)

The first step toward that positive social change, Starbucks said, would involve an afternoon of racial-bias training. The May 29 training is being developed with help from Bryan Stevenson, founder and executive director of the Equal Justice Initiative; Sherrilyn Ifill, president and director-counsel of the NAACP Legal Defense and Education Fund; Heather McGhee, president of Demos; former U.S. Attorney General Eric Holder; and Jonathan Greenblatt, chief executive of the Anti-Defamation League.

Experts say, however, that diversity training can actually promote exactly the kind of behavior it is attempting to discourage.

Cheryl R. Kaiser, chair of the psychology department at the University of Washington called the episode an “unremarkable incident in the everyday lives of people of color in our country. It’s probably its ordinariness that makes it so problematic.”

She said there’s “this feeling of resentment that can grow from poorly done diversity training.” White men, for example, might feel like they’re being cast solely as part of the problem and hire fewer people of color as a result.

“The psychological process there is reactive and not necessarily conscious,” Kaiser said.

That isn’t to say, however, that there aren’t other steps Starbucks could take that would meaningfully impact the environment at its stores.

Greenwald, for example, suggests Starbucks could collect data by observing its operations in various shops. Are African Americans treated differently? Do African Americans linger as long as Whites at various locations? What about the race of the employees? (Although Starbucks' executive leadership is mostly White, about 40 percent of its employees in the U.S. are people of color.)

The point, Greenwald said, is to “try to be the best detective we can be on our own operations” and detect disparities.

Sabin said data can help develop standardized processes meant to mitigate biases as much as possible.

“The less discretion in the process of decision-making for people on the front line of an organization, the less likely bias will occur,” Sabin said. For example, Sabin said when she traveled to France, she knew the rule at the Starbucks there was that a purchase was needed to use the bathroom because the code was printed on receipts. Applying those kinds of rules consistently, Sabin said, could go a long way in minimizing implicit biases.

On Wednesday, Starbucks told The Washington Post that in Philadelphia "in this particular store, the guidelines were that partners must ask unpaying customers to leave the store, and police were to be called if they refused." A Starbucks spokesperson acknowledged, however, that in this instance "the police should never have been called. And we know we have to review the practices and guidelines to help ensure it never happens again."

“It’s just kind of heartbreaking,” Sabin said. “We have to acknowledge that these stereotypes in society exist. We really have to acknowledge this is the human condition.” Experts also say it’s important to point out that implicit biases don’t necessarily correlate with personal beliefs. An individual can, for example, be a champion for women and still have an implicit bias that favors the employment of men. (One of the best-known examples in the successful elimination, or at least reduction, of gender bias came in the 1970s when orchestras began using blind auditions. The percentage of women in top orchestras shot up dramatically, from 5 percent in the 1970s to more than 30 percent today.)

In addition to biases against certain races, genders and sexual orientations, Sabin said it's important to note other biases and prejudices that exist: against those who are overweight, have a mental illness or who are adolescents, for example. These biases are especially likely to come into play, Sabin said, in hurried, stressful atmospheres, such as a busy coffee shop.

Kaiser said investing in resources, such as hiring a diversity manager, can also help companies succeed. Hiring mentors who show employees how to tackle racial biases might also make people feel empowered, like they can be part of the solution.

Most importantly, Kaiser said, corporations need to take the time to evaluate what’s been put in place to determine if any new policies are actually working. Too often, experts say, companies announce initiatives to much fanfare but shy away from sharing any results, in part because they fear opening themselves up to lawsuits. Greenwald, however, argues the public is willing to forgive a lot, as long as they believe entities are attempting to do the right thing.

“There’s no magic bullet, but I think the science is young, and I think we’ll get there,” Sabin said.