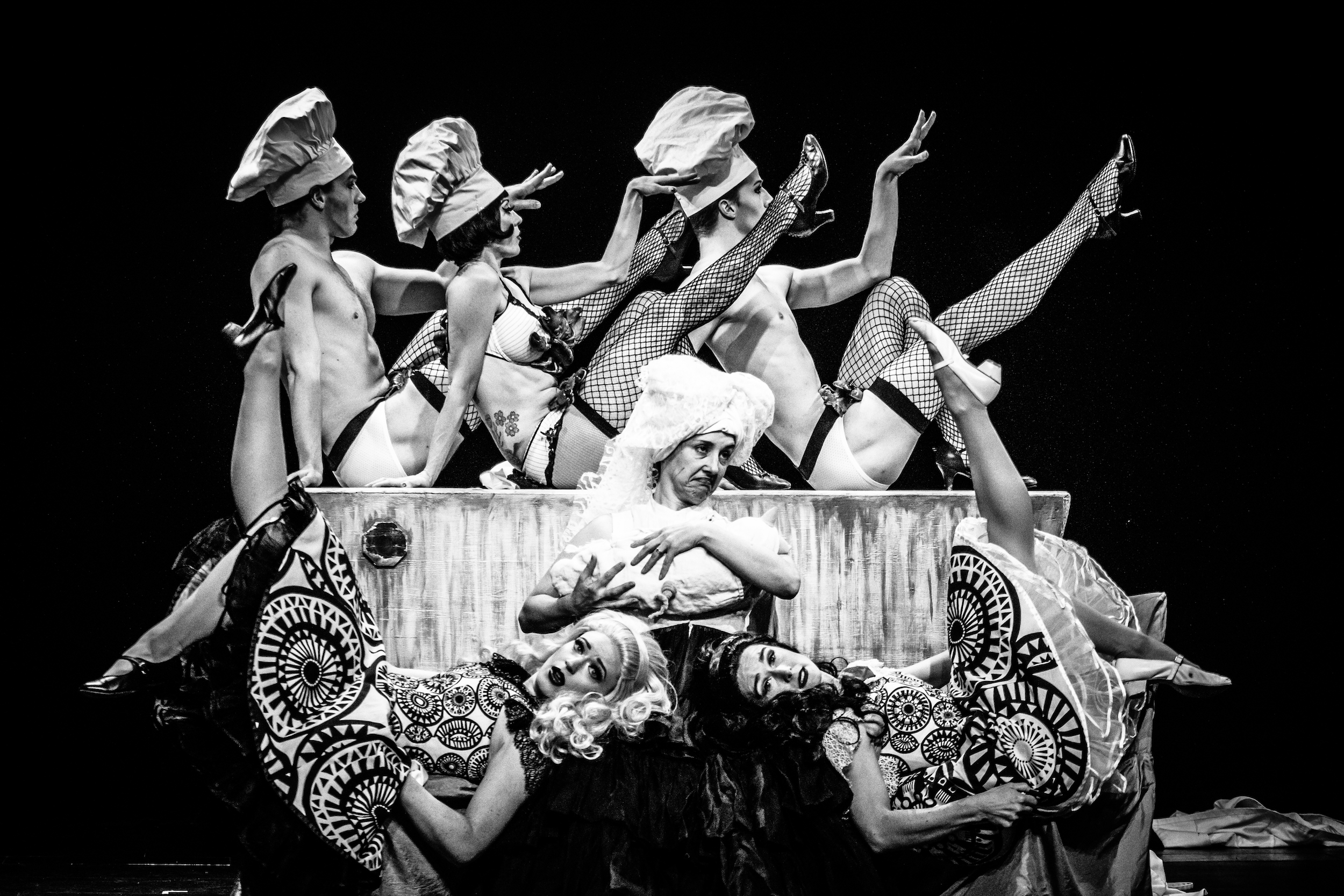 A scene from “Through the Looking Glass: The Burlesque Alice in Wonderland” (POC Photo)

“Through the Looking Glass: The Burlesque Alice in Wonderland”

Lily Verlaine and Jasper McCann are back, with their “ecdysiastic” (i.e. striptease) take on the classic Lewis Carroll children’s book. The show includes some of Seattle’s top dance talent, including Whim W’Him’s Tori Peil as the Cheshire Cat and Paris Original as the Knave of Hearts. Verlaine herself appears as the hookah-smoking caterpillar. The show includes a live band performing an original score “inspired by hard-bop, psychedelic rock, go-go, and Indian Raga-pop recordings of the mid-60's.” Verlaine/McCann had a live band for their recent “Burlesque Nutcracker” and it kicked things up to a whole new level. —M.U.

Seward Park Audubon Center hosts the first ever Seattle Bird Week, for bird lovers and future bird lovers alike. The Center will be hosting Bird Walks all around town — from Magnuson to Cal Anderson to Lincoln Park. On Thursday,  there is an exciting (and sold-out) taping of the BirdNote Live podcast. You can watch it live or listen later on their YouTube channel. Talk about all that birds bring to our lives and natural world over a limited edition Top Pot Bird’s Nest doughnut or, head to West Seattle’s Beer Junction for a pint of their favorite bird-inspired beers: Aslan Brewing’s Space Eagle Brett IPA and Spoeztl Brewing’s Ruby Red Bird Ale. If you’re more comfortable loving birds from the comfort of your own home, check out the Bird Week website for a list of SPL’s recommended bird reading list or listen to a collection of StoryCorps stories on our avian neighbors. —N.C.

You never know what you’re going to see at this annual arts fair. A few years ago I found myself standing next to a guy in a Superman costume, then realized: “Oh, wait – he’s stark naked and in Superman body paint.” (SEAF advises that “no bare genitalia” is allowed.) Live performances (music, spoken-word, aerial-and-bondage demonstrations), a “Vamp and Sole Shoe Contest” (with a prize for “best dressed below the knees”) and body-painting classes are all part of the fun. Sometimes there’s truly terrific visual art on show, too. —M.U.

A pulsing 1970s disco in L.A., the speeches and sermons of Reverend Martin Luther King Jr., Dizzy Gillespie's vast canon of music and the effect of the prison system on African American families -- these diverse topics are discussed via dance in the current tour of the remarkable Alvin Ailey American Dance Theater. Now in its 60th year, the NYC-based company continues to champion modern choreography and dance by and about the Black experience. The mixed bill (check website — different pieces appear on different nights) celebrates an array of choreographers and styles, and each night concludes with "Revelations," the must-see national treasure created by Ailey himself as a paean to African American history. —B.D.

Of an Impossible Country: Latinx Poets at SAL

"I am my own devastating God." So writes Rachel McKibbens in her poem "Shiv," about the challenge of trying to "pass" in white America. This young Mexican-American poet has gained fame in the literary scene for her powerful poems of resistance, as well as her captivating presence on the slam stage. She joins fellow poets Javier Zamora, originally from El Salvador, and Benjamin Alire Saenz, who grew up on a cotton farm in New Mexico, to read poems about bumping up against borders and breaking them down. —B.D.

In Seattle, we’re lucky to have wonderful independent bookstores, from Capitol Hill’s Elliott Bay to Phinney Books to Georgetown’s Fantagraphics. Visit them any and every day but especially this Saturday, to celebrate National Independent Bookstore Day. Visit three participating stores and get your “passport” stamped for 30 percent off at any store. Drop by Fremont’s Book Larder and pick up Samin Nosrat’s “Salt Fat Acid Heat” for fabulous cooking. If you’ve yet to have the chance, peruse poetry at Open Books Poem Emporium in Wallingford or head to Ravenna Third Place books and pick up a great collection of short stories, “All the Names They Used for God” by Anjali Sachdeva.—N.C.

If you go: Independent Bookstore Day, all around Seattle, April 28 (Free)

It’s been 50 years since local activists were inspired to start the local Black Panther Party in the mourning and chaos of the days following Martin Luther King, Jr.’s death. It was the first chapter of the Black Panther Party formed outside California and had a profound impact on the community. This celebration of 50 years of pride and power kicks off with a Free Community Breakfast and continues with speakers like Danny Glover and Fred Hampton, Jr. who will discuss issues ranging from the school-to-prison pipeline to hip hop concerts. —N.C.

The closing shot of the 1962 film “How the West Was Won” always gets snickers from contemporary audiences, as it presents sweeping vistas of gridlocked L.A. freeways as the pinnacle achievement of the white conquest of North America. A new exhibit at the Henry Art Gallery by Portland-based Diné/Navajo artist Demian DinéYazhi’ (winner of the 2017 Brink Award honoring emerging Pacific Northwest artists 35 and under) turns that notion on its head. It offers a bracing “de-colonizing perspective” of indigenous lands degraded by uranium mining, Native American-themed tourist traps and endless suburban subdivisions. The show consists of a neon sculpture and six slide-projections of photographs by DinéYazhi’, captioned with phrases written by the artist. Sometimes the captions are in tension with the images shown; sometimes they’re in harmony. The images, which range from figurative to abstract, are dominated by Southwest landscapes and homoerotic imagery (DinéYazhi’ identifies as “heterogeneoushomosexual”). The texts can be elusive, confrontational or effortlessly poetic. (A glimpse of peaks rising above cloud-cover is captioned: “Soaring Thoughts Disguised as Mountains.”) The show asks you “to forfeit your misconceptions of Indigenous identity” and open yourself up to DinéYazhi’s landscape-disassembling/re-assembling road trips. Give yourself time to absorb the slide-projected images, and you’ll be pulled into freshly seen worlds. —M.U.

Every month “California Sunday Magazine” tells well-crafted stories that are enlightening, surprising and told with heart (check out this recent article for a nod at the state of Seattle housing). Starting a few years ago, the creators thought, “Why not bring stories to the stage and create a live magazine?” And thus was born Pop-Up Magazine. They’ve come to Seattle twice and each time I’ve left so full — of compassion, of intrigue and of gratitude to have heard the stories they’ve presented. This time, Pop-Up Magazine is partnering with National Geographic for a one-of-a-kind night featuring National Geographic Explorer and submarine pilot Erika Bergman and graphic journalist Wendy MacNaughton. Also on stage will be California-based chef Samin Nosrat, author of the brilliant instructional cookbook “Salt Fat Acid Heat” and incredibly charming supporting player on the show “Cooked.”—N.C.