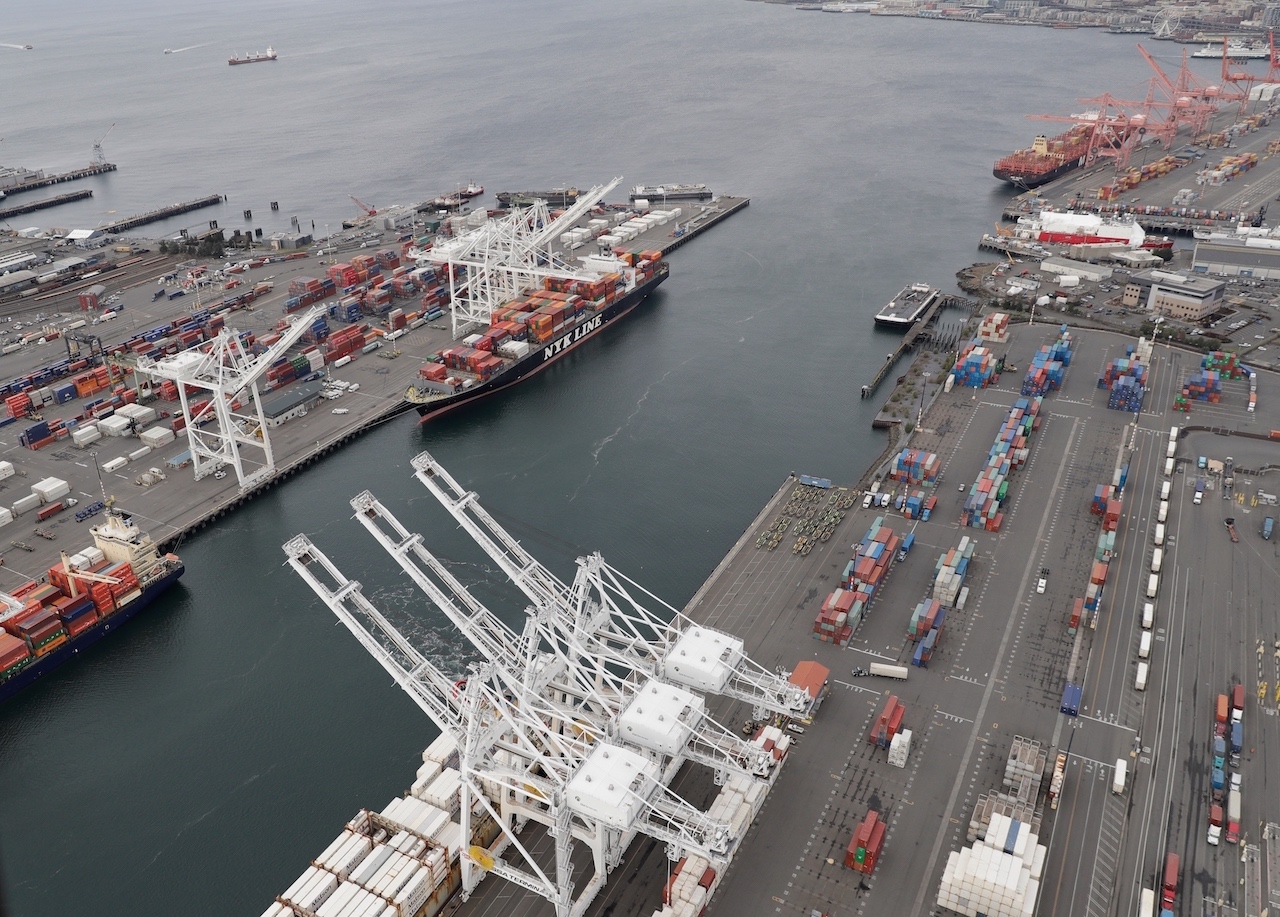 Cargo cranes at the Port of Seattle are shown in this aerial photo taken on Feb. 23 in Seattle. (AP Photo/Ted S. Warren)

One of the building blocks of international prosperity, and a policy direction supported by virtually every economist in the world, is under direct attack. And yet international trade seemingly has very few allies — even here in trade dependent Washington state. Who is going to stand up and fight for free trade?

Once upon a time, protectionism made economic sense. But since World War II the world has recognized that lowering trade barriers and preventing trade wars was good policy. The creation of the World Trade Organization was a big step toward standardizing trade relationships. The series of free trade agreements negotiated by the United States were steps to go even farther by lowering or eliminating tariffs and trade barriers.

Here in Washington, trade is the ultimate local issue. From the Boeing factory floor, to orchards and fields in eastern Washington, the state’s economy is based on trade — especially with China.

For that reason, Washington state politicians of both parties have traditionally supported free trade agreements in Congress.

But today, populists on the right and left have risen up against the tide of history. Donald Trump and Bernie Sanders both oppose free trade deals, and neither party is willing to stand up for free trade now. In the 2016 general election, the two finalists for an open U.S. House of Representatives seat for parts of Seattle and nearby cities — both Democrats — opposed the Trans Pacific Partnership. Pro- free trade Democrats are becoming as rare as pro-choice Republicans, even here.

And now comes Trump. He has pulled the United States out of the Trans Pacific Partnership, has forced Canada and Mexico to start renegotiating the North American Free Trade Agreement (NAFTA), and has crippled the Export-Import Bank (whose help financing the sales of U.S.-manufactured goods abroad has long drawn the support of Boeing and other major manufacturing jobs providers). And now, Trump has taken us to the brink of a full-on trade war.

Trump has started the clock on increased tariffs on steel and aluminum, and on a huge package of products from China. Predictably, our trading partners have threatened to retaliate.  And just the threat of a trade war caused the Dow to lose 1,100 points in two days. Markets did better after Chinese President Xi Jinping spoke Tuesday of opening his country’s markets to more trade, but there is still a lot of uncertainty.

Protectionism doesn’t work. Virtually every claim that flat Earth populists make about trade is based on myth, but that doesn’t stop people on the right and left from screaming that trade agreements have been a disaster, and that it’s time for a return to America first. They have said it so loudly and for so long that huge numbers of Americans now believe it, especially because they rarely hear from the other side.

Those who support trade are losing the battle by simply not showing up to fight.

Yes, America has a large and persistent trade deficit, but economists agree that these numbers don’t measure the effect on the economy. Economics is not a zero sum game, and trade balance sheets don’t show which side is winning.

Yes, America has lost manufacturing jobs, but most of those losses — 85 percent, according to the Financial Times —  were the result of automation, not outsourcing factories to other countries.

Trade is good for all countries, rich and poor. Liberalizing trade and lowering barriers has raised living standards around the world.

And the Trans Pacific Partnership would have lowered 18,000 taxes on American products, increasing exports and creating good American jobs. Trump didn’t kill the partnership; the other 11 nations went ahead and signed the agreement without us. Our absence from this massive trade deal dramatically increases China’s influence in Asia.

The populist attack on trade should be especially feared here. Washington is the most trade reliant state in the nation, with 40 percent of our jobs dependent on trade. A serious trade war could do to Washington state what the loss of General Motors did to Flint, Michigan.

But where is the outrage? Where are the protests? Where are the advertising campaigns urging voters to call lawmakers and demand free trade? Why have we allowed globalism to become a four letter word?

Under the Constitution, Congress controls trade policy. They can take back the powers they have delegated to the president to impose tariffs. Boeing, Microsoft, Amazon, the Washington Farm Bureau, and every major business association and chamber of commerce should band together and insist — no, demand — that our congressional delegation lead the fight to pass legislation to stop Donald Trump’s trade war.

The business community — and unions whose members have jobs because of trade — should back that up with a public campaign to dispel the myths and lies and explain how vital trade is to the people of this state.

It’s easy and apparently popular to blame immigrants and foreign factories for “stealing our jobs.” Donald Trump got elected using that rhetoric; Bernie Sanders nearly won the Democratic nomination. But every objective analysis indicates that increasing trade by lowering tariffs will create economic growth and help solve the problems we face, while protectionism makes everything worse.

The business community and civic leaders need to wake up and fight back. They have fallen far behind the populists who now drive both our parties. But facts are not only stubborn things, they are powerful things.

Those who know how important trade is need to start using facts to win arguments and influence public policy before it’s too late.