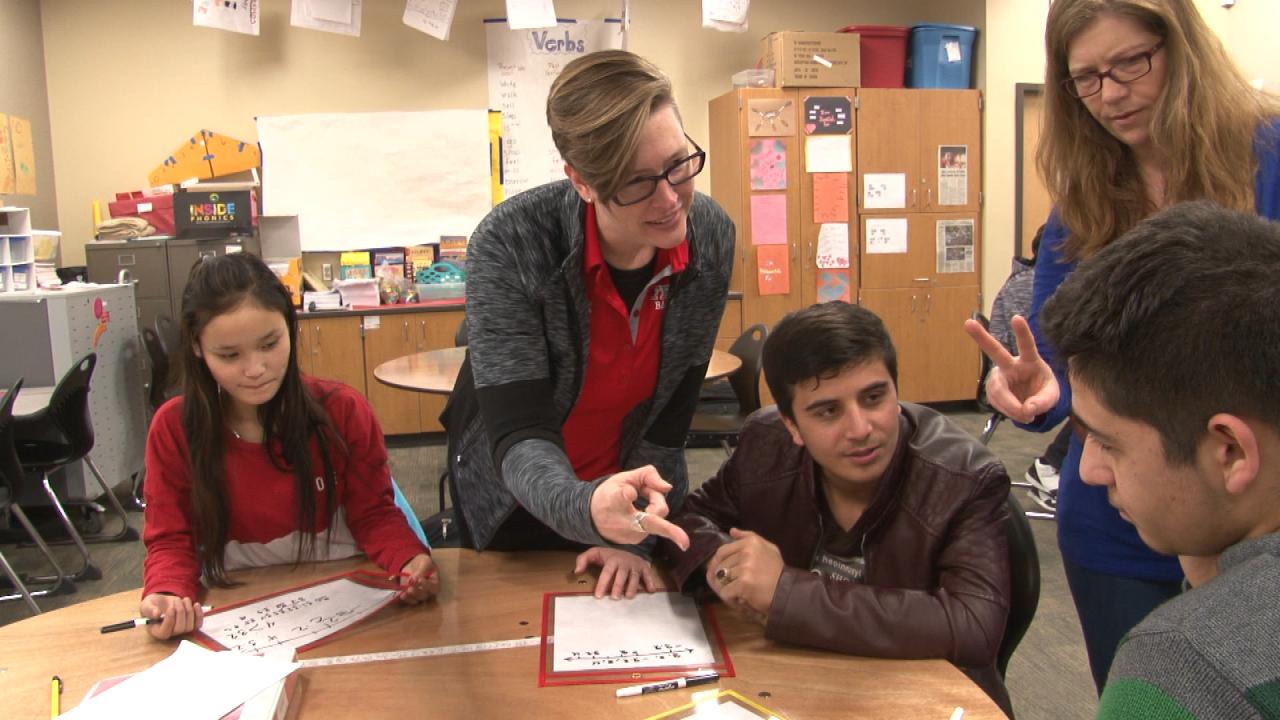 Mandy Manning, 2018's National Teacher of the Year, in her classroom at the Newcomer Center at Ferris High School in Spokane. (Photo Credit: Ferguson Films.)

When Mandy Manning, the National Teacher of the Year, meets with President Donald Trump later this week at the White House, she will deliver a message from her immigrant and refugee students: Be mindful of the language you use when talking about the foreign-born. Because what you say could trigger hurtful behavior.

Manning, 42, teaches at the Newcomer Center, an English language development program for newly-arrived immigrant and refugee students at Ferris High School in Spokane.

The Portland native has lived all around the country, as well as overseas. As a former member of the Peace Corps, Manning served as a teacher in Armenia. She has also worked as a teacher in Japan, Texas and New York, where she taught students in the Bronx, 75 percent of whom were English-language learners.

Manning's mother raised her single-handedly. Part of the reason she's moved around so much, she says, is that like her mother, she values change and new experiences. "My mom just likes to shake it up a bit," Manning says.

These days, however, Manning, a wife and mother of three children, feels settled in Spokane where she has taught for the last 10 years.

In a phone interview, Crosscut talked to Manning about her National Teacher of the Year award, her students and her teaching career. The interview has been edited and condensed for length and clarity.

When did you first know that you wanted to become a teacher?

I graduated from Eastern Washington University in 1998, and I worked for a TV news station, but I just knew that I wasn't well-suited, personality-wise, for that. And one of my friends was working as a paraeducator in a high school in Shelton. And he told me I could be a paraeducator because that's what he did. And I was like, “Well, okay.”

A paraeducator is an instructor who works with a classroom teacher and usually provides one-on-one support for students. I worked with special education students, and I had an opportunity to coach Special Olympics basketball that year. It was a really great introduction to being a teacher.

I taught in the Peace Corps, but I still wasn't convinced because I wasn't certified to be a teacher. After the Peace Corps, I moved to Texas to be with my Aunt Carol, and she was a teacher. She taught theater for years and years. We did a summer camp, and she's like, “I saw you with the kids. I saw you and I know that you should be a teacher.” I actually got a job teaching theater and speech and debate and communications in Spearman, Texas, which is this little, tiny town up by the Oklahoma border. It was crazy because I had no confidence in myself at all, aside from just being my regular self. I was sort of flying by the seat of my pants.

But the school did several things, like I had a mentor teacher, and they really supported me and helped me grow. But also, from the first moment of being in the classroom, the kids ... it was like a magnet. I loved being with these teenagers, and they just had so much life and they were excited and nervous. There was just endless possibilities. I was like, “Wow, teaching is really important. It's a really important thing and I like it, and it gives me purpose. My life would have meaning if I could impact these kids and help them to be who they dream of being.”

What made you want to work with immigrant and refugee kids?

My experience in the Peace Corps started it, and then I also taught in Japan for two years. And so I had some background in English language development.

The Newcomer Center position opened up right before the 2011 school year started. And I was like, “Oh my gosh, that's like my dream job. This opportunity to be these students' first teacher and to witness this beautiful journey.”

So I applied and I got the position. And I've been there ever since, and I honestly can't imagine doing anything else.

Spokane, I imagine, like the rest of America, has changed a lot since you first started teaching there. Has the student population changed in terms of its makeup?

We have had a steady incoming of Burmese. We started to get some more Syrian refugees because of the crisis in Syria. Of course, students from Iraq and Afghanistan because there are difficulties in those nations. And then also, if you look at some of our immigrant populations that are coming from El Salvador or Colombia or Guatemala, you can look at those nations and see that they're having some problems that then push people to leave because of safety issues. And then several African nations, because there's a great deal of unrest in the different African nations, like Uganda, Congo, Sudan. Rwanda. Then we have, in the recent years, the last three years, had several new Ukrainian students come in. You just have to follow the news, and you can see where our kids are coming from.

Even though the students are in my classroom five periods a day, they still experience high school life just like any other kid. They leave the classroom to go to lunch when it's lunchtime. Every time the bell rings, I expect them to get up and leave the classroom, go see their friends, use the restroom, get water, whatever they need to do in-between classes, so that they get the feel of what a high school schedule is like.

Do you find that the students in the regular curriculum are welcoming to these new students?

And how welcoming has the city been?

I do hear stories. One student from Rwanda did say that over the past year-and-a-half she has encountered a lot more racism than she had previously. She has been told several times by other students at our school that she should just go back to Africa. That has been really, really hard for her.

She's from an African nation, and there have been specific comments made about people from Africa being ... I don't want to use the words that were used, but people in high offices have said negative things.

I asked my students to write letters to President Trump. She communicated in her letter that people in positions like the president should really work to use language that is very supportive of every person because that communicates to the nation how they should be behaving. When people in positions of power convey negative messages about immigrants and refugees, that, in a way, makes it acceptable to the average person to say terrible things. She just encouraged the president to use his words kindly because it has been hard for her in the last year-and-a-half.

These kids are future citizens. Most of my students are refugees, which means they are on a pathway to citizenship. They have drive and ambition and dreams. The majority of my students graduate from high school. They go on to post-secondary education, and they are productive members of our community. We tend to have this divisive us versus them when really we're all together. We're all important. Our nation was started with immigrants, refugees really. That's the real heart of the United States. The real heart of the people is to be welcoming and open because we do know deep down we know that the more diversity that we have, the better off we will be. We will have the best ideas and the best outcomes and successes.

When people in positions of power convey negative messages about immigrants and refugees, that, in a way, makes it acceptable to the average person to say terrible things.”

Will you say any of this directly to President Trump when you see him at the White House?

I'm going to personally deliver the letters to him. Then also I have selected some key things that I think were really important for me to say to him. For example, one of my students wrote a poem about his experiences coming from Uganda. He talked about how he lived for many years without hope because he didn't have security that he would eat every day and all of those things, living in refugee camps and the danger that's involved in that sometimes. How coming to the United States was his hope. Now living here, it's like he has an opportunity to dream and to be the things that he wants to be.

I had another student who just wanted the president to know that he wants to be able to go to university because he wants to work in information technology. He wants to contribute to our society in a very positive way. He just hopes that there will be a pathway for him to be able to do that. So these are the kind of things I'm going to communicate to the president.

If we would just step out of our comfort zones, we might be able to see the beauty in our neighbors.”

What does the award mean to you?

I see it as this opportunity to be a voice for my students and their stories. My students are so deserving of this platform. For my colleagues as well, and for Spokane and for Ferris High School. I'm just very excited for this opportunity, and I'm also a little intimidated by it.

My whole thing is that I just want to encourage educators and community members and decision makers to really intentionally seek out experiences that will challenge their perceptions — that's when we find clarity. We need to step out and experience things beyond our understanding because when we don't understand something, we tend to fear it. If we would just step out of our comfort zones, we might be able to see the beauty in our neighbors. The world is a lot better when it's connected.