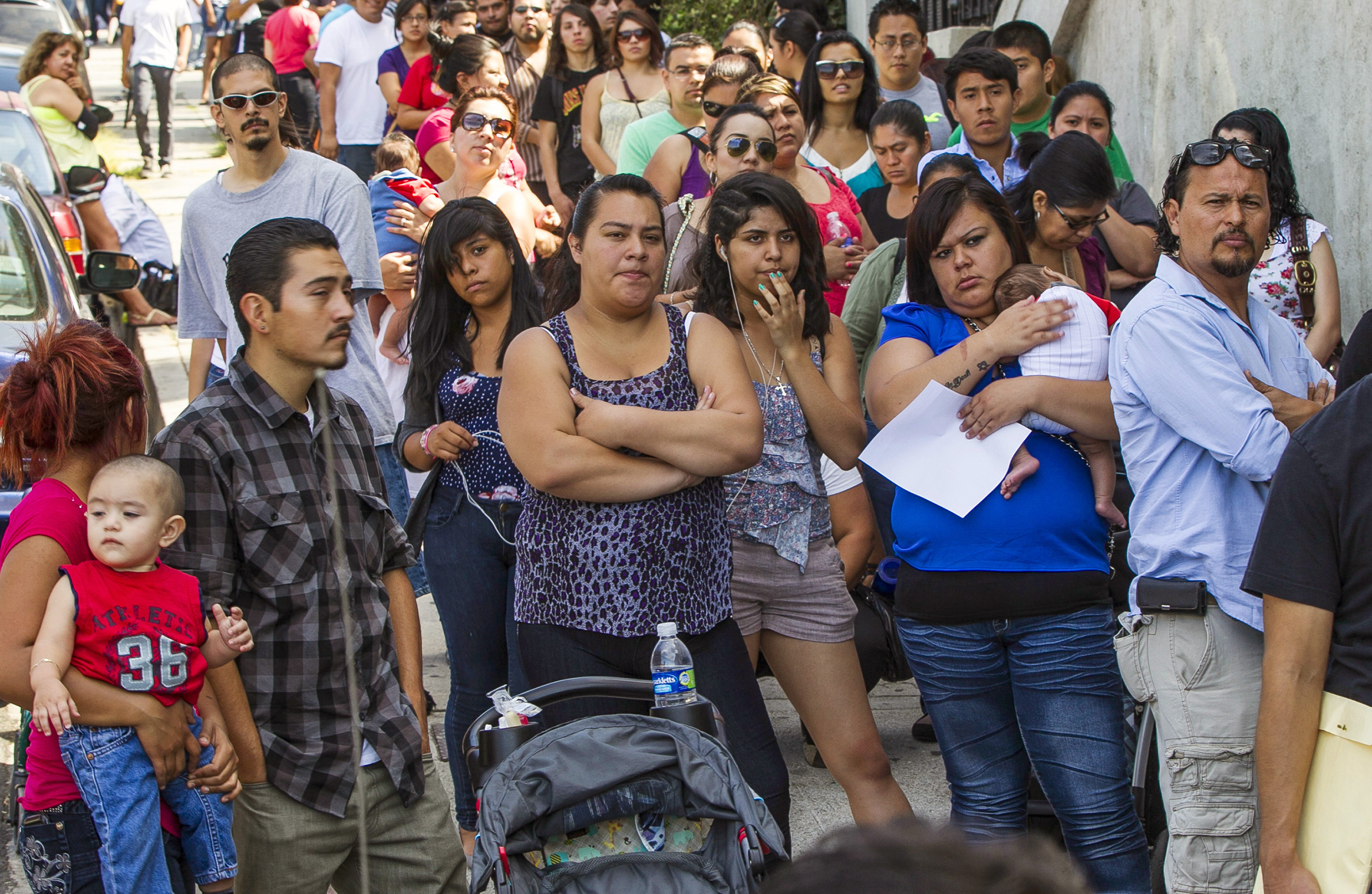 In this Aug. 15, 2012 file photo, a line of people living in the U.S. without legal permission wait outside the Coalition for Humane Immigrant Rights in Los Angeles. Washington state is joining California and others in suing the Trump administration over its decision to add a question about citizenship to the 2020 U.S. Census. (AP Photo/Damian Dovarganes)

“Donald Trump and his administration want to take the Census back to the 1950s with an unreasonable, unjust and unconstitutional proposal. Our state and city are united in fighting against this attempt by the Trump administration to stifle democracy and strip our community of much-needed resources,” said Mayor Jenny Durkan in a press release about the lawsuit.

“In the last decade, Seattle’s population has skyrocketed, which is why it’s critical the upcoming Census provides accurate and fair representation. Without an accurate count, Seattle could lose billions of dollars of federal investments in housing, schools, and hospitals, and other critical federal resources,” Durkan continued.

The federal government argues asking participants about their citizenship status will help enforce Section 2 of the Voting Rights Act, which aims to prevent voting-rights violations. In a statement, the U.S. Department of Commerce noted that "between 1820 and 1950, almost every decennial census asked a question on citizenship in some form" and that it had "determined that obtaining complete and accurate information to meet this legitimate government purpose outweighed the limited potential adverse impacts." The U.S. Department of Justice had requested the change to the Census in December.

The U.S. Constitution requires the government count the number of people living in the United States every 10 years. The data is used to determine the number of seats each state has in Congress. The population count, according to the lawsuit, is also used when determining how to distribute approximately $700 billion in funding for nearly 300 different Census-guided federal grant and funding programs.

In 2015, according to the press release, "Washington state received approximately $13.7 billion dollars from federal assistance programs based on decennial Census data."

In the lawsuit filed on Tuesday in U.S. District Court in the Southern District of New York against the U.S. Department of Commerce and the U.S. Census Bureau, plaintiffs argue that the decision to add the citizenship question is "unconstitutional and arbitrary" and "will fatally undermine the accuracy of the population count and cause tremendous harms to plaintiffs and their residents."

"Decisions to change questions on the decennial census typically take several years to test, evaluate, and implement; but defendants’ decision here was compressed into a hasty and unprecedented period of less than four months," the lawsuit states. "It will deprive historically marginalized immigrant communities of critical public and private resources over the next ten years."

The lawsuit also points to previous attempts to force the Census Bureau to ask Americans about their citizenship status. In 1980, for example, in response to a lawsuit seeking just that, the Bureau argued in litigation that “any effort to ascertain citizenship will inevitably jeopardize the overall accuracy of the population count.”

The Bureau explained that “[o]btaining the cooperation of a suspicious and fearful population would be impossible if the group being counted perceived any possibility of the information being used against them.”

The lawsuit argues the latest attempt to compel the Census Bureau to ask about citizenship is part of a larger "anti-immigrant climate" under the current federal administration that has seen the rescission of the Deferred Action for Childhood Arrivals, or DACA program; the ban on travel from several majority-Muslim countries; as well as a goal to build a physical wall along the Mexico-U.S. border, among other efforts.

Local reaction to last week’s announcement by the U.S. Department of Commerce that a question asking whether someone is a U.S. citizen would be included in the 2020 Census was swift.

Former Washington Governor Gary Locke, who headed the 2010 Census, called the decision to include the question “a crass political move to dissuade immigrants from responding.” Locke pointed out that an undercount could cost the state a seat in Congress and affect the Electoral College vote and ultimately, the selection of the next U.S. president.

“The Constitution says the Census is to count people here in the country,” Locke said, while pointing out that slaves were included in the first Census count in 1790.

King County Executive Dow Constantine called the decision to include the question "predictable, yet incredibly disappointing.”

“The Census is intended to count people, plain and simple. Any administration move intended to frighten some residents — citizens or not — into avoiding being counted is damaging to the long-term accuracy of the decennial count, and to our democracy,” Constantine said.

King County Council Chair Joe McDermott called it part of “another long series of attempts to intimidate people in our community and in this case, to punish those states, cities and counties that are welcoming immigrants and refugees.”

McDermott also noted that more than 20 percent of King County residents are foreign-born and that there is a “significant percentage of people who could be put off, intimidated and therefore decline to participate.”

Chandler Felt, a demographer for King County, said in the region alone there is a potential to undercount 488,000 foreign-born residents — or almost 23 percent of the county's 2,150,000 people. In 2014, according to the lawsuit, approximately 150,000 undocumented immigrants lived in the Seattle metro area. Felt said he worries that even those who are here on a Green Card, or by some other legal means, could shy away from the Census because “the Trump administration has been making noise even about legal immigration.”

Felt also pointed out that another questionnaire, the American Community Survey, which is sent to a small fraction of the population on an ongoing basis, already asks for more detailed information, such as citizenship status.

Among the government programs that could potentially be affected by an undercount, advocates say, is Head Start, which serves nearly 20,000 low-income children in the state.

Joel Ryan, executive director of the Washington State Association of Head Start and ECEAP, a statewide nonprofit advocating for high quality early learning, worries an undercount of immigrants — undocumented or otherwise — could mean some people would be underrepresented and that "the dollars that were going to California or Washington are going somewhere else.”

“It seems they are doing this because they are looking to cut funding for programs like Head Start,” Ryan said, noting recent reports that the administration is looking to penalize immigrants who use public benefits.

Ryan added that many Head Start parents are already nervous about the Trump administration’s “very aggressive immigration enforcement efforts” and have been hesitant to drop off kids at school because they've heard of others being picked up by U.S. Immigration and Customs Enforcement. Nearly half of the children served by Head Start in Washington state are Latino. Ryan said Latino children tend to benefit the most from the program because it affords them the opportunity to learn English in time for kindergarten.

“These are kids who could really benefit from having some help before they arrive in school, and they're not going to get it. It’s very scary,” Ryan said. Last fiscal year, Washington state received an estimated $159,907,243 for the Head Start program.

Washington Attorney General Bob Ferguson's office pointed to other programs that could be affected by an inaccurate Census count. The Highway Trust Fund, which provides funds to states and municipalities for road construction, is one example. In fiscal year 2015, Washington received over $663 million in Highway Trust Fund Grants.

In addition, the Department of Transportation utilizes population figures from the most recent decennial census to calculate the federal resources allocated to cities and states for planning, operating and improving transportation under its Urbanized Area Formula Funding program. In fiscal year 2017, Washington received over $145 million in Urbanized Area Formula Grants.

The Medicaid program relies on “per-capita income” information calculated with decennial Census data to determine the amount to reimburse each state for medical assistance payments on behalf of low-income individuals. In fiscal year 2015, Washington received $3.92 billion under the Medicaid program.

A 1 percent undercount on the 2010 Census would have resulted in losses of over $2 million in federal funding for the program, Ferguson said.