One study said there wasn’t a problem. Amid continuing worries, however, a new examination is about to start. 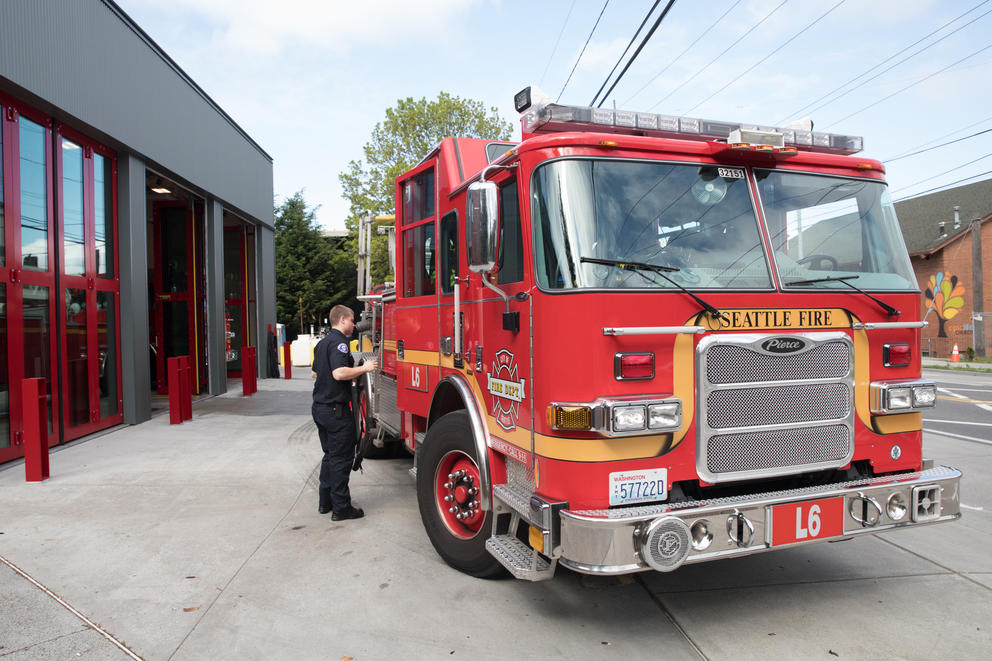 It might be easier if they knew for sure, but for now the firefighters of Station 31 can only suspect they’re being poisoned.

Blocks from Aurora Avenue in North Seattle, their aging station is among the city’s busiest — making it a “young man’s game,” quip several of the people posted there.

But if the work is for the youthful, a sense of mortality among the firefighters who live and work in the cramped quarters is never far off. And not because of fires or explosions — this is not Seattle’s fictional “Station 19” — but something slower moving: cancer.

The strange case of Station 31 was supposed to be closed. In the early 2000s, firefighters rang alarm bells about the number of people who worked in the North Seattle location and had gotten sick — as many as 25 in the immediately preceding years, Seattle Weekly reported at the time. A state Department of Health study concluded that, between when the station opened in 1975 and 2003, 119 of its resident firefighters became sick with cancer.

The story ballooned as the firefighters demanded an investigation into the root of the problem and accused then-mayor Greg Nickels of resisting. At one point, Station 31 Capt. Bruce Amer threatened to pitch a tent city outside the station in protest.

After years of back and forth, an environment consultant agency hired by the city concluded in a 2006 report, “The building as a whole appears safe for general occupancy.”

For the mayor and the general public, the conclusion seemed to cap the controversy and the issue largely disappeared.

But for members of the Seattle Fire Department, Station 31 has never shed its reputation as an unsafe place to work. In the years since the building was declared harmless, more current and former firefighters from the station have become ill. How many, no one can say; the accounting is anecdotal. But Capt. Mike Gagliano said in just the last year, three have gotten sick. To this day, it’s still known as the “Cancer House.”

As Capt. Duncan Jewell put it, “When it’s a bunch of people you know, it feels like a lot.”

Combined with the high call volume and stripped-down amenities, the fear of Station 31 is strong enough, said Gagliano, that convincing department employees to come and stay there can be a challenge. “People who have been here for a year rotate out," he said, occasionally telling him because they fear getting sick.

So, nearly 20 years after the issue was first raised, the Seattle Fire Department is revisiting the trend — real or perceived. Last month, Chief Harold Scoggins signed off on a comprehensive comparison between Station 31 employees and the rest of Seattle Fire Department dating back to the early 1970s. The department is partnering with the Fred Hutchinson Cancer Research Center and spending about $400,000 on the study.

Cancer haunts all firefighters, not just those in Station 31. Inside burning buildings, the heat opens a person’s pores by as much as 400 percent for every 5 degree temperature increase, which means gasses and chemicals that fill the enclosed space can find their way around respirators and into the skin. When fire-resistant materials — found in such things as baby mattresses — do catch flame, the chemicals are toxic. There’s residual asbestos in old rafters, which firefighters used to inspect without proper gear. There’s benzene, pumped into stations via fire trucks’ tail pipes, which accumulated before better exhaust systems were installed.

Most common are non-Hodgkin Lymphoma, lung cancer and prostate cancer.

Protocols for firefighting operations have steadily improved since the late '90s, according to Scoggins, and building codes mean fewer toxic chemicals baked into the walls at fire scenes.

But cancer risk is an impossible issue to eradicate — plastics and petroleum-based products are more common than they once were. And for those who were fighting fires in the ’80s and ’90s, exposure may not show up until many years later. Between 2001 and 2012, some 60 percent of firefighter deaths nationally were due to cancer, according to Kenny Stuart, president of the Seattle firefighters’ union, IAFF #27. Congress is currently considering the establishment of a national system to track firefighters' mortality from cancer. “We’ve got a pretty high sensitivity,” he said.

And yet, even in a population with higher than normal cancer rates, Station 31 stood out. When it was first raised, firefighters pointed to mold in the building, an unpaved basement with metallic flecked dirt, a chalky dust flaking from the walls.

Testing at the time and in subsequent years has turned up somewhat high levels of lead and certain bacterias, although not enough to tie them directly to cancer cases. The station has had retrofits in response — cementing the downstairs basement and plugging water leaks that make the station more prone to mold.

The department has not run tests on the building itself for a few years while they were constructing an addition for an aid car, but officials plan to again shortly.

When the issue first came up in the early 2000s, it morphed into a political fight. Stuart compared it to Nickels’ now infamous headache when he declined to salt the roads in a snowstorm. Because it was marred with so much tension, even when results came back, people in the department were not convinced.

“I don't think it would've come up again if we would have answered the question the first time and I think we have to put the work in to do that,” said Scoggins, sitting at a hand-carved table near Station 31’s kitchen.

Amid change in department leadership and city hall, firefighters began raising the issue again. For his part, Gagliano actually believes the testing done on the building has been fairly comprehensive. But amid the continued drumbeat of sickened firefighters and a broader perception that the city doesn't care about the station's conditions, he understands why employees are slow to accept past findings. “It could be that once the perception is there, it keeps on building," he said. But the only way to put it to bed is to get a comprehensive look and Gagliano's fought for that. "My job is to take care of these folks," he said.

Since Scoggins was named chief by ex-Mayor Ed Murray, his rank-and-file appreciate that he’s heard their concerns. “The fire chief and mayor’s office have been supportive to really take an honest and robust look at this potential,” said Stuart.

Scoggins said the study with Fred Hutch is taking longer than he’d hoped, largely because the department was not budgeted the $400,000 necessary to run it. “We had to find the funding,” he said. But Scoggins said they worked hard to come in under budget in 2017 and made the request toward the end of last year. It was approved.

The first phase of designing the study has already been completed. But the challenging phase of actually carrying it out hasn’t begun yet.

Where before researchers compared the station’s cancer rates to national rates of cancer, the Fred Hutch study will compare them to cases specifically within the Seattle Fire Department.

This could prove complicated. The department will need to get permission to access medical records of every employee between when the station was built in the 70s and today. For retired and deceased employees, even making contact will be challenging.

For a group of people who signed up to stand on rooftops and enter burning buildings, there’s a palpable fear among firefighters of the incremental damage the job brings. Add to that the feeling that their own station — where they retreat to after high-adrenaline calls, which they call home — may also not be safe and the reasons for why, after nearly 20 years, this one issue persists come into focus. Just showing interest will earn you a handshake.

When asked how often he thinks about it, Scoggins, whose parents both died of cancer, said, “Every day … it's tough watching someone go through it.

“So you want to make it as easy as possible. And if you got in the line of duty, you want to be able to say that and acknowledge that and hopefully, the family members will be taken care of a little bit better because you got it serving others.”