Case workers: ‘A paycheck away from being homeless themselves’ 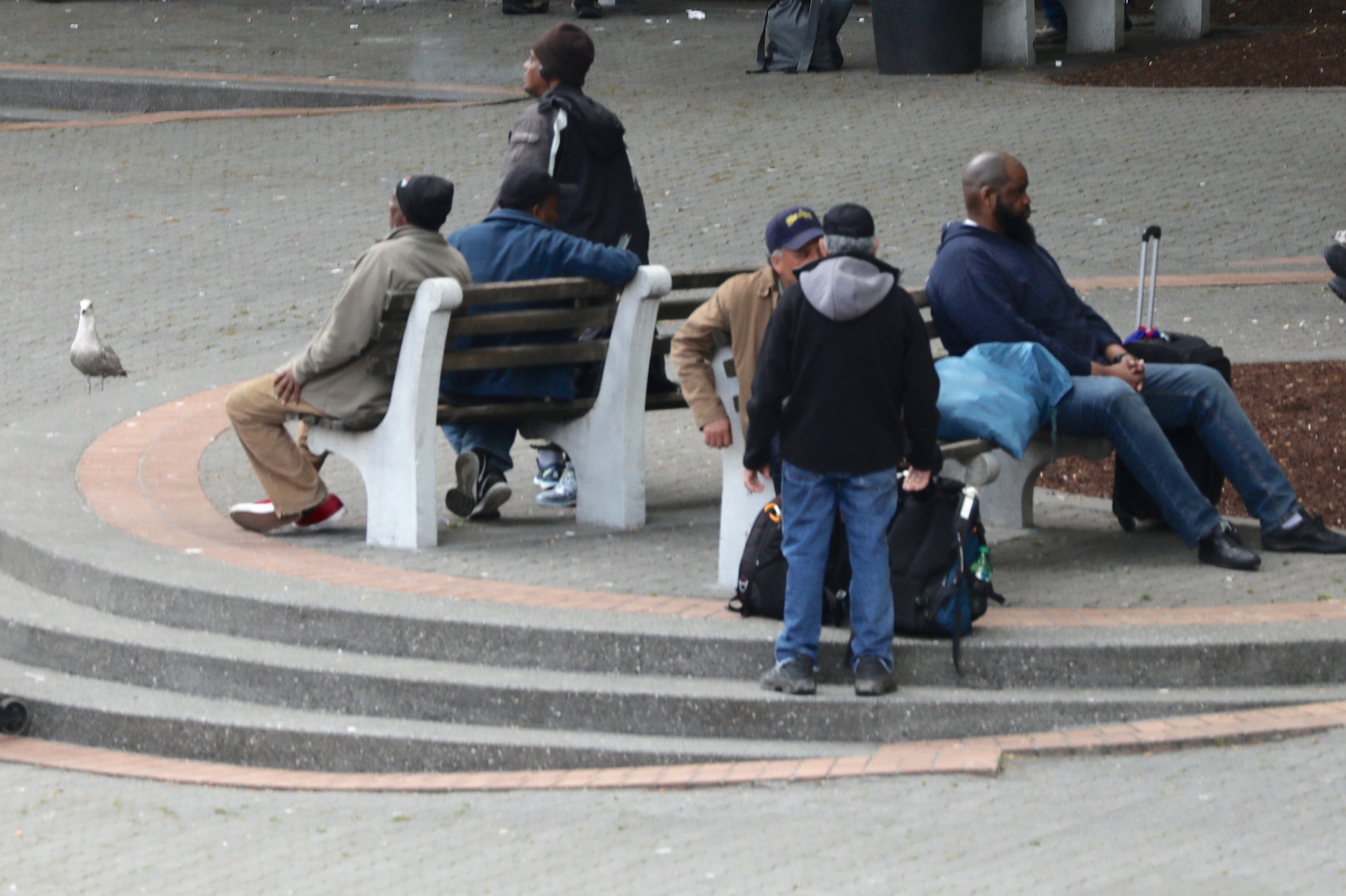 A scene near the Downtown Emergency Service Center in Seattle on the evening of Thursday, May 3 (Photo by Matt M. McKnight/Crosscut)

Katelyn Morgaine catches herself sometimes dreaming of a house near Lake Washington or eating the restaurant meals she once enjoyed in her previous life as a lawyer. But she knows those became fantasies years ago, when she jumped from the world of insurance defense litigation to social-services case management, where she now triages a caseload of more than 40 clients — who live on the streets, in shelters, in their cars — for a salary of less than $40,000 a year.

Money aside, direct service is the job Morgaine figures she should have had from the start. The work is rewarding, she loves her coworkers and, at the end of the day, she feels close to her activist roots. Asbestos litigation never offered that.

But this second career of hers pays nearly $60,000 a year less than her first. Gone is the security she once enjoyed while living in Belltown. Now, to live in Seattle and still do the work she does, Morgaine must be creative. “My joke is I live off of the kindness of family members,” she said in a downtown coffee shop, blocks from the Downtown Emergency Service Center where she works. “I'm currently living with family members in Ballard and our extended family and, of course, they're not charging market rate rent. If I didn't have that I'd be struggling hand to mouth like my coworkers.”

Tucked into a growing list of thorny issues related to homelessness — encampments, people living in cars, lack of affordable housing — comes this one: constant turnover among service providers, spurred by abysmal pay for challenging work. It's, in part, a self-inflicted wound on the part of the city, that the Seattle City Council has discussed now for months. Last November, they authorized a comprehensive look at wages among contracted nonprofit service providers; a report is due this summer.

Morgaine’s been with Downtown Emergency Service Center (DESC) since 2012, which makes her an exception in a workplace that last year saw 50 percent or more turnover but also gives her keen understanding of the issues for both her co-workers and her clients. She credits her thick skin and commitment to the work for keeping her in the job. But she acknowledges that, for colleagues, the situation can be untenable.

“Most people are probably living in situations that they wouldn't otherwise choose,” she said. “What I've heard from my coworkers is that there are people who are living with partners that if they felt they didn't have the financial pressure that they have, they would not necessarily be in that relationship anymore.”

Many of her colleagues live in low-income housing, sometimes in the same building as their clients.

In a field like case management, where providers traffic in trust and relationships, turnover can be devastating. Morgaine describes how, like a misused antibiotic, people who cycle through case manager after case manager build a resistance to cooperation. They become cynical.

“It takes time to form relationships with people,” said Daniel Malone, executive director of DESC. “That gets interrupted when a staff person leaves.”

What’s worse, many of the people living outside already come from a place of trauma, often during childhood, be it emotional, physical or sexual. For those already wary of attachment, the ghosting of a case manager only reinforces that trust is not valuable.

At DESC, entry level employees who work inside the provider’s support centers — and therefore often with clients in crisis — earn between $15.45 and $16.45 an hour. Case managers like Morgaine don’t fare much better, earning between $17 and $19.25 an hour, said Malone. Compared to government wages for similar work, that’s little more than half the pay. As housing prices continue to go up, the wages have not.

When the turnover comes, it tends to happen in waves. A case manager leaves from the service provider. Because wages are so low, finding a replacement routinely takes two, even three months. In the meantime, that person’s clients are divided among the remaining employees, adding up to 15 new clients to their portfolios.

With the new work on top of their old, the slim salary perhaps does not look so good, especially for those struggling to repay loans on their master's in social work or afford somewhere to live in Seattle. Where one employee left, others begin to follow.

And, perhaps more than the extra stress, case managers have a way of depending on each other for support in a challenging job that few understand. When pieces of their team leave, the separation anxiety is strong, said Morgaine, and the departures cascade.

Meanwhile, the clients are passed from person to person until the new hires arrive and the cycle begins again.

At DESC, turnover among case managers last year was about 50 percent; at its more intense outpatient mental health program, it was closer to 60 percent, which means the organization is hiring all the time. The average length of employment hovers around 18 months, said Morgaine.

The job has always been difficult, but the intense turnover has gotten especially bad in recent years, Malone said. “We’re tracking it closely because it’s become a problem for us in the last few years in particular,” he said.

The increased rate of turnover is not just a Seattle problem. Nonprofits nationwide have seen their turnover rates increase, especially in direct service positions. No other city, however, has seen its housing prices and homeless populations jolt upward as severely as Seattle's.

But increasing employee pay is not so simple. DESC and similar providers depend on a number of revenue streams to pay their employees, including Medicaid allocations and funding from the city of Seattle. Because those are largely fixed, resources are zero-sum, meaning increases in pay mean decreases somewhere else.

It’s a near impossible scenario considering the state’s focus on quantity of clients and an increasing homeless population that has reached nearly 12,000 in King County. Employees are already so overworked, Morgaine said; it’s not a question of whether she’s behind, it’s what she chooses to be behind on: daily logs one day, then the reports to the county another, then clients’ paperwork another.

The city government, by and large, understands this is a problem, one of many related to homelessness it needs to tackle. In the highly contentious proposed tax on businesses, a portion of the $75 million a year it's estimated to raise would go toward increasing provider wages.

The evidence so far may be anecdotal, but Malone said he’s sure DESC’s situation is the norm. Still, to capture a more comprehensive picture, the Seattle City Council last year asked the city’s Human Services and Human Resources departments to collect wage data of service providers and city workers to compare to one another.

Further, Councilmember Mike O’Brien’s office has convened a series of meetings with service providers to better understand the scope of the problem. They’ve met three times so far and a report is due Aug. 1.

“If we want to have the best human service providers in the country doing the most innovative work, doing the work that moves more people off the street and into shelter and out of shelter into permanent housing as swiftly as possible, we cannot do that on the backs of these poverty wages,” O’Brien said in a budget meeting last year. “It’s hard to imagine someone solving the homeless crisis when they themselves are just a paycheck away from being homeless themselves.”

It’s difficult to know how much of an increase in pay would stem the tide. Morgaine suggested a 20 percent bump, while Malone said closer to 50 percent.

In the meantime, as Seattle struggles desperately to control the homelessness and housing crisis, the low pay and high turnover is making City Hall’s job harder. “It’s one additional factor,” said Councilmember Teresa Mosqueda, “that I think is harming our efforts to stabilize individuals and get them into the housing they need.”