The council will consider the tax to fund homelessness services and new housing on Monday. 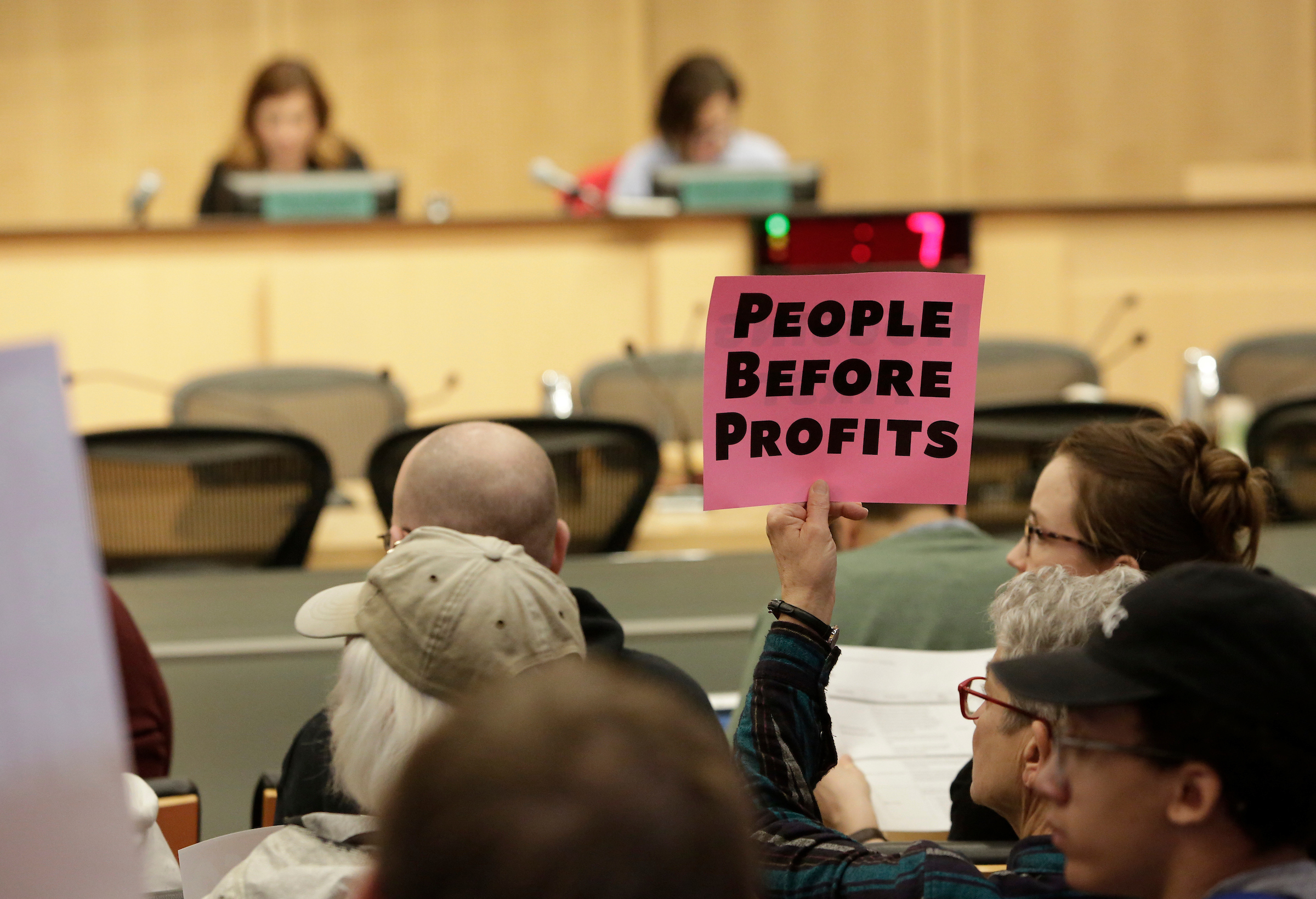 People hold signs in favor of a business tax during a Seattle City Council special meeting of the Finance and Neighborhoods Committee Friday morning in Seattle, May 11, 2018. (Jason Redmond for Crosscut)

After a dramatic display of real-time legislating, the Seattle City Council voted to advance a hotly debated and highly contentious tax on large businesses that would raise $75 million for housing and homelessness. The 5-4 vote tees up the measure for final approval on Monday.

If the full council votes on the measure as it’s currently written, Mayor Jenny Durkan said she would not support it, signaling a veto.

The approval of the tax — $500 per employee for companies with revenue over $20 million a year — came despite a last-minute attempt by Durkan and four city council members, Sally Bagshaw, Debora Juarez, Bruce Harrell and Rob Johnson, to offer a compromise that halved the proposed tax and included a sunset clause after five years.

But that compromise, as its supporters called it, failed to sway any of the five council members who favored the higher tax. Durkan wanted to steer the bulk of money raised toward paying for emergency solutions, like shelter beds and garbage cleanup. Her proposal projected creating only 250 new units of affordable housing over the next five years — a fraction of the 1,700 affordable housing units the $75 million tax measure proposes.

“An additional 50 housing units a year, just to me, falls woefully short of what we need as a community,” said Councilmember Mike O’Brien, one of the four original sponsors of the $75 million proposal. “We need significantly more housing and I don’t think this gets us there.”

When the council rejected Durkan’s option and approved the original proposal, the pro-tax crowd that filled the council chambers Friday was elated. “We’ve got to have as much money as we can get because there’s too much need to ignore,” said Katelyn Morgaine, a casework with the Downtown Emergency Service Center.

But the celebration of the tax’s approval was short-lived. The five “yay” votes are not enough to override a mayoral veto.

In a statement Friday, Durkan forecast that she would indeed veto the measure unless the council could offer something different. “Unfortunately, the bill that passed out of committee hurts workers by stopping these good jobs, so I cannot support it,” she said.

If she does veto the $75 million tax proposal, the council will either need to return to the negotiating table or move forward without any new tax.

At stake in the debate is a homelessness and housing crisis that is out of control. At last count, there were 11,600 people on the streets or in shelters. A recent report from McKinsey consulting estimated the county would need $400 million a year and an extra 14,000 affordable units to ease the pressure.

Speaking before the council, Michael Ramos, Executive Director of the Church Council of Greater Seattle, said the council should reject the "false choice between wealth and justice" and approve the tax. "Be not afraid," he told the council. "Stand up for our neighbors in need."

But others feared the higher tax would, in fact, hurt jobs. "People are building here and we’re seeing an uptick in our membership in middle class," said Monty Anderson, Executive Secretary of Seattle Building Trade. "Don't take that away from us." Anderson supported Durkan's proposal.

Friday’s committee meeting unfolded in fits and starts, with council members searching for, but struggling to find, a sweet spot that at least six out of the nine council members could support. Complicating the process was the speed with which the new proposals and amendments were introduced.

Councilmember Lorena González, a supporter of the original bill, complained at one point that she had only just received the mayor’s option. “I am just absorbing the counterproposal, this amendment, for the first time,” she said while reading a piece of paper in front of her.

Details of the proposed business tax:

At several points, the sponsors of the original $75 million tax seemed open to a slight reduction if it meant its passage was more likely. But what sunk the Durkan proposal was its focus on shorter-term measures for homelessness versus permanent affordable housing.

Councilmember Lisa Herbold pointed to a recent audit that found slow churn among residents in King County shelters, a problem the audit blamed on a lack of affordable housing. “We support making investments in shelter services, but the problem is there’s not throughput from homeless services to housing,” she said. “People are sitting with a rapid rehousing voucher for six months, but they can’t use it because there is not housing,” she added, referring to a form of temporary rental subsidy in the private market.

O’Brien said that while he preferred a $500-per-employee tax, he was willing to accept a $350-per-employee measure if it meant gaining a sixth vote or more to protect the proposal from a veto.

Therefore, after three hours of discussion and public comment, the council members ended where they’d begun.

The council now has a short weekend to try and cobble together a measure that can win six votes to avoid a veto. Their room for negotiating, however, is narrow. Speaking after the vote, Sawant said she would force Durkan to veto a higher proposal before she would agree to something smaller.

“I would urge the City Council — especially the council members who voted yes on this $75 million tax on big business — to stand strong and call Mayor Durkan’s bluff,” she said. “If you want to veto it, you have to do it in the light of day in front of all the people who voted for you.”

But Councilmember Harrell left similarly little space for negotiation. “I’m trying to get a deal where I can get seven or eight council members behind and not a veto,” he said after the vote. But he confirmed that he would not support a $350-per-employee tax.

That leaves the four sponsors of the original bill — González, O’Brien, Herbold and Teresa Mosqueda — in a grey area of sorts. Speaking together in an upstairs City Hall room after the vote, they seemed to reject Sawant’s inclination to force a veto and said they would continue to work to find the votes. “We favor good governance,” said Mosqueda.

Lingering in the background: Amazon, which, in response to the proposed tax, threatened to halt construction on one building and sublease another. After Durkan unveiled her proposal, the company reportedly withdrew its threat. But now that the mayor's offering is dead, what the company does moving forward depends on Monday's vote, scheduled for 2 p.m.