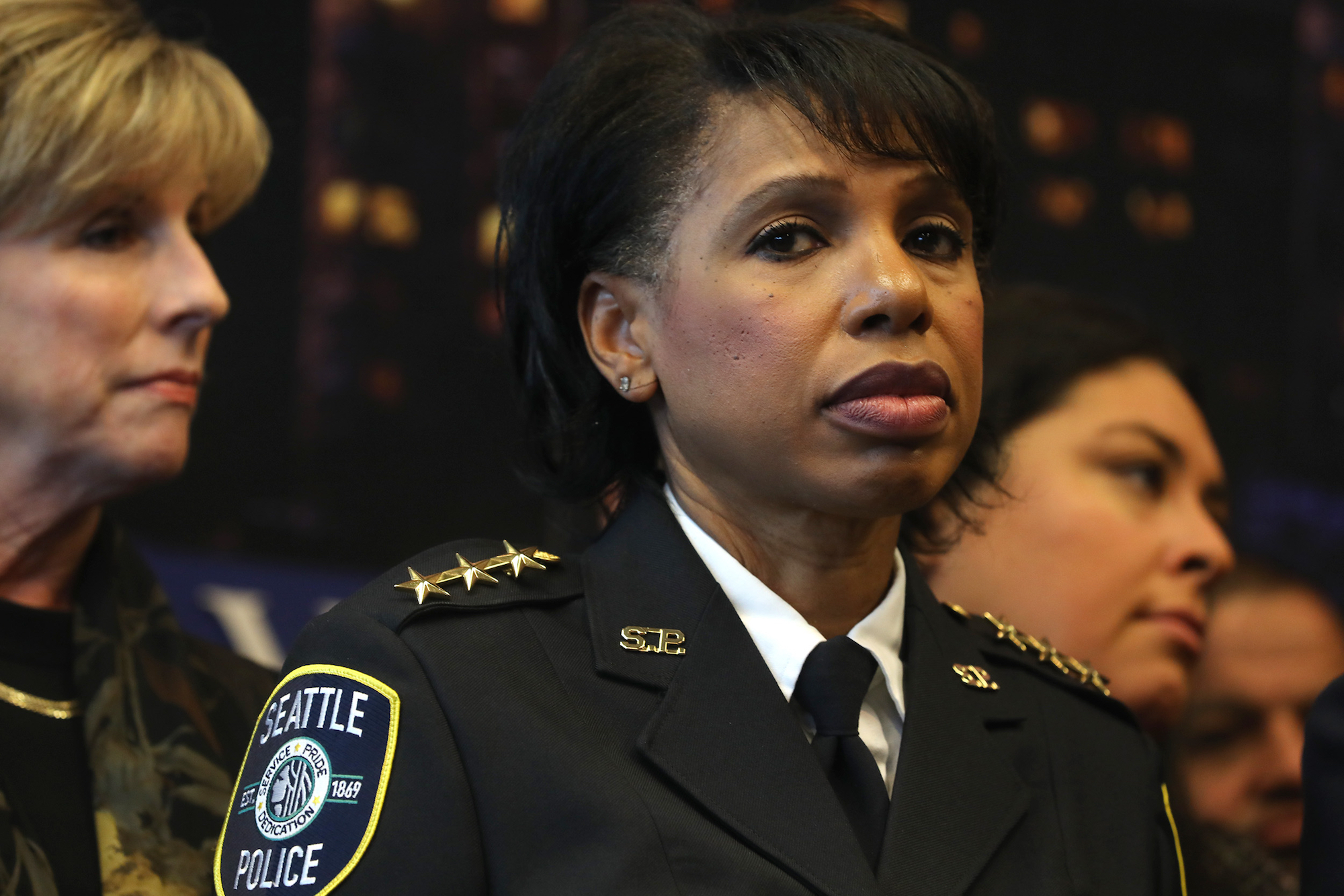 Acting Police Chief Carmen Best at a news conference on Dec. 7, 2017, when it was announced she would be serving in the position that Kathleen O’Toole stepped down from starting Jan. 1, 2018. (Photo by Matt M. McKnight/Crosscut)

As the rest of City Hall went home for a long Memorial Day weekend, some members of the mayor’s Police Search Committee continued venting until nearly 10 p.m. Friday night, expressing their frustration and anger with the choice and announcement of the three finalists for Seattle police chief.

That frustration boiled over into the weekend, with members of the Community Police Commission, Seattle's civilian police advisory body, requesting documents from Mayor Jenny Durkan Sunday related to the selection process.

There were several issues. Most salient was the final step of the process. After months of work, 25 handpicked members of the committee had put forward five names for chief, including interim Chief Carmen Best.

But that five was cut to three by a separate group of formal and informal advisers to Durkan, none of whom were on the original search committee. That group's role caused a simmering concern until Friday, when it exploded into outrage after Best was passed over as a finalist. The finalists are Ely Reyes, assistant chief of Austin Police Department in Texas, Cameron S. McLay, former Chief of Police for Pittsburgh, and Eddie Frizell, inspector at Minneapolis Police Department.

To make matters worse, the news release sent by the Mayor’s Office minutes into a 2:30 p.m. press conference seemed to imply the final three were the only three put forward by the search committee. “After extensive community outreach and a thorough review of many highly qualified applicants, the Police Search Committee and process forwarded to Seattle Mayor Jenny A. Durkan three candidates who best meet the community's requirements for Seattle's next Chief of Police,” it read.

In her statement, City Councilmember Lorena González struck a similar tone. “As a member of the Police Search Committee, I’m proud of the work we did to find three superb candidates that have a vision for and commitment to ongoing reform and culture change within our police department,” she wrote.

Although the process was laid out in a Friday press conference, for the members of the search committee who were upset by Best’s exclusion, the implication was a betrayal.

“I want to express my disappointment with the wording of the press release that was issued regarding the selection process,” wrote Jorge Barón, executive director of the Northwest Immigrant Rights Project, in an email thread provided to Crosscut by one of the members of the committee. “I believe the release conveys the erroneous impression that the search committee forwarded to the Mayor ONLY three finalists and makes no reference to the fact that there was an additional step in the process that did not involve the committee.”

Louise Chernin, another search committee member and CEO of the Greater Seattle Business Association, said she was receiving angry calls in the aftermath of the finalists’ selection. “I have already received a number of angry calls and, of course, am doing my best to stay positive, but this press release was very hurtful,” she wrote.

Rev. Aaron Williams was the most scathing. “Each committee member represents a larger constituency of people in the community that we will have to give an answer to,” he wrote at 9:40 p.m Friday. “To have the statements of a few people on the committee to misrepresent the many is greatly troubling to me. Consequently, our integrity and honor will be brought into question by people who trusted and relied on us to ensure that their voices were heard and due process was carried out in the search. Those of us who served on the police search committee worked very hard to ensure the integrity of the search process. To see it derailed by hidden agendas is very troubling to me. The co-chairs owe this committee a public apology. We were counting on you to represent us on Friday at the press conference in a spirit of honesty and integrity.”

There was also frustration with how a behind-the-scenes voting process factored into the selection of the three finalists. The Seattle Times on Friday cited two unnamed sources saying McLay, Frizell and Reyes had received the most votes of the five finalists. A source with the Mayor’s Office confirmed this over the weekend, saying in an early round of voting Best received the fewest votes.

Additionally, Councilmember González, responding to Baron’s concerns, wrote, “If memory serves me correctly, [McLay, Frizell and Reyes] were also the three that received the highest number of votes from the Search Committee for advancement.”

But several committee members rejected the idea that the voting process was formal. “I also want to make sure we don't refer to # of votes for each candidate since we made it clear there were no rankings,” wrote Chernin. “In fact, we made a decision not to do a revote after our lengthy discussion because we said # of votes were irrelevant.”

Search committee member and co-chair of the Community Police Commission, Enrique Gonzalez, wrote something similar. “Councilmember González has already attributed ‘ranking’ to the candidates in her response to Jorge [Baron] and that deeply worries me,” he wrote. “So on top of the process being vague and secretive, I worry that talk of ranking undermines what we agreed to; that we would not assign ranking.”

In explaining why Best was not among the finalists, former Mayor Tim Burgess, who co-chaired the committee, said in Friday’s press conference that he and others felt the department still needed someone from outside Seattle.

“While the police department has made tremendous progress in reform, there’s still a lot of work yet to do, including some of the foundational cultural reform that has yet to take firm root,” he said during the news conference. “And we felt that it was best at this point for an outsider to be brought in as the next chief.”

In a memo delivered to Mayor Durkan on Friday, the co-chairs of the committee also expressed displeasure with issues they felt had gone unaddressed by SPD management: Supervisors were not being held accountable; officers and detectives are inconsistent in the quality of their work; and SPD lags behind other departments when it comes to “the rigor of crime analysis, concentrated deterrence strategies for high frequency violent offenders, and addressing biased policing and disparate enforcement impact.”

The memo never blames Best or explicitly calls for bringing in an outside candidate, but the implication is that current management has let these problems slip.

But following the Friday press conference, Enrique Gonzalez disputed Burgess’ assertion that the committee necessarily wanted an outside chief. “If that is true, which it’s not, then why would we have considered Carmen as one of our five final list?” he told Crosscut in an email. “At the very least the committee did not agree on a position either way and saw the pros and cons of having someone from the inside as well as from the outside. Tim Burgess is not speaking consistently with what the committee said they wanted and it’s deeply concerning.”

Best, a 26-year veteran of the department, came into the process a well-known member of the community and with tremendous support both inside and outside the department. Her failure to be among the finalists appears to be uniting a very divided Seattle in surprise.

Former Councilmember Kirsten Harris-Talley, a longtime community organizer, was lobbying friends Saturday to call Durkan and others and urge them to include Best. On Twitter, 2017 mayoral candidate Nikkita Oliver tagged Durkan and Gonzalez and wrote “This racist mess will not stand. Are you that uncomfortable with black people, let alone a black womxn, being in a position of influence?”

A Community Police Commission member, Lisa Daugaard, said on Facebook that the group had requested an array of documents from Durkan related to the selection process and expressed hope that Durkan would intervene. There will be a media event Tuesday calling for more "fairness and transparency" and asking for a re-do on the entire process. "Presumably it's not too late for the Mayor to correct the process irregularities and ensure that this ends better than it started," she wrote.

Kevin Stuckey, president of the Seattle Police Officers Guild, said Friday he too was disappointed.

Councilmember González and legal counsel to the mayor Ian Warner agreed their press release should have been more clear and offered revised statements. “We are working now to update the release consistent with the concerns expressed here, including the modified quotes,” wrote Warner.

Spokesperson for Durkan, Stephanie Formas, attempted to smooth over anger. “As I noted earlier, we did share additional details regarding the process with quite a few reporters in addition to the update to the release,” she wrote to the committee members. An updated version of the press release, which was posted to the city’s website but not sent to reporters, was more specific in how the process worked.

Additionally, on Friday she forwarded to reporters several internal documents in an effort to clarify the process by which the final five, then three, were chosen.

When reached Sunday, Formas pointed to her emails to committee members as well as the memo drafted by the committee co-chairs.

But for some, it was too late. “Let me be clear,” wrote Rev. Williams. “What has been written and read publicly cannot be totally corrected and taken back. Once it’s out there, it’s out there.”

Correction: An earlier version of this article stated that the Community Police Commission was hosting the media event on Tuesday. Commission members will attend, but it is not a CPC event.