Meet the Faroe Islander behind the airborne showstopper 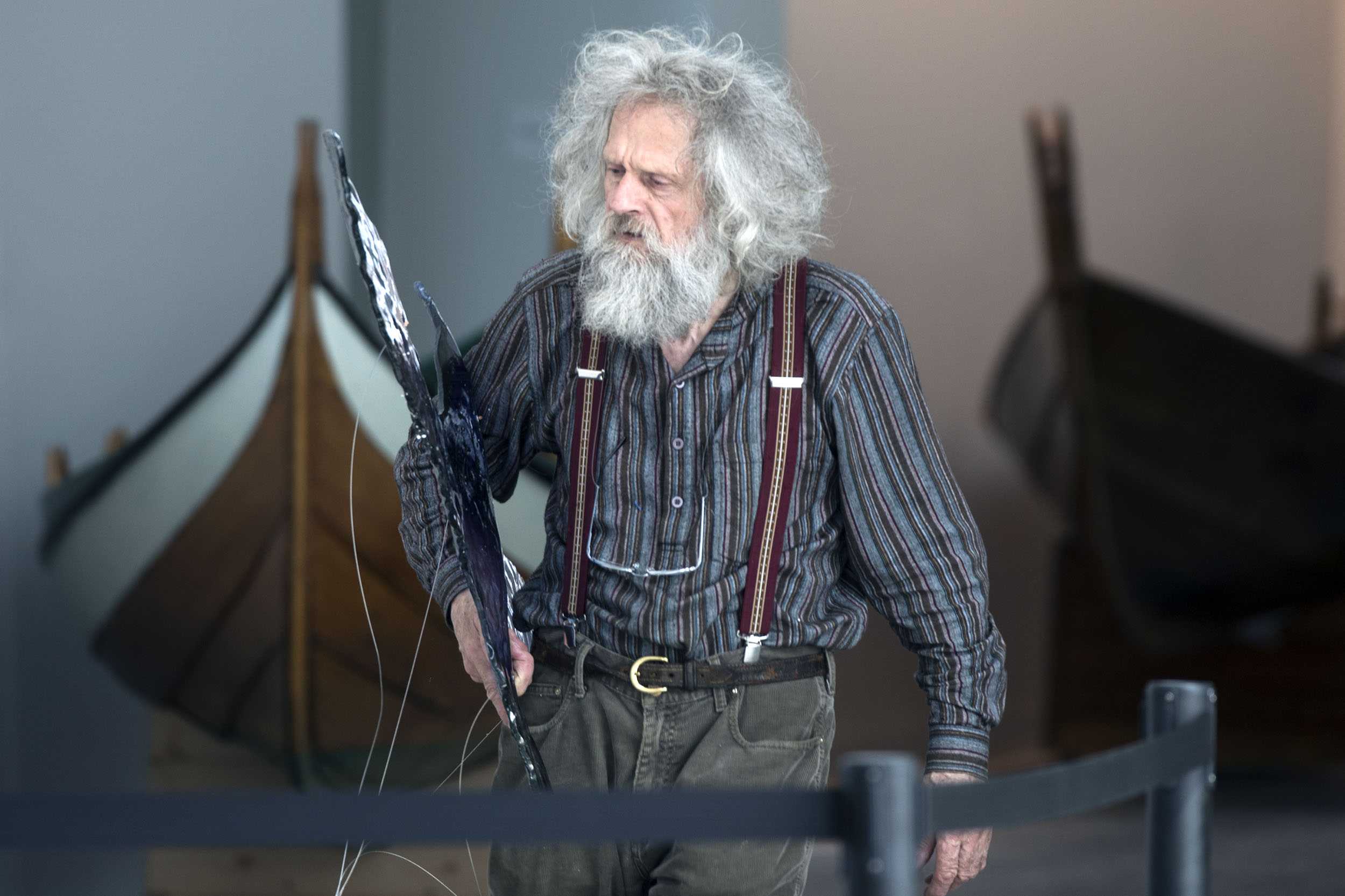 Twenty-one minutes. Had Faroese artist Tróndur Patursson been born 21 minutes earlier, on the first of March in 1944, he would’ve beaten his twin brother out of the womb, earned the title of eldest son and continued a 17-generation tradition of running the family farm.

But as a second son, he was free — to become a fisherman, sailor, painter and world-renowned glass artist.

The tiny archipelago is defined less by where it is than what it’s between — between Iceland, Scotland and Norway, between the North Atlantic and the Norwegian Sea. An autonomous country within the Kingdom of Denmark, it may have been first settled by Irish monks in the 6th century. By the 800s, Norsemen had put down roots. It has a population of about 50,000 humans and far more sheep. (The island chain made a bit of a splash in 2016 when, neglected by Google Street View, residents strapped 360-degree cameras to numerous wooly ruminants and created Google Sheep View.)

Nordic Museum executive director Eric Nelson traveled to the Faroe Islands in 2016, as part of a trip to get input on the new facility from Nordic cultural partners. “I had heard about Tróndur’s work in 2013, when he was part of the Nordic Cool exhibit at the Kennedy Center in Washington, D.C.,” Nelson recalls. But he hadn’t seen the art in person until this visit, during which he was able to visit Tróndur in his studio, housed in a 900-year-old structure with a spectacular view of grassy tundra and surrounding sea. 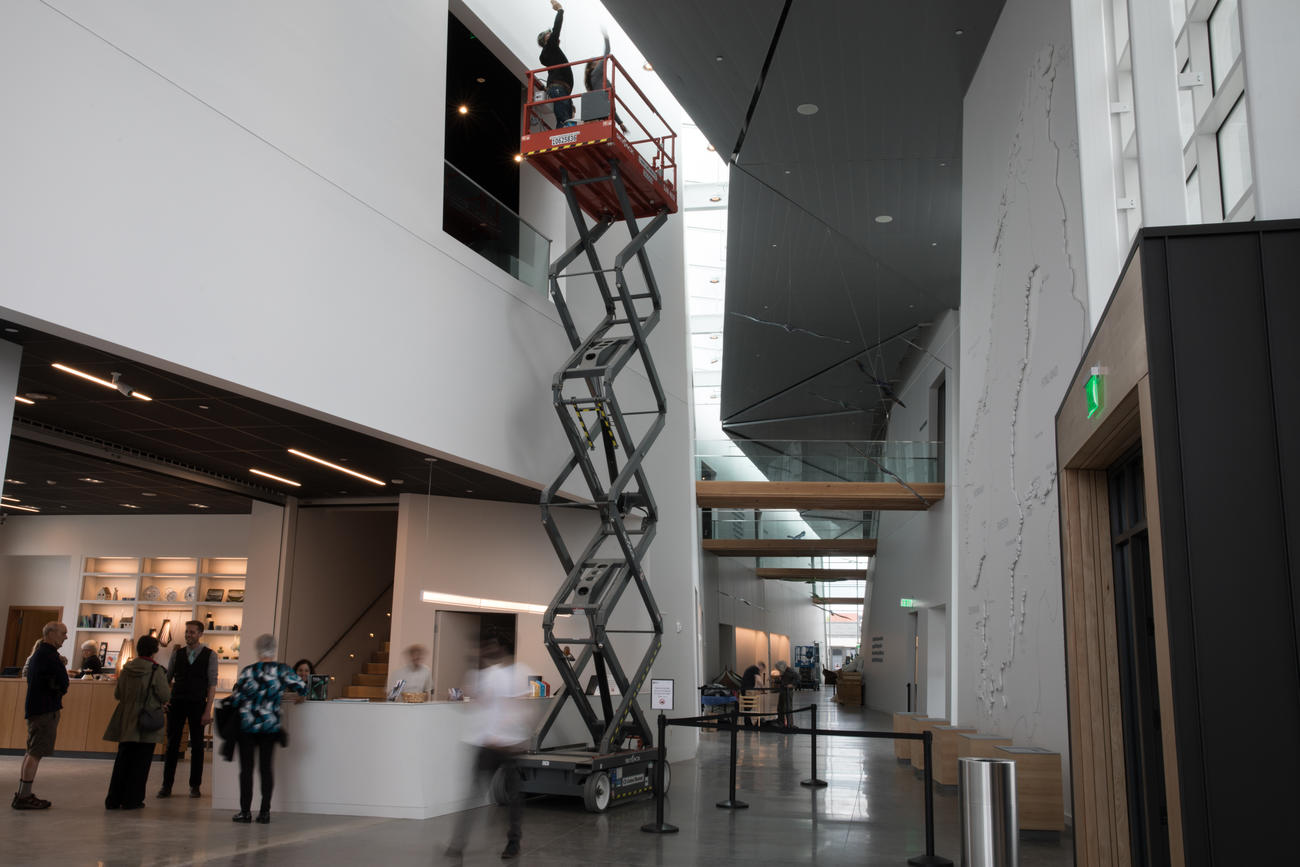 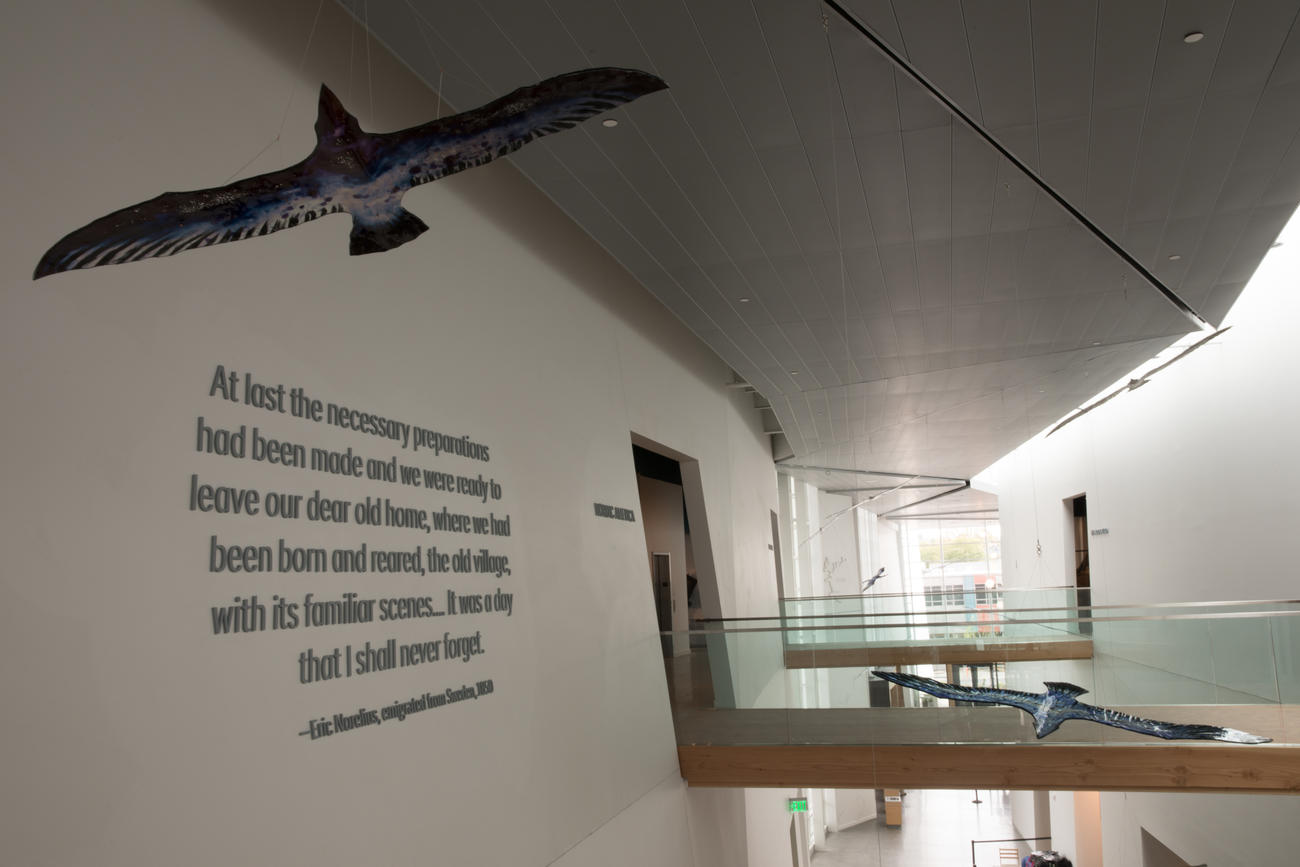 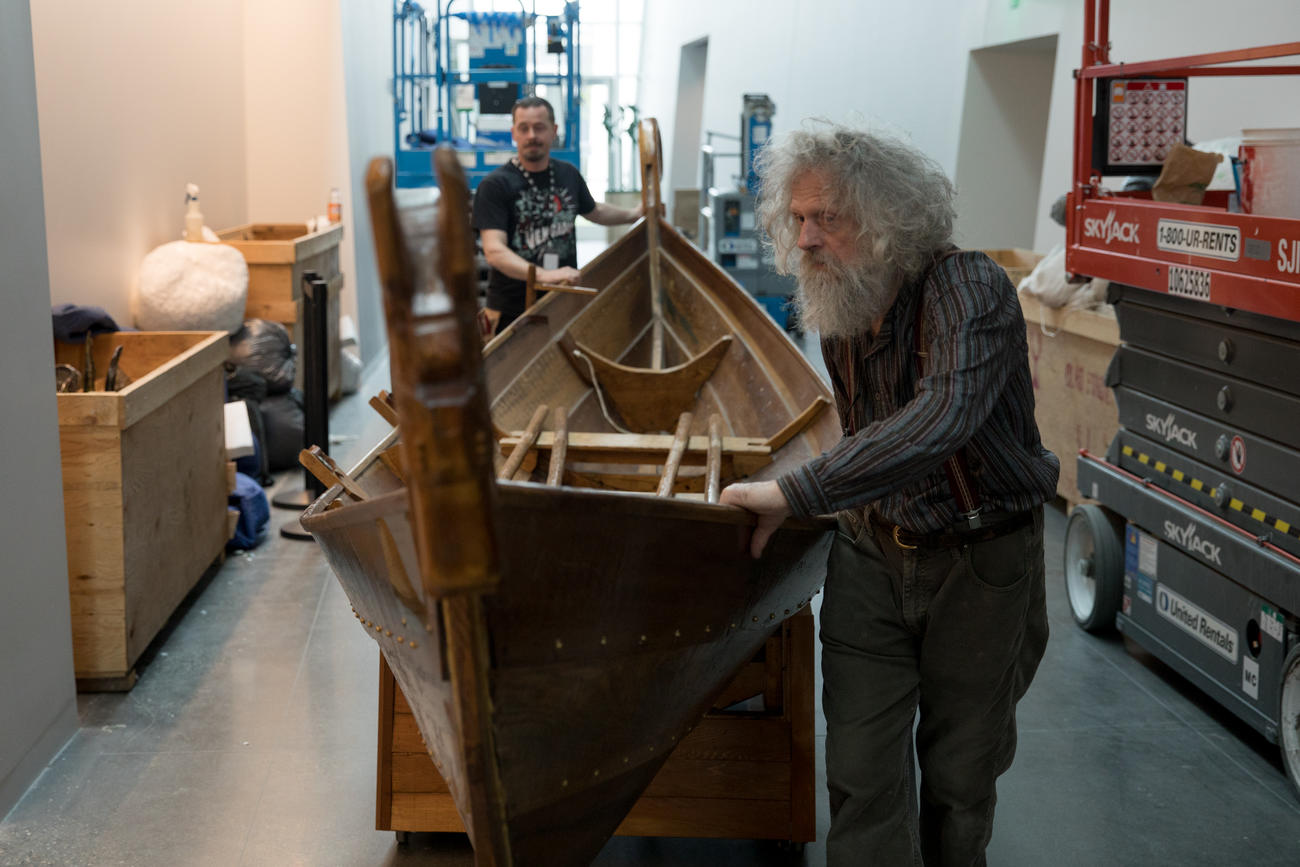 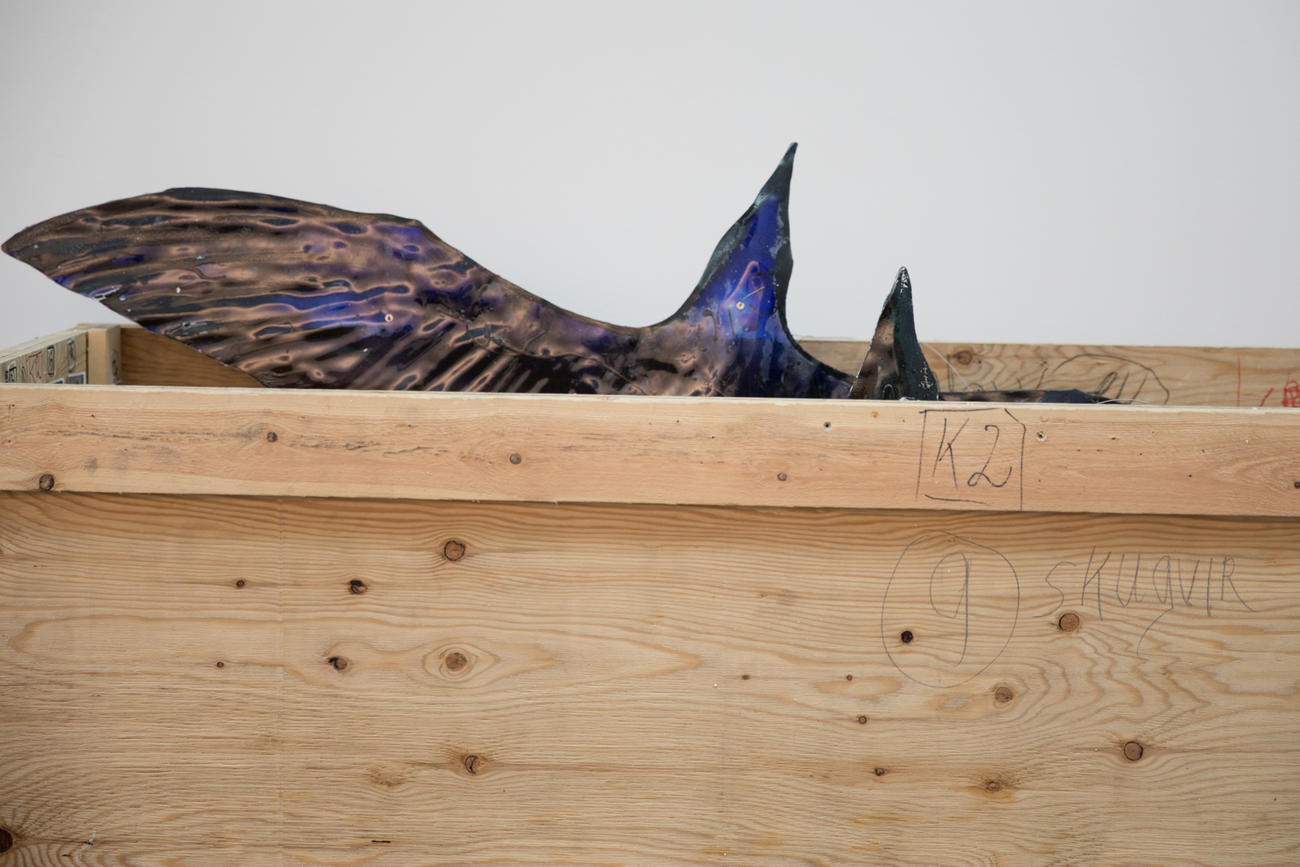 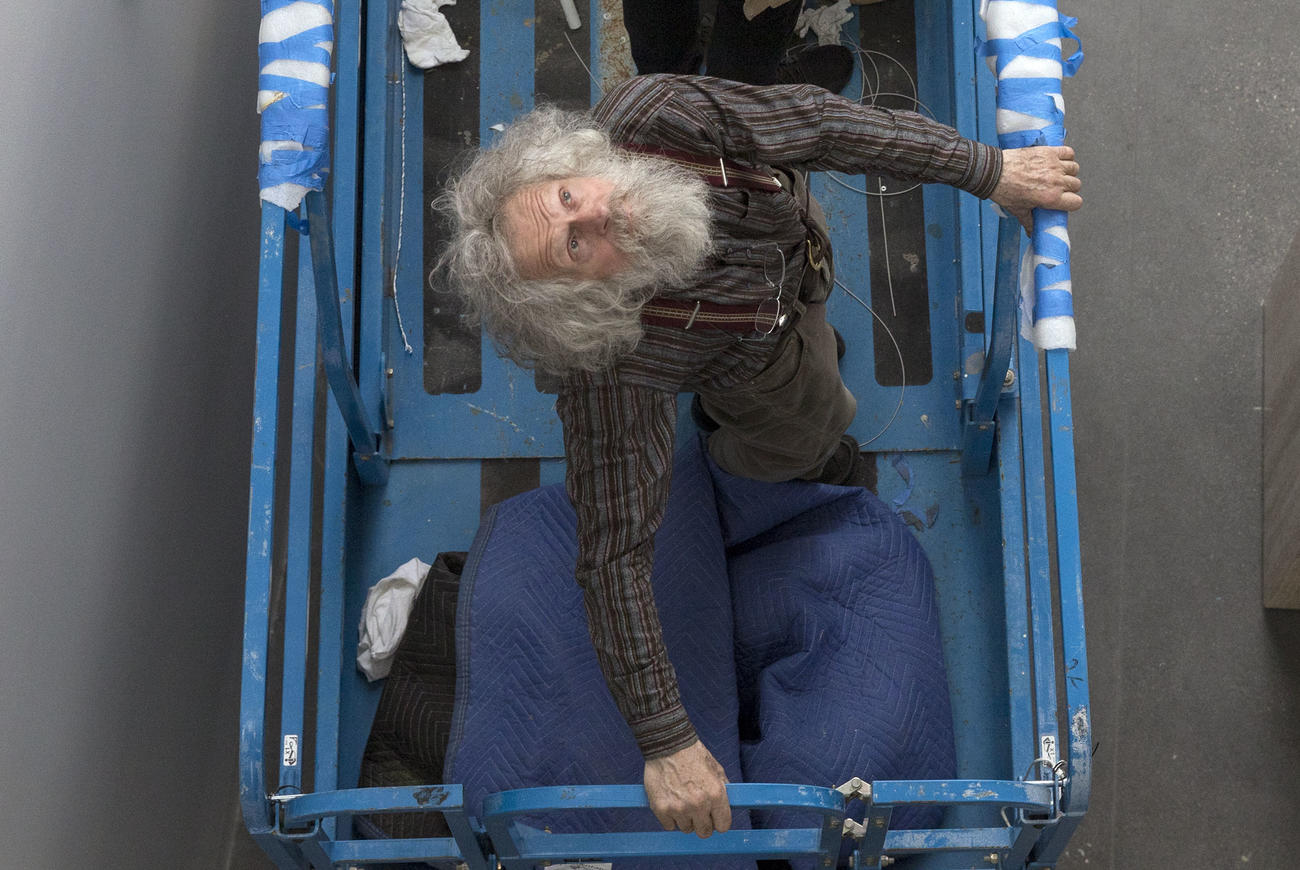 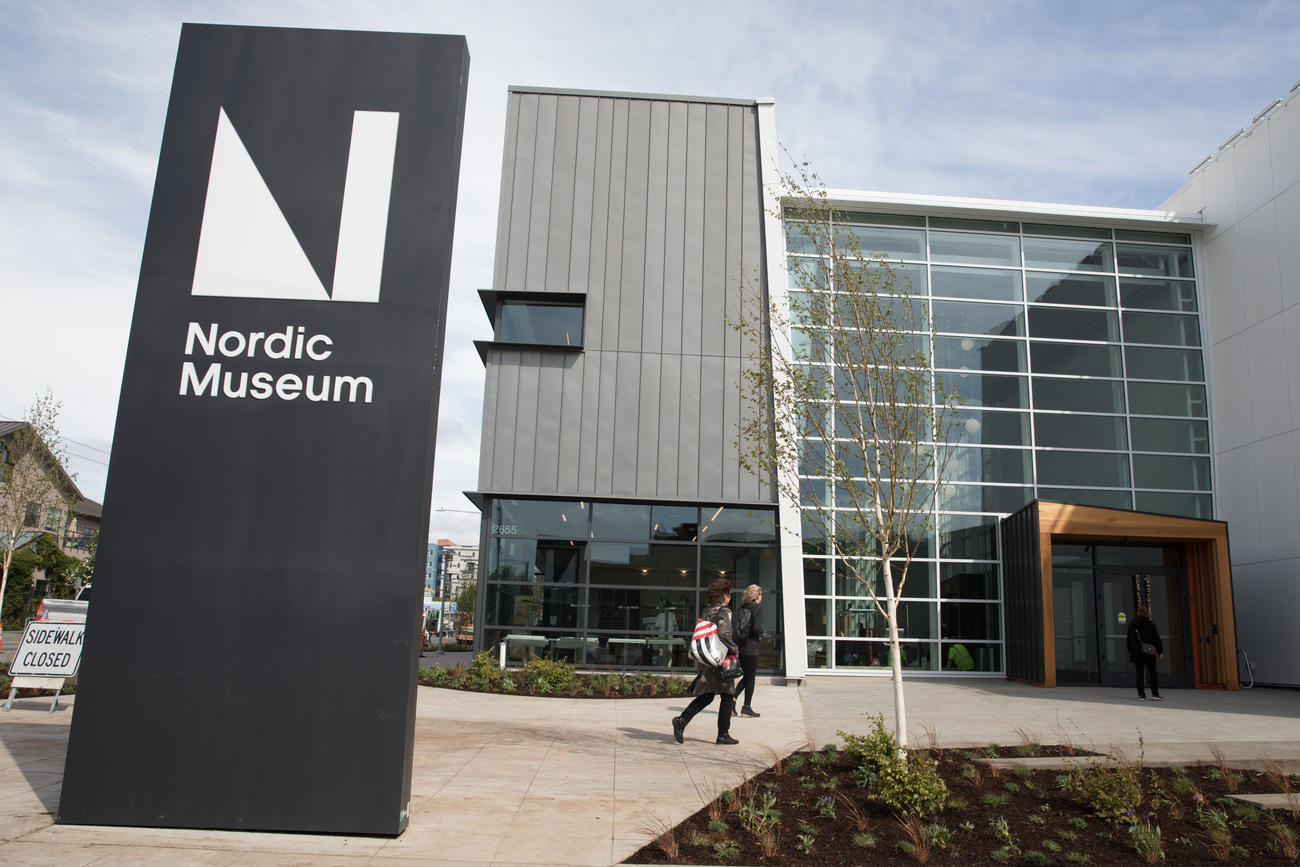 An exterior view at the Nordic Museum in Seattle's Ballard neighborhood, April 27, 2018.

An exterior view at the Nordic Museum in Seattle's Ballard neighborhood, April 27, 2018.

Nelson says he knew immediately that he wanted Tróndur’s seabirds featured in the new Nordic Museum. “I was so impressed by him and his studio,” he recalls. “The metaphors he was talking about — migration and journeys and the sea — match the themes of the new Nordic Museum. And one of the many things Seattle has in common with the Nordic countries is a strong glassmaking tradition, so it fit perfectly.”

Tróndur’s migrating birds soar eastward through the central corridor of the Nordic Museum, designed by Seattle’s Mithun architects to resemble the craggy and towering walls of a fjord. A narrow skylight runs down its length, allowing light to pour through the ceiling and catch on the smooth surface of the birds — many with wingspans of six feet — that are translucent but artfully colored, like stained glass.

“They are all different,” Tróndur says, in his Faroese accent, which sounds something like Danish but with more of an Irish lilt. “You can come in, and choose a bird to follow. You can say, ‘I’m the yellow one.’ This way, you can be free, like a bird.” With his unruly nest of grey hair, and wearing his traditional flannel shirt and suspenders combo, he stretches his arms out side-to-side, as if catching a thermal. Tróndur cuts, paints and kilns each bird individually, in a process he says takes about one week. “But I have been living with them all of my life,” he adds.

As a fisherman and sailor, Tróndur gained a fondness for seabirds, especially the albatross, which can traverse oceans and has long been believed to protect sailors on stormy seas. In 1976-77, Tróndur was part of the five-man crew on British explorer Tim Severin’s “The Brendan Voyage,” an attempt to replicate a legendary 6th century voyage Irish monks may have made across the Atlantic to the New World (beating not just Columbus but the Vikings, too).

Using historically accurate materials, the Brendan boat was constructed of tanned leather (Tróndur calls it the “skin boat”). “The water was rough. Very rough,” he recalls. “But we had an albatross following us very close. That’s good luck.” The skin boat made it to Newfoundland and the crew lived, against all odds.

Tróndur’s first major journey was leaving the Faroe Islands to attend art school in Norway. He later gained acclaim for his bold abstract paintings, which radiate both a watery sense of movement and a darkness underneath. Now his work can be seen all over the Nordic countries, as well as in China, Russia, Indonesia, Ireland and France. “Bill Clinton has two birds,” he says with a delighted smile. The flock of seabirds at the Nordic Museum is his first permanent installation in the United States.

Son Brandur says they weren’t sure how many birds the building could hold, so they shipped 42, in wooden crates marked “Clas Fragil.” They ended up using 25 in the main hallway. “You need room between birds to look like they’re flying,” Brandur says. “The colors need to ignite each other.” There are a few eagles mixed in with the seabirds, though Tróndur is quick to point out they can’t make oceanic journeys. “Eagles get too thirsty,” he says.

The glass seabirds journeyed all the way from Nordic seas to the Northwest corner of the United States, much like the fisherman who settled in Ballard long ago. They take flight inside a sparkling new, strikingly modern structure that holds the city’s past and hints at its future. Tróndur clasps his hands and looks up at the birds swooping down the hall. “They bring nature inside,” he says. “They give the building a soul.”

This story has been updated to include a correction to reflect that the Brendan Voyage successfully landed in Newfoundland. The China Voyage, on which Tróndur joined Tim Severin in an attempt to travel from China to the United States in a bamboo raft, failed to reach its destination.