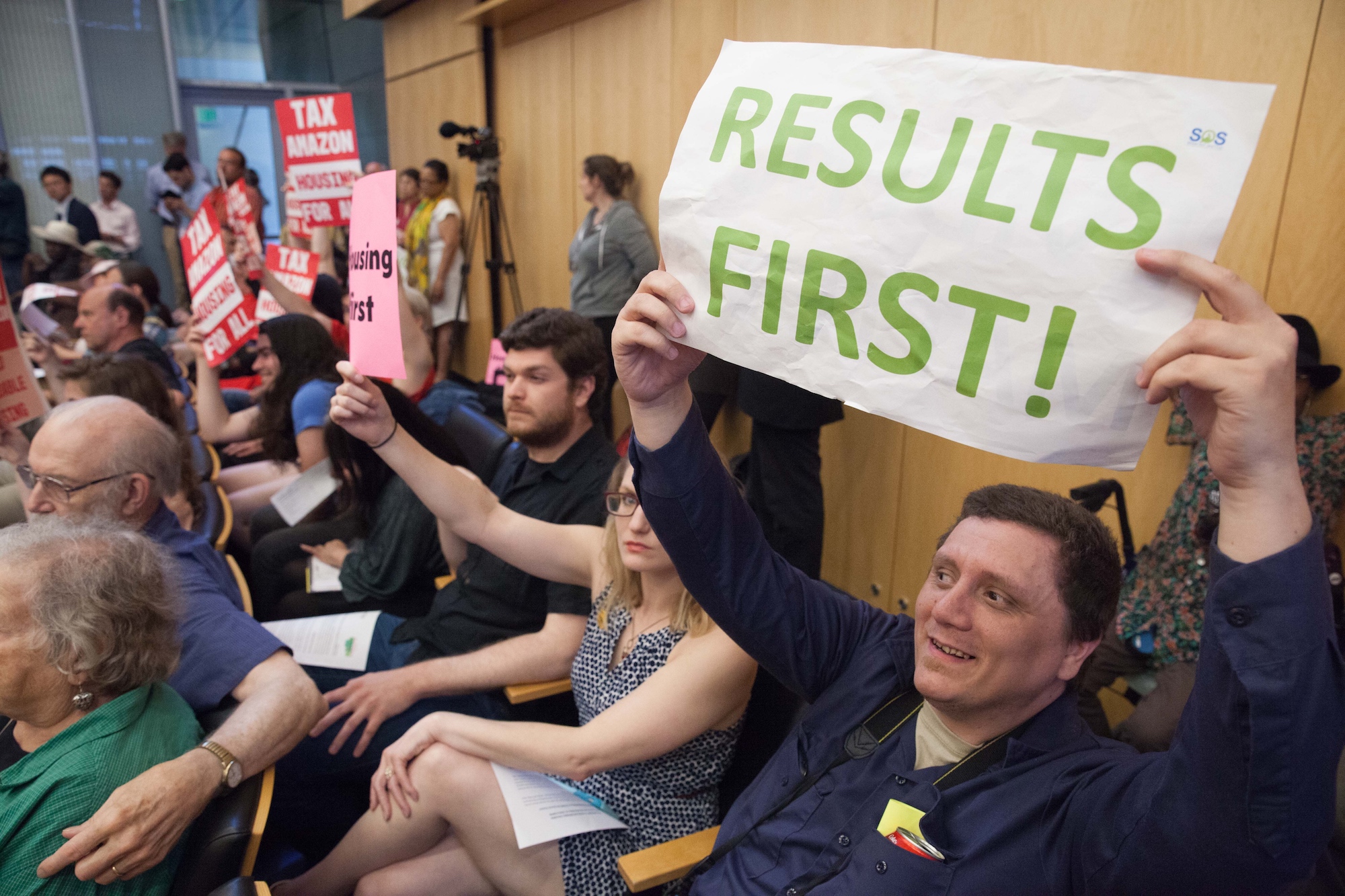 A man at a City Council vote on the business tax holds up a sign advocating for holding off on a new tax until current efforts to reduce homelessness produce more results. (Photo by Matt M. McKnight/Crosscut)

The campaign to repeal Seattle’s newly passed tax on large businesses has the backing of some the region’s biggest players in the business community.

A Wednesday election filing confirmed that, as Crosscut first reported last week, the No Tax on Jobs campaign has secured over $300,000 in pledges in less than a week — in fact, $352,775 from 50 different sources.

The size of the donations range from $200 to $30,000. Donors span from relatively small business owners and firms giving $200, like Mike Carr of Performance Radiator and Cotton & Cockleburs, a business advisory company, to multi-national corporations. (Cotton & Cockleburs CEO Stephen G. Welch is a member of the board for Cascade Public Media, which operates Crosscut and KCTS 9 public television.)

The Washington Food Industry Association, which represents grocery stores, pledged the most at $30,000.

Many of the donors come from familiar companies. Starbucks, Kroger, Albertson’s, CenturyLink and Paul Allen’s Vulcan are among those high up on the list of mega-companies supporting the effort with $25,000 donations. Amazon, which initially threatened to halt construction on a building and vacate another in response to an earlier version of the tax, will contribute $25,000. The e-commerce giant is expected to pay between $10 million and $13 million per year under the current tax, approved last week.

Developers are also showing an interest in repealing the tax. Among others and in addition to Wright, Holland Partner Group will donate $20,000, Clise Properties will give $7,000, and Hunters Capital has promised $1,500.

As Crosscut also reported earlier, the campaign has the consulting services of Ceis Bayne East Strategic, with the filing showing the company of former deputy mayor Tim Ceis offering $1,000 worth of its services.

The campaign will also pay $5,000 to Pacifica Law Group, likely to craft the language of the referendum repealing the tax.

The anti-head tax campaign, called No Tax on Jobs, sprung up quickly after the council passed an annual tax of $275 per employee on businesses with revenues of $20 million or more last week. The tax is slated to raise around $47.5 million per year for homelessness services and housing construction.