In the Puget Sound region, old and new driving habits are merging — poorly. 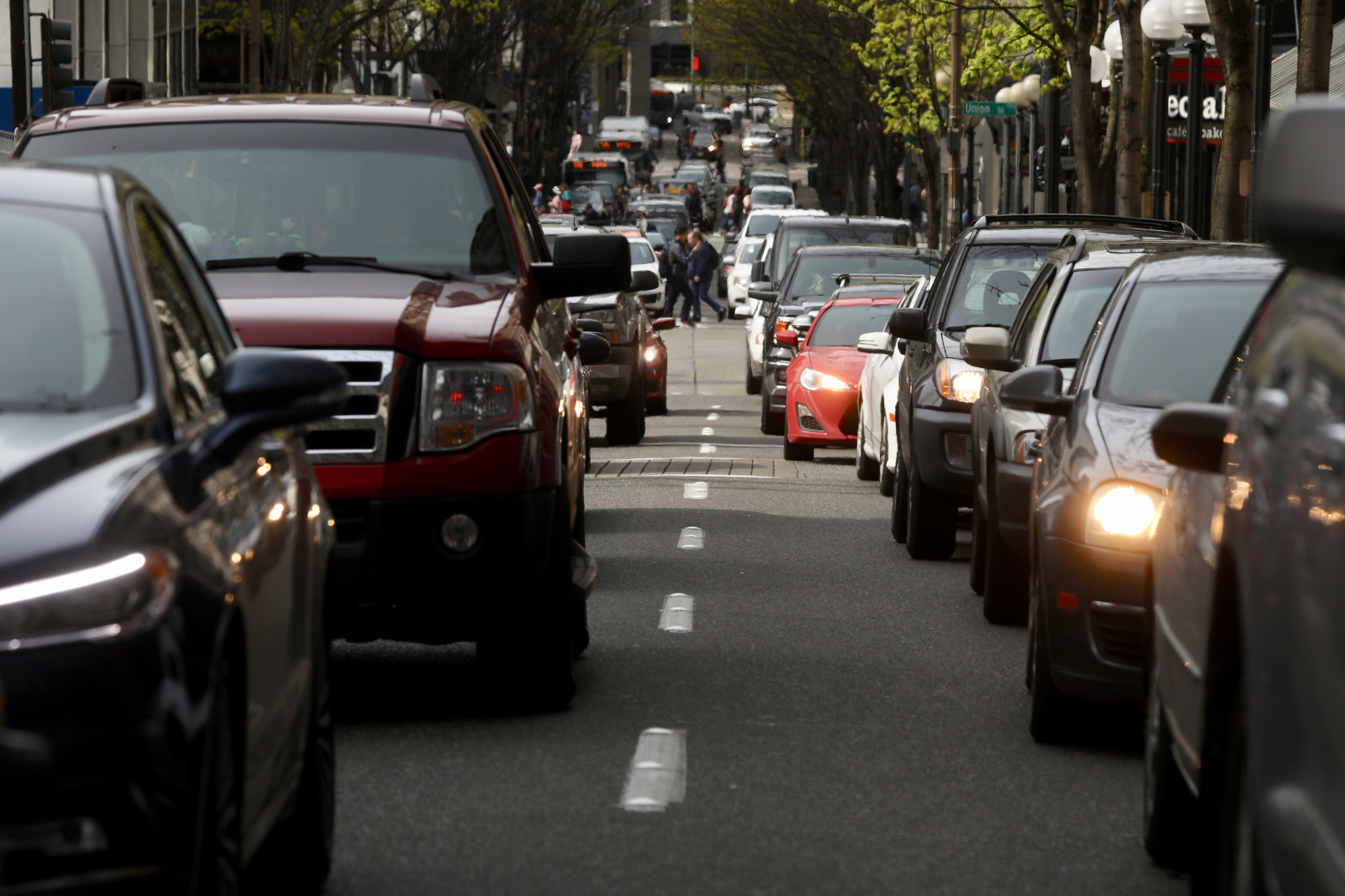 With dozens of people, on average, moving to Seattle daily, newcomers and longtime residents alike are facing a constant cycle of culture shock on regional freeways and local city streets.

Transplants from Los Angeles, the East Coast or South Florida — where driving habits are more fast and aggressive — might find Seattle driving unnecessarily slow and tame.

“That’s Old Seattle. We, as a passive-aggressive place, are slow to anger,” notes Mark Hallenbeck, the director of the Washington State Transportation Center and a senior data fellow at the University of Washington. “In Seattle, we’re looking to give way and we wave people in. In New Jersey, you fight your way in — there’s an expectation there.”

“We’ve had this huge growth spurt with an awful lot of people who come from very different cultures,” he continued. “The problem is you bring a bunch of people from New Jersey and New York to Seattle, and they are quick on the horn and they’re loud and aggressive, and Seattleites are backing off and going: ‘This person is crazy.’ ”

Unfortunately for all of us, reaching a compromise on a “new Seattle” way of driving isn’t likely anytime soon, Hallenbeck says.

“My impression of Seattle is, we haven’t come to terms with what current traffic congestion means to us,” Hallenbeck said. “That is part of our problem. If everyone is doing the same thing, it works better than if different people are doing different things.”

The blare of a car horn isn’t often heard in metro traffic and can be jarring to the Seattle ear.

“We don’t honk unless you’ve been sitting at a green light for more than 20 seconds and even then, it’s a very light beep,” Hallenbeck says.

But as Kelly Just, AAA Washington’s traffic safety program manager, notes: “Sometimes a honk doesn’t mean a negative. Sometimes you’re actually trying to give someone a signal,” such as that you’re willing to let them into traffic or that their headlights aren’t on in the dark.

Meanwhile, the newly arrived are still learning their way around while also facing Seattle’s unpredictable mix of traffic conditions. Some patience is required. Hallenbeck says the only real fix to that is time, but it’s also a never-ending cycle as people continue to flood in.

“The only thing that solves that is [for newcomers to] drive the road for the next three weeks. … But as you continually add new people, you never get over that hump — this is a problem in a growing community.”

Instead of expecting traffic to be a certain way, you do have to plan your life around traffic.”
— Kelly Just, AAA Washington’s traffic safety program manager

Traffic experts recommend drivers — even longtime locals — do some research to find their ideal commute.  Driving might not be fast or efficient. But if you do drive, plan ahead for traffic conditions and consider alternative routes.

“Instead of expecting traffic to be a certain way, you do have to plan your life around traffic,” Just says. “There are lots of outsiders who are used to jumping in their car and going somewhere, and suddenly [in Seattle] you’re in a parking lot and you don’t know why that’s happening. Until you learn those [traffic patterns], it can be very difficult.”

Hallenbeck suggests: “If you’re new to the area, explore your alternatives.” Using park-and-ride lots, taking the bus, taking the Link light rail or the Sounder train, using a carpool, biking, walking — or some combination of the above. “What options do you have? Until you explore them, you might not know there could be six different ways to take the bus to your work,” he says.

There are also simple tips and reminders to ease Seattle’s nightmarish traffic congestion, including basic driving habits that we’ve been taught but still seem to ignore: 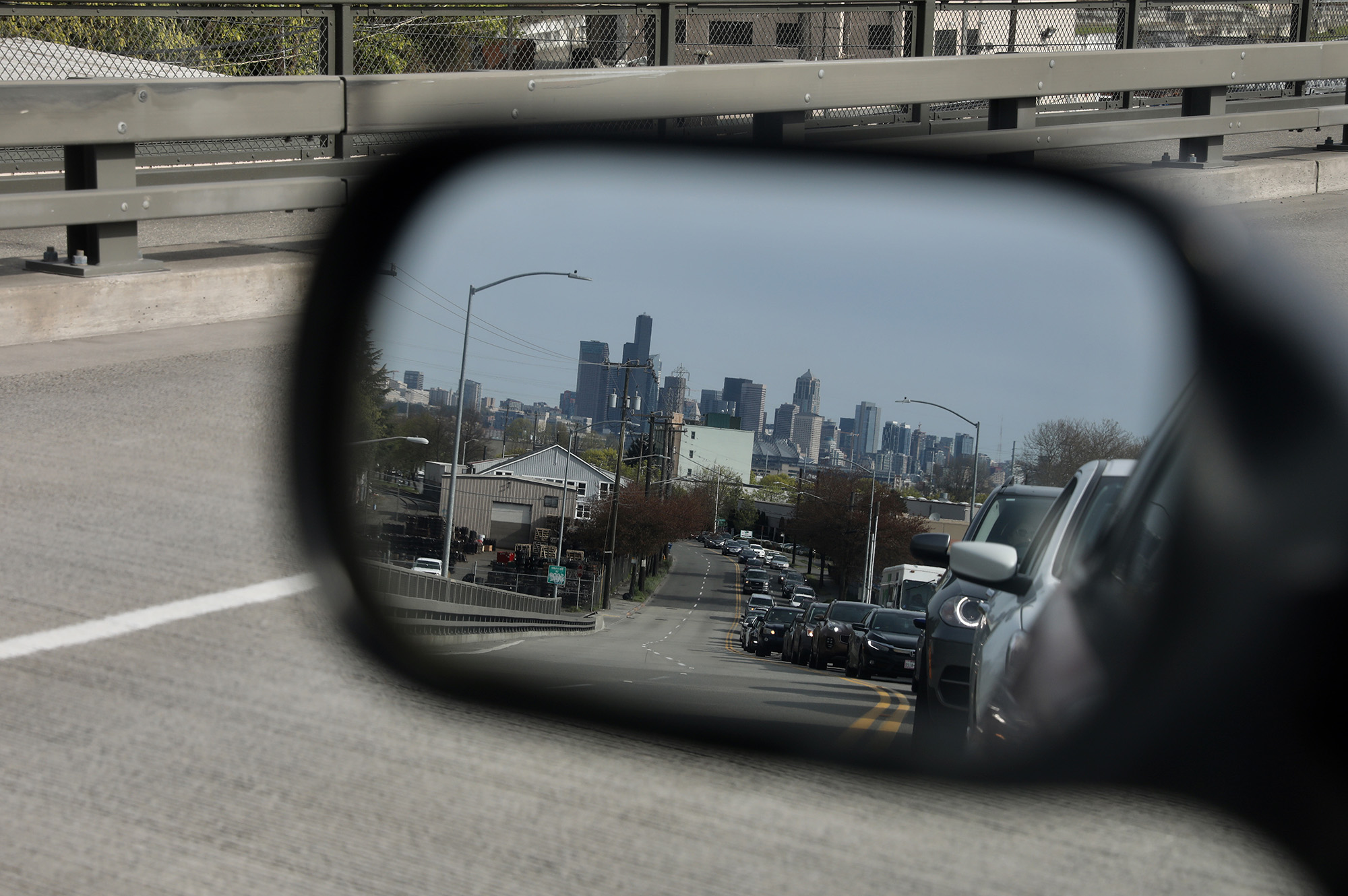 Put. Down. The Cellphone.

It’s been illegal in Washington state for almost a year and yet, drivers love using their phones.

“If you want roadways to work better in Seattle, get the bleep off your phone,” says Hallenbeck.

“Turn it off — don’t answer the phone, don’t talk on the phone, I don’t care if it’s hands-free or not, don’t text, don’t do text-to-speech — Turn it off,” he recommends, adding: “There’s nothing that can help traffic more than that.”

Fiddling with in-car systems, programming your destination into GPS, or other attempts at multi-tasking pose problems, too, because they take our eyes and brains off the primary task at hand: Driving.

“I’ve driven past people putting contact lenses in,” Just says. “People are thinking, ‘I need to get in the car and get going,’ instead of taking the time before or after to do it. They think they’re doing well at both things, which they’re not because our brains can’t handle [multi-tasking].”

Hallenbeck says, for example, it takes 2 seconds to refocus our eyes. So when you’re driving and you glance down at your phone, that’s 2 seconds lost. Look back up quickly to check the road, that’s another 2 seconds. At 60 miles an hour, in those 4 seconds, you’ve gone at least 240 feet.

Meanwhile, Just says research from the AAA Foundation for Traffic Safety has found it can take up to 27 seconds for a distraction to leave a person’s mind. So if the driver in front of you is busy reading an email at a traffic light, that’s why they might be slow off the brake when the light turns green.

“There’s a lag of their brain saying, ‘oh, it’s time to go,’ ” she says, “so fewer people make it through the light — and that adds to congestion. There’s a chain reaction of drivers tapping their brakes that comes along with distractions.”

The ‘zipper merge’ is your friend

The competitive driving instinct often surfaces when traffic tries to merge on a congested freeway, but our gut reaction can actually make matters worse for traffic conditions.

“It becomes a struggle to move forward in traffic, because drivers already on the freeway tend to not want to let people in,” Just says.

But don’t merge immediately if traffic is jammed up. It might sound counterintuitive but, experts say, it’s more efficient to use up the full length of the merging lane and then take turns with the flow of traffic to merge on to a freeway as the lane ends.

It’s a best practice called the “zipper merge.” (Think of traffic seamlessly coming together as one like the two sides of a zipper syncing up.)

“When you don’t all merge at once and you use the zipper mode, it actually relieves congestion,” Just says. “When you do it immediately, traffic immediately stops. [The zipper merge] keeps the flow of traffic going instead of turning it into a parking lot.

This tip is pretty basic and yet a lot of drivers still don’t observe it: “An on-ramp is an acceleration ramp,” Washington State Patrol Trooper Rick Johnson notes.

He said his fellow troopers see this as a frequent issue on the region’s freeways. On ramps are designed so that drivers can reach the speed of moving traffic.

“If you enter the freeway at a slower speed than what traffic’s moving at, it’s going to cause more congestion.”

The left lane is the passing lane

In other metro areas — and per basic driving rules — the left lane is meant primarily for passing and also for faster moving traffic. Not so in the “old Seattle” way of driving.

But that’s something that local drivers should start adhering to, for their own sake. Just notes: “Left-lane slow drivers — that obviously interferes with flow of traffic.”

Leave space… but not too much

Driving down I-5 or even on city streets, it’s not uncommon to see Seattle drivers leave several car-lengths of space between themselves and the car in front of them. That can be both good and bad.

It’s good, because following too closely can be dangerous and lead to rear-end accidents when traffic stops abruptly. But it can also be problematic when everyone is competing for space in rush hour and large gaps can incite impatience.

“Of course in rush hour when you’re going 5 miles hour, if you give too much distance, somebody takes that spot in front of you,” Johnson said.

You’ll see them most frequently on express toll lanes, like those on I-405, and on some stretches of HOV lanes: Double white lines that separate those restricted-use lanes from the rest of traffic.Think of them as a wall, a barrier — you’re not supposed to cross them. That’s illegal.

“Probably one of the biggest things — and it still occurs today — is people jumping that double-white line. It’s a restrictive lane; there’s [designated] entries and exits for those lanes,” Johnson says. Specifically, when the toll lanes were added to I-405 north of Bellevue, “at first, I think people were caught off guard by going ‘oh, my goodness, I want to take that exit and I didn’t realize I had to get out of those lanes a half-mile back to take this exit,’ ” Johnson said. “I think as time goes on, it really comes down to humans and change — and it’s tough.

“There’s been aggressive driving and incidents of road rage started by somebody not signaling and cutting somebody off,” Johnson says. “It’s just about being courteous.”

And give yourself time before making a move. One or two blinks of your turn signal isn’t truly enough time to alert your fellow drivers of your intent. The Washington state Driver Guide states you should signal “at least 100 feet before you make your move.”

Turn your headlights on. Seriously.

Daytime-running lights and headlights are not the same thing.

Daytime-running lights are now standard in most new vehicles but typically illuminate only the side part of your headlights; with the full headlights, you usually have to manually switch them on and an icon will light up on your dashboard to let you know. Headlights are brighter and they not only illuminate your front lights but also your red, back lights as well. You need both lit when it’s dark out.

“Besides helping you to see at night, headlights help other people see you,” the Washington state Driver Guide notes. State law requires you to have your headlights on from at least 30 minutes after sunset until 30 minutes before sunrise and also when it’s difficult to see, such as during rain, snow or fog.

So turn your headlights on, not just for your own safety — but for everyone else’s too.