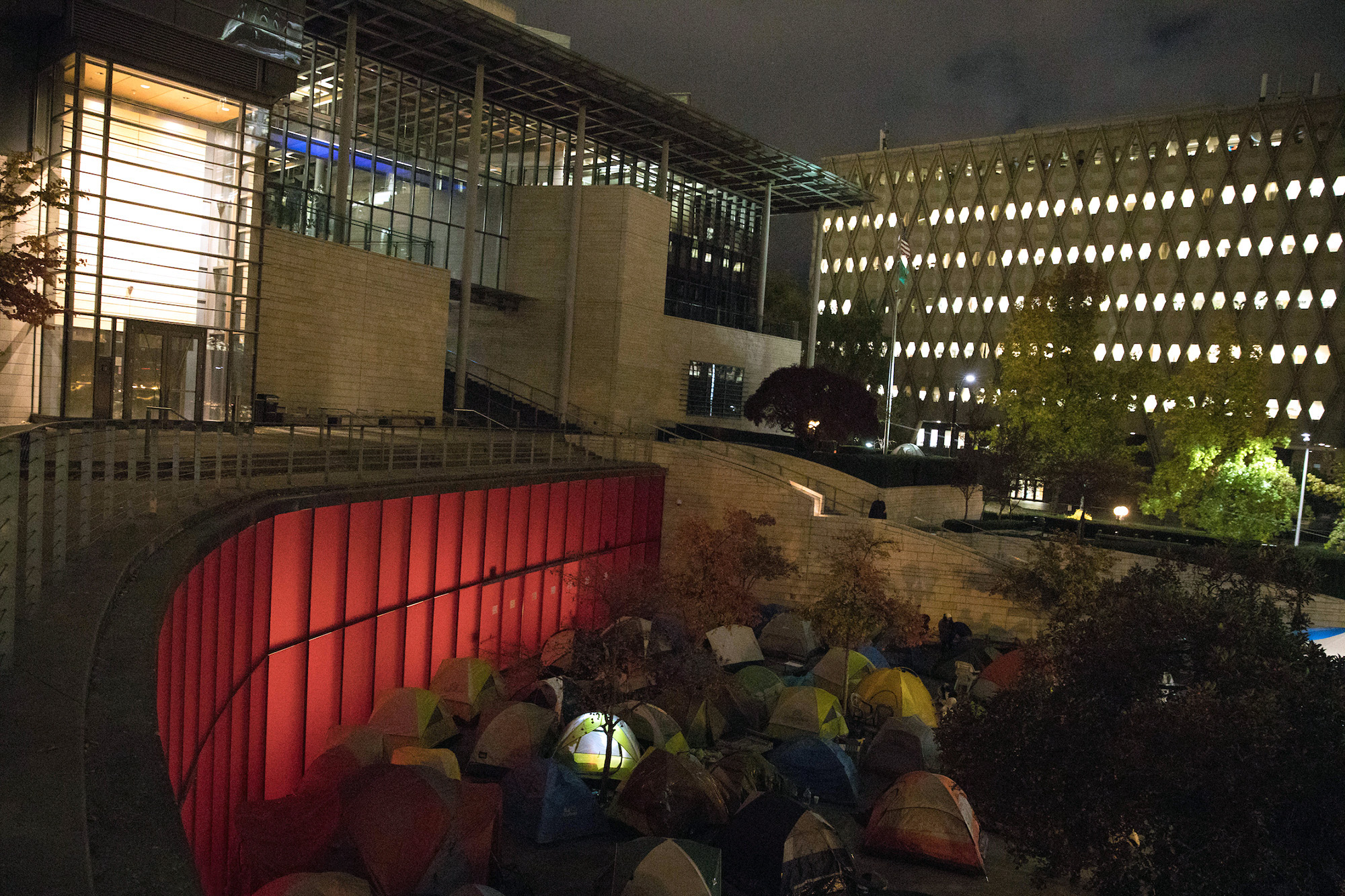 Community members and activists slept in tents along Fourth Avenue in downtown Seattle outside of City Hall during an overnight action advocating for the head tax. November 2017. (Photo by Matt McKnight/Crosscut)

King County needs between $360 million and $410 million every year to realistically solve the homelessness crisis, according to a report quietly drafted by a consulting firm in partnership with the Seattle Metropolitan Chamber of Commerce.

It’s perhaps the most concrete estimate of what it would take to fix homelessness in the region. It’s also dramatically higher than any dollar amount under serious discussion either in Seattle City Hall or in King County Council chambers.

The new homelessness report has only just begun to penetrate City Hall. In an interview Wednesday, Councilmember Lorena González said she had not yet seen it but was scheduled to receive a briefing on the findings Friday. She said she had heard about the $400 million estimate.

In addition to the dollar estimate, the report found strong correlation between rising rents and the rising homeless population, according to a short synopsis of its conclusions published Wednesday evening by the consulting firm, McKinsey and Company. Of the approximately $400 million necessary, the firm concluded 85 percent should go toward new housing.

"Action would be needed on three fronts: preventing more people from becoming homeless in the first place, assisting the homeless to find accommodation, and most important, providing more affordable housing," according to McKinsey's brief summary.

Crosscut has not seen the report in its entirety. The Seattle Times reported Wednesday the final draft called for at least 14,000 new units of affordable housing.

The findings were unveiled earlier this year to a steering committee comprised of Chamber representatives as well as representatives of King County, Seattle and philanthropic organizations, like the Gates Foundation and United Way, according to Chamber spokesperson Alicia Teel.

The funding estimate arrives just as Seattle is bitterly divided over whether to pass a $75 million per year tax on large businesses to pay for more affordable housing and homeless services. Proponents of the business tax have cast the proposal as a step in the right direction while opponents view it as detrimental to the city’s growth.

The Seattle City Council is scheduled to vote on the contentious business tax on Monday.

As part of the Chamber’s offensive against the proposed business tax, its CEO Marilyn Strickland has argued City Hall already spends a significant amount on homelessness. “We continue to urge the Council to carefully examine the $63 million the City now spends on homelessness, the $30 million housing bond they approved in 2016, the $290 million affordable housing levy [over seven years] approved by voters,” she wrote in an email to members earlier this year.

But for Councilmember González, the report upends that argument. That it has not yet gone public with the report frustrates her. “What I think is disingenuous is for esteemed members of our business community to say that $63 million is enough when they know through their own analysis and report that $400 million is the right number,” she said, referring to the amount the city currently budgets for homelessness.

Work on the report began last fall, when consulting firm McKinsey and Company approached the Chamber with a proposal to look at the regional homeless problem. The Chamber agreed to partner on the report as a client at no cost.

If the proposed business tax passes, Seattle would have close to $200 million annually to spend on affordable housing construction and homelessness services.

That would be the largest amount the city has ever spent on homelessness. And yet it would still come in significantly less than what the report calls for. The overwhelming majority of the region's estimated 12,000 homeless — 70 percent — live in Seattle.

But the report's $400 million estimate might still be low. The figure was calculated based on what it would take to turn existing rental units into permanent homes for the county’s unsheltered.

In briefings last month to service providers, neighborhood groups and business interests, McKinsey cautioned the figure could be higher if calculated based on constructing new affordable units.

“It could be higher if construction costs exceed subsidy costs (which I think everyone understands that they do),” wrote Director of the Public Defender Association, Lisa Daugaard, in a text message to Crosscut. She was briefed on the report last month, she told Crosscut.

The Chamber has been critical about how the city has been spending on the homelessness crisis. Teel said if the region could fix its uncoordinated system, the Chamber would be open to future conversations about additional funding.

But the Chamber’s opposition to the proposed business tax is unchanged.