A runway tribute to the Black Panther Party and Wakanda 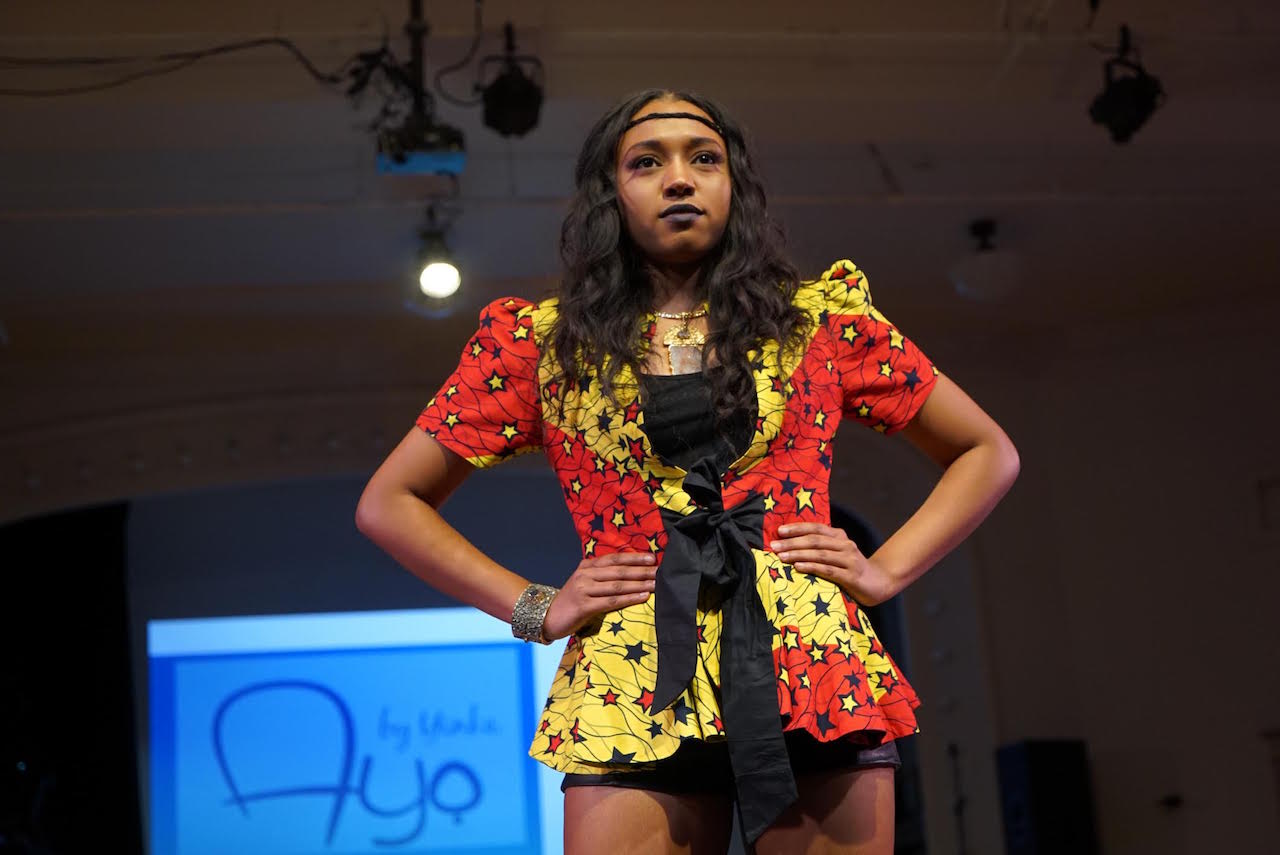 A young man stands on the edge of the runway, his beret, tipped perfectly to the side, emanates Black beauty, pride and power. He raises his fist to the air.

“All power to the people!” The audience claps as someone shouts the Black Panther Party slogan.

“You lead, I will follow!” another woman emphatically adds.

The challenge, set forth to three local fashion designers was this: Combine inspiration from the legacy of the Seattle Black Panther Party, which celebrated its 50th anniversary over the weekend, with the cultural phenomenon that is the comic book action film “Black Panther.”

And Wakanda was in full effect on the runway on Sunday at Seattle’s Washington Hall, with handcrafted gold and silver leaf-shaped jewelry, layers of beads and vivid African prints that embellished a men’s jacket and also flowed in full-force in embroidered floor-length gowns. Rich palettes of yellows, deep blues and shimmering purples saturated the room.

Perhaps less colorful, but no less powerful, was the “fashionista”-like tribute paid to the Black Panther Party, with slick leather pants and black boots (either combat-style or as zip-up thigh highs with heels), leather jackets and black berets.

Elmer Dixon, who co-founded the Seattle Chapter with his brother Aaron in 1968, says the two Black Panther legacies fit together perfectly.

“If you look at the movie,” he said, “you can see casual nods to the Black Panther Party.”

And in February, actor Michael B. Jordan, who plays Killmonger in the film, appeared on the cover of GQ in Black Panther Party garb with the headline “Rise Up.”

“Black Panther” costume designer Ruth Carter (who also worked on “Malcolm X”) included the Party in her list of influences in an interview with Bleeding Cool: “When you look back at the Black Panther Party, they were always very into infusing African into the movement. It was appropriate for the times, and ironically, appropriate for today.” 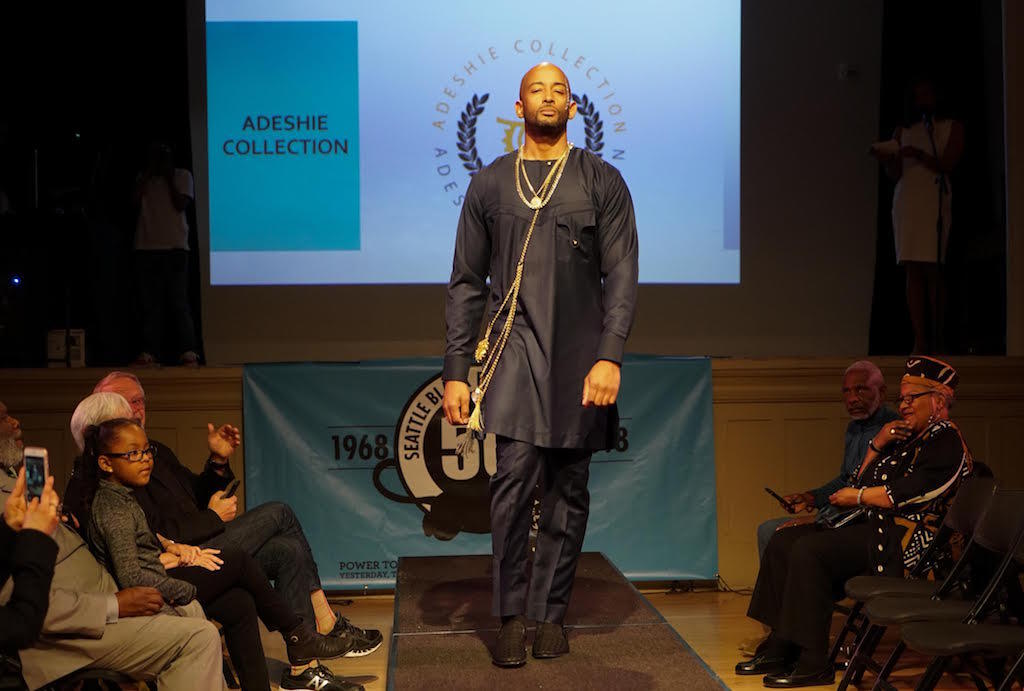 Lashawn Gamble dressed in a piece by Adeshie Collection with jewelry by Camisha Jackson of Lunaversoul. (Photo by Susan Fried)

Lashawn Gamble dressed in a piece by Adeshie Collection with jewelry by Camisha Jackson of Lunaversoul. (Photo by Susan Fried) 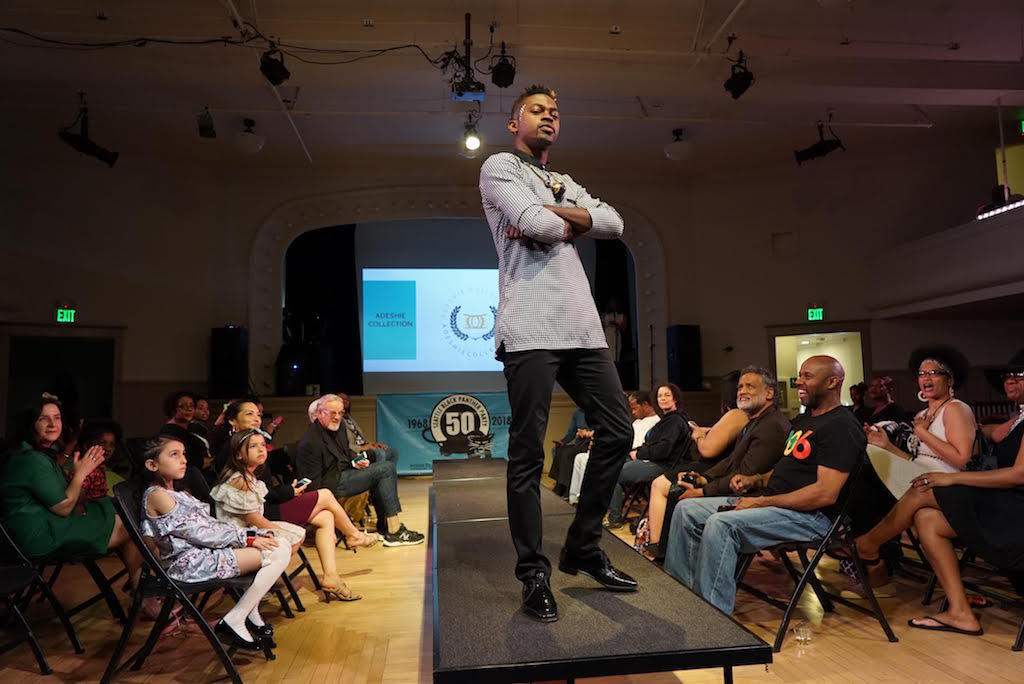 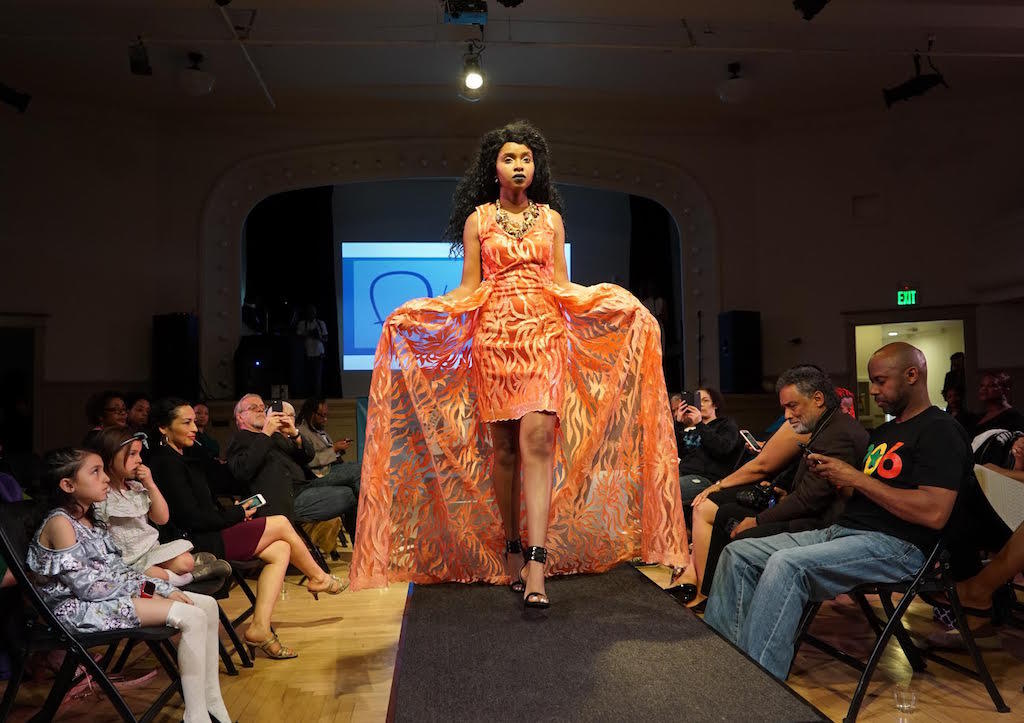 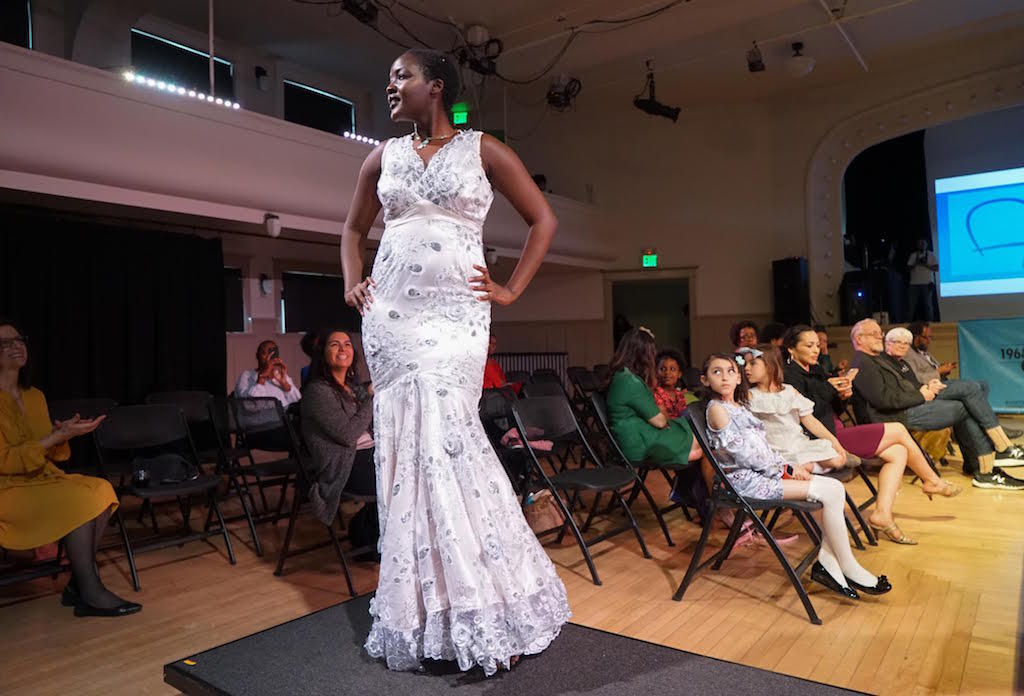 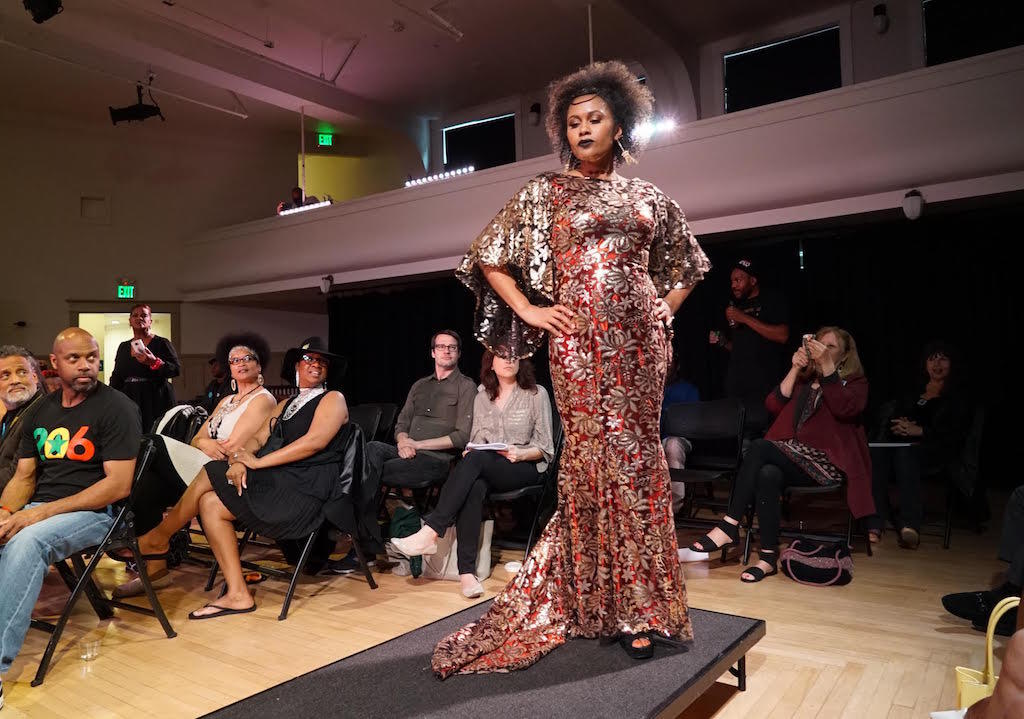 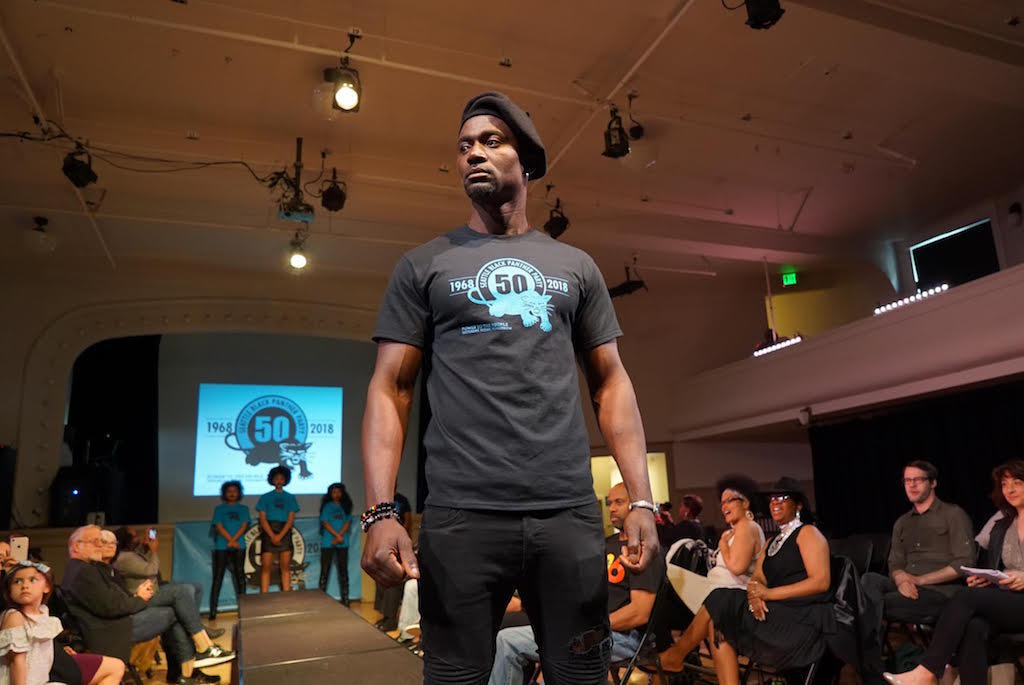 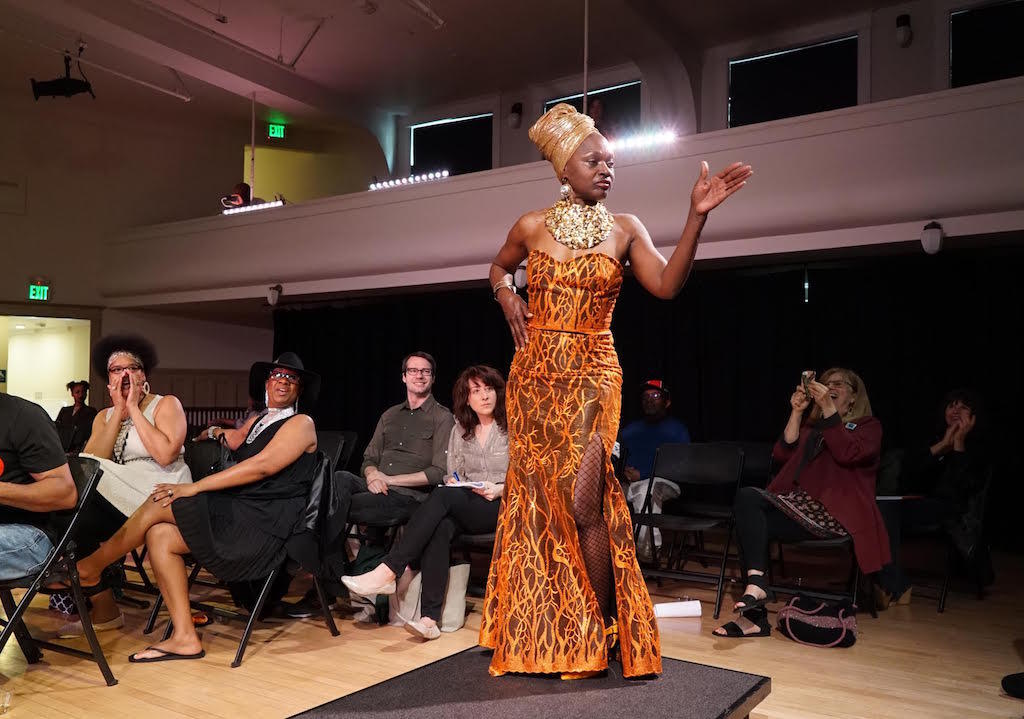 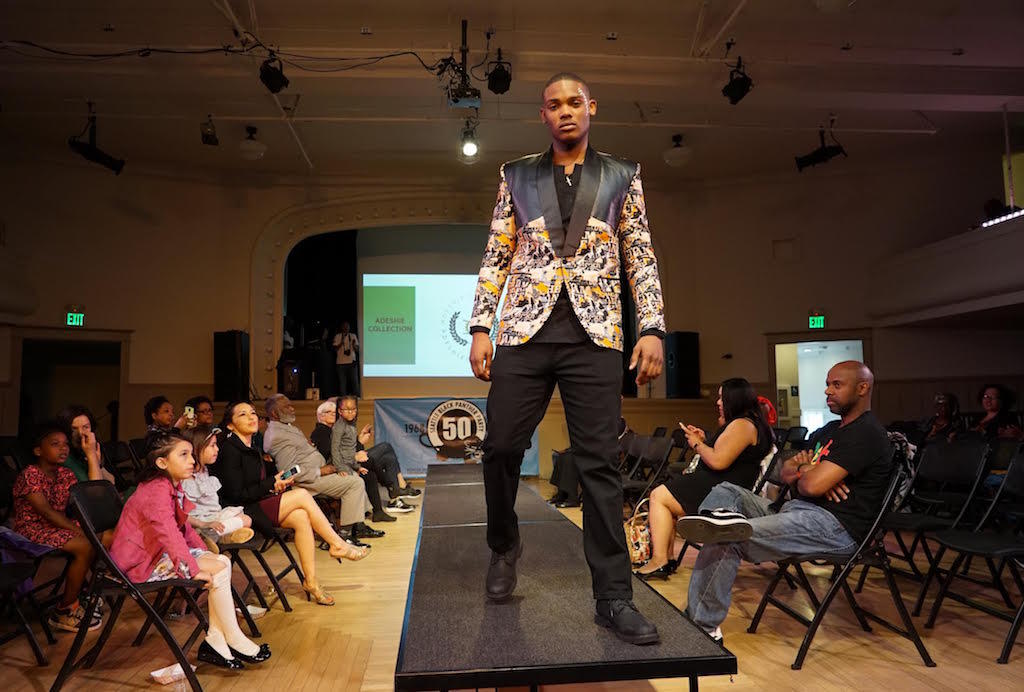 “Actually, I watched it about three times!” said Junior.

“We used a lot of gold embroidery, which signifies royalty. We associate with that because that's part of our brand. So it was easy for us when it came to the movie part because it's from our origin, too,” explained Oppong.

“So I had skirts, short skirts, pleather pants and jackets that were embellished with appliques like the Black Panther head itself, which kind of turned it around and added some edge to it,” Ola said.

But she also wanted to put her own fun spin on the aesthetic.

“I like to work with things that shine. At first you just have a leather jacket. But then you think, how can you, you know, like, bedazzle it?” She laughed.

Dixon said donning the Black Panther Party beret, jacket and pins was more than just a style statement — it was sign of respect among comrades, one’s commitment to the party, their community and their revolutionary principles.

And seeing the Black Panther Party “uniform” on display — the blue powder-colored button down shirts, the leather jackets, the sunglasses, the berets — all had a powerful effect on Dixon and his brother, Aaron, when they went to the 1968 funeral of 17-year-old Bobby Hutton, who was killed by Oakland police.

“I saw, like, hundreds of Black people in leather jackets and berets, and I said, ‘Damn, this looks like a Black Army!’” Elmer Dixon recalled. “So it was like, people are standing up, and it looked very different than the images of people I saw in the civil rights movement. It looked like people were ready to throw down and ready to demand what was theirs.”

That look, cleverly branded by Black Panther Party Minister of Culture and artist Emory Douglass as “militant chic,” was used to draw young people into the movement. It became an intersectional symbol of alliance among other revolutionary groups like the Chicago Brown Berets and the Rainbow Coalition (founded by Fred Hampton of The Black Panther Party).

Both the Black Panther comic book and the Black Panther Party were created in the same year, 1966, but the official word is the connection was happenstance: Huey Newton and Bobby Searle got the idea for their new party’s name from a poster Stokely Carmichael had at a Berkeley conference on Black Power in October 1966. And Stan Lee, the comic’s creator, said his choice of title had nothing to do with the Black Panther Party’s emergence, calling it a “strange coincidence.”

Serendipitous or not, Dixon sees a natural reason why both Black Panther (the Party) and “Black Panther” (the movie), would use a black panther (the animal) as a symbol of Black resistance: “It’s the nature of the black panther. Defensive-minded, yet non-aggressive. But you mess with their family, you mess with their territory or their livelihood, then they’re going to respond with a ferocity that you will never want to see. That’s the symbolism of the black panther.” 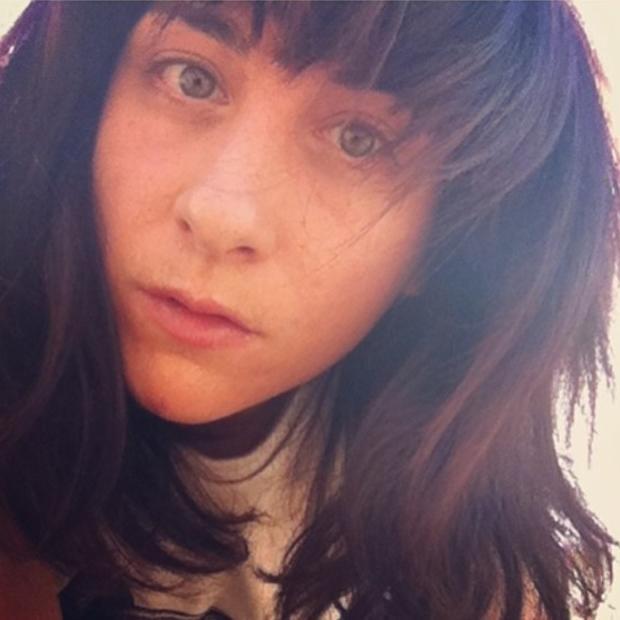 Amber Cortes is a writer, producer and sound artist currently living in Seattle.