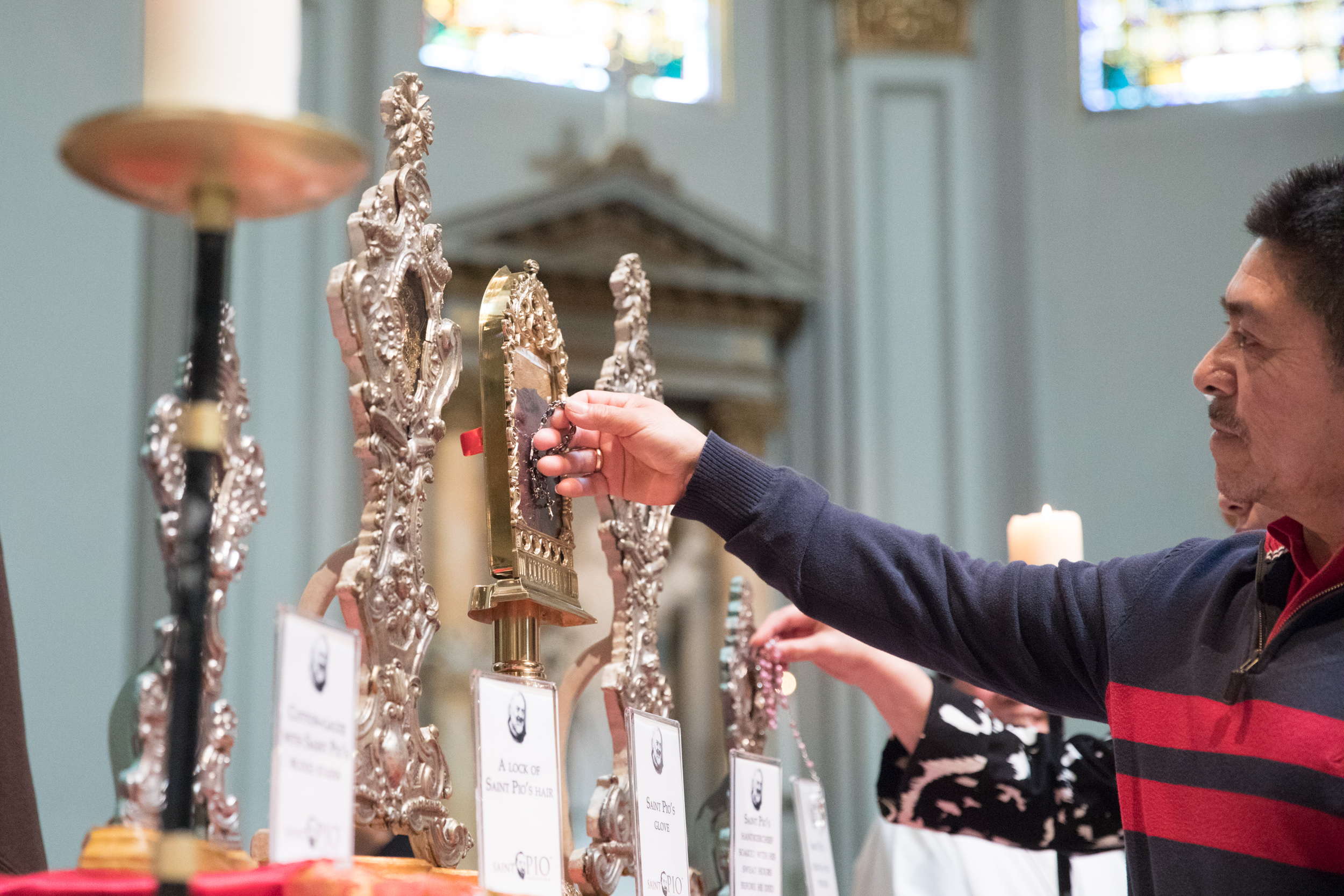 A parishioner touches his rosary beads to Padre Pio's relics during a public veneration at St. James Cathedral in Seattle.

It was kind of like a scene of thousands of fans flocking to see a rock star’s memorabilia after they’ve passed away. Except the thousands who lined up for hours this time did so at a church to see a saintly lock of hair, a glove and a handkerchief soaked in sweat.

On Saturday, St. James Cathedral, a church on Seattle’s First Hill, known to attract Catholics from all over the region, hosted the relics of Francesco Forgione, a Roman Catholic saint commonly referred to as Padre Pio.

This year marks the 50th anniversary of Padre Pio’s death. In tribute, a handful of the saint’s relics, which are usually housed in Rome, are in the midst of an international tour.

At St. James, a Mass attracted more than 1,200 people  — women wearing veils, large families with small, sometimes restless, children and the elderly. During his homily, Archdiocese of Seattle’s Auxiliary Bishop Msgr. Daniel H. Mueggenborg said the relics “remind us that God acted in the world through a real human being.”

Padre Pio, a priest in Southern Italy, is known as the first pastor to have ever experienced body marks that correspond to the body marks of Jesus’ crucifixion — the stigmata or five wounds on both hands, feet and on the side. The priest is said to have bled more than a cup of blood per day from his wounds.

Countless faithful reportedly turned to Padre Pio for confession. He was known as someone who could discern whether a confessor was fully divulging their sins; he’d refuse to grant absolution to those who he believed had failed to do so.

Padre Pio, however, has also courted plenty of controversy. Throughout his life, certain members of the Catholic hierarchy declared him a fraud, at one point even banning him from saying Mass.

Yet, in 2000, in St. Peter’s Square in Rome, Pope John Paul II proclaimed Padre Pio a saint. The Vatican ruled that the 1995 healing of an Italian woman, Consiglia de Martino, was a miracle worked through the intercession of Padre Pio. A second miracle, the healing of a little boy suffering from meningitis who dreamed of Padre Pio, eventually led to his canonization as a saint.

Luciano Lamonarca, founder of the New York-based Saint Pio Foundation, is responsible for handling the tour of Padre Pio’s relics. Lamonarca, an Italian opera singer known as the "goodwill tenor" because of his charitable work, says he has a personal connection to Padre Pio.

After Lamonarca and his wife, Valentina, suffered a miscarriage, the couple traveled to Italy and met a man who kept a handkerchief soaked with the blood of Padre Pio. Soon after, the couple conceived their first son, Sebastian. 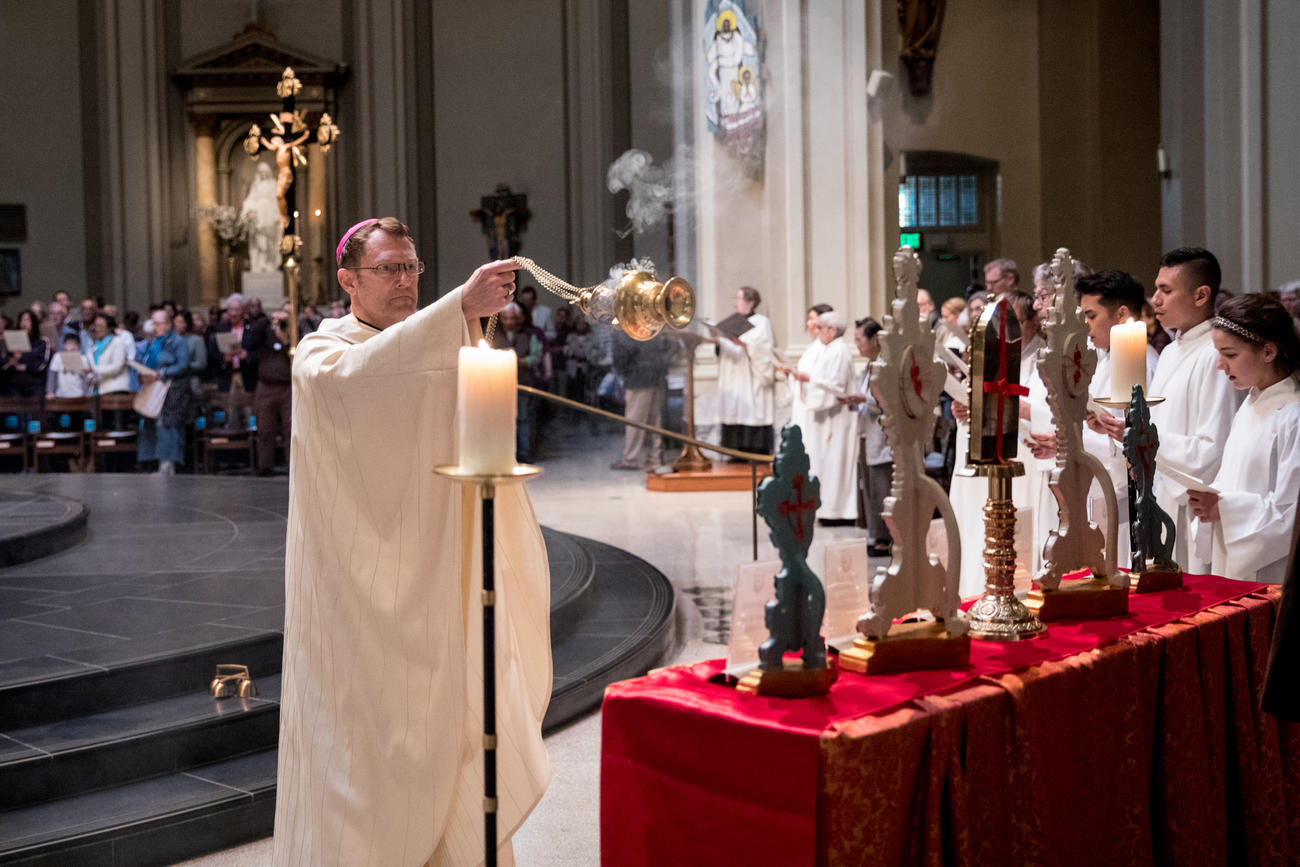 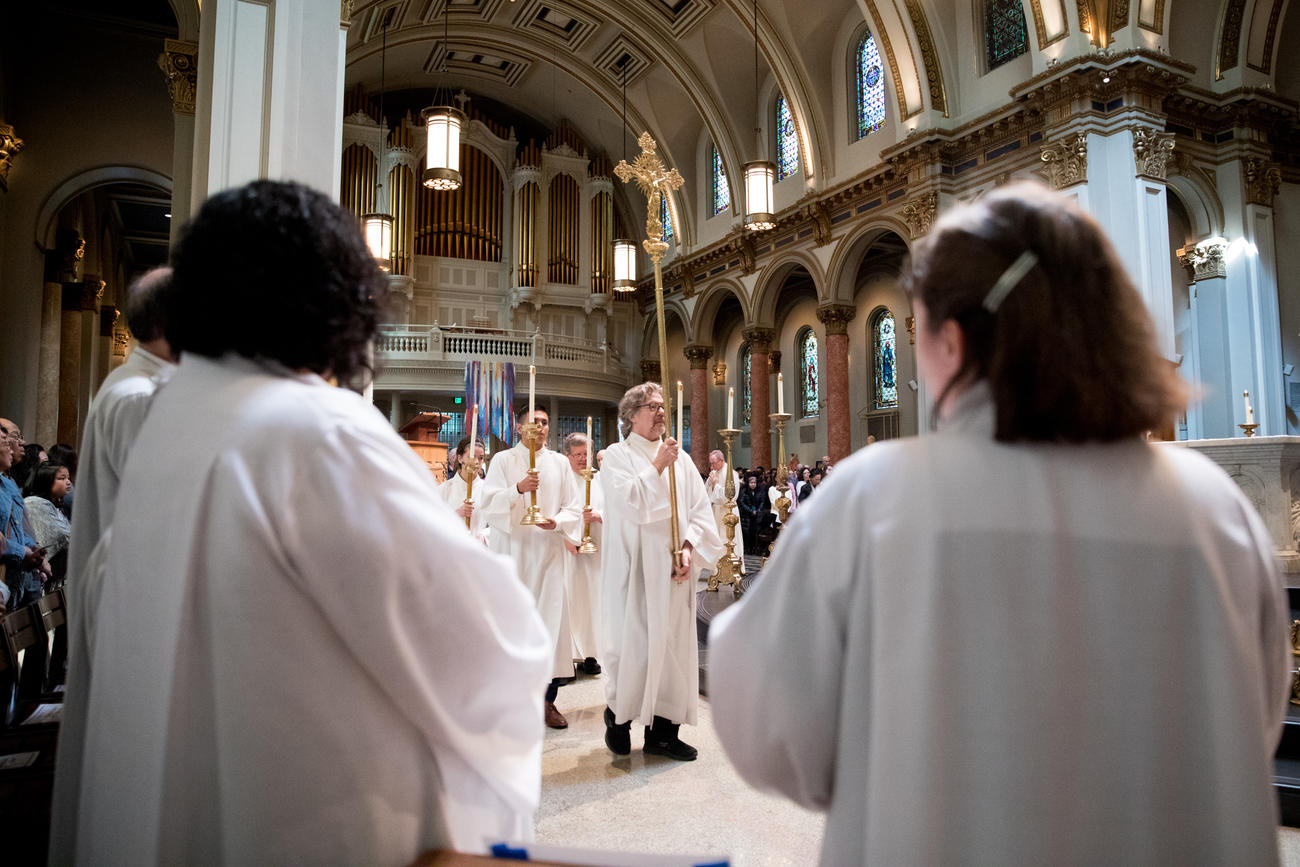 A procession at the beginning of Mass at St. James Cathedral in Seattle.

A procession at the beginning of Mass at St. James Cathedral in Seattle. 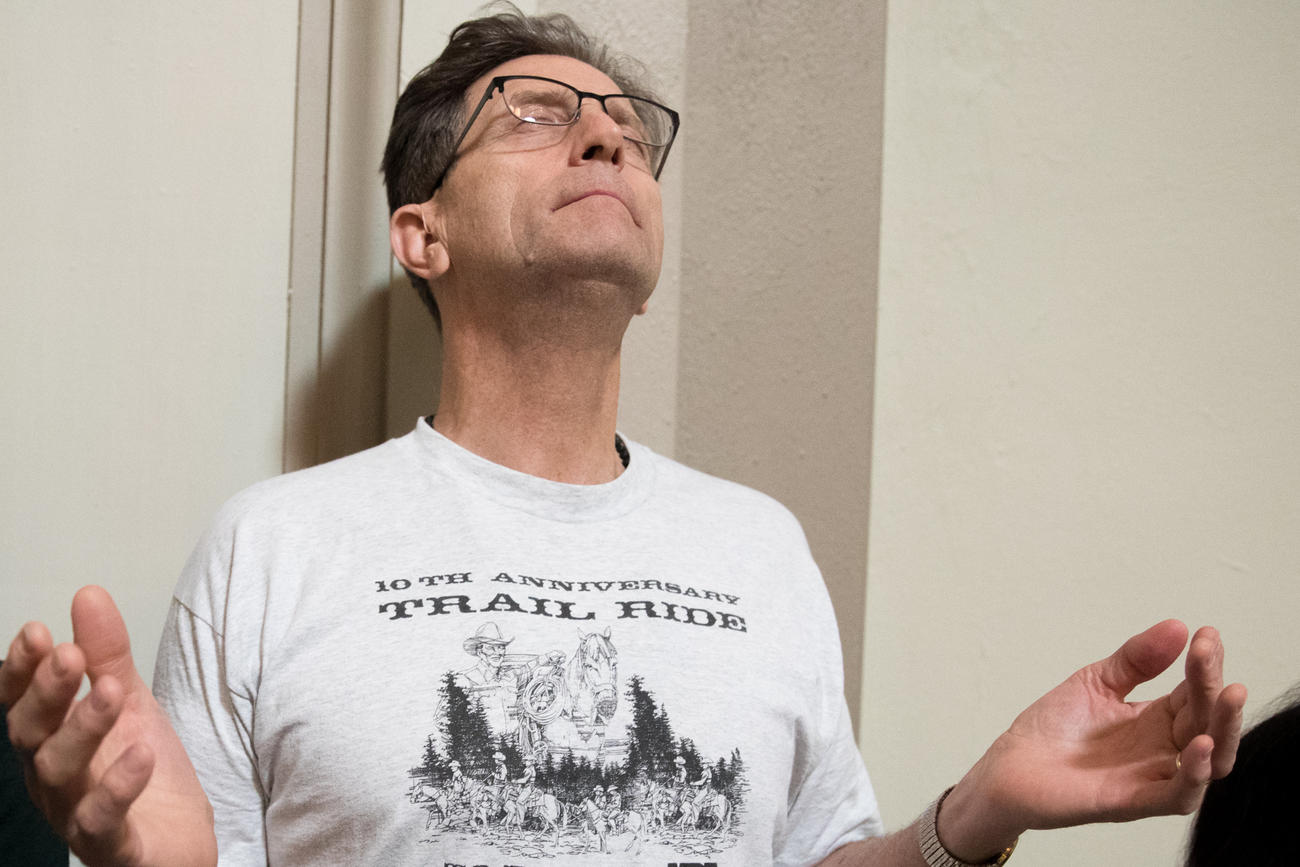 A man closes his eyes in prayer, palms facing upward, during a public veneration of Padre Pio's relics at St. James Cathedral in Seattle.

A man closes his eyes in prayer, palms facing upward, during a public veneration of Padre Pio's relics at St. James Cathedral in Seattle. 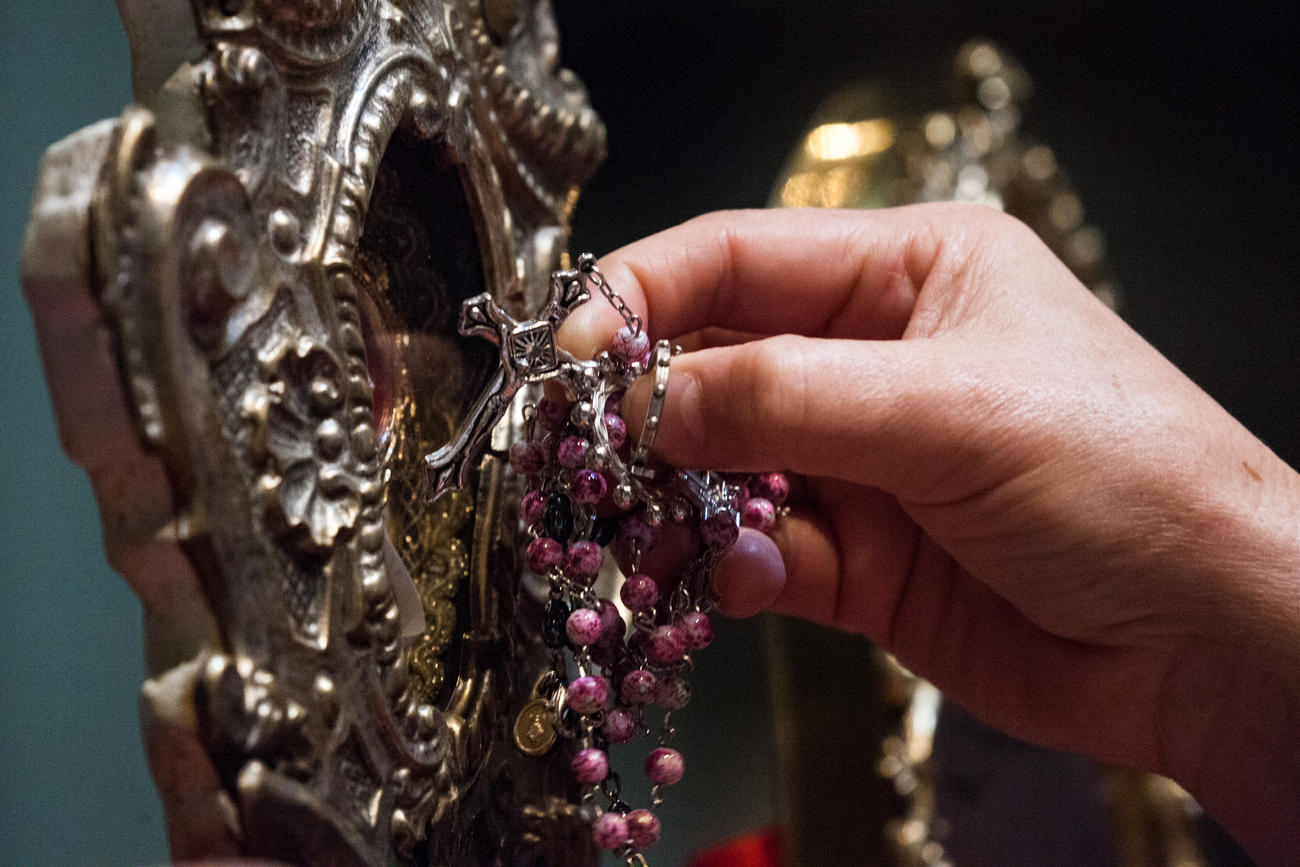 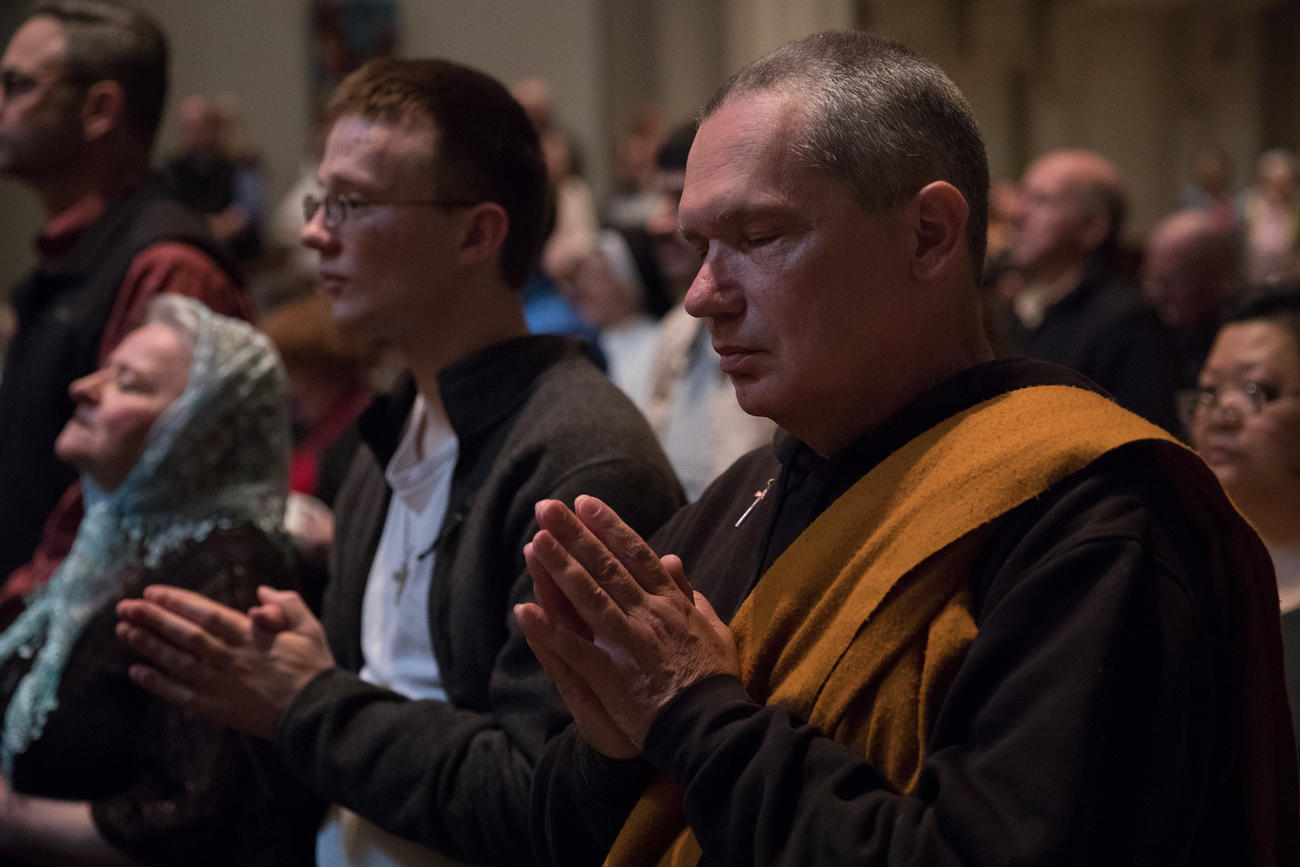 During the Mass at St. James Cathedral in Seattle, various parishioners closed their eyes in prayer.

During the Mass at St. James Cathedral in Seattle, various parishioners closed their eyes in prayer. 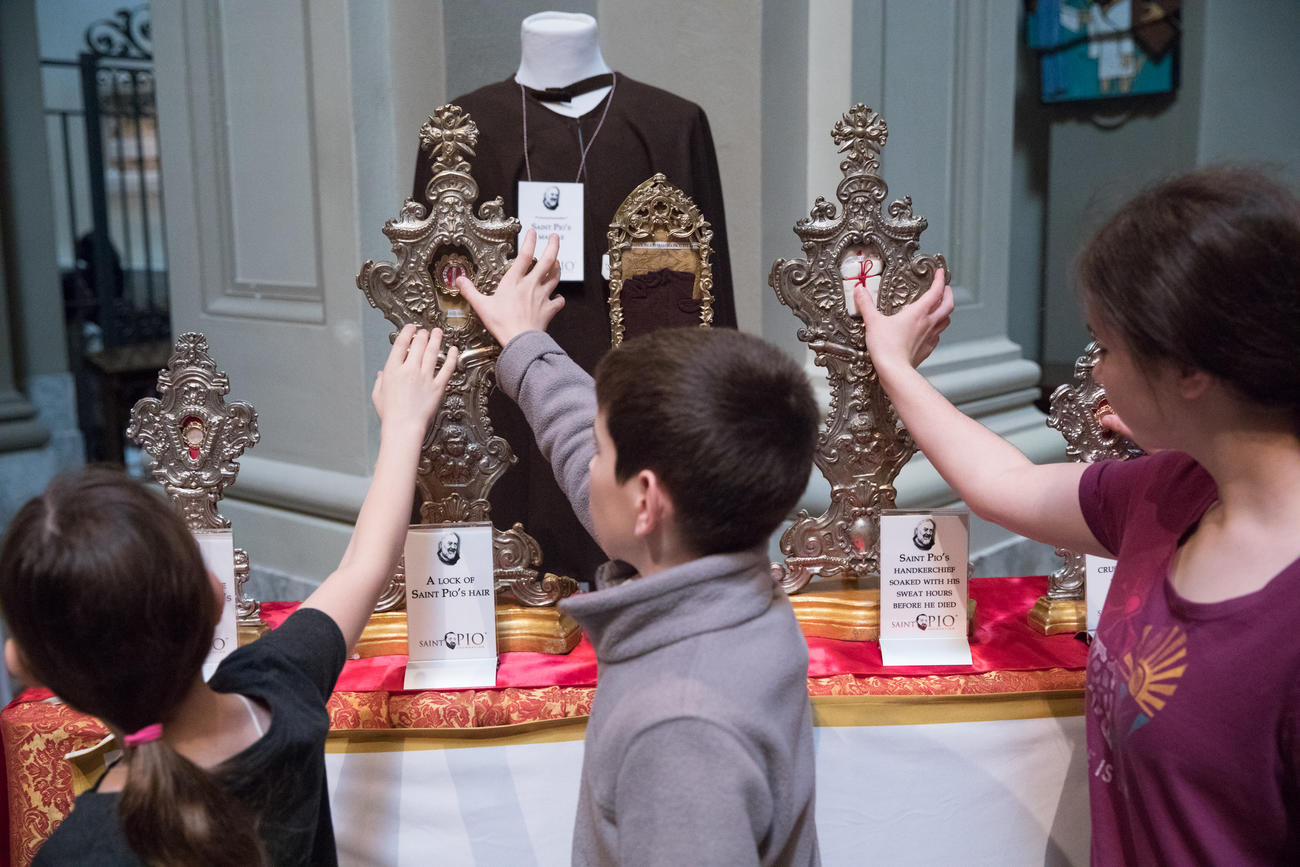 Children visiting St. James Cathedral in Seattle were granted an opportunity to touch Padre Pio's relics during the public veneration.

Children visiting St. James Cathedral in Seattle were granted an opportunity to touch Padre Pio's relics during the public veneration.

After the Mass on Saturday, a long line of worshippers then lined up to see the relics up close. The line stretched outside the cathedral, where prayer cards in both English and Spanish, considered relics themselves because they contain a patch of cloth that once touched one of Padre Pio’s remains, were available alongside a book about the saint.

One by one, parents, grandparents, children and other faithful approached the relics that were encased in glass, reaching out with their hands, a prayer card or a rosary. Some looked curious; others appeared deep in thought, as if they had long waited to see the holy fragments. Relics serve as reminders of saints who are thought to help ensure God hears the prayers of the faithful.

It took more than six hours for everyone to see the relics. Padre Pio’s relics are heading to Merida, Yucatan, Mexico next, where they are expected to attract an even bigger crowd. 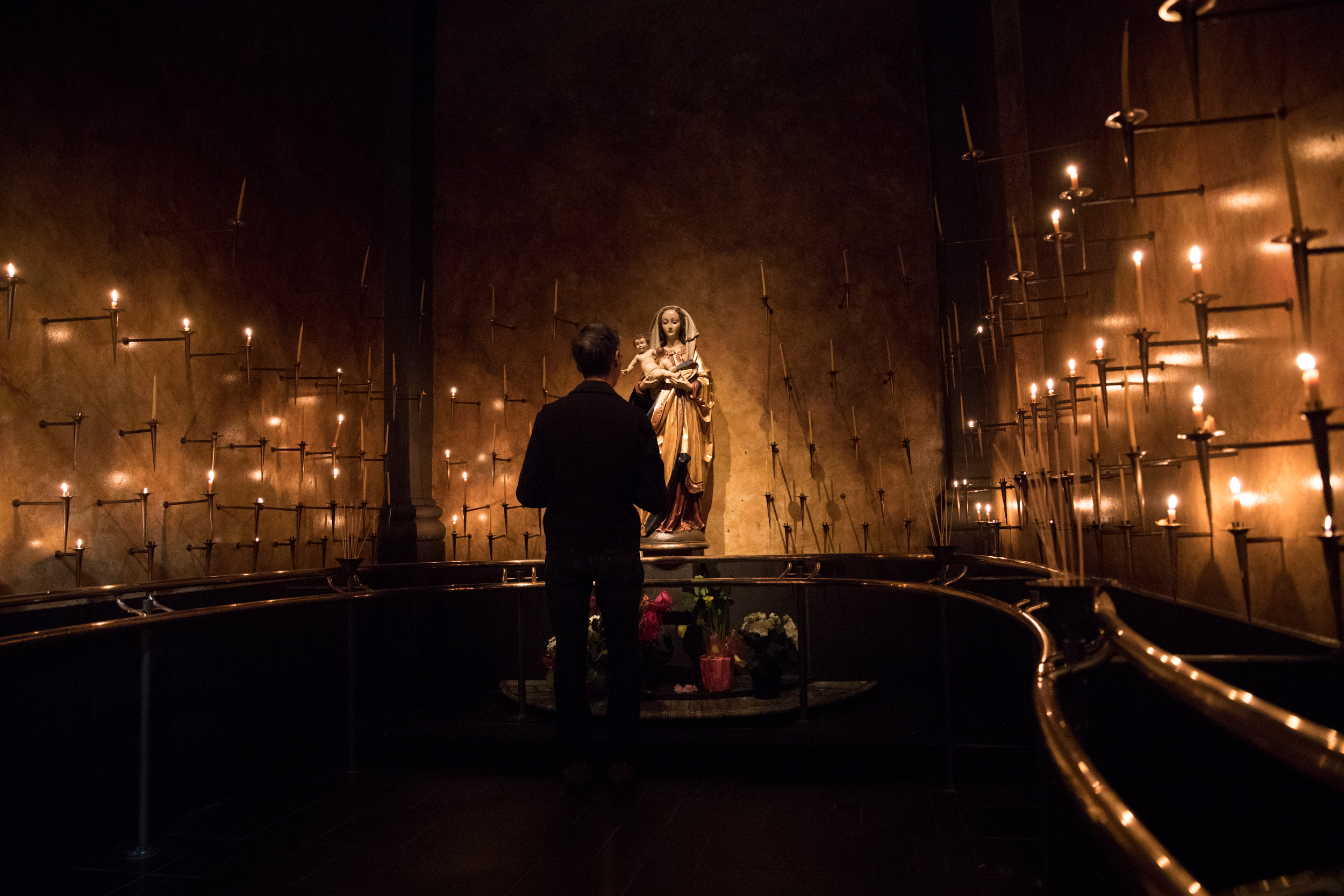 A parishioner stands inside a candlelit altar with the Virgin Mary and the baby Jesus during a public veneration at St. James Cathedral in Seattle.

A parishioner stands inside a candlelit altar with the Virgin Mary and the baby Jesus during a public veneration at St. James Cathedral in Seattle.