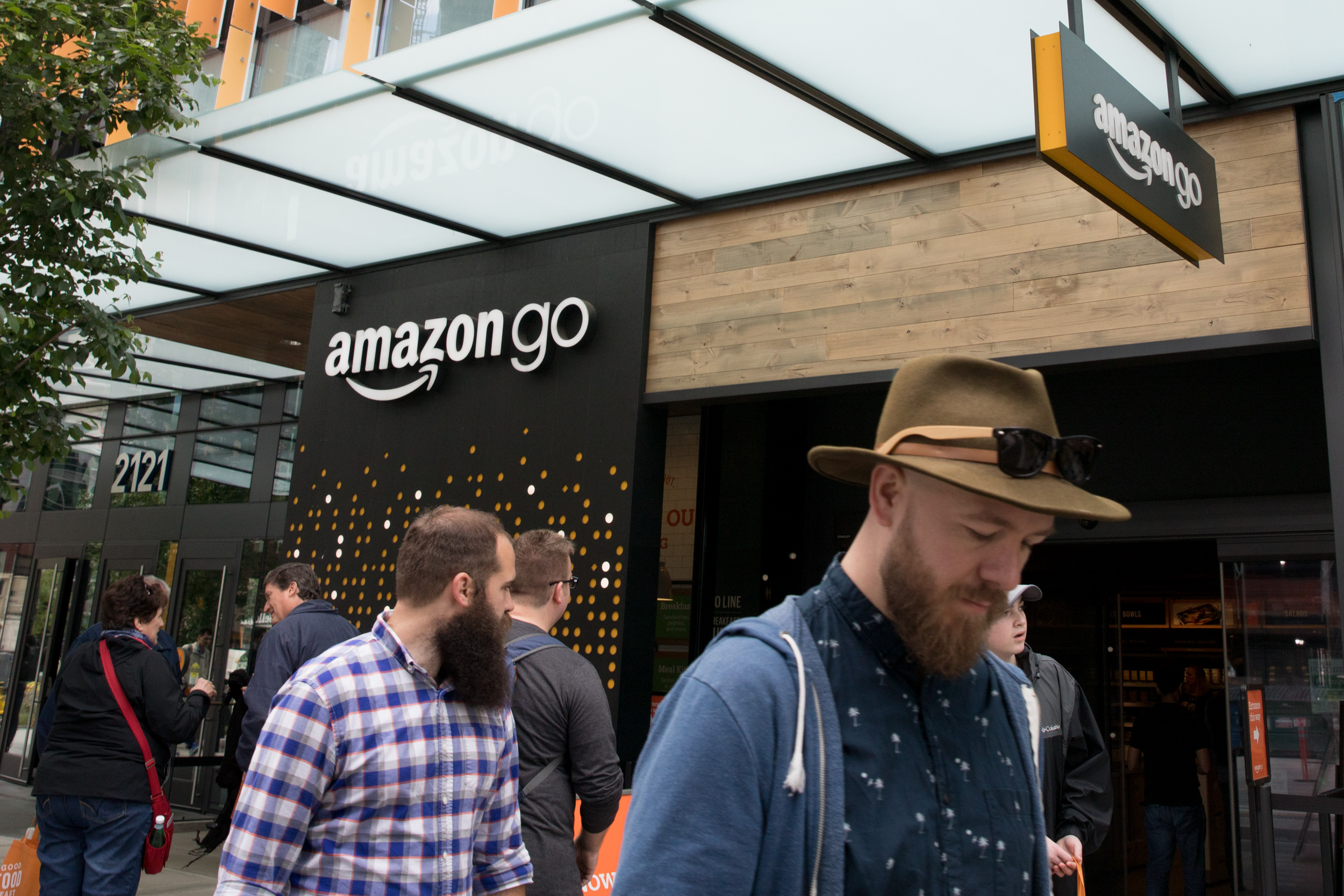 Pedestrians walk past the Amazon Go store near the Amazon campus in downtown Seattle, May 10, 2018. (Photo by Matt M. McKnight/Crosscut)

Amazon’s resistance to an employee head tax — or jobs tax as opponents call it — should be no surprise. Amazon is a tax-averse company. Jeff Bezos chose to locate here because of Washington’s tax structure (e.g. no income tax). And remember back to Amazon’s beginnings in 1994: The original business model was based on not collecting sales taxes in most states.

Seattleites tend to think that successful local companies that prosper here should then behave like private foundations, paying the community back in enlightened self-interest (providing perhaps help with transportation infrastructure to earn good PR) or at least helping to mitigate harm their business model has caused (driving up cost of housing). That’s understandable.

But Amazon is in the business of disruption, of turning the world on its head and to its advantage. That disruption has included eBooks and Kindles, clerkless-retail outlets, experimenting with drones, and “employing” more robots in its distribution centers.

Do we really think imposing an employee tax on a company that is dedicated to the destruction of human jobs is a good idea?

Sure, Amazon is growing and hiring now, but AI, robotics and automation will likely cost many jobs in the long run, especially those not requiring an expensive STEM education. Do we need to give Amazon an incentive to speed up that process? Do we need to make it harder for other large employers of humans within the city limits?

Much of the tech industry, Amazon included, has been driven by guys dedicated to science fiction fantasies. Paul Allen has his science fiction hall of fame at MoPop, Elon Musk says the book that changed his life was Hitchhiker’s Guide to the Galaxy, and Bezos considered naming Amazon “MakeItSo.com” in tribute to the Enterprise’s Capt. Jean Luc Picard’s catch-phrase in Star Trek: The Next Generation.

Many tech companies have also been built on the nexus of libertarianism and science fiction. It’s no wonder that all of the men above are devoted to creating a private space program. Want to bet whether Amazon’s HQ4 will be on Mars?

Which explains why Bezos is willing, as he said recently, to spend his fortune on space travel. Growing that fortune on Earth to pay to reach the ungoverned stars is a motivation.

Such lofty visions are at odds with the city’s problems on the ground. I’m reminded of a 1967-68 report from the Puget Sound League of Women Voters that worried, “Americans will soon be standing in waste up to their knees, launching rockets to the moon.” The waste they were speaking of was pollution, not specifically the detritus of homeless encampments, but the tension in the comparison is apt: A city’s job is dealing with the problems on the ground, like potholes or people forced to sleep under on-ramps. Bezos’ eyes are on the heavens, the ground just a means to get there.

It’s not surprising that so many eyes are on Seattle to get Amazon to help with equity, affordability and the homeless — the problems have been exacerbated by the company’s success. Yet, this also echoes another time when Seattle was dependent on one large employer that let us down.

In 1971, Boeing was in a down cycle and had laid off some 60,000 employees, causing the so-called Boeing “Lights Out” recession. That’s like losing Amazon overnight.

In recovering from the early 1970s downturn, many in Seattle swore we would never again let the city be so reliant on a single company. Boeing rebuilt into a still-robust if less dominant player, but in the 1990s it came under local criticism for its impact on sprawl, the environment and quality of life. In 2001, the company announced it planned to move its headquarters. That damaged a symbiotic commitment that had lasted for over half a century.

Boeing undertook to consider new locations for its operation. Denver, Dallas-Fort Worth and Chicago were on the list of candidates and each of those metro areas bid for Boeing’s favor. Sound familiar?

Chicago won. Not only did Boeing gain a new HQ, but new leverage over Washington state to go to the political well again and again for legislation, subsidies and investments to keep remaining Boeing plants open and workers here.

Then, as now, we struggle with what author T.M Sell calls the “paradox of growth.” Sell is author of Wings of Power: Boeing and the Politics of Growth in the Northwest and is a professor of political economy at Highline College. The problem is that outsized corporate success can change a place. Prosperity produces both wealth and downsides.

Sell says Boeing has been a better corporate citizen than Amazon appears to be so far, but they still got pushback from unions, politicians and greens on issues like traffic, sprawl and the loss of open space. He cites a speech by Boeing’s one-time CEO Frank Shrontz who complained there were always those “who do not think we’ve done enough.”

So we’re in familiar territory with Amazon, with HQ2 offering them more leverage: Play ball or watch us stop construction (upon which Seattle city coffers are notably dependent) and shift jobs to other “Seattles,” like Boston and Vancouver, let alone HQ2.

The Seattle City Council, with its head tax, is clearly saying that Amazon has not yet “done enough” to mitigate the downsides of its success. Sell believes the task is to find balance between the public and private sectors, but that the balance is virtually impossible without a better overall state tax system, he says. Washington’s tax revenues are not growing at the rate at which incomes are rising, “so we’re not keeping up with the costs of growth,” he concludes.

He’s not at all certain we’ll figure it out. “If Seattle doesn’t succeed in cooking the golden goose, I’ll be surprised,” he predicts.

I find myself in an odd position. That is, I don’t favor the head tax as proposed. The funding should be much broader based. But my least worry is making Amazon upset.

In fact, I wouldn’t lose any sleep if they walked because of the tax or some other reason. This is on the same principle Seattle has taken toward sports franchises: City taxpayers should not be a bottomless bank for subsidizing billionaire owners. Amazon has every right to go or stay based on what’s right for their business. The truth is, that is and has always been out of our hands.

What is also true: This region was a great place to live before Amazon was conceived. It will be a great place if it leaves too, though adjustment might be hard.

Painful as it was, the Boeing recession of the ’70s produced some positive long-term results. The recession had the effect of turning many former Boeing employees into entrepreneurs and the economy did diversify. Not only a diversified and more entrepreneurial economy that was able to leverage what remained of Boeing’s operations, but the downturn helped lead to the revitalization of down-in-the-dumps Pioneer Square and the “saving” of the Pike Place Market by mobilizing the public to fix up and invest in the city, steering us toward a better form of urbanization than sprawl. Bistros, galleries and tourism flourished. T.M. Sell points out that only 15 percent of laid-off Boeing workers left the region back in the ’70s, and when Boeing moved its HQ to Chicago only half of the employees expected to move did so. The rest retired and stayed behind.

Seattle is a sticky place, Amazon or not. People who move here tend to want to stay. Of course, Amazonians are not as settled as the 1970s Boeing salarymen and may prepare to decamp for the next tech hotspot. Still, instead of getting trapped into endless appeasing big companies that wield threats, it’s better for us to start preparing for a sustainable post-Amazon economy. That seems like a smart move while at the same time redoubling our efforts for massive tax reform to make paying for the damage of “success” more equitable in the long run. That won’t eliminate the “growth paradox,” but it would give us more tools for handling it.