Seattle’s new waterfront design will play to your instincts 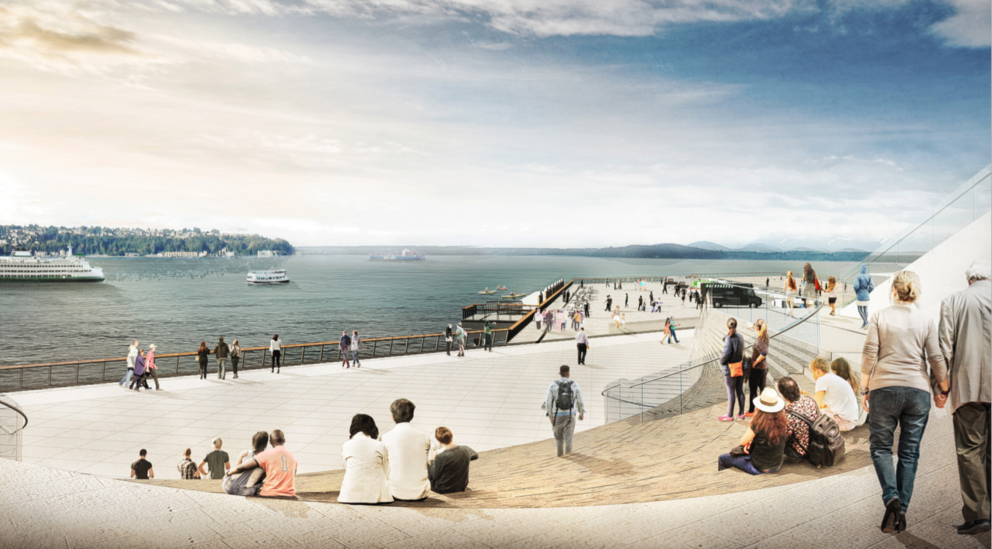 A rendering of the bay steps at the end of the Overlook Walk. (Courtesy of City of Seattle Office of the Waterfront)

The Overlook Walk could very well be the biggest thing in post-viaduct Seattle, a new piece of infrastructure that changes the city. Even though city planners have strived to be process-perfect, few are aware of it. It’s the elephant of the waterfront, with so many pieces it’s hard to envision it as a whole. What is it, exactly?

It’s complicated. The Overlook Walk would be a kind of land bridge over the cliff — a deck and pathway of varying widths and slopes, including one bridge span, all laid atop three large new buildings. Taking off from MarketFront, the year-old addition to Pike Place Market, it would land with branching stairways on a plaza in front of Pier 59 (the Seattle Aquarium) and Pier 62.

While the new street system takes cars past the waterfront, the Overlook Walk points over streets to the water, the mountains, the Seattle Aquarium and the historic piers.

No traffic would have to be negotiated because by the time it’s built, the main trunk of a re-built Alaskan Way — Elliott Way — would be underneath it, heading up the cliff, on the footprint of the old viaduct, to Belltown. A slimmer Alaskan Way would turn back again toward the water and follow the shoreline, as it does now.

I told you it was complicated, and it’s not exactly a done deal.

About $200 million of the $688 million price of the rebuilt Seattle Waterfront is to come from a local improvement district, a contentious plan for assessing downtown property owners now awaiting Seattle City Council approval.

The design team is led by James Corner Field Operations, under the City of Seattle Office of the Waterfront. Environmental impact has been assessed and many public outreach events have been held since design began in 2012. Adjustments and refinements have been made. The Overlook Walk is likely to be approved by the Seattle Design Commission after one more review at a not-yet-announced time.

Look for the viaduct to be dismantled next year. After that, work on the roadways and the Overlook Walk structures would begin. If it moves forward, the whole thing should be completed by 2023, in tandem with the Seattle Aquarium’s new Ocean Pavilion, an exhibit building that would tie in with the Overlook Walk in a new plaza along the shore.

The basic job of the Overlook Walk is outrageously ambitious: to connect the urban shore — long cut off by our aerial highway — to the city. When it comes to transforming the waterfront, this is the big move. It’s not perfect. It’s not magic. And it’s definitely not even well known or understood, despite all the process.  So how do we know it’ll be good?

One reason is that design success is based not on learned civic behavior, but on basic instincts, tested and proven. People like to walk in high, open places. Every outdoorsy Seattleite knows that. It’s true in the city, too. Discovered views attract them like a magnet.

That’s how the Overlook Walk would work. It would be Seattle’s best shot at a wide-open walkway with stunning views of the city, water and mountains.

The Overlook Walk would be very visible from down on the waterfront. But from the top, it would be a discovery, hidden behind MarketFront, the western extension of Pike Place Market completed a year ago.

The multi-level MarketFront stands in plain sight along Western Avenue, hooking up with Pike Place Market’s old Desimone Bridge above. It’s truly revealed by walking through one of the portals off Western Avenue or crossing from the Market through the bridge onto the upper deck.

Pedestrians are already voting for the Overlook Walk with their feet — they just don’t know it. They’re clustering at the outer edge of MarketFront, where a switching path slopes down to Victor Steinbrueck Park and then heads south. If it’s not raining, visitors stream out onto it most hours of the day, gathering at the rail.

Heads bob over as if looking for a secret path down to the water. For now, they just get four lanes of thundering traffic on the Alaskan Way Viaduct, our aerial highway. After the viaduct is dismantled and the new Alaskan Way multimodal corridor is underway, they’ll be able to break free on the Overlook Walk, strolling easily toward the bay and down to the shore without ever losing the the sweeping view. It will work like a people funnel and a majestic promenade. Some will stop and gawk.  Some will use it as a park. For many it will just be the best way to walk to where they want to go.

They’ll get a succession of views and experiences, and choose their pace. Starting at the new built-out edge of MarketFront, the main path will zig and zag once more on a landscaped roof with planting beds and places to perch. A new café structure along the inland side will look familiar — like it goes with the café space in MarketFront that now houses a brewery. Sturdy slides for the adventurous are shown in drawings, among the planters.

Drawings also show a curved, bridging pathway crossing over Elliott Way and settling to the shore, wrapping part way around the new Ocean Pavilion with one stair. Another stairway leads northwest, framing a kind of arched gateway to the waterfront from Elliott Way.

The three design teams — New York’s JCFO for the Overlook Walk, and Seattle’s Miller Hull Partnership (for MarketFront) and LMN (for the Ocean Pavilion) — are collaborating to make a seamless connection with the Ocean Pavilion, Seattle Aquarium’s planned home for crowd-pleasing tropical Pacific exhibits, education and support facilities.

The big element that makes this seamless connection possible is a functional roof, structurally sufficient to carry crowds over the top of the pavilion to more views, and an optional ride — one of three planned elevator towers serving the Overlook Walk. This, the elevator, that is, could stop the parade, given the City of Seattle’s less-than stellar record maintaining its main lift on the waterfront near Bell Street Pier. There could be a lot of frustration at the bottom.

The pavilion is now shown as horseshoe shaped in plan, like a landform, but with many openings for tantalizing peeks at the watery interior. It’s likely to have some stunning, crowd-pleasing exhibitory, like the viewing wall near the entrance of the existing Seattle Aquarium, and a combination shark tank and skylight — a “sharkulus,” as LMN’s Mark Reddington called it.

Aerial drawings show that the Overlook Walk changes character as it crosses over Elliott Way to the next building —  from an angular wood-and metal shed to curvy molded concrete. It looks like an extension of Pike Place Market above and a sinewy, modeled concrete based. This is jarring, if you’re longing to see the Overlook Walk appear as a whole. Maybe the next review will show more blended elements.

Thanks to last year’s stealthy first step — MarketFront — the Overlook Walk may seem to users like it’s always been there, and only their viewpoints have changed. That would be a win for the designer, but not the first. JCFO gained international fame in the last five years for the design of the High Line, a popular linear park on top of an abandoned railway trestle in Manhattan’s West Side.

From one end to the other, the High Line is long enough to have conversations of many lengths, while passing through a forest of towers at mid-level. The views are stunning, and there is a stream of pedestrians on top throughout the day, except in bad weather. There are a few places to walk out from buildings, and some strategically placed elevators, but it seems most users are able to find one of the stairways and climb about two stories up to the High Line deck.

Philanthropy helped pay for the High Line, and local philanthropy would help to pay for the Overlook Walk and maintain it. That’s not a coincidence — it’s a trend in rich cities like Seattle. No matter how good the idea, non-road public infrastructure is hard to sell to taxpayers. The Seattle Aquarium has recently refreshed its own private fundraising efforts.

But New Yorkers had their own version of the Seattle Process for the High Line, anyway. JCFO’s Tatiana Choulika, who is now in charge of design for the Overlook Walk, was there. She remembers one tough question: Why would anyone go up there? Why indeed.

Nothing is certain about the future of a city. The Overlook Walk looks like a good way to get there.