Sick of living in poverty, UW student employees walk out

Student employees at the University of Washington staged a one-day strike. They have threatened to escalate again should contract negotiations run awry. 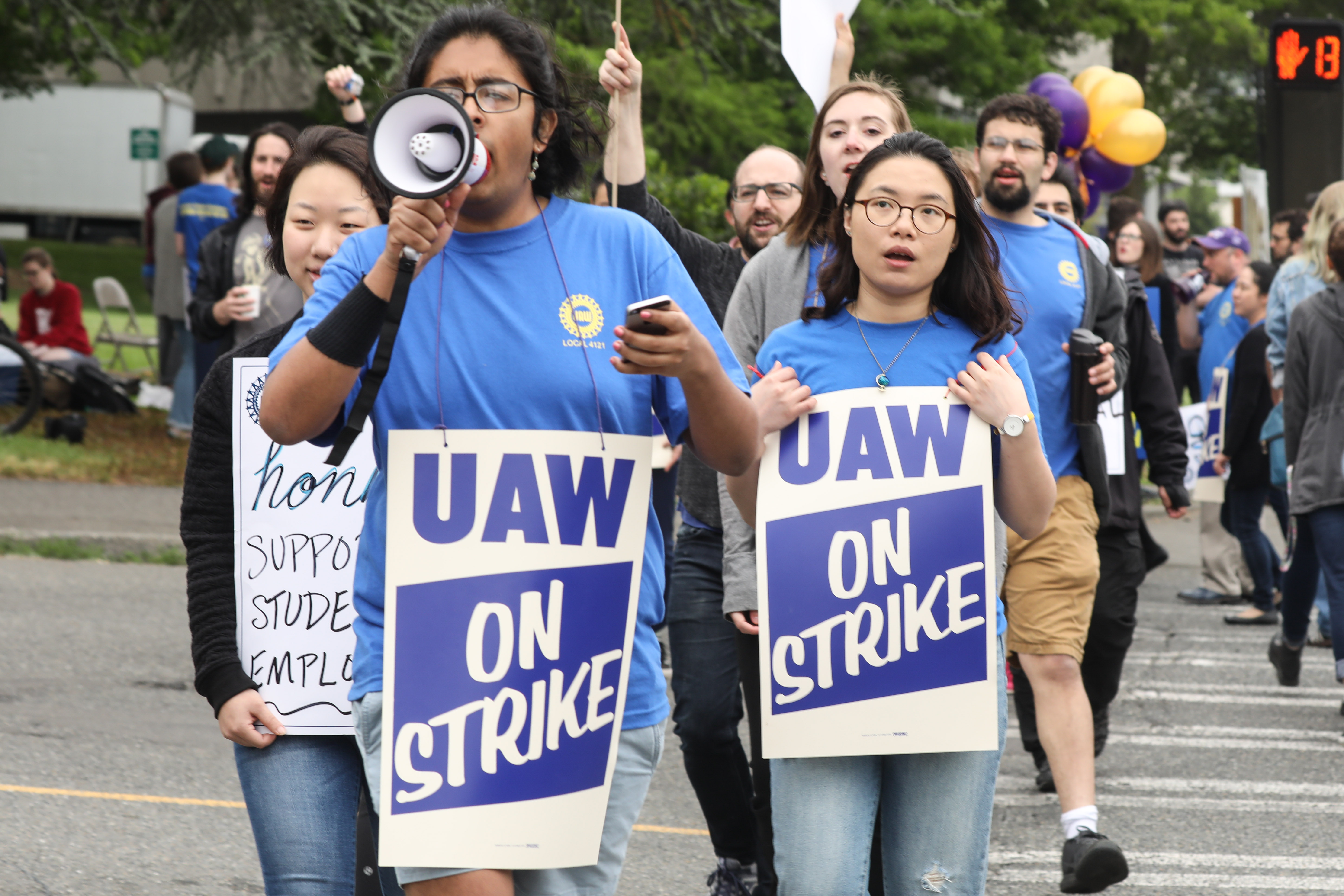 UW student employees march across the intersection of Pend Oreille Street and Montlake Boulevard NE during a one-day strike at the University of Washington in Seattle on May 14, 2018. (Photo by Matt McKnight/Crosscut)

At the end of April, Emily Willard's monthly income of $2,380 had shrunk to $23.57 after expenses. She is a Ph.D. student at University of Washington, studying women's involvement with armed groups in Central America and working as a research assistant at the Center for Human Rights.

On Tuesday, gripped by uncertainty and righteous anger, Willard joined thousands of other student employees striking across UW’s three campuses in Tacoma, Seattle and Bothell.

They walked off the job and took to a porous picket line following stalled negotiations between the university and United Auto Workers 4121, the union representing 4,500 graduate (and some undergraduate) employees who mostly teach, research, tutor and grade papers. The student employees have pushed for 3 percent wage increases in 2018, followed by 6 percent increases the succeeding two years. They are also asking for fee waivers, which amount to about $300 per quarter, and are demanding a health care package that includes improvements to mental health care and expands coverage for trans-affirming procedures.

UW maintains that student employees, who can work a maximum of 20 hours a week and receive tuition waivers, have seen significant raises in the last five years, investments that have brought their salaries — between $2,295 and $2,714 a month — up to levels comparable with peer institutions. During negotiations, the university has proposed 2 percent-per-year wage increases for the next three years, maintaining that this is in line with what other faculty and staff have received. The union argues this is not sufficient to keep up with the rising cost of living in Seattle.

The university, however, says that student employee wages have increased “by a compounded 50 percent” in the last five years. The UW conceded Monday night to some of the union's health care demands.

Before she came to UW, Willard worked as a research associate at the National Security Archive in Washington, D.C., where she helped collect evidence on perpetrators of human rights abuses in El Salvador and Guatemala.

It was invigorating work, made richer because she could teach aspiring researchers about tools that help bring war criminals to justice. Willard loved working with young people and hoped to one day become a professor. But three years into a Ph.D. at the Jackson School of International Studies, she is at pains to imagine that future. “Looking at what the reality is and trying to think things through logically and practically, the numbers don’t add up at all,” she says now about the possibility of finding work in a saturated academic market.

Even if she does find work, Willard says it will probably be out of state — and she fears she won’t have the money to move. She already can’t afford a laptop, regularly borrowing one through a student technology loan program on campus.

Willard lives with her two cats in university housing, in the smallest unit available, which she feels lucky to have even though rent costs more than $1,200 a month. (After a mold problem forced her out of a previous apartment, she had to break the lease; this complicated the search for new housing because her record showed an "outstanding lease.") She’s paid off her student loans and has no major monthly expenses aside from rent and groceries, which amount to well over half of her income. Add in other basic expenses and a little bit of savings and all of a sudden her money is gone.

The “disturbing part to me is the fact that I’m a relatively simple case,” says Willard, who adds that her fellow colleagues with debt, children, health problems and other costly concerns have it much worse.

On Tuesday, hundreds of student employees took to the entrances of UW’s sprawling Seattle campus. They held signs and chanted, handing out fliers to passersby. By midday, the whole mass of them descended on Red Square to hear speeches from fellow union members and labor leaders. Mandy McCourt, a union negotiator and Ph.D. student in the Department of English, announced that a majority of student employees live below the poverty line.

Speech after speech, the energy in the square grew. A helicopter hovered above but it was drowned out by the noise below. At one point, Nicole Grant, the executive secretary-treasurer of the M.L. King County Labor Council, declared to the crowd: “You are the future of the labor movement in this country.”

Of the strike, Willard says, “We are making a very clear statement by withholding [our] labor.” But, she adds, “We’re really serious.” One day is not all “we’re capable of.”

The school year officially ends June 8 and grades are due four days later. Bargaining will continue in the meantime. 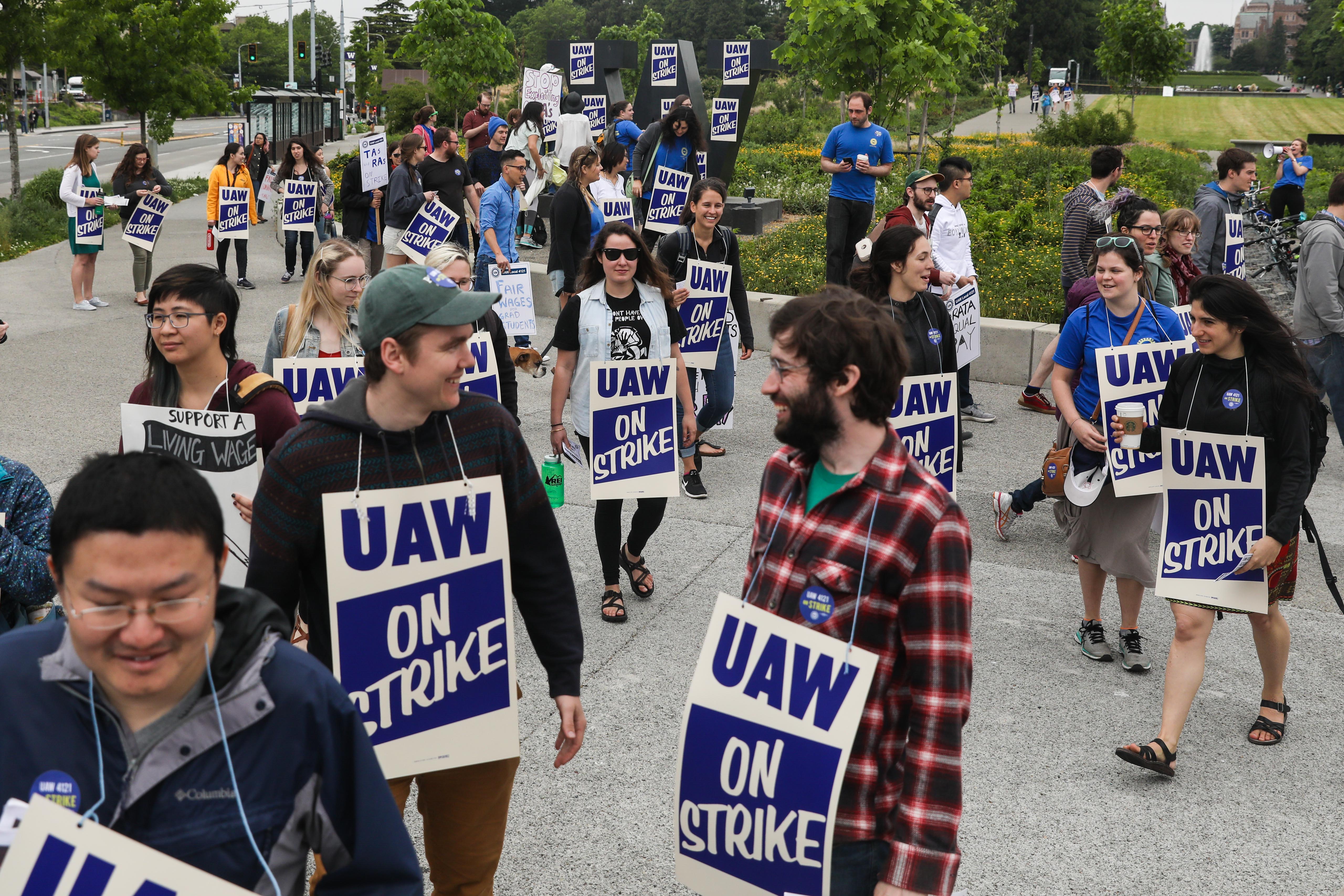 People gathered at the corner of Montlake Boulevard NE and NE Pacific Street during a one-day strike with graduate students who are represented by UAW Local 421 at the University of Washington in Seattle, May 15, 2018.

People gathered at the corner of Montlake Boulevard NE and NE Pacific Street during a one-day strike with graduate students who are represented by UAW Local 421 at the University of Washington in Seattle, May 15, 2018.