At SIFF: bearing witness to stories of ‘cultural genocide’

Dawnland chronicles Maine’s Truth and Reconciliation Commission as it collects stories of the Wabanaki people. 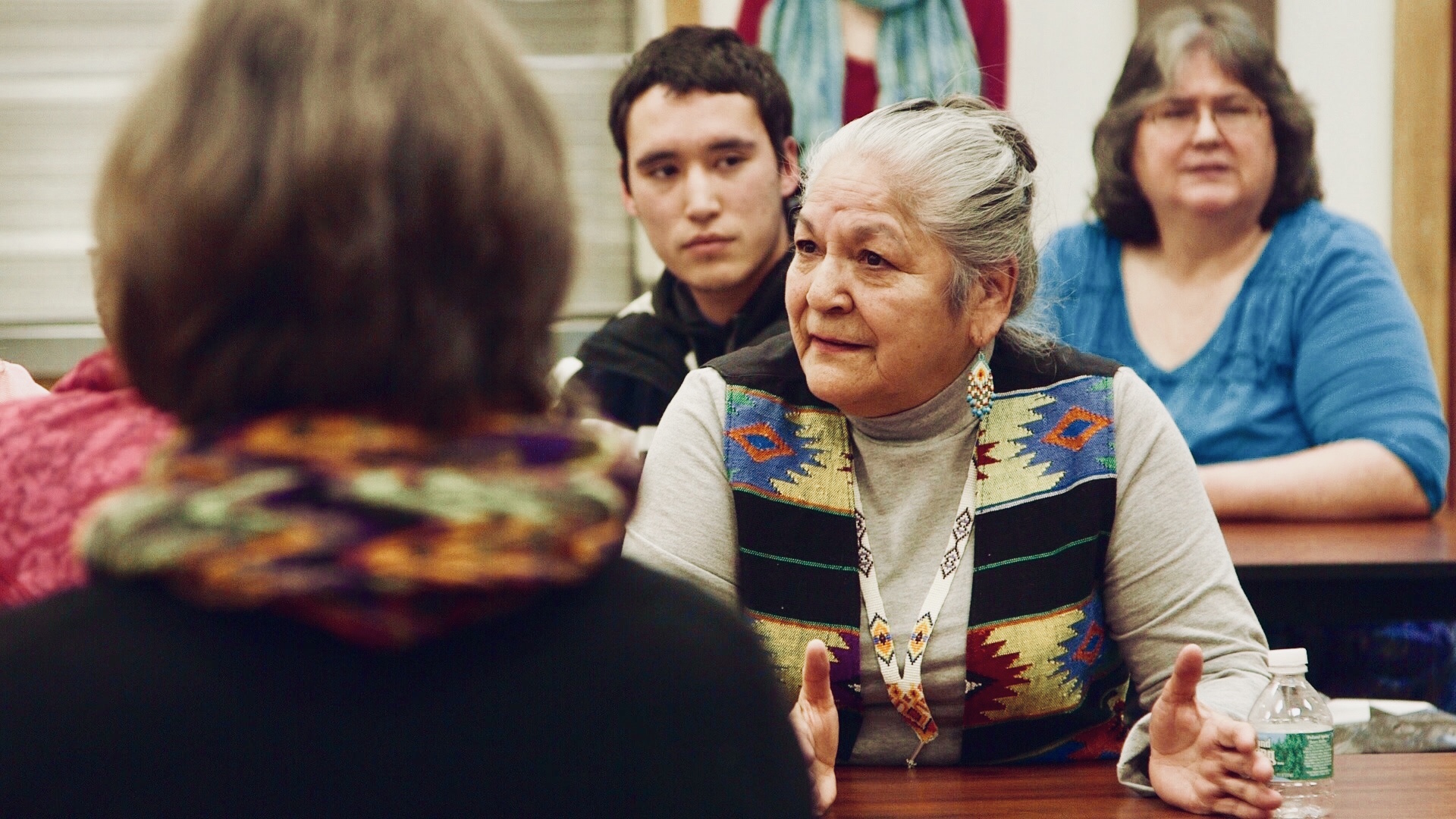 Georginia Sappier-Richardson shares her story at a Truth and Reconciliation Commission visit in Maine. Screen grab by Ben Pender-Cudlip from the film Dawnland. (Courtesy: Upstander Project)

To watch the documentary Dawnland is to experience having your stomach clenched in a knot. Native mothers weeping about having their children taken away from them; U.S. government policies stripping Native Americans of their culture; ‘reconciliation’ staffers fully aware of their white privilege but refusing to shelf it as they do cross-cultural work.

It’s all anguishing and infuriating to take in. It also makes Dawnland a powerfully illuminating film — a history lesson that you’re ashamed to have never learned but whose truths you’ll likely never forget.

Filmmakers Adam Mazo and Ben Pender-Cudlip spent five years completing their feature-length documentary about the forced removal of Native American children from their families into White adoptive homes, non-Native foster care and boarding schools. The government’s racist intentions — clinically explained in historic footage included in the film — was to “civilize” Native youngsters. The legacy of such policies can be seen in the continued high rate of Native children in foster care and in the tortured memories of those who wanted to embrace their cultural identity but who were told, sometimes violently, that they must not.

Those memories and stories fuel the narrative of the film as it documents the country’s first ever government-sanctioned Truth and Reconciliation Commission — created in 2012 in Maine with the support of the state's governor and five Wabanaki chiefs — to assess the “cultural genocide” that has taken place. The TRC, inspired by a commission in post-apartheid South Africa, attempts to bridge relationships with Maine’s Wabanaki people to fact find, record testimonies and rebuild trust.

Those testimonies are heartbreaking; in one story, a woman recalls sitting in a bathtub of bleach as a child because she so badly no longer wants to be Brown. But what adds even more to the emotional pull of the film is how the commission — made up of both Native and non-Native people — wrestles with its own views of how the work should be done.

Dawnland will be shown in a free public screening as part of SIFF on May 26 at the Seattle Central Library.  (The Dawnland team includes local Tracy Rector, who was a producer on the film).

Crosscut reached Adam Mazo, the film’s 37-year-old co-director, at home in Boston. This interview has been edited and condensed.

How did you find the story?

The magnitude of what the TRC was trying to do and the importance of the experiences of the Wabanaki people …we felt really strongly that this was a story that was very poorly understood if known at all. It was really extraordinary and compelling and people needed to see it and hear it for themselves.

How much knowledge had you prior to that about the removal of Native children from their families?

About as little as your average public school educated kid in this country. I was pretty ignorant about the foster care system and Indian boarding schools and all of the different things that the U.S. government and state government have done to abuse Native peoples.

So much of this film is about building trust and listening. How did you get so much access?

There was this collective spirit amongst the people doing this work that they were doing something remarkable and novel. I think a driving idea that came from Esther Anne (a Passamaquoddy tribal member) who's really kind of the godmother of the TRC, was that the silence is killing us. There wasn't going to be any way to heal without getting those stories out and having them be validated.

As two White filmmakers, what did you do to establish credibility or trust or just even an understanding with the Native community?

Very early on in the process, we started working with Bruce Duthu (who is Houma). He's the chair of the Native Studies department at Dartmouth and an expert in the intersection of state, federal and tribal law. We also have a really stellar executive producer, Heather Rae, who is Cherokee  [as are] Tracy Rector (Choctaw/Seminole ), our impact producer, and Jen Kreisberg (Tuscarora), our composer, and Chris Newell (Passamaquoddy) who's our senior advisor who helped a lot in the music but also in just watching cuts.

When we would go into communities, we were not shy about who we were. We did not try to pretend that we were something other than a couple of White guys directing this film. We would be honest about who we were and why we were there and just saying that we thought what was happening was important and that we wanted to be able to share that with the world, and that if folks didn't want to be filmed, they could always tell us not to film them or to turn off the camera.

As the film begins, the conflict here is set up to be Native people versus government policies. But what happens is there’s also the conflict between REACH (the advisory group) and the TRC and what's the biggest priority: fact-finding or reconciling?

REACH is focusing on healing, and the TRC is focusing on research and reconciliation, and those things, while seemingly complementary, when you get down to it, in this case, is not.

Ultimately, it seemed like the folks in the TRC came around to the idea of reconciliation meaning that non-Native people can reconcile themselves with the truth of what Europeans and Euro-Americans have done to Native people as opposed to this idea of truth and reconciliation means that the White folks and the Native folks are going to reconcile. They're going to get along.

There’s this idea that reconciliation often is looked at as bringing back together two things that were once whole and others have said Indigenous people and Europeans were never whole. It started in a very bad way between Indigenous people and Europeans. Europeans came in and were there to extract and to kill and to get resources and to Christianize. Reconciling that is a challenge and it's one of the focuses in the film.

We talk about this TRC in Maine being kind of a first because it was the first government endorsed commission and the first on Native American issues. There have not been other TRCs that we know of yet, however, there are lots of different kind of initiatives that are cooking.

There's a judge in Michigan who saw the prequel to Dawnland and wants to instigate a TRC in Michigan involving the tribes there.

Organizations in Eastern Washington are wanting to use the film as a tool with tribes in that area.

The film will air on Independent Lens nationally on PBS in the 2018-2019 season and we're super excited. As far as we know this will be the first time that Wabanaki people are featured on a nationally televised program.

If you go: A free public screening of Dawnland will be held at 1 p.m. May 26 at the Seattle Central Library downtown. It will be followed by a panel on Indigenous women leading social change featuring Sandy White Hawk, Madonna Thunder Hawk, Jennifer Fuentes, Mishy Lesser, Dawn Neptune Adams and Marcella Gilbert. The panel will be led by Tracy Rector.