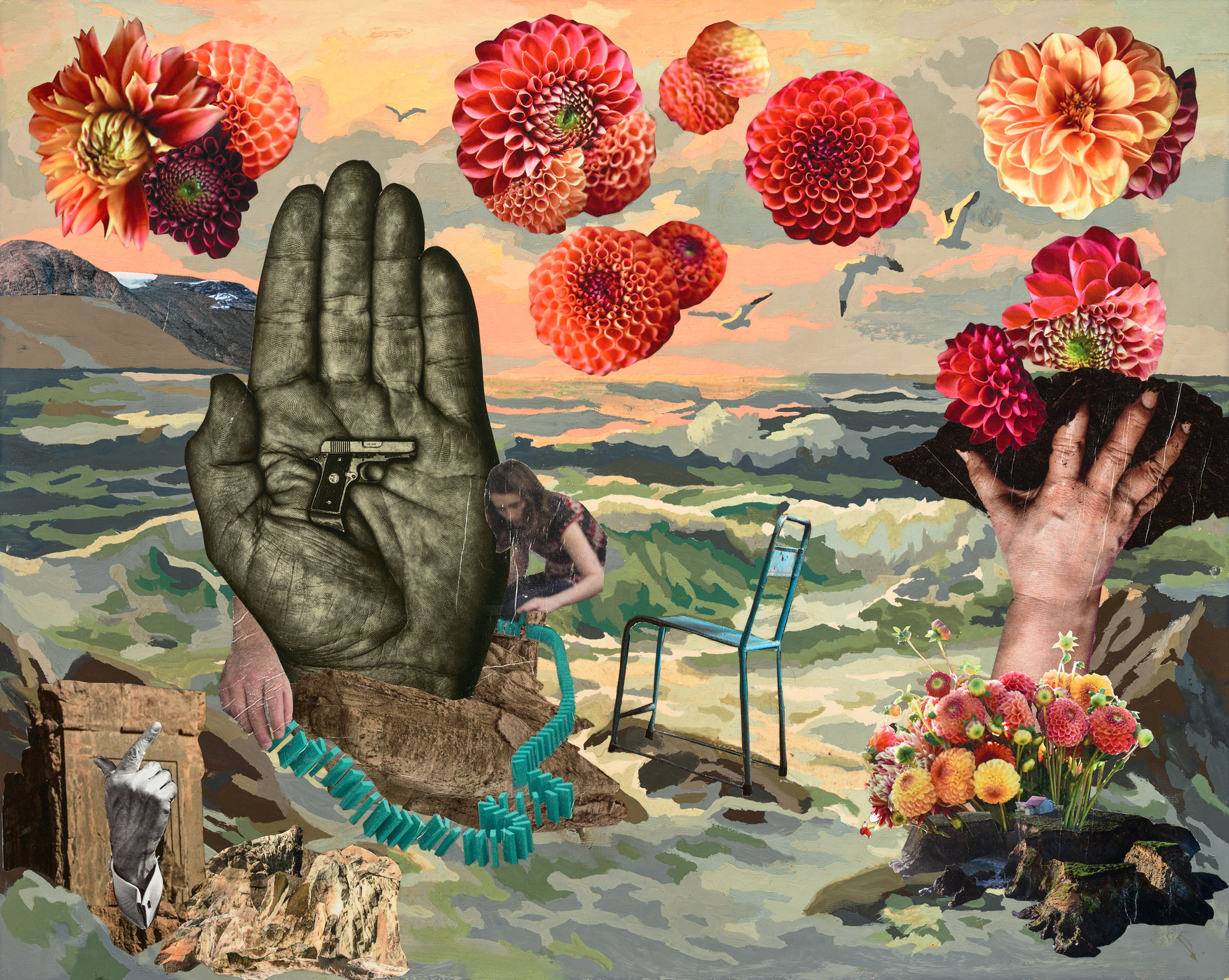 Seattle’s longtime arts promoter becomes the artist in her first solo show of vibrant collage work. The “Almost Live” alum and current host of Seattle Channel’s “ArtZone with Nancy Guppy” (and, full disclosure: a friend) starts with found paint-by-numbers paintings and enlivens the notoriously flat surfaces by layering them with intricately cut objects and shapes from magazines and books. And so, a disembodied set of teeth anchors a waterfall landscape, giant orange dahlias hover like spaceships over an ocean scene and fashionable 1960s ladies take over the Last Supper. “I can’t really explain what’s happening when I make them,” says Guppy. “I’m not using the thinking part of my brain, which is why I like doing it.” Whatever her process, the result is a wild ride that pairs nostalgia with something apocalyptic. —B.D.

Winner of the Pulitzer Prize for his 2015 debut novel The Sympathizer, Viet Thanh Nguyen came out of the gate with a book that seamlessly combined the thrills of a spy story with the political history of Vietnam and the complicated loyalties of an immigrant in America. His most recent collection of short fiction, The Refugees, proves he’s no one-hit-wonder. These stories reveal the Vietnamese-American experience—including harrowing memories, split identities and great big dreams—with remarkable insight, beautiful language and surprising humor. For this talk, he’ll be joined by Seattle’s own Jamie Ford, author of Hotel on the Corner of Bitter and Sweet. —B.D.

Say the phrase “Alaskan modern-art scene,” and not many images come to mind. But this new show at Edmonds’ Cascadia Art Museum does much to fill in the blanks. It’s dominated by Virna Haffer (1899-1974), the maverick Tacoma-based photographer, and Danny Pierce (1920-2014), a Seattle-area painter who moved to Alaska to found the University of Alaska’s first art department. Haffer’s Alaska work, from the late 1930s, includes stunning landscapes and seascapes, beguiling portraits, atmospheric town shots (especially her Hopper-esque “From a Juneau Hotel Window”) and a fascinating record of daily activity. Pierce’s paintings often take figurative sights and parlay them into colorful abstract territory. Sometimes it takes the titles — “Waterfall,” “Trees,” “Log Jam,” “Meandering Stream”— to clue you in to what you’re seeing. The show is rounded out with work by several other artists, including Pierce protégé Joseph Senungetuk, an Alaskan Native whose charcoal drawing, “Whither Thou Goest, Shaman,” is a striking, collage-like vision of tribal past and urban present. —M.U.

If you thought this year’s package holidays began and ended with Easter/April Fool’s Day, think again. Saturday is CInco de Mayo, Free Comic Book Day and the Kentucky Derby. Rifle through comic books in a floppy hat and satin gloves, then remove those gloves to devour some tacos. Of course, you can celebrate Free Comic Book Day at any of your favorite comic book shops around Seattle. I’ll be at Georgetown’s Fantagraphics, a comic and graphic novels publisher and art gallery. They’ll have copies of their Free Comic Book Day special, which includes new work by Simon Hanselmann, Sophie Goldstein and Carol Tyler. Local graphic artist Ellen Forney will be there at 6 p.m. to read from her new book Rock Steady: Brilliant Advice from My Bipolar Life. Her 2013 graphic memoir Marbles: Mania, Michelangelo, and Me, chronicled her diagnosis and struggles with bipolar disorder and it’s a must-read for everyone whose life is touched by mental illness. —N.C.

If you go: Free Comic Book Day, all around Seattle, May 5 (Free)

In this new piece by the San Francisco transgender choreographer, oral histories of the early AIDS epidemic — recorded in six cities across the country — are transformed into a “multi-layered sound score” for four dancers. In the trailer for the show, the movement looks fluid, shadowy and tender, as the four figures intertwine or are spotlight-steered into moments of isolation. “I’m sure many of us have blocked out pieces of this,” one woman says in voiceover. “I certainly know I have.” Dorsey calls the work “a love letter to a forgotten generation of survivors—those who witnessed and experienced the loss of part of an entire generation of gay and transgender people to AIDS in the 1980s and 1990s.” Velocity presents “The Missing Generation” in partnership with Three Dollar Bill Cinema’s Translations: Seattle Transgender Film Festival with post-show talks following all performances. This promises to be an evening of powerful, elegiac dance-theater. —M.U.

Translations Transgender Film Festival is the largest transgender film festival in the world and takes place right here in Seattle. The film festival will screen short films, features and documentaries from near and far — by, for and about — transgender people, all focused on positive representation. I recommend the shorts programs, Live in Your Power and In the Family. For the 13th year, local comedian El Sanchez is doing a stand-up comedy set on May 8, Rainier Beach Pool hosts an All Bodies and All Genders swim, and award-winning transgender dancer/choreographer Sean Dorsey is hosting workshops and more at Velocity Dance Center. —N.C.

If you go: Translations Transgender Film Festival, venues around Seattle, May 3-12 ($13)

For items that were intended as newspaper ephemera, the illustrations of Mexican printer José Guadalupe Posada (1852-1913) have had an extraordinarily long life — and you can see why in this traveling exhibit. Posada’s cheerfully macabre visions of skeleton lovers, skeleton work crews and skeleton bureaucrats were an influence on later Mexican muralists, most notably Diego Rivera. But his flights of fancy went beyond Day of the Dead whimsy. Witness his tabloid renderings of murder scenes, natural disasters and freaks of nature (“Strange Case! A Woman Who Gave Birth to Three Children and Four Animals”). Posada also dabbled in religious iconography, song-lyric illustrations and board games on broadsheets that players could buy for a penny (they sold in the millions). Originally, Posada was an illustrator-for-hire, but his work was so popular that, after his death, texts were tailor-made for already-existing images such as “The Great Pantheon of Love” (published after 1917). BAM’s new executive director and chief curator Ben Heywood will lead a panel discussion on Posada’s significance, 6:30 p.m., May 10, at BAM. —M.U.

Spring is nearly here! Now it’s time to seize the day and get some local, organic, sustainably grown plants at Tilth’s annual Edible Plant Sale, specializing in plants suited to grow in the Pacific Northwest. Whether you have the opportunity for a full garden, a container garden, or merely a front stoop, you can grow things. If you’re interested in small space gardening, I recommend local cookbook author Amy Pennington’s Apartment Gardening and Gayla Trail’s Grow Great Grub. —N.C.

Ambitious and innovative dinner theatre gem Cafe Nordo’s take on a Spaghetti Western, Smoked! opened last week to acclaim and runs through July 11. However, the next couple of Wednesdays feature Moonshine Revival Tent, a night of stories-with-songs. Local storyteller Bret Fetzer and singer and composer Sari Breznau will present 17 Debutantes and The Carny Girl, along with live bands The Half Brothers and The St. Judas Stringband. Cafe Nordo’s Mac ’n Cheese bar will also be available for purchase at the show and shouldn’t be missed. —N.C.