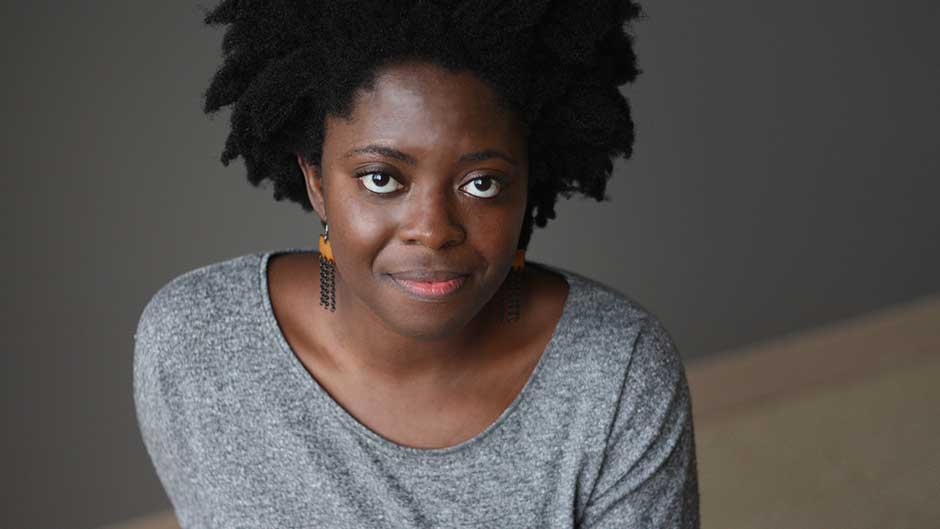 Yaa Gyasi will speak in Seattle this weekend about her new book Homecoming.

If you haven’t yet read Yaa Gyasi’s award-winning debut novel, now is your chance to do so — in the company of thousands of your neighbors. Seattle Public Library has selected Homegoing for the 20th installment of Seattle Reads (when the whole city is encouraged to read the same book). Gyasi, Ghanian-born and Alabama-raised, tells a story of the descendants of an Asante woman through two half-sisters who didn’t know the other existed. One branch of the family tree ends up in the in America, via slavery; the other stays in Africa. Both are grievously affected by the slave trade. Hear more about this epic and memorable tale of historical fiction when Gyasi speaks at two locations in Seattle.  —B.D.

When a formerly incarcerated person is released back into society, we expect them to feel immediately “free.” But the reality is much more complicated, as the transition to the outside brings forth exactly how much inmates are denied while behind bars. Even the things that seem normal for the rest of us are a challenge—including the ability to dream. Seattle filmmaker Lynn Shelton tackles this issue in her new movie, Outside In. This weekend, Brooklyn-based theater artists Cornell Alston (of Rehabilitation Through the Arts) and Kaneza Schaal (of Elevator Repair Service and the Wooster Group) offer their own take, in the form of a comedy of errors that uses 1950s sitcoms, debutante balls and dreams to explore moments of transformation. —B.D.

In an age where the terms "cliffhangers," and "binge-watching" apply even to cooking shows, the Norwegian Broadcasting Company’s Slow TV offers a different kind of viewing experience. Their most popular special, Train Ride: Bergen to Oslo is seven hours of the Norwegian countryside from a camera mounted on a train engine, making for an experience that is transfixing, quieting and soul-nourishing. Northwest Film Forum presents an evening of Slow TV with a live soundtrack, brought to us by the four member ensemble Postcard from the Badlands. I love Postcard from the Badlands, whose music is the perfect companion while soaking up the nature of a faraway land. Presented in collaboration with the Nordic Museum, which recently celebrated its grand opening in Ballard, this night will also feature Nordic treats. —N.C.

Tucked away in Federal Way, the Pacific Bonsai Museum is truly an underappreciated gem. In a tranquil, beautiful space this outdoor museum displays over 60 bonsai from around the world. At the annual Bonsai Fest!, take in bonsai-making demonstrations, learn about the intricacies of bonsai and, if you’re feeling inspired, buy a little tree and pot to kick-start your own hobby. There will also be a food truck each day, as well as a “Create a Gift for Mom” art station to make your own card and more. There’s no better time to learn about the styles of bonsai either. The latest special exhibit, Elements of Design, breaks down the history and visuals of these captivating creations. —N.C.

What happens to your sense of shelter when your mind starts to go? Seattle architect Robert Hutchison found himself facing that question when his father suffered rapid memory loss prior to his death in 2016. Hutchison’s response was to launch “a speculative project that investigates the topics of memory and mortality through the lens of architecture.” He began with an architectural model of a project that he and his father had co-designed 20 years earlier, and continued it with drawings and scale models that have a fastidious emotional punch. Buildings — a railroad roundhouse, a columbarium for storing crematory remains, a lighthouse that doubles oddly as a boatshed — are exhibited in states of incompletion. Their walls are cleanly sheared to expose their interiors. Their stairways lead to nowhere. The results are both rigorous and ravaging, especially in a life-size architectural model of a bare bones “Memory House for a Widow” whose interiors you can glimpse only by crouching down on your knees. —M.U.

If you go: Robert Hutchison, 4culture Gallery, through May 31. Free. Artist’s talk 6 p.m., May 17 (RSVP jordan.howland@4culture.org to attend)

Alan Lau, Gilchun Koh, Jiyoung Chung: “Between and Within: A Tenuous Beauty”

Three artists, including Seattle poet/painter Alan Lau, explore “the changing climate of nature’s textures from chaotic to serene” in this small show at ArtXchange. South Korean artist Gilchun Koh’s striking etchings of birds — some of them shown, unnervingly, in flight with bandages wound around their heads — all come with an actual feather affixed to the paper, noting where and when it was collected. Within his chosen constraints, Koh finds a wealth of compositional variety and verve. Lau’s sumi-ink-and-mixed-media works on rice paper fuse the figurative with the abstract. In “as we walked through fields of Taiwan cabbage,” he uses Asian brush techniques to create something that looks like both a topographic map of hilly terrain and a gentle scene from an overgrown garden. Stars, stones and farmer’s market produce inspire Lau, too. Rhode Island-based Jiyoung Chung’s work is the most abstract. She uses traditional Korean Joomchi paper technique to create bold bas-relief effects. Her aptly named “Between and Within,” with its multiple self-contradicting layers, lends the show its title. —M.U.

If you go: "Between and Within: A Tenuous Beauty," ArtXchange, through May 26 (Free)