Think your music is radical? Now listen to Harry Partch 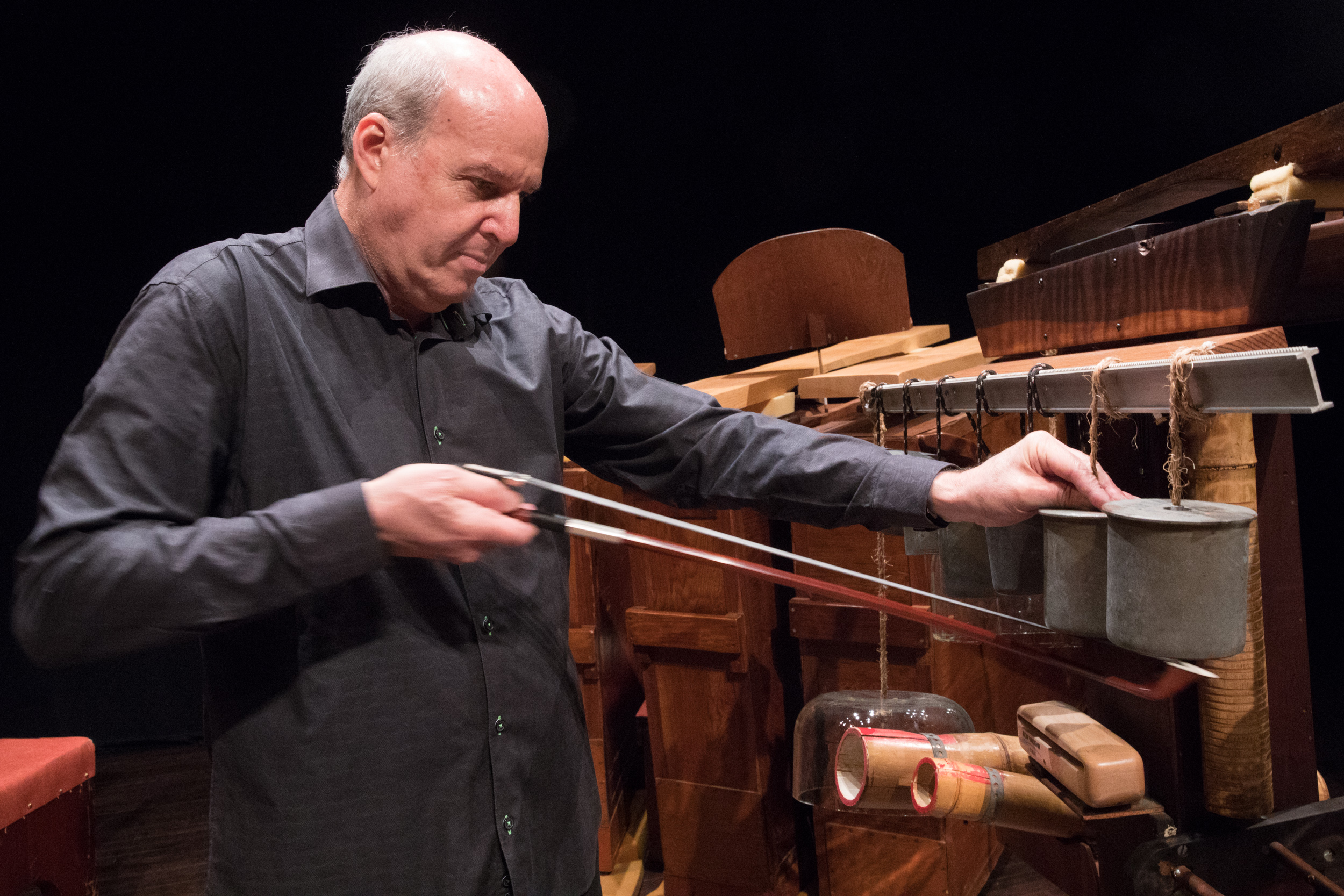 Richard Karpen, director of the UW School of Music, playing the “spoils of war,” a Harry Partch musical invention, at Meany Hall. Partch’s rarely seen instruments will be used in live performances during the Partch Festival this weekend. Photographed in Seattle, May 9, 2018. (Visuals by Matt M. McKnight/Crosscut; Video editing by Aileen Imperial/KCTS 9)

“It sounds like ancient music from a time that didn’t exist, from a past world that’s entirely made-up.” That’s University of Washington School of Music director Richard Karpen, describing the somewhat indescribable music of Harry Partch. The maverick American composer’s work — and collection of invented instruments resembling something out of Dr. Seuss — is the focus of UW’s Harry Partch Festival this weekend.

The hugely influential Partch (1901-1974) is heralded for his mid-century musical innovation, as one of the first Western composers to explore “microtonal music.” Instead of using the standard 12 intervals in each octave (like the chromatic scale), he developed music using 43 intervals per octaves — allowing for many more harmonic possibilities. The result is something that sounds closer to music made by archaic Asian instruments.

But instead of acquiring or replicating such instruments to create his music, Partch — a lifelong tinkerer and lover of theatrical productions — used found materials to invent and build his own instruments. And what instruments they are.

Arrayed across the stage at Meany Hall for rehearsals prior to the festival, the collection looks like a foreign planetary landscape in an original Star Trek episode. (Spock’s Vulcan lute would fit right in.) One resembles a human-sized wooden microscope. Another looks like a stringed pinball machine on blue plexiglass legs. Another appears to be a gnarled tree with grapefruit-sized seed pods. And then there’s the gargantuan marimba, surrounding its player like a chariot from Ben Hur. “With all the heavy music theory involved in Partch’s work,” Karpen says, “There’s whimsy too.”

UW’s Partch “Instrumentarium” curator Charles Corey says the full collection includes 50 instruments, “ranging from small hand instruments to some of the massive sculptures on stage.” During the festival, musicians will make use of 23. And while he acknowledges there are replicas out in the world, Corey says the difference is audible. “If you want to hear Partch’s music how it was meant to sound — on the original instruments he built himself — this is the only place.”

The three-day festival includes performances of Partch’s classic works, as well as eight world premieres, one of which was composed by UW’s Karpen — the Partch superfan largely responsible for bringing the instruments to Seattle.

“I have been listening to Harry Partch since I was a teenager,” Karpen says. “Around 1972, I played his LP The World of Harry Partch over and over. His music is deeply embedded my mind and body.” An experimental composer himself, Karpen lists Partch as one of his biggest musical influences, alongside Sergei Rachmaninoff and Led Zeppelin.

When presented with the opportunity to have the instruments housed at UW, Karpen jumped. Previously located at Montclair State University in New Jersey, the collection arrived in Seattle in 2015.

Karpen’s festival piece, “Ode,” uses 17 of the Partch instruments. It took him nine months to compose, and was written with input from experimental music supergroup The Six Tones, featuring Vietnamese musicians Ngô Trà My and Nguyễn Thanh Thủy, and Swedish guitarist Stefan Östersjö. The Six Tones and Karpen play a variety of instruments throughout the piece, from Partch’s regal Kithara to the bamboo marimba to a zither-inspired creation played by the two Vietnamese women at once.

“Ode” starts with a great jangling, as Karpen hits mallets against the upright Kithara strings and Nguyễn pounds her hands against oversized bass marimba slats. As it progresses, the piece moves through jarring, quiet, trippy, funny and pretty rockin’ sections (there’s that Zeppelin influence). Ngô accompanies the crychord with vocalizations that recall Yoko Ono’s musical experiments, altering scream-singing with moaning, yipping and hiccupping. Östersjö plays bent notes on an adapted guitar, which slide like a siren descending on a faraway hill.

At one point, Karpen compresses a foot-powered bellows (which Partch dubbed a blo-boy), pushing air through disembodied organ pipes to create a mournful, breathy sound like a train whistle. Karpen believes the instrument was an homage to Partch’s early years spent living a nomadic, “hobo” lifestyle.

The sounds are strange to the Western ear, but undeniably, humanly compelling — a fact borne out by the hundreds of people who flock to Seattle from far flung locales just to hear these instruments.

“People all around the world know about UW because of the Partch collection,” Karpen says. “We can’t take that for granted.” Noting that the instruments require proper storage and maintenance, he says so far he’s been cobbling together funding from the School of Music, but worries this may be the last Partch festival unless donors step up. “It’s just not sustainable,” he says.

But for the moment, any concern Karpen feels about the Partch collection’s future is ameliorated by the visible joy he experiences during rehearsal, hammering, strumming and plucking these innovative and endearingly odd instruments.