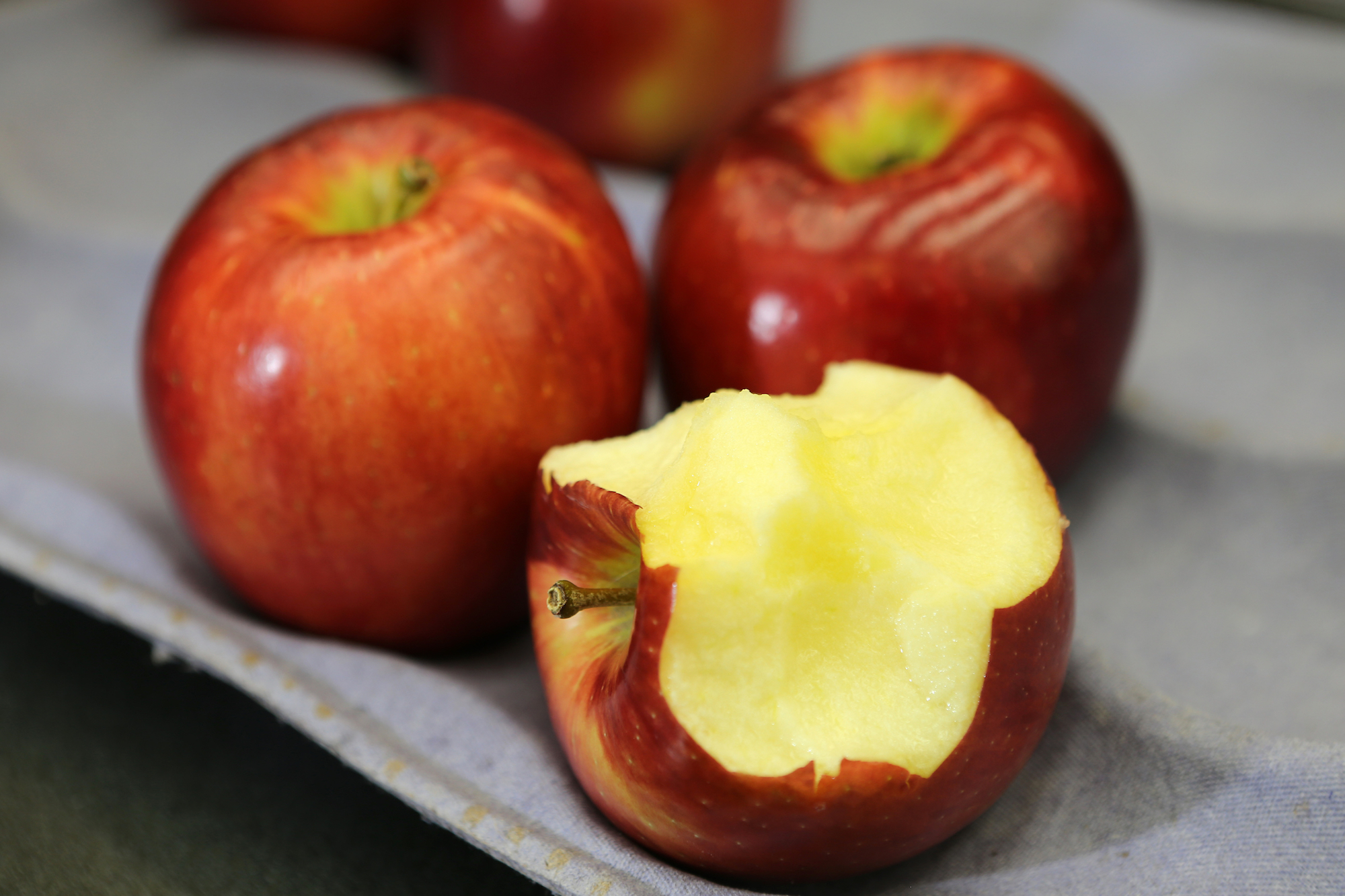 Cosmic Crisp apples (All photos by Karen Ducey for Crosscut)

Bruce Barritt, Ph.D., is running around the apple orchard with his camera snapping pictures. He resembles a kind of horticultural Pete Carroll, coach of the Seattle Seahawks. He’s energetic, articulate and has a bounce for a guy in his 70s.

It is spring planting season and what’s taking place here in the hills east of Wenatchee is the elaborate choreography of putting in a new orchard. Multiple tractors are going back and forth opening rows of soil while workers drop small, twig-like trees into the furrows. Other workers follow behind covering the rootstock and trimming each tree as it’s planted. Hundreds of trees are planted in minutes. Watering systems and trellises follow.

It’s not uncommon to have a camera when an important birth is taking place, and make no mistake, this planting season is part of an elaborate gestation of a new apple variety that is designed to change the industry and consumer tastes. Barritt, emeritus professor of apple breeding at Washington State University, is the proud papa.

He has been working on this new apple for more than 20 years — since the mid-1990s — and now his dream is literally coming to fruition. “My kids don’t like me to say this but these are like my kids,” he says gesturing at the trees.

The patented name of the new apple is WA 38, but you will know it as the Cosmic Crisp. It is part of a huge bet the Washington apple industry is making to create a new variety that will supplant many of the old familiars, like the iconic Red Delicious. The Northwest, led by Washington, provides about two-thirds of America’s fresh apples and also nearly 75 percent of all U.S. apples, including those used for juice. The state’s apples also sell around the world. With funding from state growers and led by Barritt, WSU researchers have invented a new variety that, they believe, will change the face of the industry and win enthusiasm among the public with a combination of taste, texture and usability.

Just over 600,000 Cosmic Crisp trees were in the ground in 2017, with some 7 million more being planted this year in 2018, and another 6 million next — a pace faster than expected. The new apple will be available to consumers in the fall of 2019 — it takes about two years for a new tree to bear fruit.

Barritt says growers will invest some $500 million planting the Cosmic Crisp over the next few years. Kathryn Grandy, director of marketing and operations for Proprietary Variety Management (PVM), a Yakima company tasked with introducing the apple to consumers, tells me it’s “the largest launch of a produce item” ever in the U.S.

According to PVM, Cosmic Crisp will begin to replace Galas, Fujis, Cameos, Braeburns and other varieties, including the Red and Golden Delicious.

Casey Corr, who just retired as managing editor of the industry publication Good Fruit Grower, says the apple has to be an instant success when it hits the supermarket. “It’s gotta be like the new iPhone,” Corr says.

The comparison seems apt. The Cosmic Crisp will reshape the apple market. It has been designed to be consumer, as well as grower friendly. It is a cross between two apple varieties, the popular Honeycrisp and the Enterprise. Its name derives from focus group folks who found that the little pores — lenticels — on the skin of the apple looked like “a starry sky” in the cosmos. It’s a good looking apple, important in markets but also important to those of us for whom the apple is a symbol. The apple is our state’s official fruit after all. 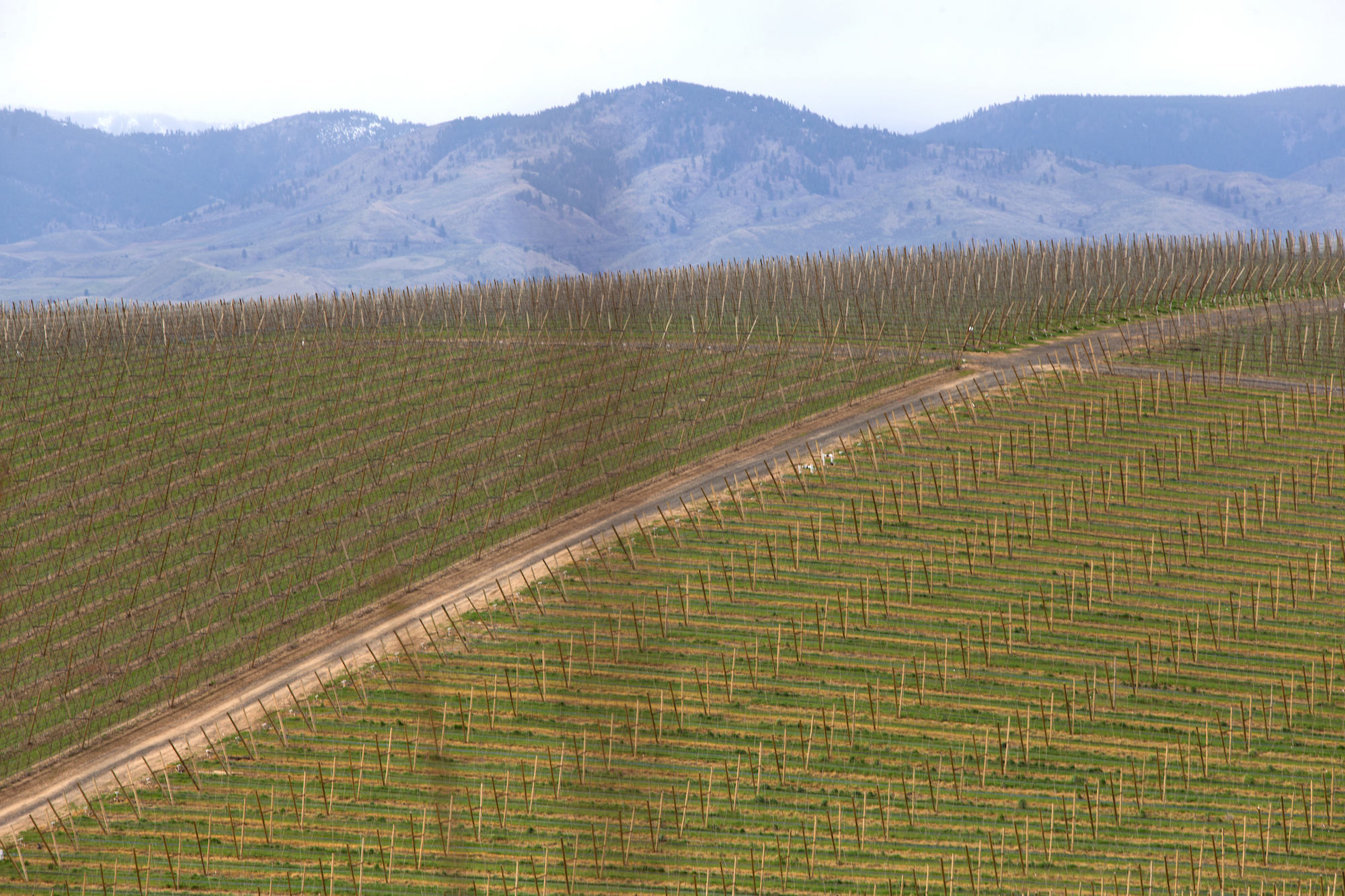 Rows of Cosmic Crisp nursery trees in the foreground dot the landscape in the McDougall & Sons Inc. orchards in Wenatchee.

Rows of Cosmic Crisp nursery trees in the foreground dot the landscape in the McDougall & Sons Inc. orchards in Wenatchee.

The Cosmic Crisp is big, mostly red and very juicy. Barritt says from the beginning the breeding program was designed with the consumer in mind. The apple market has changed over the years. Once staple varieties like Red and Golden Delicious were problematic — short shelf lives, bland flavors — and they’ve lost some popularity (sales peaked in 1994). Those varieties still sell and in some overseas markets like Japan, where tastes run to the familiar, the Red Delicious still is regarded as the ideal of what an apple should be, mostly due to its iconic shape and deep red color. Personally, though, I have never liked it. Other varieties have more flavor, better texture and are easier to grow. For those reasons some believe the Delicious is “obsolete.”

U.S. consumers like to be able to choose from more varieties these days. Many consumers, especially millennials, are willing to pay a premium for taste. That’s been the secret of Honeycrisp’s success — a good looking and tasting apple that commands a higher price. Part of the reasons for that cost: They are hard to grow and bruise easily.

The Cosmic Crisp has a number of advantages. It is slow to turn brown when cut. I had half of one in the car for six hours and it hadn’t even started to turn brown when I got it home. It keeps longer after harvest. Picked in September, the Cosmic Crisp in cold storage can last a year, extending its lifespan and reducing waste. It’s a 365-day-a-year apple designed to thrive in Eastern Washington’s apple friendly soils and climate, unlike varieties brought from overseas or the East Coast.

Barritt says that while benefits for growers are important, it’s taste that will make or break the variety. To that end, I visited WSU’s Tree Fruit Research and Extension Center in Wenatchee where I had a chance to discuss the Cosmic Crisp with Barritt and his successor overseeing research, Kate Evans, Ph.D.

We went down into a basement lab where vials filled with fluid from various Cosmic Crisps was being tested for acidity, which “provides the character of the apple,” says Barritt. It plays a key role in how any apple tastes, and learning to get the proper balance under differing growing conditions is important. Evans continues to conduct research on test trees in order to compile a grower’s manual for how to produce the optimum Cosmic Crisps.

The researchers take a batch of Cosmic Crisp apples out of the box. Barritt and Evans give some instruction on how to taste an apple. “Taste,” it turns out, is not just on the tongue. How does an apple sound when you bite into it? Does it crunch? Does the bite snap off in your mouth? What’s the texture like — smooth or mealy? Is the skin too thick? Is it juicy or dry? Taste involves all the sense before you even get to sweet or sour, the blend of flavors that make up an apple.

The WA 38 designation means it was the WSU team’s 38th attempt to get a new variety. Coming up with the perfect apple takes time. I was fully prepared to be disappointed — the industry hype and catering to mass tastes made me a little suspicious. While it’s not a GMO apple like the Arctic, you’re still talking about something created by scientists and commercial growers who are planting cloned trees.

But the Cosmic Crisp ticked every box: good looking, with a nice crunch and powerful snap, a beautiful sweet-tart balance, tons of juice trickling down the chin. I wasn’t overwhelmed by, say, hints of blueberry or a floral nose — the kinds of complexities wine tasters go on about. But it was one of the best apples I’ve ever eaten. In fact, my sample was the essence of apple.

People will continue to have their brand loyalties — I have talked to colleagues who’ve tasted the Cosmic Crisp and swear they will not give up their Fujis or Granny Smiths, but they are in the minority. WSU’s Evans is a tad nervous. The apple represents “a lot of trees, a lot of fruit for a new apple variety.” Growers are a little concerned with flooding the market as so many new Crisp orchards come on line. Will there be a glut? Will consumers embrace the new breed? 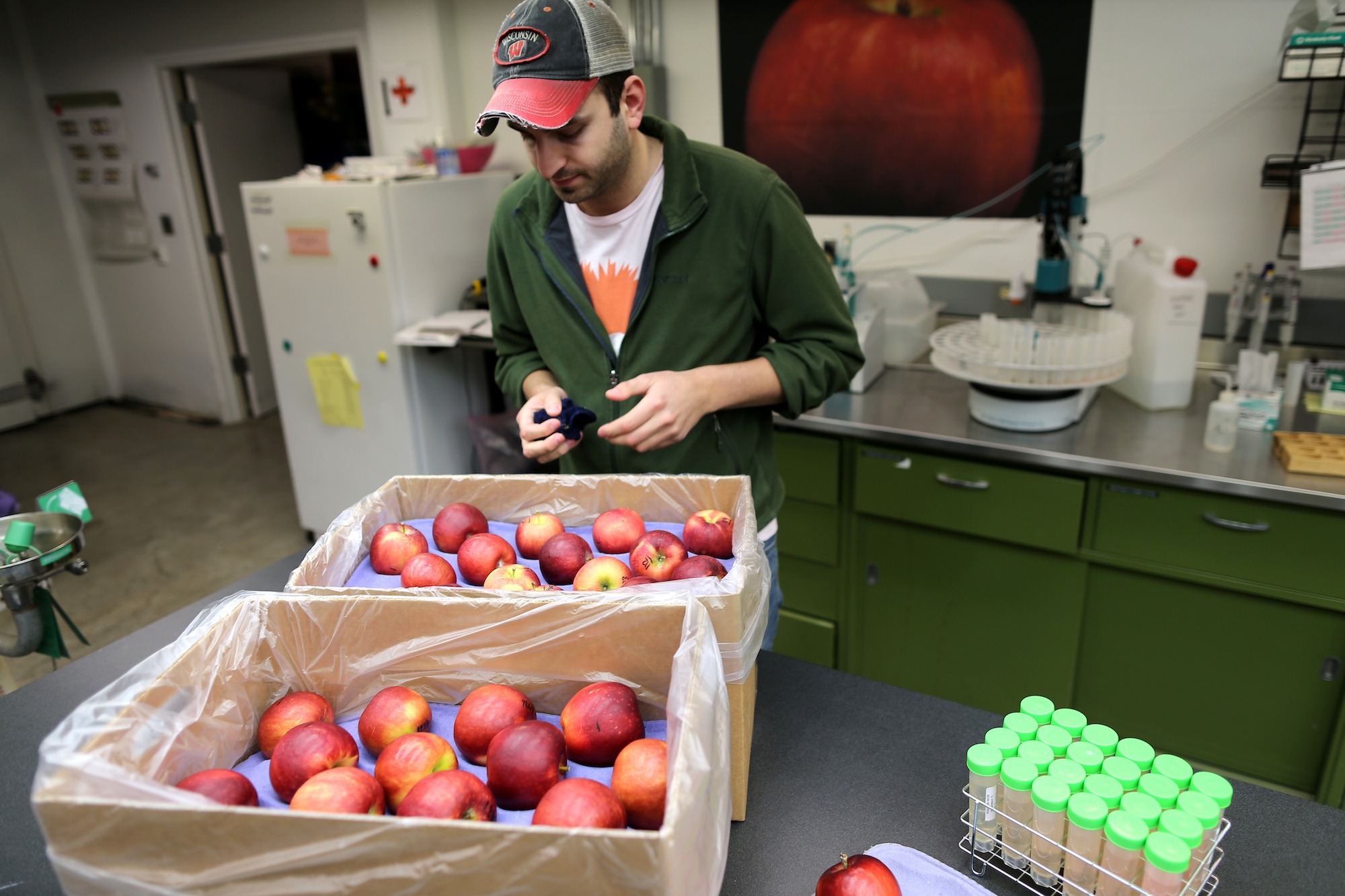 The Washington apple industry has come together on marketing and backing the Cosmic Crisp. From a competitive business standpoint, they’ll have a 10-year head start on other growers. WSU owns the intellectual property rights to WA 38 and Washington growers and taxpayers funded much of the research. State growers will have a 10-year exclusive to license and grow the apples in North America. WSU will seek patents in other countries, in the expectation that the variety will eventually spread. In other words, this apple is a unique, proprietary brand. If it catches on, it will be a boon for its home state.

The launch is not without a hitch, however. WSU and one of its partners, Phytelligence, a company founded by another WSU researcher that has a system for speeding up crop production, are involved in court battle over the rights to propagate Cosmic Crisps. The dispute is currently in federal court. Phytelligence says it wants to speed up the propagation process; WSU maintains the company violated its contract with the university and its intellectual property rights. The dispute doesn’t seem to be holding up the apple’s debut, however.

Barritt, who could not comment on the suit, is still feeling that new parent glow, and says he has little fear about the debut. He believes they have covered their research bases. The growers know what they’re doing and have deep experience adapting to market and growing conditions. The commercial apple business in Washington dates back to the 1880s; the first orchard was planted by the Hudson Bay Company in the 1820s, and one of those trees still lives and produces fruit — a fitting symbol of the industry’s durability.

Looking out over a vast orchard of his “children,” the professor says he feels the pride of any inventor about to see his creation go to market. “My employer,” he says, “was the people of the state of Washington.” He believes his invention will be rewarding for the people of the state. “I’m not anxious,” Barritt says.

Standing in the Wenatchee orchard he’s excited. Looking at the newly planted hills covered with thousands of Cosmic Crisp trees he says, “I see nothing on the horizon that will prevent its success.” 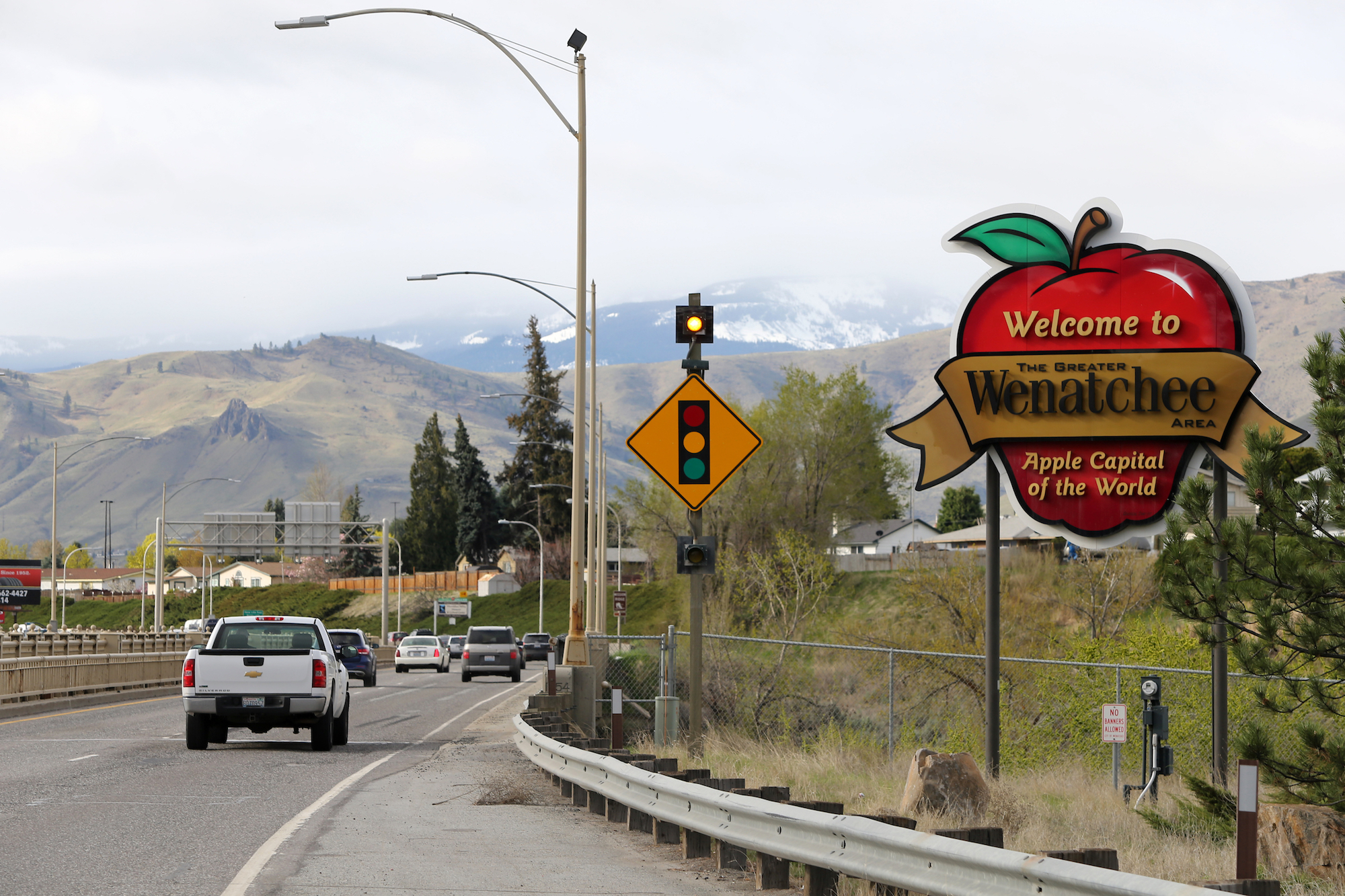