White Seattle needs a reality check on the city’s growth 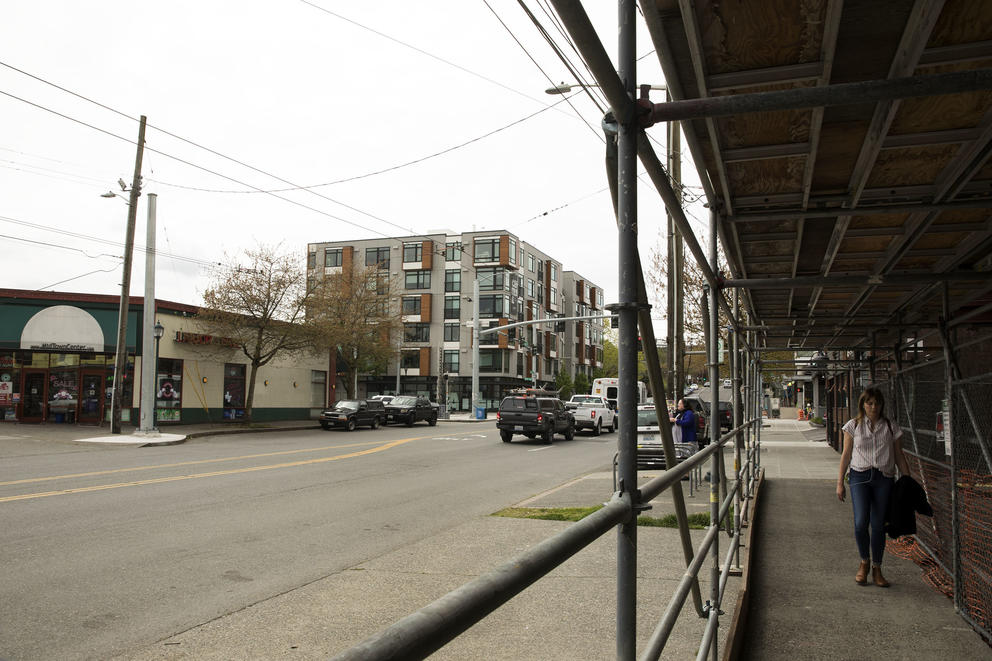 A street scene near the corner of 23rd Avenue & East Union Street in Seattle, April 30, 2018. It's part of the Central District, where gentrification has become an increasingly serious issue in recent years. (Photo by Matt M. McKnight/Crosscut)

Seattle has been a pressure-cooker of urban growth, and the boil has been building. Push-back against up-zoning in single-family and largely White neighborhoods has been intense — and well chronicled. So intense that even an urbanism cheerleader like City Councilmember Mike O’Brien was recently quoted by Bloomberg, saying “I think it’s actually a question we probably should be asking: Can cities grow too fast?”

While White Seattle is frustrated, communities of color have taken the brunt of change first, hardest and longest.

Their frustration, which has been less recounted by the media, was a main topic of a recent panel discussion at the Museum of History and Industry entitled “Resisting Displacement,” with a focus on change in South Seattle, particularly the Central District, Beacon Hill and the International District — a kind of gentrification trifecta. These are people and communities who have been fighting for survival in the city long before Amazon came along.

Panel moderator Inye Wokoma, an artist/photographer/filmmaker with longstanding roots in the Central District, is resisting gentrification there. The push of African American communities out of the CD is part of an ongoing story of displacement and disruption, he says.

He sees displacement as part of a colonialist legacy, part of herding minorities via racial redlining into designated areas, part of damaging public projects targeting these communities (urban renewal policies and related building highways, like I-5 and I-90). Yet these resilient enclaves, often stigmatized as “undesirable,” came to build rich communities.

“Black Seattle was very much a network of families. You knew them from their family name. There’s all these different ways you could be running into somebody on the street and you know there’s a half of degree of separation,” Wokoma told writer Naomi Ishisaka in an interview for a recent Crosscut/Seattle Magazine article. It wasn’t perfect, but it was home, culturally rich and with deep personal connection.

K. Wyking Garrett, president of the Africatown Community Land Trust which is acquiring and preserving property in the heart of the CD, echoed that sentiment. Garrett grew up with Wokoma in the CD and told the museum audience of the sense of community that has been lost since their childhood.

“I grew up in a village,” he says, one of connected backyards for exploring and traveling, fruit trees and ripe blackberries, watched over by village adults on every street.

The Trust is trying to preserve land so that the Black community in the CD can thrive amid the changes. His family has contributed much already, having played a key part in the occupation that resulted in the saving of the old Colman School, which is now the Northwest African American Museum. The school was saved despite the old state highway department’s plan to build a huge trench freeway and interchange there.

No community wants to be a museum culture — every community wants the rest of Seattle to know and respect that they have a place outside museums and historical accounts. No community has struggled more with that than the Duwamish, Chief Seattle’s people. In the tragic story of displacement, the treatment of the Duwamish is epic and shameful.

Chief Seattle invited Whites here in the hopes of creating a blended urban culture, prosperous from the mix of settlers and Indians. But when Whites arrived, the chief was marginalized early, Native peoples were banned from living in Seattle, their longhouses and habitations burned. The Duwamish never received a reservation nor are they recognized by the U.S. government; and yet the Chief is our official city symbol.

The panel included Jolene Haas, daughter of Duwamish tribal leader Cecile Hansen, a descendant of Chief Seattle. Haas’ message: “We’re still here.” Native American Seattle is not a relic of the past. Even before the recent population boom, figures from the Census Bureau generally showed 35,000-plus Native Americans and Alaskan Natives. A longhouse, situated on the river named for the tribe, is a small foothold for about 600 members of the Duwamish. Their history of abuse and their fight to remain visible and acknowledged, not simply in history but in contemporary Seattle, is ongoing. “There’s room for everyone — they don’t have to be displaced,” Haas says. And this is an ethic for development, for growth: it must be for everyone, the old and the new.

As for her people, “we go on, we persevere,” she says. Her people have been resilient, as others will have to be. They’re a role model of tragedy and survival.

If the Duwamish are not of the past, then neither is the "violent disruption" and upheaval of communities by gentrification, says Hodan Hassan of the South Seattle environmental justice group Got Green. People need affordable homes, living wage jobs, access to healthy food, and community to feel like they belong, she says.

While Whites might tend to see displacement as an Amazon-driven phenomenon, many in the South End see the current growth boom as a continuation of ongoing marginalization and community destruction as the area is transformed. It is dominated not by a big company or two but by public policy and financially driven agendas.

One ground-zero for change is the Chinatown-International District. Marlon Dylan Herrera of the CID Coalition, a group fighting displacement in the area under the slogan of “Humbow Not Hotels,” thinks the Chinatown-International District has taken more than its fair share of big-project disruption. Those range from the King Street transit hub to the Stadium District and Kingdome to the new threat of luxury condos. “Who bears the benefits and who bears the burdens?” he asks.

“What,” he also asks provocatively, “have Blue Ridge or West Seattle done for the greater good?” White Seattle’s bastions have been historically protected, he suggests.

The Chinatown-International District’s population is low income, yet wealthy and White people are coming with projects like the Koda Condos at Fifth Avenue S. and S. Main Street, a project he has spoken out against. In a post published on Medium, he wrote, “Why should the CID experience unprecedented gentrification when the whitest neighborhoods have de facto moratoriums in the form of single-family zoning?” Herrera  has also written that while he considers himself an urbanist, supportive, for example, of upzoning the U-District, “I understand that ever since Luther Collins and Arthur Denny began occupying Duwamish land, Seattle has been a city of white people, for white people, by white people.” He has said too that he opposes luxury condos and hotels in the CID “in the name of racial justice.”

The issue of displacement should serve as a wake-up call to White Seattle to look beyond its backyards. Repeatedly on the panel it was mentioned that there is a disconnect between growth boosters and supposed progressive values. How can progressives let what is happening continue? It isn’t just a matter of better zoning but of repairing — rather than continuing — the practices that have damaged so many people and continue in a contemporary guise.

Wyking Garrett says that in his neighborhood today, he sees a lot of “Black Lives Matter” signs, “but less Black lives in the community.” Seattle has few Trump supporters, he continues, but when they look out at the city from his part of town, “we see a world that Trump is advocating for.”

That should give Seattle progressives a reason to do some soul-searching.