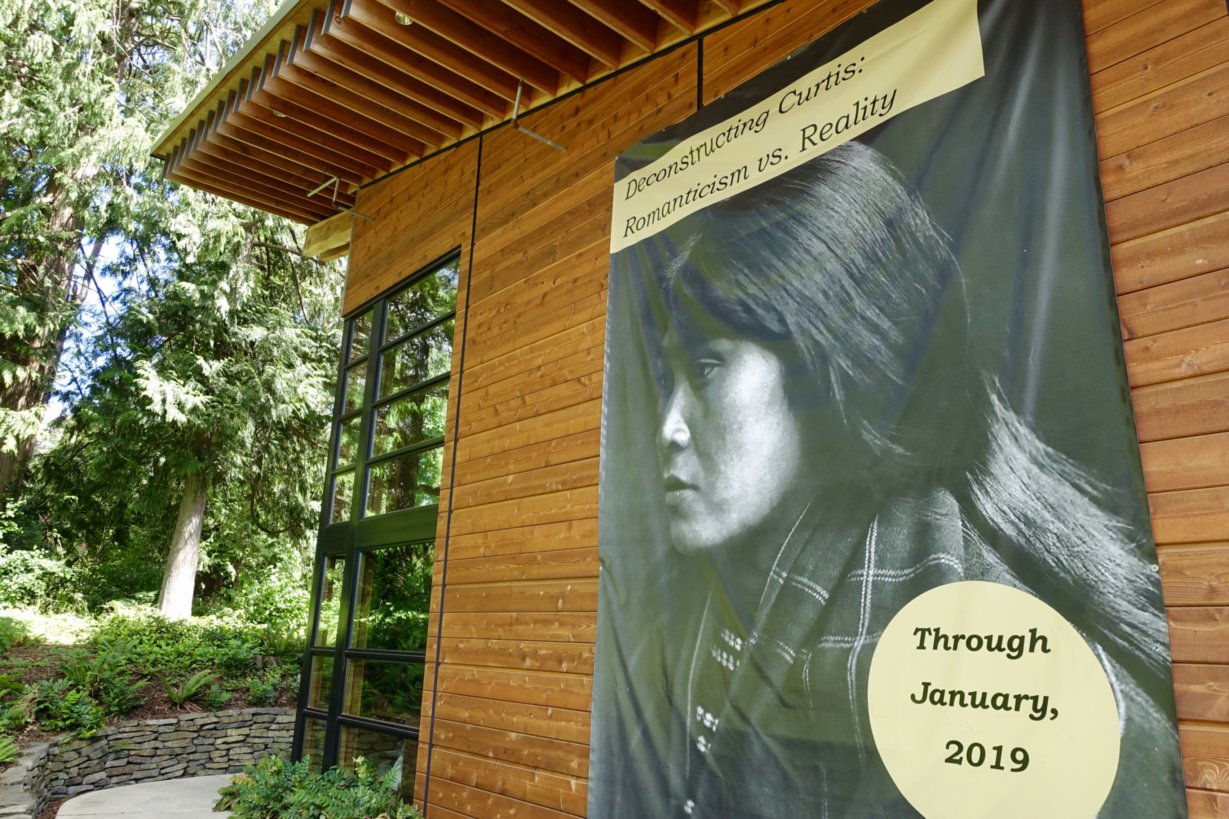 The Suquamish Museum on the Kitsap Peninsula is home to one of two local exhibits (the other at Seattle Art Museum) showcasing the life and work of controversial photographer Edward Curtis. (Photo by Daniel Spils)

Two new exhibits shed light on the life and work of prolific photographer Edward Curtis, whose portraits of Native Americans at the turn of the century have proven both iconic and controversial (read Crosscut’s full story here). At Seattle Art Museum, Double Exposure features more than 150 Curtis photos — many of local tribes, as Curtis had a studio in Seattle — accompanied by contemporary art by Native American artists Tracy Rector, Marianne Nicolson and Will Wilson. At Suquamish Museum, Deconstructing Curtis: Romanticism vs. Reality pairs Curtis photos he painstakingly staged in the past with other photos of tribal members taken at the same time (in which subjects are wearing standard Victorian styles and engaging in business pursuits). Both exhibits appreciate the artistry and aim of Curtis’s work and at the same time question his methods (often incorporating props, wigs and regalia from other tribes in the photos to accentuate the “noble savage” imagery). Both offer captivating views of this complex character.  —B.D.

Roxane Gay: Not that Bad: Dispatches from Rape Culture

Influential author of An Untamed State, Bad Feminist, and, most recently, Hunger: A Memoir of (My) Body, Roxane Gay never fails to strike a nerve, whether regarding feminism, fatness or social justice issues. Her newest book is an anthology of essays from a mix of writers (including Ally Sheedy and Gabrielle Union) about the enraging and ever-present issue of violence against women and the dismissive treatment thereof. As a speaker, Gay is both fiery and very funny, so don’t miss this chance to see her. —B.D.

Sadly, after five years nestled in Pioneer Square, sundry shop, lovely cocktail bar and occasional event space E. Smith Mercantile, will be closing its doors. Stop by this Saturday for a special rummage sale, which will include the last of E. Smith Mercantile’s goods, along with finds from local shops Velouria, Clementine’s and Swan Dive. I highly recommend pairing your browsing with one of their truly excellent cocktails, hopefully not a first but most likely a last. There will also be house-made ice cream sandwiches and plenty of the feel-good charm and friendliness that made E. Smith a bright star in the unique Pioneer Square community. —N.C.

For the last week or so, Greenpeace ship Arctic Sunrise has been docked in Lake Union Park (near MOHAI and the Center for Wooden Boats). The striking green ship, whose rounded, keel-less hull makes it an icebreaker, travels the world — from the Arctic to the Antarctic to the Congo to Amazon — with the express purposes of “documenting offshore oil pollution, thwarting commercial whaling and bearing witness to the impacts of climate change.” The goal of the 2018 West Coast Ship Tour is to draw attention to a potential expansion of the Trans Mountain Oil Pipeline, called the Standing Rock of the West, right here in Washington and Vancouver, B.C. Learn about the Arctic Sunrise’s conservation efforts and adventures from its crew of activists, which includes scientists and photographers, on very special, 30-minute free public tours (all weekend!) aboard this operational vessel. —N.C.

Things have gotten unruly in the world of Issaquah-based surrealist painter Tyson Grumm. In “15 Minutes of Fame (Adding Fuel to the Fire),” a pyromaniac panda holds a lit match while a nearby car goes up in flames. In “It’s Not Rocket Science,” a rhinoceros exits a carnival-colorful spaceship that it couldn’t possibly have fit into. And in “Circle of Life” a prancing ostrich in pearls treads an oversized roulette wheel while navigational charts behind it and below it pleasurably befuddle the viewer’s sense of perspective. Grumm’s madly inventive acrylic paintings on panel aren’t overtly political, but they do sarcastically reflect the nutty times we live in. This is fun, obsessive, highly accomplished work. —M.U.

If you go: Tyson Grumm, Patricia Rovzar Gallery through June 30

Aaron Copland (1900-1990) is best known for his ballet music, most famously his score for Martha Graham’s “Appalachian Spring,” with its homages to American hymns and folk music. But he also had a “pure composition” side, as is the case with his Symphony No. 3. This four-movement work is a chance to hear Copland explore musical ideas springing entirely from his own imagination. The results can be dreamily pastoral, grandly stern, frothily playful, searchingly cosmic, or vivaciously muscular. They have an ebb and flow that feels quintessentially American – especially in the fourth movement where Copland incorporated his hallmark piece “Fanfare for the Common Man” at the opening. Also on the program: The Symphony’s Leonard Bernstein centenary celebrations continue with his short, punchy “Overture to Candide,” and cellist Johannes Moser performs two works by film composer John Williams, Elegy for Solo Cello and Orchestra and excerpts from his score for “Memoirs of a Geisha.”  —M.U.

Peer closely at the photo collages of Dorothy Anderson Wasserman and fall into a visual universe of endless complexity. Wasserman expands on David Hockney’s photo-collage experiments of the 1980s, producing heady results whether she’s evoking the entire history of Seattle in “Still Point @ First & Marion” (her latest work), contemplating the music of Mozart in “David in C Minor,” or evoking the whole cycle of existence (birth, life, death) in her playful “Inside/Out” triptych. The collages are composed entirely from photographs that Wasserman took herself. Things get particularly tricky when they’re photographs of sculptures she made, including one in “Still Point” of a sculpture that’s partly made from photographs. (The photographs of trees in “Still Point,” representing Seattle’s primeval forests before white settlement, are actually photographs of bonsai.) Wasserman moved to Seattle from the East Coast last summer and we look forward to seeing more from her. This small show is a dazzler. —M.U.

If you go: Dorothy Anderson Wasserman, Gallery 110, through June 30

The co-authors of Russian Roulette: The Inside Story of Putin’s War on America and the Election of Donald Trump have been some of the most insightful news-breakers and commentators on the bizarre new world (dictators are good! Canada is bad!) we inhabit. Here’s a chance to hear them hold forth on their investigations and the latest twists in the Trump saga.  —M.U.

The Japanese-born artist (who’s been based in Omaha since 1986) creates quite the contemplative atmosphere with this show of more than two dozen pieces. Kaneko’s glazed-ceramic “dangos” (grounded forms) dominate the exhibit like enormous lozenges stood on end (one is over seven feet tall). With abstract blue-on-white color schemes, they have a cosmic feel to them. Kaneko’s ceramic wall slabs do something similar, hinting at constellations or small window-glimpses of endless night skies. Elsewhere, in both his sculptures and his Sumi-ink-and-oil-stick drawings, Kaneko plays with primary and pastel colors. These works have a presence that’s as arresting as it is elusive. —M.U.

If you go: Jun Kaneko, Traver Gallery through June 30

Marching in Gucci: Memoirs of a Well-Dressed AIDS Activist

Chad Goller-Sojourner moved to New York City in 1992 — at the height of the AIDS crisis.  He ended up burying friends and lovers on a near-weekly basis. The fact that he — Black and gay — is still alive is not lost on him. Now the 47-year-old unveils a semi-autobiographical solo show about the AIDS crisis through the voices of African Americans, sex workers, drug users, the poor and the un and underinsured. “I’m honored to be able to tell that story,” Goller-Sojourner says. If this show is anything like his two previous solo works expect it to be funny, poignant and the kind of show you keep talking about long after.