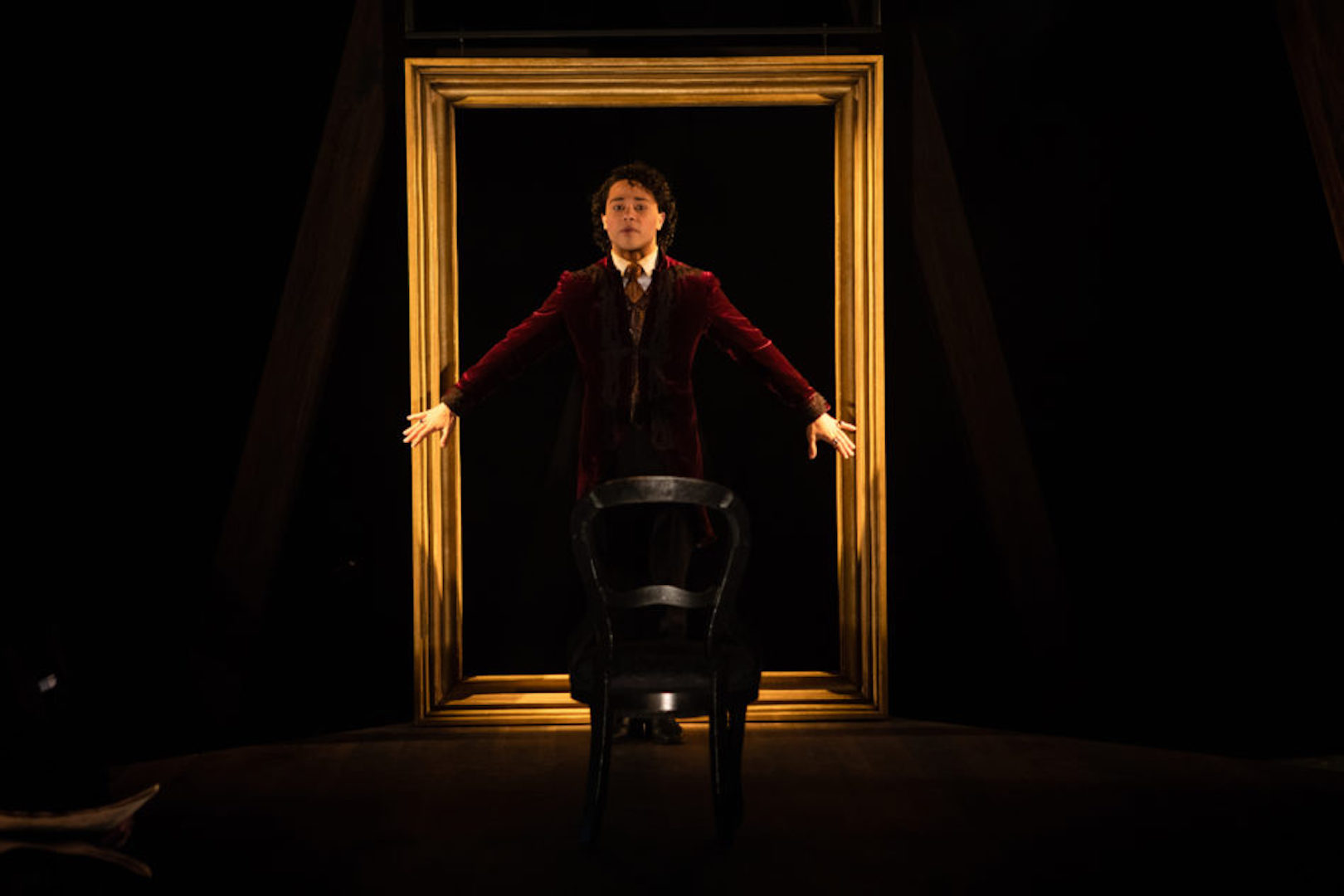 Chip Sherman as Dorian Gray in Book-It Theatre's production of The Picture of Dorian Gray. (Photo by John Ulman)

A handsome young man gazes at a flattering portrait of himself created by an admirer and whispers a wish to stay eternally youthful, forever beautiful.

This much-admired Adonis is the title character in Oscar Wilde’s only novel, the exceedingly witty and sensuous The Picture of Dorian Gray. But Dorian might as well be a Narcissus of today, clinging to his mirror image, willing to go to any measures to stop the clock in his early 20s.

Dorian’s unfortunate fixation is now on display in a new Book-It Repertory Theatre dramatization (running through July 1) of Wilde’s original version of the novel, first published in a London magazine in 1890. The show, like the book, is set among the upper crust in Edwardian England. But the worship of comely youth, and the fantasy that it could go on forever, is arguably more pervasive (and almost as perverse) in our own time.

Who knows what kind of facial moisturizer Dorian used? And one doubts he spent every spare hour working his biceps and triceps at the gym. All he had to do was to agree to that portrait, which in this elegant horror trope grew old and corrupt as his soul became uglier.

Today, staving off Father Time would be more a matter of buying into a mindset (and an economy) that has us chasing illusory rewards that may have little to do, ultimately, with happiness.

So suggests Barbara Ehrenreich in her new book, Natural Causes: An Epidemic of Wellness, the Certainty of Dying, and Killing Ourselves to Live Longer. Ehrenreich, a self-described “mythbuster,” wants us all to get real about the biological inevitability of aging and dying, and stop trying to keep it at bay — not by taking generally good care of ourselves, but by buying into dubious longevity aids, like extreme diets, an ever-increasing array of touted supplements and punishing exercise regimes.

Most of us probably wouldn’t go as far as Ehrenreich does in embracing a future date with the Grim Reaper. (At 76, she refuses to get any more annual medical exams and routine cancer screenings because she’s “old enough to die.”) But it’s kind of refreshing to encounter a healthy person who calmly accepts the notion of her own demise, without believing in a heaven that will reward her for good behavior.

A booming ageless-beauty industry, meanwhile, caters to women, but also some men, who will seemingly pay just about any price to become and remain whatever the prevailing idea of youthful and pretty is. Cosmetic surgery practitioners now rake in some $16 billion a year in this country.

Who can begrudge anyone a nip here, a tuck there? What is more insidious are the higher and higher standards of the eternal body beautiful.

Those standards can veer into the territory of the absurd. Consider Amy Schumer’s recent movie, I Feel Pretty. Schumer plays a thirty-ish woman who says, “Let’s be honest for a minute. No matter how many times we hear, ‘It’s only the inside that matters,’ women know deep down it’s what on the outside that the whole world judges.”

Suffering from that acute 21st-century disease of low self-esteem, Schumer’s character heads for the gym only to bonk her head in a spinning accident. And when she comes to, she looks no different than before — but suddenly considers herself a beauty. Without the constant self-abuse, she radiates such a glow of confidence that she finds the moxie to become — wonder of wonders — a successful cosmetics saleswoman.

In Dorian Gray, what Wilde was after was more of a metaphysical, Faustian study of what happens when the outside looks grand, but the interior is corrupted.  Dorian shames to death someone he loves, and murders someone else who worships him. His egocentricity is matched by his self-serving decadence; his art is all artifice.

He’s an extreme case, but Victor Pappas, director of Book-It’s production, muses that “the story is very much about the same obsessions we have in our culture now. He makes a wish, and he’s kind of cursed when his wish comes true.”

Says veteran screenwriter Judd Parkin, who adapted Wilde’s book for the stage, “I work in L.A., a place that’s totally obsessed with appearance. The story is timeless because everyone is looking for that fountain of youth.”

Beware: it may not be what you bargained for.