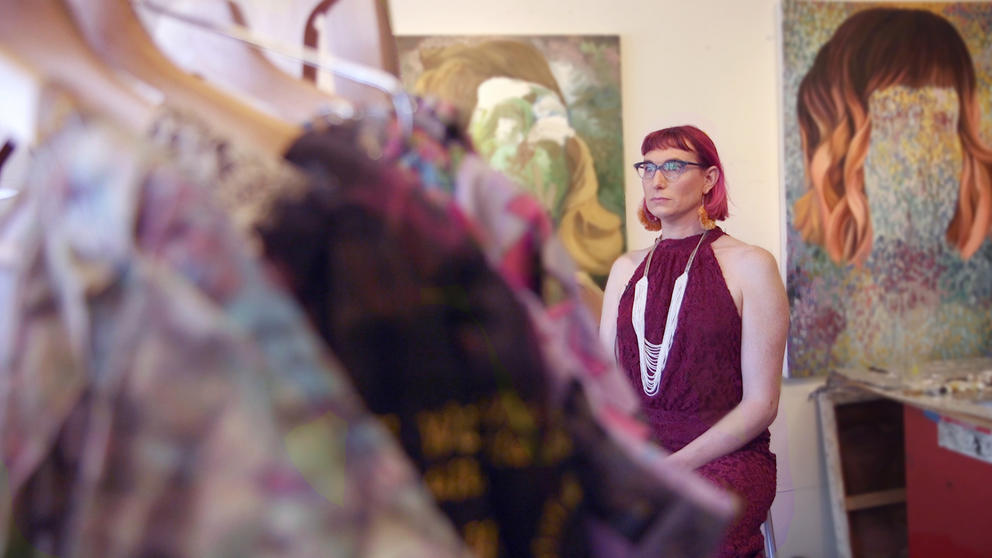 Seattle artist Jono Vaughan in her studio with dresses created for Project 42, currently on view at Seattle Art Museum. (Photo by Aileen Imperial/KCTS9)

The dance solo, which took place at Seattle Art Museum, was one of several made by different collaborators in conjunction with a long term art series called Project 42. A labor of love and loss by Seattle-based trans artist Jono Vaughan, Project 42 memorializes 42 murdered transgender individuals by way of exquisite garments handcrafted for each person. (The project is ongoing; 14 garments have been created since 2012.)

Late last year, Vaughan won SAM’s prestigious Betty Bowen Award for her work, and the museum is displaying several of the garments through Aug. 5.

Vaughan — direct, dryly funny and a little shy — explains her process with a hint of a British accent from her childhood in London. “Every shot begins with a Google Earth screenshot of the location where the murder took place,” she says. Noting that the medical term for transgender is “gender dysphoria,” she says, “I guess the way I’ve always thought of it is that things seem a bit dis-attached. So the idea of a satellite seemed very interesting to me.”

When possible, Vaughan, who has a background in painting and printmaking, also uses Google Street View to “drive by” the place where the violence occurred. She then abstracts the images into a pattern, sometimes adding colors from the clothing the victim was wearing or symbolic imagery. The design is ink-jet printed onto fabric, and the painstaking work — involving several collaborators who help stitch, embroider, screen print, hand paint — of constructing the garment begins.

In donning the vibrant and swirling purple, orange and yellow dress dedicated to Deja Jones, Ford committed several social transgressions at once: Walking through a SAM gallery in her undergarments, taking a piece of art off the wall, slipping it over her head and dancing down the hall to Mary J. Blige’s “No More Drama.” Not to mention the essential transgression of being trans, of not fitting into society’s tidy gender boxes.

“I wanted to give Deja the proper memorial she should’ve been given … versus just being forgotten about,” Ford says. At the beginning of the dance, she delicately pointed to four spots on her torso, representing the gunshots, and flinched as each finger landed. “I started there because we have to face the facts,” she says.

The facts are sobering. While getting an accurate count of trans murders is difficult, since many of the crimes are reported with gender inaccuracies, the Human Rights Campaign and Trans People of Color Coalition assert that at least 102 transgender people were killed in the U.S. between 2012 and 2017, with last year as the deadliest on record (at least 28 trans people were killed). This year, there have been 12 transgender murders reported so far. Those killed are overwhelmingly trans people of color, and most are trans women.

By doing a bit of unofficial third-party research based on the scant information about these deaths, Vaughan estimated that the median lifespan of a murdered trans individual is 42 years. “I took all the ages I found and averaged them out,” she says. “And it seemed very personally symbolic because I’ve been edging closer to that number myself.” She turns 42 next year.

Vaughan chose the 42 people to memorialize in a simple manner — she visited a website with a list of those killed and selected the first 42 names she saw. While her original idea was to make abstract paintings based on the murder locations, she says, “I finished a couple and I was like, ‘Well, they don’t do much.’”

Despite having no previous sewing skills, she shifted her medium to garments and it clicked. “For trans people, garments are a very important part of identity,” she says. (She has also made extensive artwork regarding the related topic of hairstyles.) “Having access to garments and getting to wear what you want and presenting yourself in the way you believe that you should be presented is a big component of my existence as a trans person.”

Vaughan took initial inspiration from New York-based artist Lesley Dill, who is known for creating elaborate dresses out of paper and other unorthodox “fabrics” and adorning them with poems and text. Key for Vaughan is the idea that these garments are dedications, that they take time and effort to create. “Labor in my work is very important,” she says. “The labor that is put into the works is part of the memorialization. It’s the time that I spend thinking about that person and their story, and about how I’m hosting their spirit while I’m making their garment.”

In this way, Project 42 evokes the 1980s AIDS Memorial Quilt project — the massive, hand-crafted effort to memorialize a then-misunderstood community that was dying in unprecedented numbers. Just as countless people bent over quilt squares for hours to honor lost gay sons, brothers and friends, Vaughan and her collaborators toil together in her industrial Sodo studio, pushing needles through fabric to create something that brings a lost life alive.

The performances are another way of honoring the dead. While some have occurred in galleries, others have taken place abroad, including in Italy and Vietnam. “A big part of the project initially was the idea of travel and opportunities,” she says. “When someone’s life is cut short, all those opportunities have been stolen from them.” With normal human desires denied — such as seeing another part of the world — Vaughan says the garments are a way of “returning the humanity to that person.”

In Ford’s experience, the performance not only brought Deja Jones to life, it gave a young dancer something to hold on to. “It was really a spiritual moment,” she says. “Almost as if, ‘She’s here!’ She was in the dress, and she was helping me get through. It felt really, really good.”

The public is invited to participate in Project 42 by attending a fabric-flower making workshop at SAM, June 7, 5-7 p.m. Flowers will be added to the train of one of the memorial garments on display.