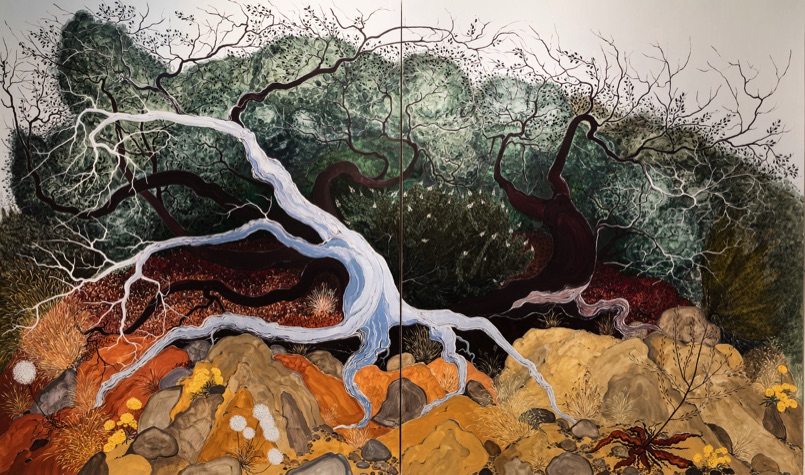 “Serpentine” by Adrianne Smits. Her show is currently on view at the Bryan Ohno Gallery.

I’m not generally one to mourn the death of celebrities but last week’s news of the passing of Koko the gorilla — who embodied the potential for primate depth and connection — really hit me. Born Hanabi-Ko (Japanese for “Fireworks Child”) on July 4, 1971, at the San Francisco Zoo, Koko was chosen to take part in what would became the longest-running primate study in American history to date. Penny Patterson, Koko’s longtime caretaker and trainer, began teaching Koko American Sign Language, quickly exploding everyone’s expectations and earning Koko the status of a celebrity, who eventually was a guest on Mr. Roger’s Neighborhood and tickled Robin Williams. At the time of her death, at age 46 in her sleep, Koko understood over 2,000 American English words and could use over 1,000 signs. But as with any teacher-student relationship, the real joy is in what Koko taught all of the humans who encountered her, and by extension, all of us. Mourn the loss of this Western Lowland Gorilla at this special one-night showing of the 1978 documentary “Koko: A Talking Gorilla.”

“Luck is everything,” said Alfred Hitchcock. “My good luck in life was be a really frightened person. I’m fortunate to be a coward, to have a low threshold of fear, because a hero couldn’t make a good suspense film.” This fear helped spur 53 feature films, which capture and connect to our fear on such a basal level that Hitchcock’s catalogue is still terrifying and instructive decades later. This Sunday, come to Greenwood’s Naked City Taphouse for a special viewing and discussion of Hitchcock’s 1963 film The Birds. Co-sponsored by Scarecrow Video and Crypticon Seattle (the area’s annual festival for fans of the macabre), during the regular event SHRIEK!, creators and instructors Evan J. Peterson and Heather Marie Bartels show and lead a discussion of horror films. The goal of the class series, which has been going for a few years, is to provide an accessible setting for people “to learn about film and women's studies and to inspire more diverse filmmakers to get involved as creators in the genre.” The docket for later in 2018 includes: “Under the Shadow” and “Pet Sematary.”

To call Adrianne Smits a “landscape painter” doesn’t quite cover it. (For starters, she has a Ph.D. in ecology.) Her focus in Serpentine is on patches of wilderness where you can’t see too far, where twisting tree roots become oddly conflated with tortuous stream beds, where branches, rocks and creeks are sinuously tangled into a single animated presence, and organic forms become boldly stylized shapes. Her colors seem to spring as much from her imagination as from the scenes she’s depicting. “It’s not just about ‘pretty’ or even about serenity,” she says in an interview posted on the Bryan Ohno Gallery website. “It can actually be danger.” Based on sketches she makes while conducting scientific field research in remote parts of the world, these watercolor-and-gouache works on paper testify to “that perfect composition that just exists out there already.” —M.U.

If you go: Adrianne Smits, Bryan Ohno Gallery, through July 14

If the nightly news has you feeling that every tenet of this country is being turned upside down, the impeccably orderly black-and-white photographs of Seattle’s Michael Kenna may provide a welcome restorative effect. Toting his camera around the globe, Kenna trains his eye on outdoor locations — cityscapes, coastal scenes, rural lanes — where the natural world and human activity intersect. In “Skyscraper and Clouds, New York, USA,” the glass face of a high-rise is sublimely fused with a vaporous mackerel sky. In “Jetty and Waiting Ship, Palma, Mallorca, Spain,” it doesn’t matter that the stone jetty pictured is in a state of advanced decay: it still feels like an organized path you could follow. Kenna is especially fond of water reflections that make solid objects — a pier, a line of silhouetted pines on a sandspit — appear to float in a void. You may well want to float off with them. —M.U.

If you go: Michael Kenna, G. Gibson Gallery, though July 14

Make that “the male-on-male gaze.” For Pride Month, Ballard’s GALLERY 1/1 — which specializes in one-of-a-kind photographic prints — has assembled works employing unusual methods to achieve striking effects in their studies of the male body (including, often, studies of the photographers themselves). Baltimore-based Brian Henry searches out abandoned buildings where he poses nude, gets his shot, makes a silver-gelatin print of it, then uses corrosive emulsions to partly obliterate his image. His titles — “Dissipate,” “Wayward,” “Presence” — evoke the haunting atmospheres he conjures. Robert Flynt creates complexly layered laser-prints on vintage anatomy-book illustrations and furnace boiler charts to create dreamlike tableaux. Eric Potts’ diminutive black-and-white Polaroid self-portraits find him adopting extreme, contorted poses. Robert Calafiore’s elaborately staged “Untitled (Figure #21)” is a homoerotic Arabian Nights fantasy that experiments with color in extraordinary ways. Gallery director Dan Shepherd is passionate about this work and volubly informative on how it was created. —M.U.

Let the Sunshine In

Juliette Binoche alone is a good reason to see this highlight of the 2018 Seattle International Film Festival, now returning for a regular run at SIFF Film Center. She gives French director Claire Denis (Beau Travail) a miraculous, mercurial canvas to work with in her talk-driven, serio-comic masterpiece about a newly single middle-aged artist (Binoche) who’s clearly grasping at straws when it comes to jump-starting new relationships. All the film’s characters — Binoche as much as the absurdly flawed men she gets involved with — are hopelessly tangled up in their own inconsistencies and vulnerabilities. Denis keeps the edgy discomfort going right through the closing-credits sequence, in which a soothsayer (Gerard Depardieu) offers Binoche convoluted divinations that are hilariously unhelpful. —M.U.

When, in the last laps of French composer Camille Saint-Saëns’ “Organ” Symphony, Joseph Adam blasts the orchestra into submission on the 4,490-pipe Watjen Concert Organ, all of Benaroya Hall becomes his instrument. The whole building hums; the floor beneath you vibrates. Up to that moment, however, the interplay between organist Adam and the orchestra is a more playful, mysterious business. The generous scale, virtuosic orchestration and varied character of this 1886 masterpiece (fleet, festive, ruminative, fierce, indisputably grand) reportedly prompted composer Charles Gounod to dub Saint-Saëns “the French Beethoven.” Also on the program: Saint-Saëns’ “Danse macabre” and Chopin’s Piano Concerto No. 2 in F minor, with acclaimed British pianist Benjamin Grosvenor as the soloist. —M.U.