Activist who says ICE targeted her will remain in U.S. 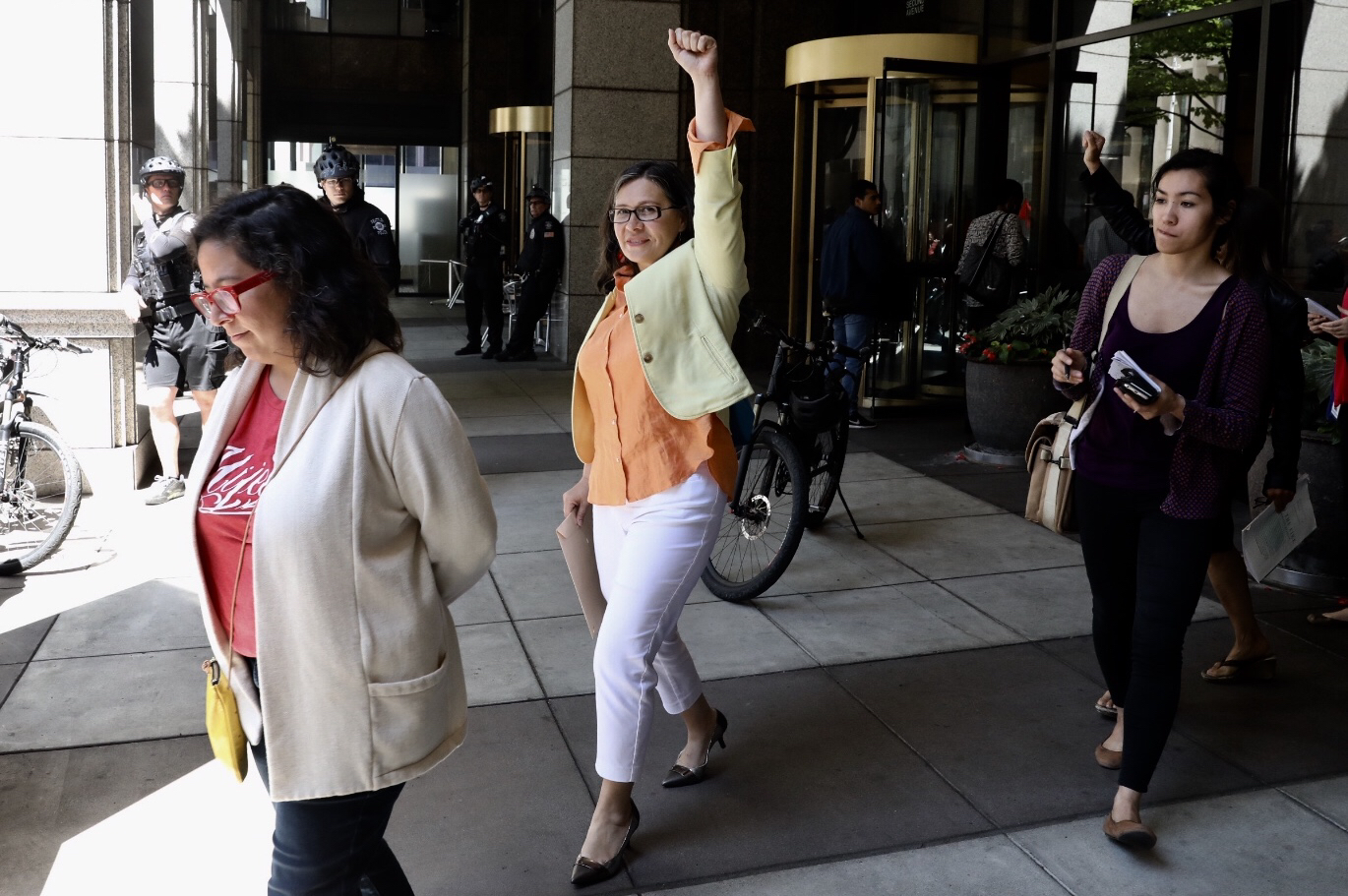 Immigrant-rights activist Maru Mora Villalpando raises her fist in the air as she exits federal immigration court to a crowd of supporters in downtown Seattle, June 26, 2018. (Photo by Matt M. McKnight/Crosscut)

For months, immigrant-rights activist Maru Mora Villalpando had been waiting to walk into a Seattle courtroom to learn her fate: Would she, an undocumented activist, be able to remain in the United States?

On Tuesday, immigration Judge Brett M. Parchert seemed to suggest yes. Parchert told her and her lawyer, Devin Theriot-Orr, that Villalpando could adjust her citizenship status through her daughter Josefina, a U.S. citizen who turns 21 in August.

Under current law, U.S. citizens can petition for certain family members — such as parents, spouses, siblings, and children — and enable them to eventually receive a Green Card or some other type of relief.

Villalpando said she was surprised by the judge’s decision but called it “good news.” As she walked out of the courtroom, Villalpando spoke to others awaiting their immigration hearing, encouraging them to not give up.

When she walked outside, dozens of supporters cheered and waved signs — “Melt ICE!”; “ICE, no te metas con Maru," or “ICE, don’t mess with Maru.”

Villalpando, near tears, with daughter Josefina standing by her side, said: “I did this because of her. I love her with all my heart.” She also spoke of the anguish detained parents who had been separated from their children at the border must feel.

Villalpando, 47, who is originally from Mexico, first arrived in the United States in the 1990s on a tourist visa that has since expired. An outspoken and oft-quoted immigration activist, she has been an advocate in the region for about two decades. She is known as a key organizer of protests at the Northwest Detention Center in Tacoma.

In December, Villalpando received a notice to appear in immigration court — the start of possible deportation proceedings. Documents released soon after showed that federal officials with U.S. Immigration and Customs Enforcement (ICE) learned about Villalpando through news reports and may have even chosen to target her because of her activism. ICE has denied targeting Villalpando for her political stance.

But in documents obtained by Sen. Maria Cantwell’s office, government officials explicitly stated that Villalpando came to the attention of ICE’s local office “after an interview was published in the ‘Whatcom Watch.’” The government official also noted that although Villalpando has no criminal history, she “has extensive involvement in anti-ICE protests and Latino advocacy programs” and has “become a public figure.”

At the rally after the hearing, attorney Theriot-Orr said Villalpando faces a lengthy but “relatively straightforward” process toward achieving legal residence.

“We think this is very encouraging,” Theriot-Orr said, addressing the crowd of supporters.

Villalpando, for her part, said she felt more committed than ever to the plight immigrants face and, with dozens of others that afternoon, marched to a nearby courthouse to protest the U.S. Supreme Court’s decision to uphold President Donald Trump’s ban on travel from mostly Muslim nations.