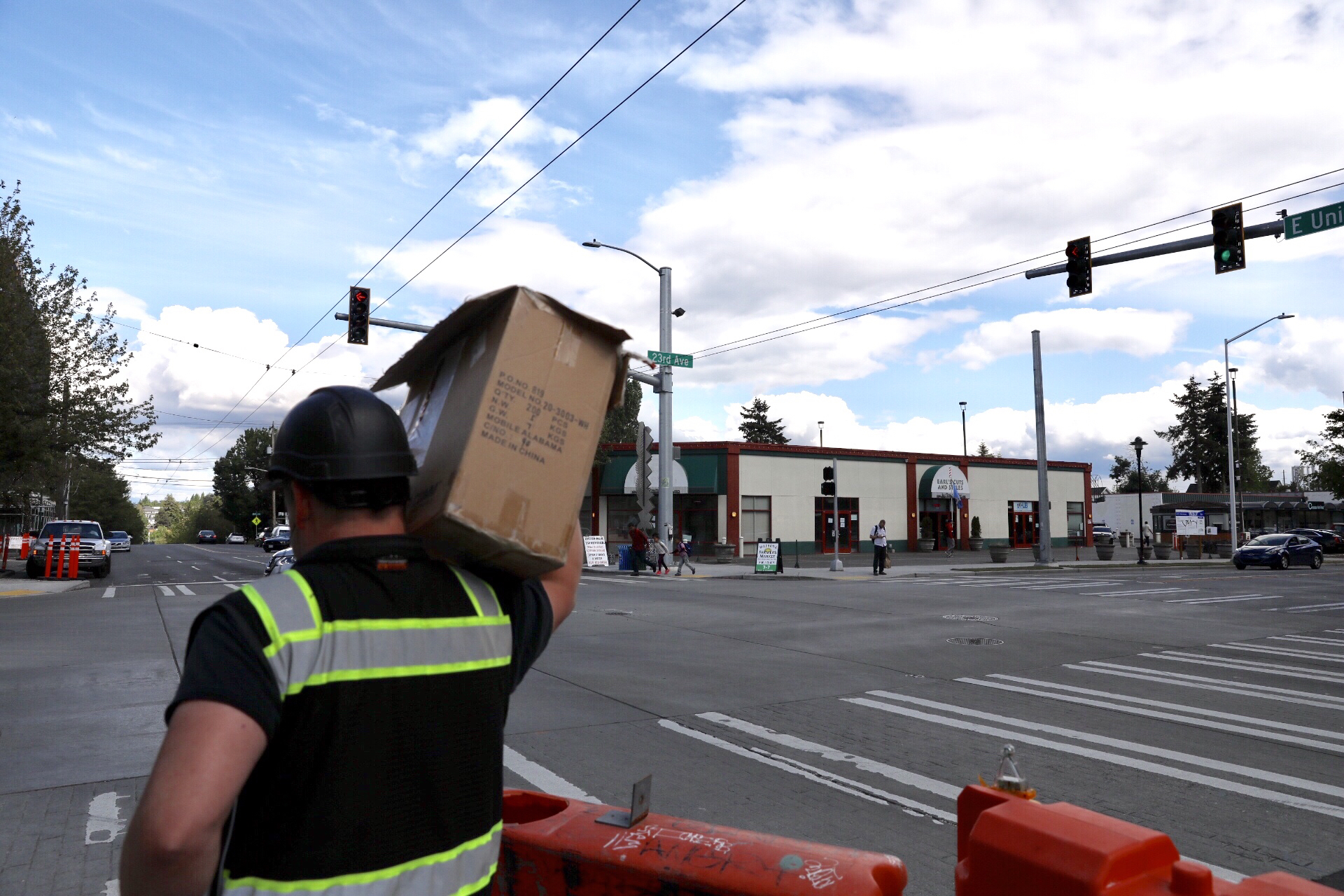 A man carries a package at 23rd and Union in Seattle's Central District. (Photo by Matt M. McKnight/Crosscut)

When Walter Jones passes by the corner of 23rd and Union, he sees his 12-year-old self hustling to make a buck. It was the early 1990s, and he was a ward of the state who was cycling through the foster care system. After class let out at Washington Middle School nearby, Jones would sell cannabis at the Central District intersection as part of a local gang.

Nowadays, that corner is known as “the most controversial block in Seattle,” ground zero for the city’s gentrification battles as home to the popular pot shop Uncle Ike’s, which rankles locals like Jones who were once harassed by the police for selling weed in the same spot. The southeast corner of 23rd and Union, a now-rare bastion of Black-owned businesses called Midtown Center, holds out promise to propel the Central District in a different direction — provided the community and a real estate developer can find common ground.

Back in the ’90s, a football coach yanked Jones off the corner and steered him on a different course. A star running back and linebacker for Franklin, Garfield and O’Dea High Schools, he eventually studied at Central Washington University. Now 40, Jones (no relation to the famous Seattle Seahawks player of the same name) is a mentor to at-risk youth and runs his own consulting firm to connect Black tradespeople with construction jobs that have minority hire contracting requirements.

Jones also participates in a community group advising real estate developer Lake Union Partners on the redevelopment of Midtown Center, the last parcel of land on that storied corner that still looks the way it did when Jones was young.

The low slung building won’t stay that way for long though. The block-long strip mall with a barbershop, post office, convenience store, entrepreneurship center, and used car dealership is slated for demolition by the end of the year to make way for a new mixed-use building.

The impending redevelopment caps a tumultuous saga for the family-owned property that seemed to find an amenable resolution last year. Lake Union Partners signed an agreement with land conservation group Forterra and the Africatown Community Land Trust for a joint development of the block-long site. The agreement includes affordable housing, homeownership opportunities, Black-owned businesses and a 24-hour public space.

In a victory for advocates trying to preserve the Central District’s Black identity, the agreement specifically cites “neighborhood-led development to mitigate displacement of the historic Black community” as one of the project’s shared goals.

But in April, one of the city’s standard blue-and-white impending construction signs showed a generic building rendering that has neighborhood stalwarts like Jones worried their vision for the new Midtown Center has been ignored.

In original ideas that he and fellow residents fed the company, front and center was a village of businesses, residents and public spaces welcoming to Black Seattleites — a “black space,” or at least a “cosmopolitan canopy,” to borrow sociologist Elijah Anderson’s formulation.

“People are concerned because every day, they feel like they are losing their community,” says Africatown president K. Wyking Garrett. He added that people are disappointed in what they have seen so far of what they had expected to be “a community space that honors the African American community.“

Representatives from Lake Union Partners and its architecture firm attended some of the ciphers and offered parameters for the site, namely that the anchor tenant on the corner of 23rd and Union will be a large drugstore. They consider the proposed design to be conceptual site diagrams, not firm site plans, and insist that the final design is not yet complete. The company told Crosscut that their project timeline is available to the public and their weekly meetings are open to community members.

If Africatown’s designs are incorporated, the final product could mean a building that has more in common with the community ethos of Plaza Roberto Maestas in Beacon Hill than the typical new Seattle apartment building with ground-floor retail, like, for example, two of the other corners of 23rd and Union that Lake Union Partners has developed in recent years. The Midtown Center redevelopment will also likely be subject to new Central Area design guidelines, recently approved by the city, that call for Afrocentric design standards in real estate developments going forward in the neighborhood.

“We talked a lot about the 23rd and Union corner and making that the entrance to the village,” Jones says. Other corners that would access the property do not carry the same resonance for the neighborhood, he says.

“That’s a very special corner — a lot of men have been shot there by the police unjustly,” Jones says. He believes the highly-visible corner storefront should go to a Black-owned business with neighborhood roots, like the soul food restaurant Miss Helen’s Soul Bistro. (On this point, Jones differs from Garrett, who favors Black-owned businesses regardless of neighborhood pedigree.)

“I don’t think they’ve outreached enough to find a reputable African-American tenant that can hold their own on that corner,” Jones says. “We didn’t want Walgreens. That doesn’t represent us.”

Patrick Foley, a Lake Union Partners principal, says the company is still looking for an anchor tenant, but that a lucrative corner lease would allow him to offer below-market rent for the other retail spaces, presumably to help draw in Black-owned businesses.

Foley insists that the image on the new construction sign — currently posted in front of Earl’s Cuts and Styles — is not reflective of the final product. Rather, it’s a stand-in used for a pro forma part of the development process, securing a so-called master use permit.

“There’s still plenty of time for change and modifications,” he says. “We are not baked and finished.”

He points to a work-in-progress concept for a “global grid,” which he says “is multi-cultural, and weaves patterns and colors in the paving of the public square, and elements of the exterior façade of the building.” He also cites his company’s intention to reinstall a historic sculpture by a local Black artist, “The Fountain of Triumph,” currently under restoration.

(In addition to recommendations from Africatown and the Central Area Design Guidelines, Lake Union Partners also received some 400 comments from an online neighborhood engagement platform.)

But little public outreach from Lake Union Partners since the project received initial approval through the city’s design review process in late January left a community that invested time and energy in a design process feeling anxious, though a public meeting has tentatively been scheduled for June.

“What I am concerned about in Seattle process is that developers are on a completely separate timeline,” says Donald King, an architect who helped draft the Central Area Design Guidelines and has been a close adviser to both Lake Union Partners and Africatown on Midtown Center. “Time is money to them and they move much faster than a nonprofit [like Africatown] can move.”

Ultimately, King says, the need to secure some form of Africatown’s design proposal comes down to the ticking clock ahead of the wrecking ball. “We are losing ground,” he says. “We are losing time.”

And for Central District residents, time feels like it is slipping away.

“Black people are being eliminated from the Central District in Seattle,” Garrett says. “It’s almost as if we were never even here after being here for 130 years.”