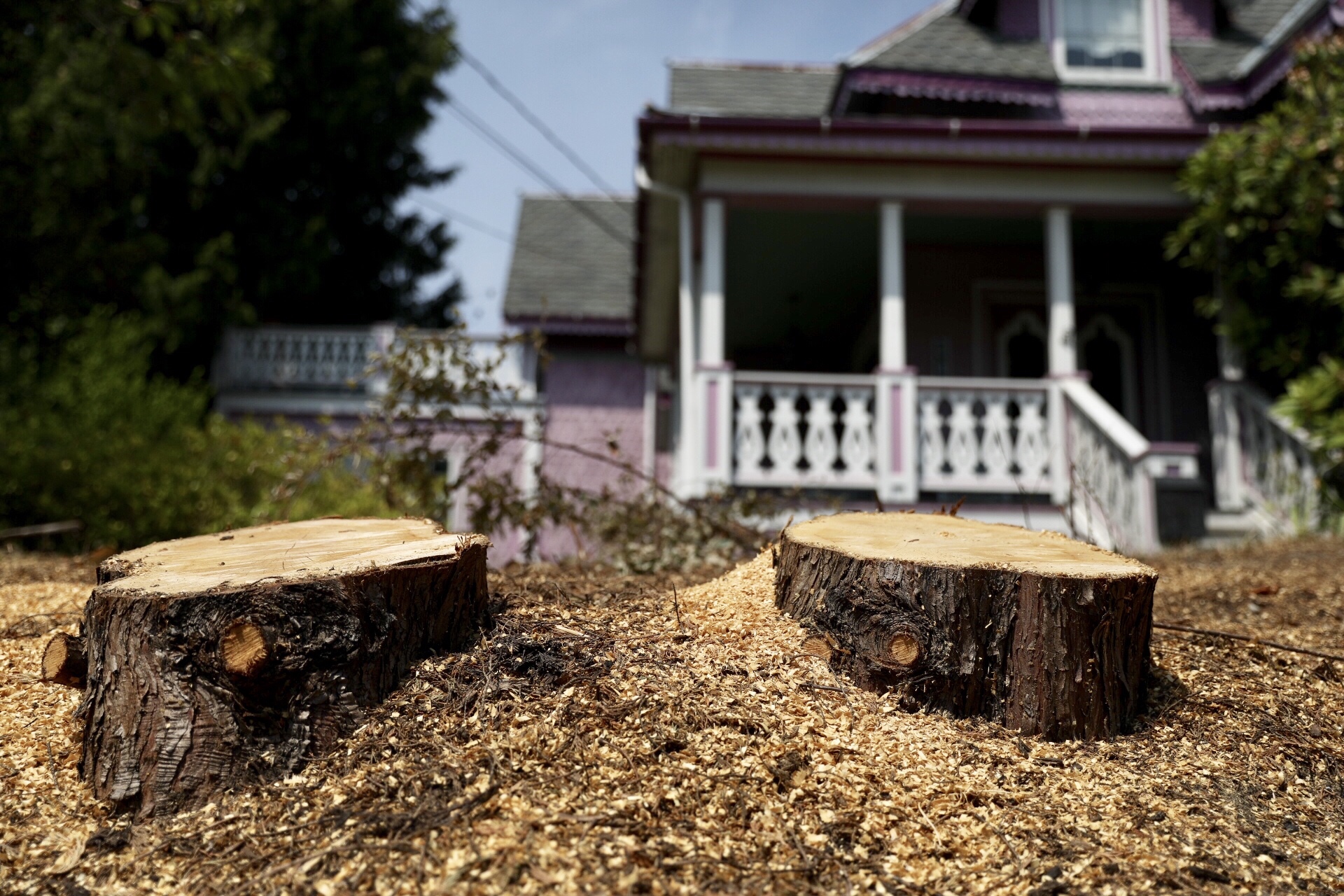 If you want to chop down a tree in this city, not much is going to stop you — and the city of Seattle says that’s becoming a problem for many reasons.

Homeowners are limited to cutting down three trees per year and cannot remove larger, high-quality trees called exceptional trees unless they are diseased or deemed a hazard to a home or to a person’s safety. But enforcement relies on people seeing and submitting violations and it’s easy enough to get a tree classified as hazardous, whether true or not.

Regulations are even looser for developers.

They can wipe a lot clear of trees if any, in the city’s words, “would prevent a project from meeting the development potential of the zone.” In some zones, developers are required to use a city scoresheet  called Green Factor to calculate requirements for replacing trees removed, but the tool has been flagged time and again by the city’s Urban Forestry Commission and others as insufficient. Other types of vegetation can be used to satisfy the replacement requirement.

This May, a Seattle City Council central staff memo said that the consequence of all that is that, “Unrelated to development, exceptional trees and groves have been removed, with most removals occurring in Environmentally Critical Areas, particularly landslide-prone areas. New development has contributed to the loss of trees, despite tree planting requirements.”

That’s a problem for a city trying to grow its tree canopy even as it adds population, tries to maintain a degree of housing affordability and encourages density. Urban forests are extremely valuable — one study found the pollution-fighting, stormwater-mitigating power of Seattle’s trees is worth $4.9 billion.  Because of that, the city’s set a goal of increasing the total tree canopy modestly from its current 28 percent to 30 percent coverage by 2037 with a 40 percent stretch goal.

Despite trees’ environmental value, Seattle has had a hard time tracking the forests’ growth and loss. The city has mapped the canopy regularly since the 1970s, but because the technologies to do so have evolved and improved, year to year comparisons of coverage aren’t accurate measures of growth or loss. The city has used historical data from Google Earth to evaluate canopy loss in recent years. One study found there was a 2 percent loss in canopy between 2007 and 2015 (but the study has a margin of error of +/- 3 percent).

A 2016 study used a form of 3D imaging from laser measurements taken aboard airplanes, and it painted a relatively rosy picture, coming up with the 28 percent coverage figure. That’s despite the development that had occurred at that point. Single-family zoned neighborhoods provide 63 percent of the city canopy.

Because single-family zones play such an outsized role in the urban forest, Councilmember Rob Johnson hopes to address canopy loss by creating a strict tree removal permit system for homeowners that would require people to either replace the trees they remove or pay a fee into a fund to get trees planted in neighborhoods where they’re lacking. The in-lieu fees would also help pay for better enforcement.

“We are losing a lot of tree canopy on private land because there is no tree permit required for most single-family construction or for [tree removal on] single-family lots,” Johnson said. “My hope is that the ordinance we will try to adopt by the end of summer will create a framework that will grow the canopy.”

Johnson’s idea would require homeowners to get permits to remove trees 12 inches in diameter or larger. If they decided to pay into the fund, the fees would be on a sliding scale based on the quality of the tree and could be as much as $10,000 for healthy, exceptional trees.

“If you’re a bad actor you should pay for the full replacement of that tree. And by bad actor I’m thinking of the people in West Seattle who cut down trees to improve views. … We estimate the value of some of Seattle’s exceptional trees at $40,000 to $50,000,” Johnson said.

Johnson is also floating replacement requirements for new development in single-family and residential small lot zones, flexible design standards to help developers avoid the need for tree removal and the addition of a permit requirement for hazardous tree removal.

Friends of Urban Forests’ Steve Zemke, a member of the city’s volunteer Urban Forestry Commission, says he supports the permit system for private homeowners. Permits are commonplace in major cities in North America, as well in such parts of the Puget Sound region as Redmond, Kirkland and Bellevue. But, If the city hopes to meet its 2037 goal, Zemke says, it needs to require permits and fees of developers too.

The Urban Forestry Commission has also officially called on Johnson take the regulations further. Besides a permit system for developers and several other measures, the commission wants the regulations to apply to trees 6 inches in diameter or more instead of 12, which would cover 45 percent of trees in the city instead of 18 percent.

Of course, tree canopy is not the city’s only pressing goal. The Housing Affordability and Livability Agenda (HALA) calls for construction of 50,000 units of housing by 2025, and the two goals sometimes clash in people’s minds.

Tree protection, in addition to its environmental value, has become a standard talking point for NIMBYs (Not In My Backyard), who sometimes focus on stopping new development by any means and argue against the city’s plans to increase density because so much of the canopy is in single-family zones. Johnson counters that the upzone proposals only impact 6 percent of the city’s single-family zones and that single-family zones are already losing trees to remodels and new construction that replace, for example, an old 1-000 square foot home with a 3,000 square foot home.

Bryce Yadon, state policy director with sustainability nonprofit Futurewise, looks for a middle ground, saying, “The Seattle tree canopy is extremely important to the city. We need to figure out how to actively increase tree canopy while making sure we continue to accept and create growth in the city so we’re not cutting down forests for sprawling development outside the city.”

He thinks that can be accomplished by maximizing tree planting in the public rights of way, creating pocket parks with trees, and working on a more equitable distribution of trees throughout the city. The 2016 study found that whiter, wealthier neighborhoods have more tree canopy than lower-income neighborhoods and communities of color. Neighborhoods near the Duwamish industrial area have the lowest density of trees).

Zemke of the Friends of Urban Forests agrees that it’s not a zero-sum game.

“It’s not housing or no housing,” he says. “It’s not trees or no trees. It’s about finding a balance.”