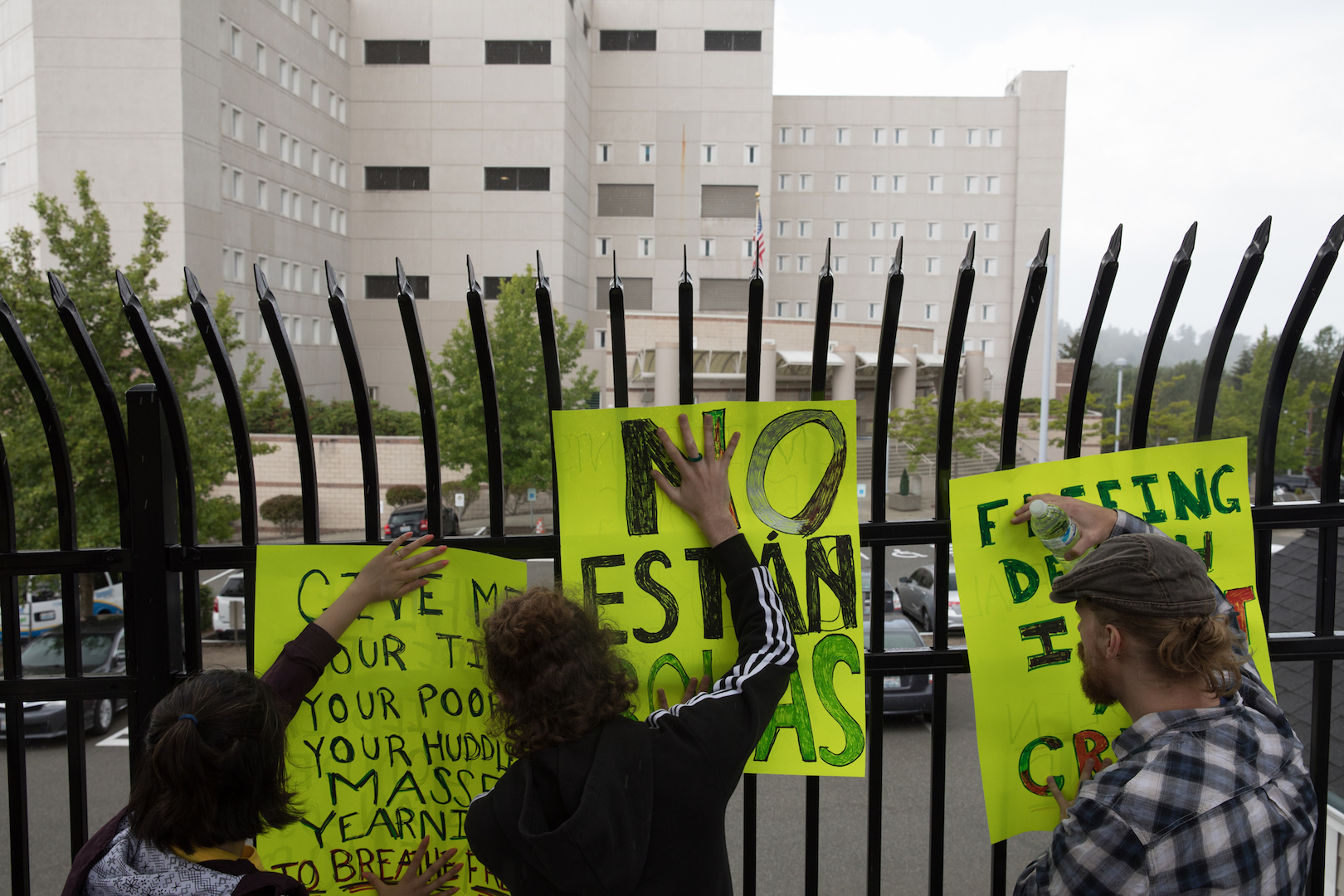 Three immigrant mothers separated from their children and detained in the Seattle area are suing the Trump administration.

The Northwest Immigrant Rights Project is representing the three detained parents. In what the group refers to as the first lawsuit of its kind in the country, the organization is suing the administration for separating parents from their children and for denying them "credible fear interviews" — the first step in the asylum process. Officials conduct these interviews to determine whether an individual’s claim of persecution or torture in his or her home country is credible.

The Northwest Immigrant Rights Project filed the lawsuit in U.S. District Court on Monday against U.S. Immigration and Customs Enforcement, U.S. Department of Homeland Security, U.S. Customs and Border Protection and Office of Refugee Resettlement, among others. Both ICE and Customs and Border Protection said they could not comment on pending litigation.

The lawsuit names three asylum seekers: Yolany Padilla, Ibis Guzman and Blanca Orantes. NWIRP points out, however, that it is suing on behalf of at least 46 parents in Washington state who were separated from their children and who find themselves in the same predicament as the mothers named in the suit.

Across the country, according to both the lawsuit and numerous news reports, more than 2,000 immigrant children have been separated from their parents under President Donald Trump’s new “zero-tolerance” policy, which seeks to criminally prosecute anyone who crosses the border without documentation. On June 20, after considerable public outcry, Trump issued an Executive Order meant to end the practice of family separation.

Critics of the executive order, however, fear the Trump administration may end family separation only to turn around and indefinitely detain parents and children. Although immigration officials cannot legally hold children for longer than 20 days, Trump’s order set in motion a request to get a court to approve detaining families for longer than that. In addition, critics point out, there is still no plan to help those who have already been separated from loved ones.

“The government is dragging its heels all the while separating parents from their children,” said Matt Adams, NWIRP's legal director, referring to the lack of interviews for those seeking asylum. “It’s absolutely egregious that they’ve dragged it on this long.”

According to Adams and other legal experts, credible-fear interviews should happen soon after someone is detained. Although officials at the Tacoma Northwest Detention Center, where two of the mothers are being held, are beginning to schedule such interviews, the asylum claim process has already been delayed by weeks and could take months more. Part of the desperation, Adams said, is that the government has no concrete plan to reunite the parents with their children while the typically lengthy asylum process is underway.

The lawsuit, citing medical experts such as The American Association of Pediatrics, claims the separation of parents from their children can cause “irreparable psychological damage.”

“Forced separation from parents causes severe trauma to children, especially those who are already traumatized and are fleeing persecution in their home countries. The resulting cognitive and emotional damage can be permanent,” reads the lawsuit.

Under previous administrations, families were typically detained together and often released on bond, or by some other means, while their immigration case moved forward. On Monday, top border security official Kevin K. McAleenan, the commissioner of U.S. Customs and Border Protection, announced a return to this policy. McAleenan said due to a lack of detention space for families, many could expect to be quickly released, with a promise to return for a court hearing. (U.S. Attorney General Jeff Sessions appeared to disagree with McAleenan's assessment and vowed to continue enforcing the administration's zero-tolerance policy.)

The reality for mothers like Ibis Guzman has been drastically different. Border Patrol captured Guzman, a migrant from Honduras, on May 16 along the southern border. An officer then forcibly took Guzman’s five-year-old son and lied to her, according to the lawsuit, promising that she would be able to see him again in three days. Instead, Guzman was transported to the Federal Detention Center in SeaTac. It was there when she was told her son had been placed with Baptist Child and Family Services in San Antonio, Texas. Guzman has been unable to contact him. Earlier this month, Guzman was transferred to the Northwest Detention Center in Tacoma.

Guzman is “extremely distraught and depressed” and is worried her son is “also experiencing anxiety from the separation and may not be eating.”

“In Honduras, she was a single mother and was with her son almost constantly, so being apart from him affects her profoundly,” the lawsuit states.

Orantes, who is from El Salvador, has a similar story, according to the lawsuit. She also entered the U.S. in May and immediately turned herself into Border Patrol officials. She told them she was seeking asylum. When an officer announced he was taking her 8-year-old son, he “began crying and pleading” with his mother, asking her not to leave. Orantes has not seen her son since. Earlier this month, “an ICE officer handed her a slip of paper advising that her son was being held at Children’s Home of Kingston, in Kingston, New York.” Orantes is now also being held at the Northwest Detention Center. She has spoken to her son twice.

The third woman named in the lawsuit — Padilla — was fleeing Honduras when she arrived in the U.S. last month. She and her son were promptly arrested by a Border Patrol agent. When the officer announced the families would be separated, “the children old enough to understand the officer began to cry.” Padilla’s son clutched her shirt and said, “No, mommy, I don’t want to go,” according to the lawsuit. Padilla reassured her son the separation would be short. She remains at the Federal Detention Center in SeaTac. Meanwhile, her son is at the Cayuga Center in New York. She’s talked to him once, her son crying the entire time.

Even if and when others like Padilla get their day in court, there’s no guarantee an immigration judge will grant her, or others like her, asylum. In 2017, according to the Transactional Records Access Clearinghouse, or TRAC, at Syracuse University, 30,179 asylum cases were decided by judges — the largest number of cases since 2005. More than half, however — 61.8 percent of applicants — were denied asylum status, with those from Honduras, Guatemala and El Salvador facing a particularly high likelihood of being denied.

Immigration officials have transferred approximately 206 detainees to the Seattle area in recent weeks.