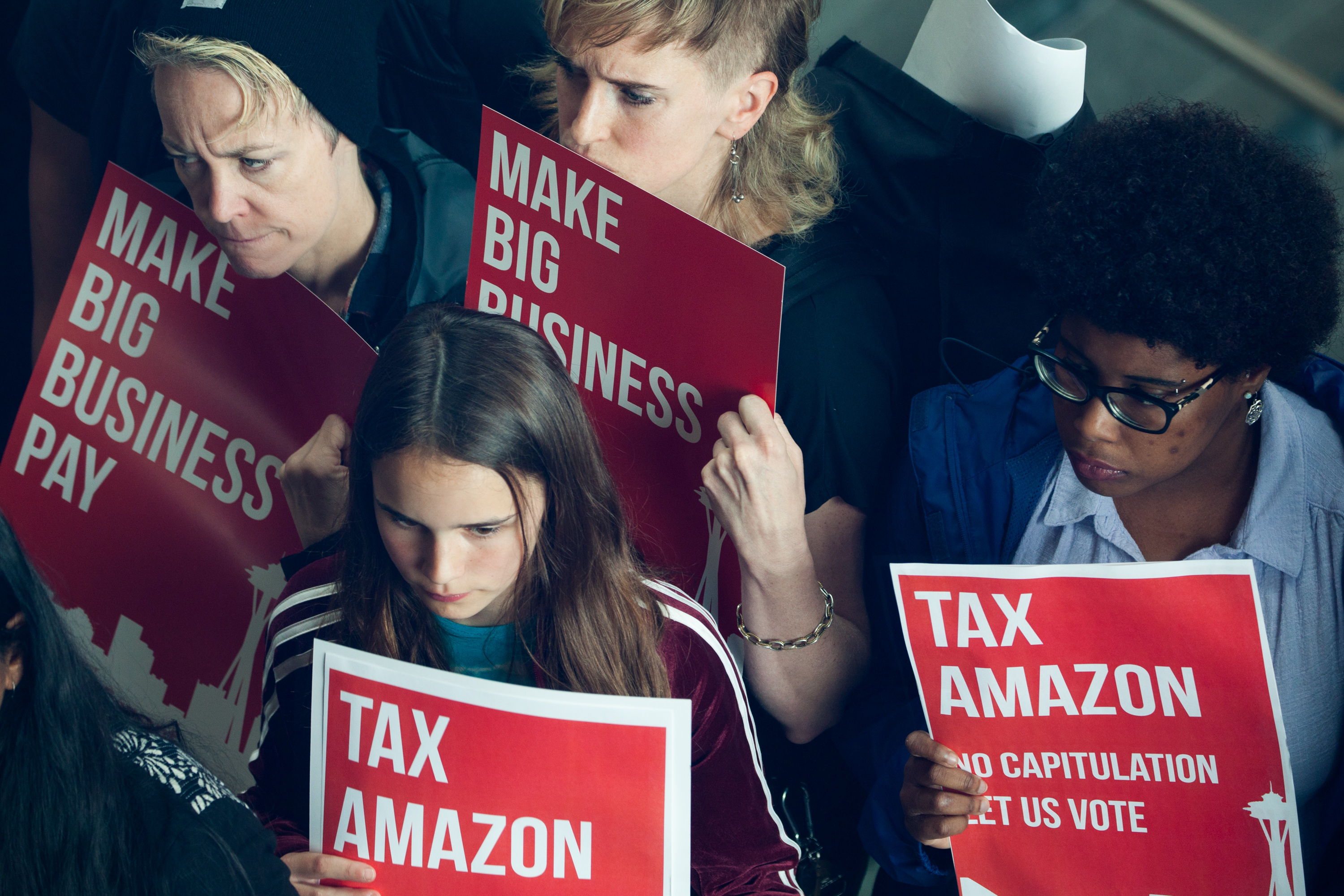 Supporters of a tax on businesses were left angry and frustrated as the City Council repealed the measure. (Photo by Matt M. McKnight/Crosscut.)

Just a month ago the Seattle City Council, with the support of new Mayor Jenny Durkan, unanimously approved a $275 per employee tax on Seattle biggest employers.

That vote provoked an intense blowback campaign to repeal the tax through a referendum vote that sent the council reeling. Less than a month later, again with the full support of the mayor, the council repealed the tax by a 7-to-2 vote — unprecedented and historic. Why did it happen? Any big losers? What will change?

1. The campaign was driven by public revulsion, not Big Business.

Councilmember Kshama Sawant accuses her council colleagues of “a cowardly betrayal” and insists that the repeal represents a capitulation to Big Business. But let’s take a step back for a moment. In 2014, Big Business opposed the $15 minimum wage (so did a lot of small businesses), but it passed anyway. Parts of Big Business later opposed the sick leave, vacation and scheduling rules. They happened anyway.

Let’s take another step back. Those weren’t tech workers in khakis bellowing “No Head Tax!” at Sawant during her abbreviated press conference in front of Amazon HQ last month. They were rank and file union members of Iron Workers Local 86, acting with the full support of their leadership.

Let’s take one more step back. Crosscut reported earlier this month that a poll taken by FM3 Research in late March for the Chamber of Commerce (but strangely not released during the head tax debate), showed that 81 percent of city residents believed the number of homeless encampments posed an “extremely” or “very” serious problem. And 83 percent pronounced themselves dissatisfied with how the Council has addressed homelessness, with 51 percent “very dissatisfied.” In some places, people stood in line to sign the referendum petition. The petitioners probably could have delivered upward of 55,000 names — more than three times the number of valid signatures needed — to qualify it for the November ballot had the council not hurriedly repealed it themselves.

The blowback was really a unified coalition of angry neighbors and local businesspeople revolting against a City Hall that seems obtuse in the extreme when it comes to listening to constituents and responding to problems by doing little more than throwing more money at them.

2. Kshama Sawant is a spent force.

Over the last five years, Sawant, a self-professed collectivist (her upcoming, much delayed autobiography is tentatively entitled “American Socialist”) did a superb job both before and after joining the council of pulling its center of gravity to the left. More than anyone, she shaped the city’s policy agenda and set the tone of the debate.

But that was then. Ideologues aren’t fond of listening to others — particularly critics — or working well with colleagues. And Sawant’s growing chorus of critics — beginning with those Ironworkers in Local 86 — aren’t afraid of her anymore. When Sawant tried to regain some momentum by leading a march on Amazon the following weekend, barely a hundred people showed up despite the good weather, and they were mostly the usual suspects. Her movement is not growing but shrinking, a high irony in a blue city during the Age of Trump.

And her tactics of disruption and harassment don’t work like they used to. During the minimum wage battle a few years ago, her allies pounced on any business (particularly small businesses) that dared publicly oppose the idea, with threats of picketing. It didn’t do much for public discourse, but it worked as a tactic of intimidation. Some tried it again last month during the early days of the referendum campaign and the effort backfired. Business more than doubled at Dan Austin’s Peel and Press dinner restaurant in West Seattle’s Morgan Street Jackson when word got out that his name was on what was apparently a boycott list. Other companies reported the same effect — the boycott became a “buycott.” The boycott became politically toxic.

Sawant’s voice inside council chambers is also losing its bite. When, during the debate over repealing the head tax, she said she was “speaking as an economist,” some in the crowd broke out in derisive laughter. She deliberately egged on her supporters to drown out the vote in a vain effort to sabotage it, a tactic from the far left’s handbook. Like so much else in Sawant’s tenure lately, it merely irritated, before falling flat.

Sawant is one of the seven members up for re-election next year. If she wants to publish that book as an elected official, she’d better get those final edits to the publisher.

3. The City Council still doesn’t get it on homelessness.

Just about everyone outside the City Council who doesn’t have financial ties to the Homeless Industrial Complex realizes that there is no association between more public money and less homelessness on the streets. In fact, you could actually argue that more money — and how it’s been spent — has worsened it. Seattle and King County promised to spend unprecedented amounts of cash on a massive campaign that 13 years ago promised to “end” — not reduce, not control, but "end" homelessness in Seattle. Spend they did, but homelessness as measured by the annual One Night Count is almost 50 percent worse now than in 2005 (from about 8,300 at the end of 2004 to just over 12,100 in January 2018).

Why? Because City Hall has worked hand in hand with homeless activists to allow street people to ignore city laws, resulting in a huge upswing in illegal homeless encampments, mostly inhabited by people with drug and alcohol problems.

For years residents and business owners have warned City Council members that exempting homeless vagrants from laws that everyone else is expected to follow was making the city a magnet for meth and heroin addicts. Instead the City Council keeps doubling down. In just the last ten days, Councilmember Teresa Mosqueda (who voted with Sawant to keep the head tax) has talked favorably of buying a heroin injection van that would cost more than $2.5 million to operate annually. She is inspired by the Insite supervised heroin injection site in Vancouver, British Columbia, but it’s not clear why. In 2010 about 200 people a year died of drug overdoses in British Columbia. Last year: over 1,400.

Then a couple days later Councilmember Sally Bagshaw, who once suggested reopening “The Jungle,” opined that perhaps heroin could be supplied to some addicts. She later posted a statement that she had meant that she wanted to explore the thinking of other cities that supply heroin but doesn't support idea for Seattle. But, after all, if we don’t want addicts risking overdose, shouldn’t we also ensure that their smack isn’t laced with fentanyl that could kill them? How better to do that than by supplying them the heroin? (By the way, isn’t all this a felony?)

Until laws against illegal camping, illegal RVs, being drunk or high in public, using sidewalks and other people’s property to defecate, littering, possessing stolen property, using drugs, trespassing, etc., are enforced, the problem will grow. How do we know? Because it’s been happening pretty much everywhere in this city, which explains the widespread anger. Yet the council still thinks it’s all about more money.

Thanks to the referendum organized against the head tax, a citywide coalition now exists to organize, fund and staff a reform slate of new candidates to challenge all seven of the incumbent council members running in next year’s election. As the head tax fight well illustrates, a showdown over the values that will guide this city is long overdue.

This article has been updated to note Councilmember Bagshaw's posting of a clarification of her thinking on supplying drugs.