Hundreds turn out to support detained mothers: ‘This is not who America is’ 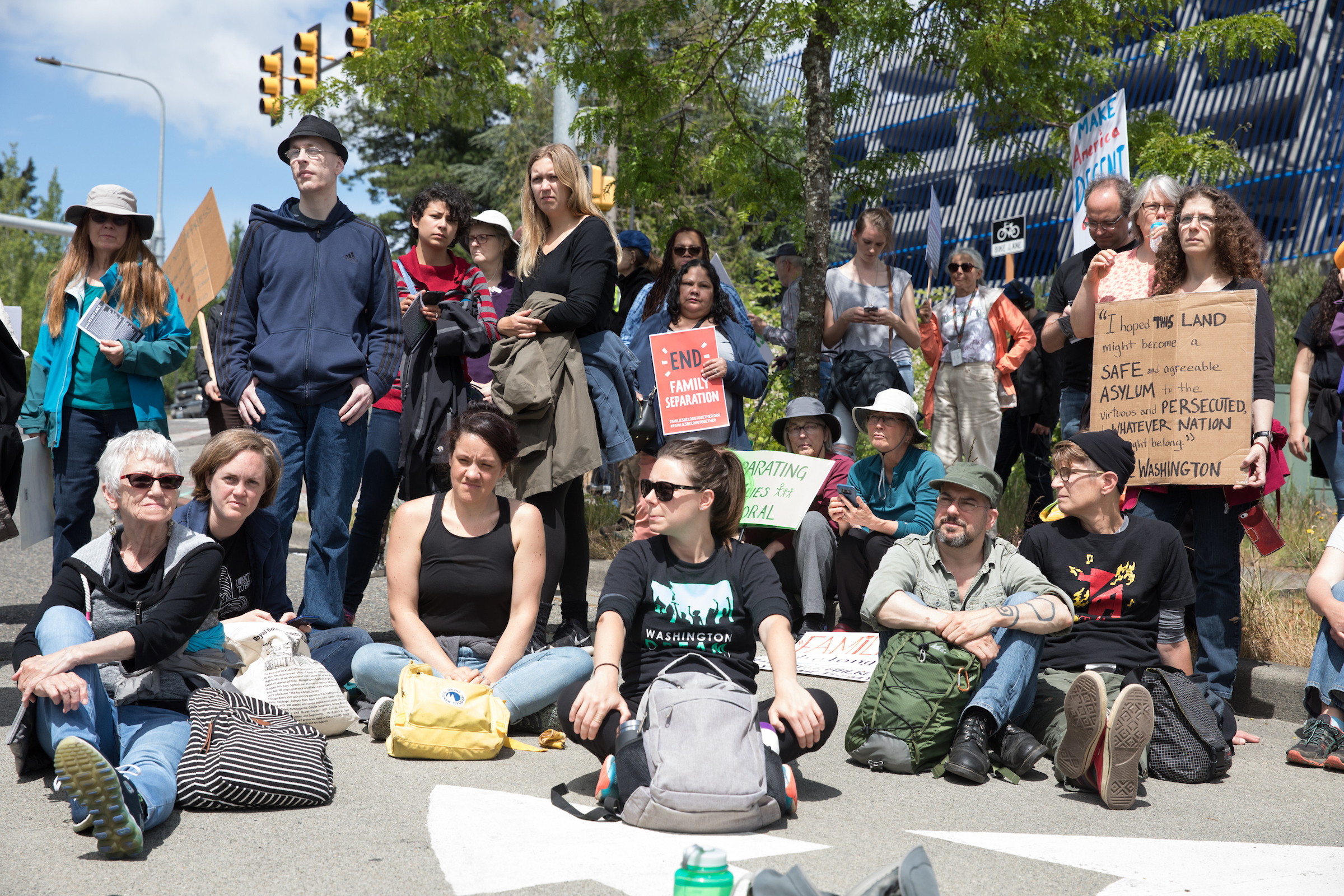 Even in the rain, hundreds of protesters from all over the region stood for hours outside the Federal Detention Center, SeaTac on Saturday afternoon. They held signs in both English and Spanish criticizing the Trump administration for its new "zero tolerance" immigration policy that has separated hundreds of asylum seekers from their children.

“Asylees are often forced to flee,” said Erika Berg, 60, a single mother from Ballard who has worked with asylum youth in the past.

Berg said she believes much of the public doesn’t understand the kind of threat asylum seekers are under. “It’s not just trying to find a better opportunity. It’s trying to save your life.”

“I just can’t imagine hearing about something like this and not turning out,” said Erika Locatelli, 36, who owns two Montessori pre-K schools in Madrona.

“I think being separated from your family is something that lasts a lifetime,” Locatelli said. “It’s super important to me to support all families and all children.

Stephanie Plasencia, 25, a paralegal from Kent who is a board member of the Latino Civic Alliance, shook her head and said: “This just needs to stop. This is not who America is, we help people, we don’t separate families.”

On May 7, the Trump administration announced it would start criminally prosecuting all people apprehended at the border who were trying to cross into the United States without documentation, even those seeking asylum. When announcing the new policy last month, U.S. Attorney General Jeff Sessions defended it by saying: “We don’t want to separate families, but we don’t want families to come to the border illegally and attempt to enter into this country improperly."

"I want to be clear," added Thomas Homan, deputy director of Immigration and Customs Enforcement, or ICE. The Department of Homeland Security "does not have a blanket policy on separating families as a deterrent."

According to news reports, even before the zero tolerance policy was announced, from October 2017 to mid-April an estimated 700 immigrant children had already been separated from their parents. Over the past week, approximately 206 detainees — many of them women who were separated from their children near the U.S.-Mexico border — arrived in Seattle.

The majority of the detainees at the prison are from violent Central American countries — Guatemala, Honduras, El Salvador — where they fear for their own lives as well as the lives of their children.

In addition to shouting at prison officials, the protesters on Saturday wrote letters to the detainees and to two government officials: the acting U.S. Attorney for the Western District of Washington, Annette Hayes, and Dan Sproul, warden of the SeaTac prison.

On Thursday, Washington Gov. Jay Inslee and Washington state Attorney General Bob Ferguson sent a letter to Hayes, as well as to officials with the SeaTac detention center and ICE, saying they have “serious concerns” about the treatment of the asylum seekers.

Earlier on Saturday, U.S. Rep. Pramila Jayapal, D-Seattle, toured the SeaTac prison and met with some of the female inmates. The member of Congress said about a third of the women she met are mothers who have no idea where their children are. According to Jayapal, the women were simply given slips of papers with the names of their children on them. One woman claimed she was mistakenly given the names of someone else’s children. There are also 32 men among the prisoners who were detained at the border and transferred to the SeaTac facility.

“It was just heartbreaking,” Jayapal said in an interview after a press conference.

Referring to President Donald Trump's references to immigrants as criminals, murderers and rapists, Jayapal said: “They’re not murderers, not terrorists, not any of the things Trump describes them as. They’re mothers.”

Jayapal and other Washington state political leaders say the problem is that many of these women are not only mothers but asylum seekers who, under previous administrations, would have never been transferred to a federal prison but instead interviewed to determine whether their asylum claim is credible.

“We’ve never seen anything like this kind of cruel and barbaric treatment at the border,” Jayapal continued.

Jayapal was joined at the press conference by King County Executive Dow Constantine.  “All of you — every single person here can imagine," he said, "what it would mean to have your child taken from you and then to be put on a plane and flown across an unfamiliar continent and imprisoned with no idea where your child is.”

State Attorney General Ferguson left open the possibility of suing the government over the new zero tolerance policy, saying his office was continuing to gather information.