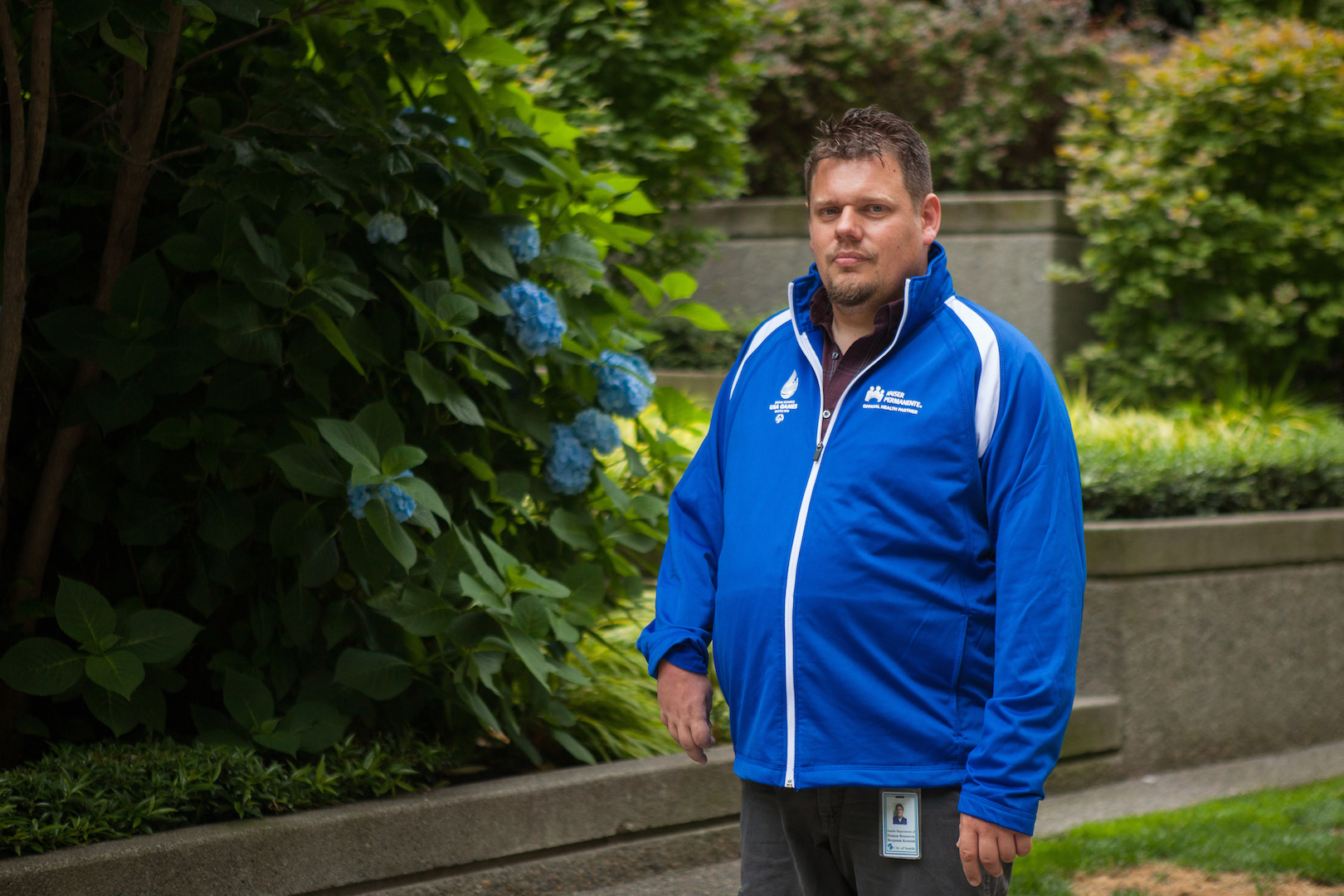 Benjamin Kennish, a Special Olympics athlete for more than 30 years, poses for a portrait at the Special Olympics USA Games headquarters in downtown Seattle on Wednesday, June 27, 2018. Kennish will be playing unified flag football at the USA Games. (Photo by Jovelle Tamayo for Crosscut)

The great part about the American love for independence is that it immediately goes away when you join a sports team. Suddenly all is for one and one is for all. But as soon as that grows tiresome, you can re-embrace independence with golf, tennis, skiing, running — sports where success depends almost entirely on the lone owner-operator.

But what if there isn't a fit for either independence or team? It gets hard.

"In school, I used to get in fights a lot," said Benjamin Kennish. He has a non-working arm, a result of a pre-natal stroke that damaged his right side. In the often cruel world of childhood, he said he was called a cripple, a retard.

"I was trying to gain respect," he said. "Just because I'm disabled doesn't mean I'm not a human being, doesn't mean I don't have feelings.

"I've learned how to walk away. I take a breath, try to walk away. But when it comes to other disabled people [being taunted], it's kinda hard to walk away. They can't defend themselves. You try to step in and say, 'Hey, this isn't right.'"

Starting Sunday for six days in Seattle, things will be right for Kennish and 4,000 other athletes, including 300 from Washington state, the largest delegation. In venues around the Puget Sound area hosting 14 team and individual sports, the Special Olympics USA Games will celebrate inclusion, success and dignity with athletes from all 50 states and the District of Columbia. This year is the Special Olympics' 50th anniversary.

In 2014, Special Olympics Washington submitted a bid to Special Olympics North America to host the the 2018 games, the fourth event following the first in 2006 in Ames, Iowa; then 2010 in Lincoln, Neb., and 2014 in Lawrenceville, N.J.

After a competitive bid process, Seattle was selected as host city in May 2015. As an independent non-profit under CEO Beth Knox, the Games Organizing Committee expects to raise funds privately from sponsors and donors to cover the expense of staging the largest sports event — in terms of participants — the region has hosted since the 1990 Goodwill Games.

Kennish, 38, has been an accounting tech in human resources with the City of Seattle for the past three years and a longtime believer in the Special Olympics.

"My mom got me into Special Olympics when I was seven," he said. "I just wanted to distract myself from real life. I didn't think about it much, but I started winning a lot.

"It was a life-changer."

Founded in 1968 by Eunice Kennedy Shriver, the Special Olympics movement has grown to more than 5.7 million athletes and Unified partners in 172 countries. With the support of more than one million coaches and volunteers, Special Olympics offers 32 Olympics-type sports and more than 108,000 games and competitions throughout the year.

More than 10,000 volunteers have been recruited to support the Games. About 10,000 family members and friends and 70,000 spectators are expected to attend.

"Seattle has a long history as a community of inclusivity," said Ali Daniels, vice president of Visit Seattle. "We believe in standing up, showing up and we are committed to building a community of acceptance and respect for everyone. We are honored to be the host city.

"These games embody the best of humanity and athletic competition. That spirit will be matched by a community that knows when we all stand up, we win together.”

Kennish started with track, running all distances and competed in the shot put and the softball throw. He began softball at 12.

"If I get a grounder in my glove, I take it off and throw," he said. "It takes time and effort and a little bit of skill to do it — and not get discouraged if you drop the ball."

For the USA Games, Kennish, a Federal Way native and graduate of Thomas Jefferson High School, is a flag-football player. He plays center and wide receiver in the five-on-five Unified sport, meaning teams that include athletes with and without intellectual disabilities.

"Starting off in football, a lot of my teammates said I couldn't catch," he said. "I proved them wrong. I can turn my body the right way and catch one-handed.

"I don't get discouraged. I have a little 'hatred' that fuels me, and turns the fuel into a positive."

Kennish might be the second-best one-handed football player in Seattle, just behind Shaquem Griffin, the Seahawks' rookie linebacker from Central Florida whose perseverance became the top national story of the NFL draft in April.

Griffin was added this week as co-Grand Marshall of the Games. At the age of four, he had his left hand amputated because of amniotic band syndrome, also a pre-birth condition, which prevented full development of the hand, causing intense pain upon contact.

"That's kind of what happened to me — a band wrapped around my neck and cut my oxygen," Kennish said. "I'd love to meet him, someone who has a somewhat similar disability.

"I've learned to do everything one-handed. So I can relate."

For six years prior to his hire by the city, Kennish was a cashier at the Federal Way Walmart, where he won an employee award.

"I was voted tops in the region — Washington, Oregon, California and Nevada — because I was fast and efficient," he said. "They want me back, but I can't. I'm done with the retail world."

"I don't see myself as an athlete as much as a person who can inspire others," he said. "To have a positive attitude and not let a disability affect you.

"Try your hardest and have fun."

Independent or team, that works.

A 2,018-member choir, one of the largest vocal ensembles in state history, will serve as a living backdrop to the show. Doors open at 11 a.m. Tickets are $20 for general admission and $65 for reserved seating. More information here.