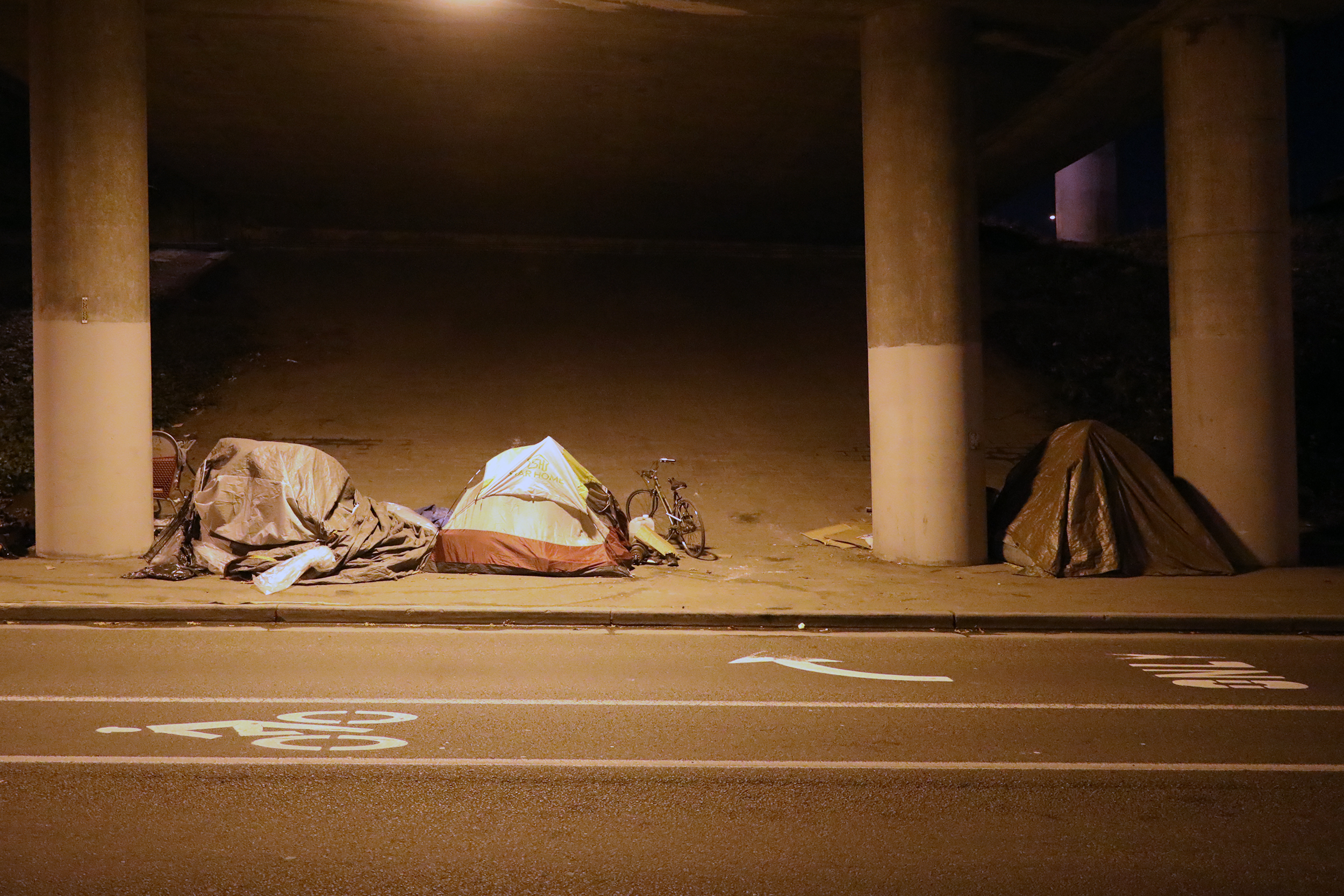 Tents seen under an Interstate 5 overpass on S. Dearborn Street in Seattle, December 2017. (Photo by Matt M. McKnight for Crosscut)

Seattle residents are not only deeply dissatisfied with how the Seattle City Council has addressed homelessness, but also less willing than they used to be to sign off on new taxes to address the problem, according to a poll of 800 likely voters conducted in March that Crosscut has obtained.

Those familiar with the results, who requested anonymity to discuss private polling, were stunned: It’s the first time anyone can recall the usually generous Seattle voters being overwhelmingly skeptical of additional taxation.

Moreover, this is a shift from just 18 months prior, when voters responded more positively to the idea of increasing spending on homelessness, according to a separate poll conducted in late 2016 and published here for the first time. Crosscut was looking into the unpublished 2016 results when it learned of the new poll.

The recent polling was conducted by the firm FM3 Research between March 24 and March 30, two months before the Seattle City Council passed a highly contentious employee tax on large businesses to fund housing and homelessness services. However, the debate over the tax had been ongoing since last fall.

The survey targeted likely 2019 voters, who were reached by cell phone and landline. The margin of error is plus or minus 4 percent. In general, likely voters in off-year elections can be somewhat more conservative than those in presidential election years.

The polling was funded in part by both the Seattle Metropolitan Chamber of Commerce and its political advocacy arm, the Civic Alliance for a Sound Economy (CASE). Other businesses were also involved in its funding, but Crosscut's sources declined to disclose them.

When asked how serious of a problem homelessness is, 88 percent of respondents answered “extremely” or “very” serious, with only 1 percent answering “not too serious.” Similarly, 81 percent said the number of homeless encampments pose an “extremely” or “very” serious problem. This level of concern dwarfed any other issue in Seattle, including traffic, according to one person close to the polling.

The results do not look great for the Seattle City Council, with strong dissatisfaction on how the elected officials have dealt with homelessness, taxes and housing:

With that dissatisfaction may come consequences. A slim 29 percent believed city government needs more taxes to address homelessness, while 63 percent believe it already has enough and can solve the problem with more effective spending.

Driving that split is the belief that, with recent increases in spending for homelessness, the problem has not improved: 65 percent said that, as local taxes have gone up, city government has not shown progress in reducing homelessness.

That perception, however, can be generalized to other areas of city government: 56 percent similarly believe that housing, transportation and city services have not improved with increased taxes.

Members of the City Council were not immediately available for an interview. A spokesperson for the Chamber said she had no comment.

When compared to a poll conducted by EMC Research in September 2016 — prepared to inform former Mayor Ed Murray’s policies on encampments, according to a different person familiar with the survey done then — the drop-off in support for more spending in the intervening year and a half is notable. It looked at 600 likely voters in the 2017 election, another of the off-year ballots where older and more established voters tend to have a strong role.

In the 2016 poll, 64 percent of those surveyed said they believed the city needed “to spend a lot more money to reduce homelessness.” That's a 35 percentage point difference from the more recent poll. In addition, only 40 percent of the 2016 respondents believed the city was not effectively using its resources, a mirror image of the more recent poll showing that more than 60 percent — 63 percent — now think the city has enough money.

Further, respondents were overwhelmingly willing to provide extra spending: 74 percent supported raising sales or property taxes to increase the availability of mental health treatment and case worker assistance. And 70 percent were willing to do the same for more drug and alcohol treatment.

It was this positive response that gave then-Mayor Ed Murray the confidence to propose a property tax to increase homelessness spending in March 2017. Several weeks later, he changed the proposal to a sales tax in tandem with King County. But that effort disappeared after Murray’s resignation in September.

The president of Elway Research, H. Stuart Elway, who was not involved in either poll, called both “credible.”

When provided with the results, some parts were not surprising to him. “The idea that there’s a problem and there’s enough money to fix it is not unique to homelessness,” he said. Most of the time, that will be people’s first reaction, he said. “You could put pretty much any issue in there.”

Still, Elway believed the responses to the March poll could be an indication that Seattle voters are moving away from a willingness to tax themselves. “We’ve only got two questions here, so it’s hard to know, but those are fairly sizable numbers,” he said, referring to the question about raising taxes and whether services have improved with increased spending. “Those are sizable numbers in both of those, so it suggests the possibility of a tipping point.”

Public polling on homelessness is scant. KIRO/Strategies 360 recently conducted a poll related to the new $275 per employee per year tax on large businesses recently passed by the Seattle City Council. That poll showed majority opposition to the measure.

Elway’s firm did some polling last year in Olympia and Tumwater that showed support for increased spending on homelessness.

But Elway wonders if the fierce debate around the employee tax may have shifted opinion, even though the most recent poll was conducted before it passed. “It brought the issue into a [focus] that it hasn’t been in before about the amount of money being spent,” he said.

A few other interesting notes from the 2016 polling: 78 percent of respondents at the time supported safe consumption sites, where people can use illegal drugs under the supervision of medical experts and without fear of arrest.

Additionally, views on what to do about encampments seemed to fall between the loudest voices. Those who wanted encampments removed immediately and consistently represented only about 20 percent of respondents. The majority only supported removals if there was an alternative place for people to go.

Perceptions of encampments and homelessness varied widely by age. People under 50 were much less likely to believe encampments are inhumane and must be closed than people 50 and older.

For all the recent talk about accountability, in 2016 the majority of respondents did not support tying funding for non-profit organizations to results.

78 percent said they believed Amazon and other large businesses should do more to address the problem.