Report: Sheriff’s Office should be more transparent on police shootings

The recommendations come one year after Tommy Le was fatally shot by a King County deputy. 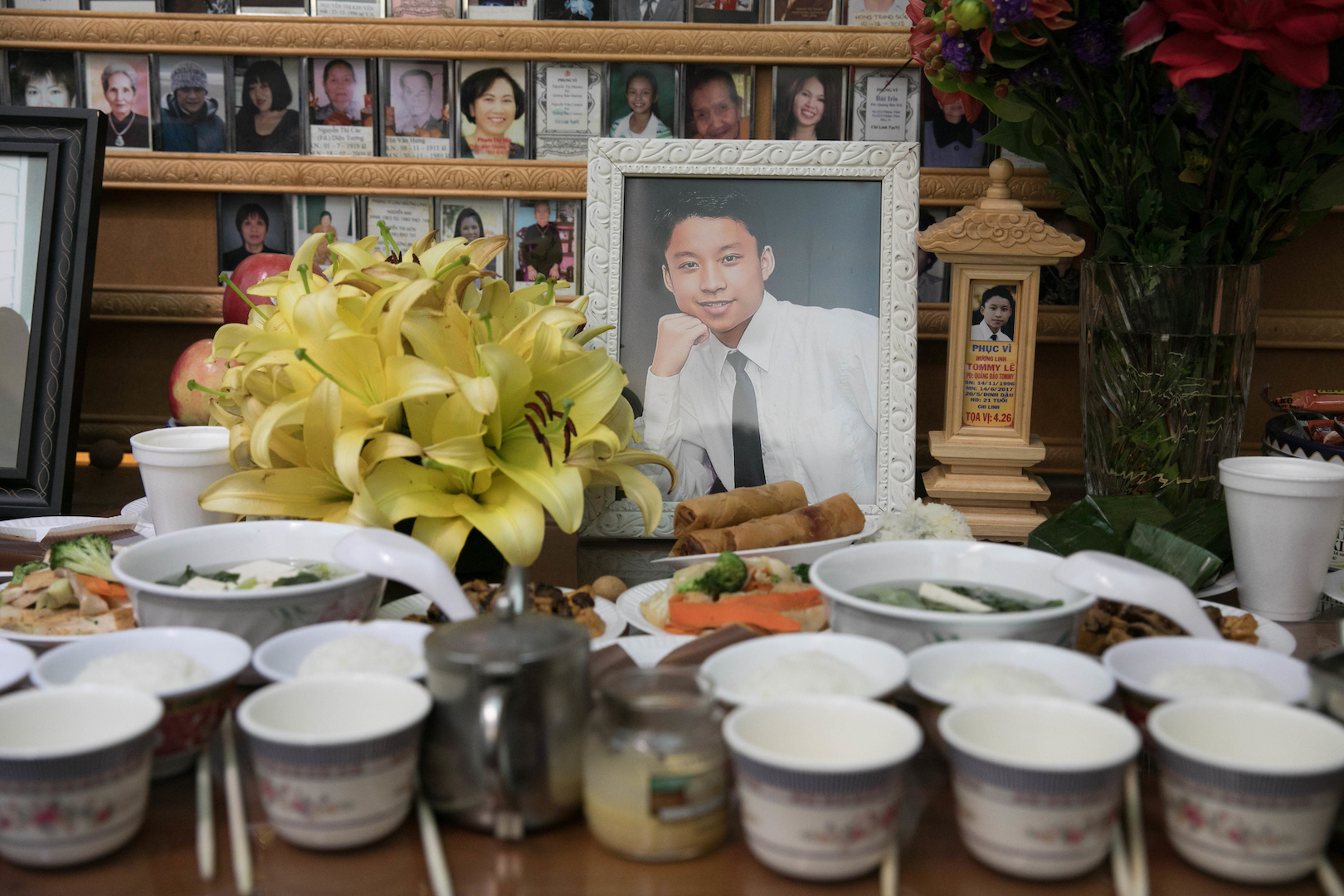 A memorial for Tommy Le at Colam Pagoda Buddhist Temple in Seattle, Washington on Sunday, August 6, 2017. Le was fatally shot by an officer with the King County Sheriff's Department. (Photo by Matt McKnight/Crosscut)

A year after the death of Tommy Le, the unarmed man shot dead by the King County Sheriff’s Department last summer in Burien, the county’s Office of Law Enforcement Oversight has released a report that recommends how the department can be more transparent about high-profile police shootings.

Those recommendations include being more proactive in releasing information to the public and rapidly acknowledging or correcting any misleading information “even when disclosure is uncomfortable and the information is unflattering.”

“The perception of secrecy weakens public confidence and trust in law enforcement,” reads the report. Linda Riedemann Norbut, one of the authors, called the current policies of the sheriff’s department “not particularly deficient” but said it should be more forthcoming.

An officer with the Sheriff’s Department shot Le one year ago on June 13, 2017. The Department claimed Le, 20, had threatened others with a knife. He was shot in the back.

But nine days after the shooting, the Seattle Weekly broke the news that Le had been carrying a pen — not a knife. It was only then that the King County Sheriff’s Department corrected the record.

And even then, the report points out, the Department “continued to refer to the weapon Le had as a knife or ‘whatever was in his hand’ until it was clarified later in the statement under ‘FAQs’ as a pen.”

Following the shooting, the county’s Office of Law Enforcement Oversight (OLEO) asked that Frank LoMonte and Norbut, both of the Brechner Center for Freedom of Information at the University of Florida, analyze the King County Sheriff’s Department’s current policies regarding the dissemination of information to the public.

Deborah Jacobs, the OLEO director, said the recommendations described in the report “are small but critically important changes.”

Some of the report’s other key recommendations include ensuring the Department has a public information officer available at all times and employs public relations experts who can communicate with non-English speaking communities. Le’s family is Vietnamese and some members speak limited English.

On Tuesday, at a King County Council meeting where the report was presented, attorney Jeff Campiche pointed out that the county had taken no action against the officer who killed Le — Cesar Molina. (Molina was temporarily placed on administrative leave but returned to work shortly after the shooting. Less than a month later, Molina struck a pedestrian.) Campiche is representing the Le family.

He added that he believed the Sheriff’s Department “intentionally misstated the truth about the killing” in an attempt “to avoid public outrage over the shooting of an unarmed student of color.” Le was killed the day before his high school graduation.

Le’s mother and two aunts were also at the meeting on Tuesday. They said the last year had been "terrible" and that Jacobs had been the only person in the county to try to do something meaningful for them.

The report makes clear that transparency is especially important in the age of social media, when the public regularly records officers’ interactions with the public, often posting them on networks such as Twitter or Facebook. Despite the mounting public outcry, after the Le shooting, the Sheriff’s Department only updated the public twice via social media, the report states.

“We want to make sure the press isn’t confined when trying to get information that is important to the public,” Norbut said.

Ironically, the report made available to the press on how the King County Sheriff’s Department can be more transparent is partially redacted even though the information blacked out has already been published in media reports. (Crosscut received an unredacted copy of the study.) When asked about the redaction, OLEO explained it was because it “relates to an issue for which an investigation has not yet been completed.”

But as the report itself points out “information that has already entered the public domain cannot negatively affect the investigatory process any more than it already has.”

Only in limited circumstances, such as when nondisclosure “is essential to effective law enforcement,” or “disclosure would endanger any person’s life” is the withholding of information justified, the report states.

The report argues that transparency not only benefits the public but police departments themselves. For example, the Associated Press analyzed two police shootings and found that in Tulsa, Oklahoma when “videos were released within days” of a shooting, “protests in the city remained calm despite the fact that the suspect was unarmed and the police officer’s justification for shooting the suspect was that she thought he had a weapon.”

In contrast, only days later, police in Charlotte, North Carolina shot and killed another man but refused to disclose video footage to the public, resulting in violent protests.

King County Sheriff Mitzi Johanknecht issued a statement about the report on Tuesday, noting she had reviewed its findings in February.

“Transparent and truthful communication is one of the Sheriff’s top priorities. Since taking office, our administration has proactively released information, and accompanying documentation, quickly on a variety of issues,” the statement said.

The Sheriff, the statement continued, “is committed to continuing to have a transparent and open relationship with both the media and the public.”

In response to the sheriff's statement, OLEO said it had "not yet had a substantive conversation with the Sheriff's Office about the report or the policy changes it recommends. Reassurances of transparency are welcome, but policy changes are what will help ensure against the spread of misinformation."

The Le family has filed a $20 million claim in federal court alleging the King County Sheriff's Office knew from the beginning that it was misrepresenting the shooting.