In Seattle, Anthony Bourdain was in his element 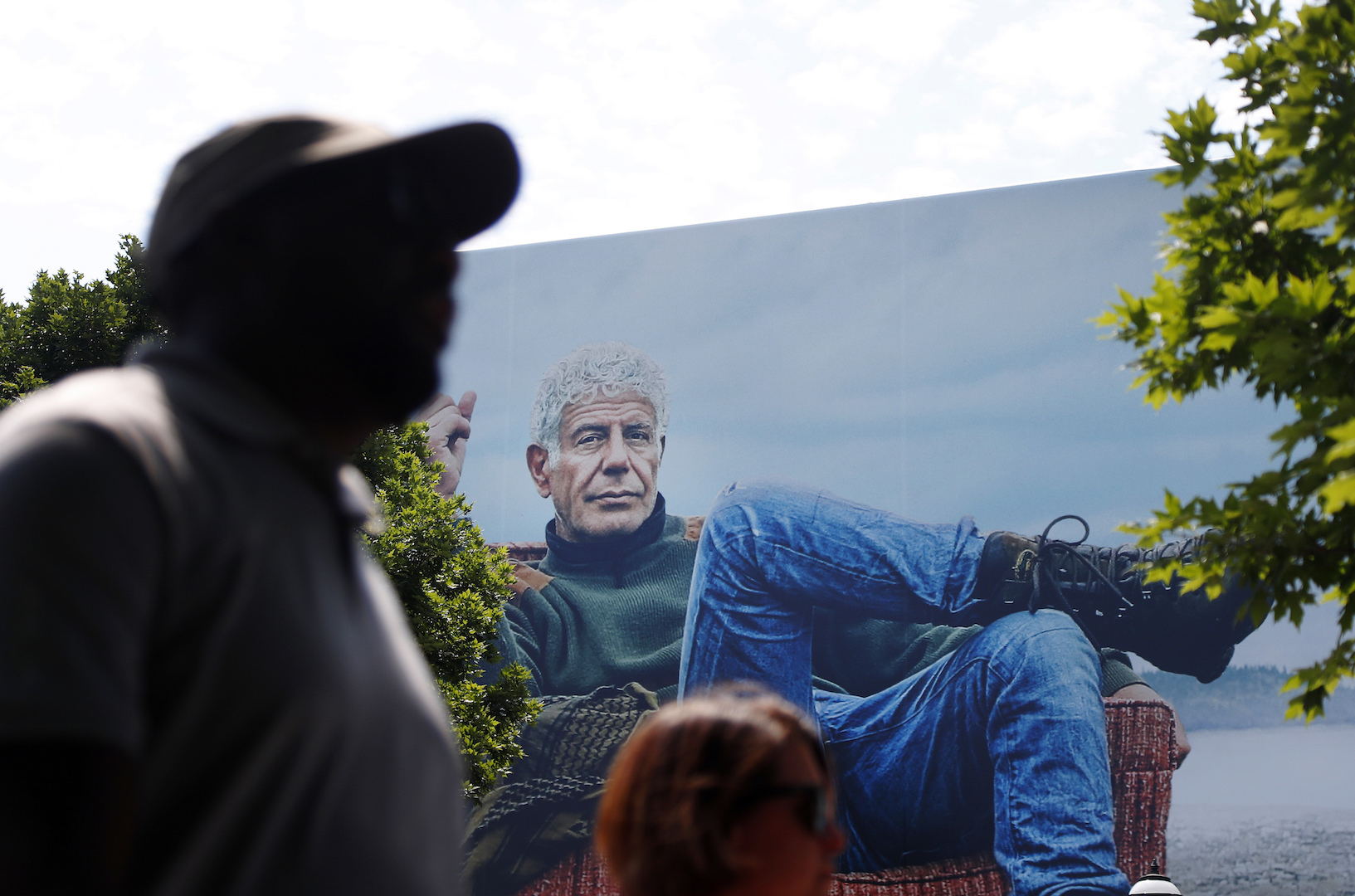 People walk past a billboard for the CNN television show "Parts Unknown" with American celebrity chef Anthony Bourdain, Friday, June 8, 2018 in Atlanta. Bourdain, 61, was found dead Friday in his hotel room in France while working on the series which features culinary traditions around the world. (AP Photo/John Bazemore)

I felt gut-punched when I got a text from my son this morning saying that Anthony Bourdain was dead.

Last summer, I had the privilege of having lunch with Bourdain when he and his crew came to town to film an episode of Parts Unknown. A small slice of that lunch was broadcast in a Seattle episode of his show on CNN last November. As I have written, he talked with three of us Seattleites — handpicked well in advance — over oysters, crab and smelt.

Bourdain had a dark side, which came through at that meal. We talked about serial killers in the Northwest, we talked about a creepy incident with a groupie at the Edgewater hotel back in the day. We talked about Kurt Cobain — Bourdain said he’d met him only once. We talked about ways in which Seattle was changing. We talked about tech bros. Bourdain was a kind of bro himself, which he admitted in an interview with Slate in connection with #metoo. He considered himself anti-bro, but acknowledged that his own bad-boy persona emerged from a macho culture that had served him well.

His Seattle fascinations were more Twin Peaks and grunge than shining Tech City on the Hill. The theme music to the show was by Mark Lanegan, former member of Screaming Trees, one of the great grunge bands. It’s a moody theme. And speaking of Moody, one of his hosts in Seattle was my former colleague, the writer Fred Moody who has written about Seattle’s “demons of ambition.” Moody is also a bartender at the Shanghai Room in Greenwood, and the scenes of Bourdain shot there last summer capture the kind of dark, contemplative edge that is as much Seattle as the rain.

The show’s images of Bourdain drinking alone, world-weary, are incredibly poignant now. The Seattle show was shot at the end of what was a nine-months-straight shooting schedule for the globetrotting chef. He must have been exhausted.

In talking with Bourdain, I found him instantly charismatic, intelligent, insatiably curious, fun. We — Moody, myself and Jack Whisner, a longtime King County transit planner — didn’t interview him, he interviewed us, his mind roving and somewhat unpredictable. He was excited, like a kid at Christmas, about legal marijuana and all the goodies he’d picked up at an area pot store. He talked about the high-fiving tech bros that repelled him in a local bar. He wanted to know why we had so many serial killers here. I felt he was fishing for provocative sound bites, but you could also tell he was a bit fixated. At the end of the meal, he asked us each of us how we would dispose of a corpse. We were all flummoxed and he was surprised. “Don’t tell me you haven’t thought of this before,” he said. I don’t think any of us had. He clearly had.

The darkness was part of the attraction. He seemed like a guy who saw the sad old world, but held out hope, who had compassion for people and a desire to know all of humanity and its eating habits. Over meals, he said, is when our commonality and cultures reveal themselves. You somehow felt the more he experienced that sense of commonality — and we did, vicariously — the more we all could feel those deep connections.

When I saw the show on Seattle, I was impressed. It was like an amazing video column of his insights, obsessions, sense of story. He found a kind of community in visiting us where we lived, celebrating our culture, exposing our foibles. The images were astounding — like, for instance, a Vashon Island picnic scene where an orca suddenly makes an appearance. You could live here your whole life and that wouldn’t happen to you. He brought a kind of magic with him.

Not everyone saw the magic. I got comments from folks on social media who thought the episode didn’t reflect their Seattle. Of course it didn’t. It was Bourdain’s personal take. It wasn’t sanitized, it wasn’t comprehensive, but it was gorgeous, insightful, moody.