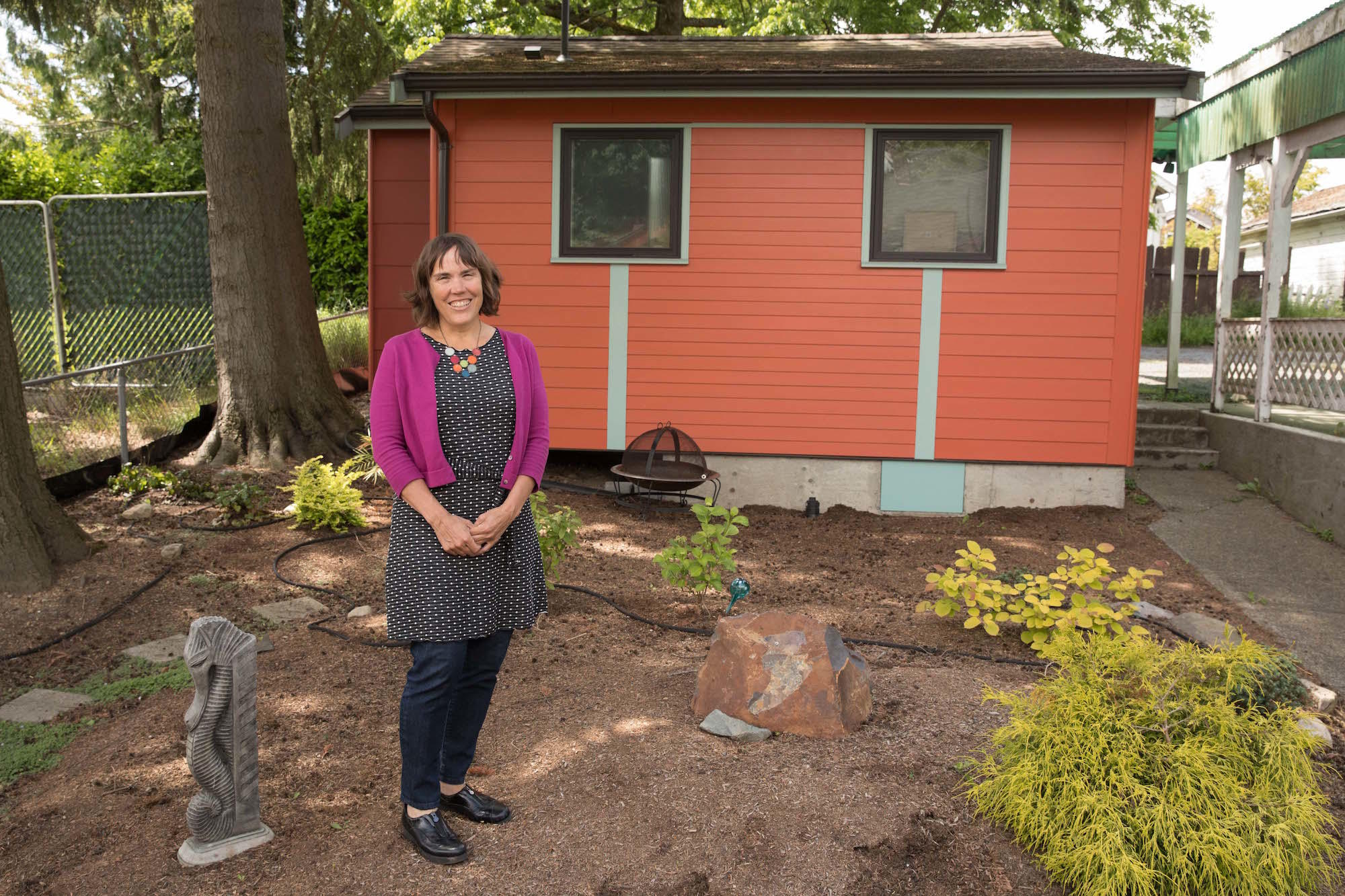 City Hall has long seen basement apartments and backyard apartments as an easy way to help meet some of Seattle’s burning demand for housing.

But as is nearly always the case with housing issues in Seattle, wanting something and making it happen are two very different things.

The Seattle City Council’s effort to increase construction of basement apartments and cottages by loosening regulations is now dragging into its fourth year, thanks in part to legal road blocks thrown up by a neighborhood group concerned about increased density will have on parking and neighborhood character.

The end is now nearly in sight. In late May, the city released its draft Environmental Impact Statement (EIS), a critical step towards resolving the legal complaints. At public hearing on the EIS on Thursday, the crowd made it clear many Seattleites are ready to see the city make its long-delayed changes.

“My family built an ADU under the existing rules and it was really hard to build under that process,” said Seattle Tech 4 Housing's Rachel Ludwick, a Beacon Hill resident who testified at the public hearing. “I like the ability to have my multi-generational family live together. I’m asking city council to move forward and make it as easy as possible to build ADUs.”

Testimony like Ludwick’s was in the majority. Of the 30 or so public commenters at the EIS hearing, only a handful spoke against relaxing regulations. Many support accessory dwelling units for similar reasons as Ludwick — they want to house parents or adult children who cannot afford Seattle real estate. Several people testified that they are building or are planning to build a backyard cottage on a friend’s property in the city.

According to architect and dwelling units advocate Matt Hutchins, backyard cottages cost around $250,000 to design, permit and construct (basement units are $100,000 or less). That is not cheap, but it’s far less expensive than any home on the Seattle market these days.

Existing landlords and would-be landlords also spoke in favor of making it easier to build. The accessory apartments and cottages aren’t an affordable housing solution per se — when rented they tend to be listed at or slightly below market rates for comparably sized apartments. But they both help meet the demand for housing and open up neighborhoods otherwise only affordable to people who can buy a single-family home or rent a whole house.

A handful of supporters see ADUs and DADUs as an environmental step forward. “Sprawl will kill us all,” said 350 Seattle’s Alice Lockhart. People in smaller houses and shorter commutes have lower carbon footprints.

Some opponents, however, also cite environmental issues, worrying, for instance, that backyard cottage development will lead to further loss of the city’s tree canopy, which has been in slight decline since 2010.

The basement apartments have been legal in Seattle since 1994. Detached backyard cottages have been legal since 2009. But, construction of both types has been sluggish to date with just 682 ADUs built 1995-2016 and 292 DADUs built since 2009, in part because of permitting costs and regulatory restraints.

In September 2014, the city council adopted a resolution directing the city planners to come up with ways to spur dwelling unit construction. Officials proposed such reforms as loosening design guidelines, removing parking requirements, and allowing the units on smaller lots.

But the Queen Anne Community Council appealed the city’s determination that the changes were too minor to trigger a full-scale environmental review, saying the officials undersold their proposal’s impact. In December, the city hearing examiner sided with the Queen Anne neighborhood group.

As a result, the city has spent the last year and a half doing an in-depth evaluation of the impacts regulatory changes could have on parking, neighborhood density, transportation, socioeconomics, public services, utilities and more.

City Councilmember Mike O’Brien says the draft EIS validates the idea of opening up options for backyard cottages and basement apartments. “It was great to see the analysis and see that some of the impacts the appellants were worried about don’t seem to be showing up here,” he says. “What’s great is that despite the two year setback, the energy level for backyard cottages seems to be growing as opposed to being stunted.”

The draft EIS, analyses the impacts of three alternatives with varying degrees of permissiveness. Under alternative one, ADUs and DADUs would continue to be regulated the way they have been to date. Notably: Lots in single-family zones could have an ADU or DADU, but not both; the lot must be a minimum of 4,000 square feet; the owner must live in either the main house or ADU; and there must build an off-street parking space. Even so, Office of Planning and Community Developments estimates alternative one would lead to construction of 1,890 ADUs/DADUs over 10 years.

Alternative two is the most permissive. It reduces minimum lot size to 3,200 square feet; allows owners to build both an attached and detached unit; eliminates the off-street parking space requirement; eliminates the requirement that homeowners live onsite (the main house and ADU/DADUs could all be occupied by renters); increases the maximum unit size allowed; and streamlines the project review process. OPCD estimates it would lead to 3,330 new ADUs/DADUs over a decade.

Alternative three is slightly more conservative than two. It has the same minimum lot size and maximum dwelling size changes as alternative two and eliminates off-street parking, but keeps alternative one’s owner occupancy requirement. When a homeowner builds a second ADU, it is subject to the city’s Mandatory Housing Affordability fee. It is estimated to create 3,100 ADUs/DADUs over a decade.

Portland, Oregon and Vancouver, British Columbia, both demonstrate that looser ADU regulations lead to more construction. Portland eliminated off-street parking and owner-occupancy requirements and, perhaps most importantly, waived the $12,000 to $20,000 development impact fee. The city has gone from permitting a few dozen ADUs a year to more than 600. After Vancouver made similar changes, it also jumped from just a handful of permits a year to more than 500 a year in 2015 and 2016.

According to the EIS study, the city expects that the impact of any reforms would be minimal. Services, schools and utilities can absorb the few thousand more residents that would live in the new dwelling units. The single-family zoned neighborhoods in which ADUs and DADUs will be built can certainly absorb more residents. The Seattle Times recently reported that the number of residents in many of the city’s single family neighborhoods only grew 5 percent while the rest of the city’s population grew 18 percent.

The study found that parking — always a source of controversy — would be mostly a non-issue. Even in alternatives two and three, on-street parking would not exceed 85 percent capacity, the city’s threshold for an overly crowded street.

At Thursday's hearing, Queen Anne Community Council’s Marty Kaplan said his group still had many concerns about the draft environmental impact statement, chief among them that he sees the city as taking a top-down approach that doesn’t give enough consideration to what each neighborhood group wants.

The final EIS will be released later this summer or early fall. If there’s no appeal, city council will finally take up the issue and the new regulations could get passed by the end of the year. O’Brien says they are considering other tweaks to the policy to further its efficacy including offering landlords financial incentives to rent apartments or cottages at below market rate and helping low-income homeowners pay for the construction of dwelling units.

If opponents do appeal, it will take three to six months for the city hearing examiner to rule on the issue, and dwelling unit reforms will yet again be kicked down the road.

Like many of the advocates speaking on Thursday, Jessica Westgren of Welcoming Wallingford hopes that doesn’t happen. “If our citizens want to address the housing crisis with their own hands using their own land, then let’s let them do so.”

Mossback’s Northwest: The rise and fall of Seattle’s Kingdome

The Seahawks and Mariners called it home for 24 years, but now much of the city doesn’t even know the stadium existed.