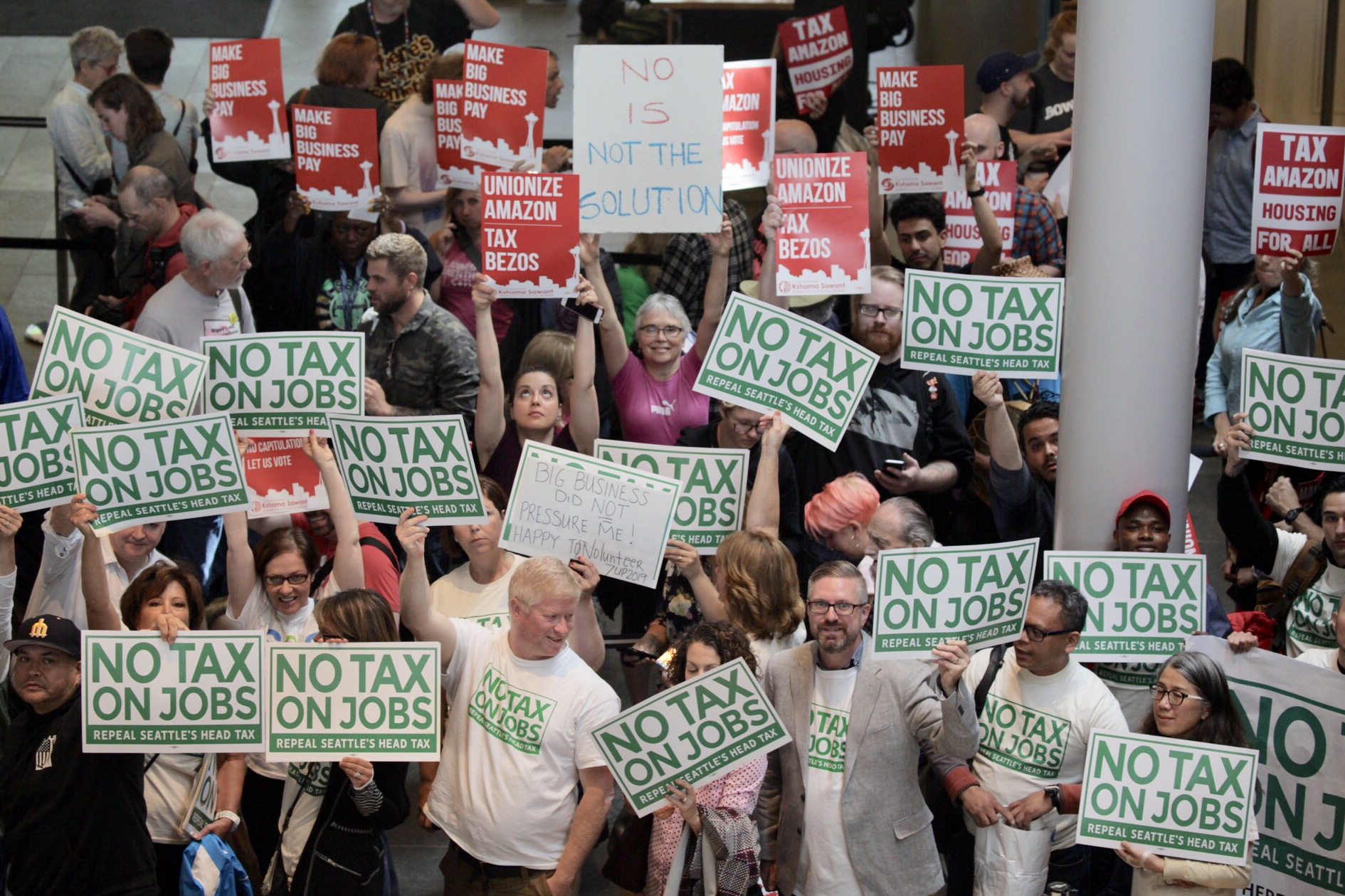 A crowd of head tax opponents and advocates wait in line for a Seattle City Council meeting to discuss repealing the tax, June 12, 2018. (Matt M. McKnight/Crosscut)

Less than a month after unanimously adopting a head tax to help combat the homeless crisis, the Seattle City Council voted to overturn the tax on big businesses, 7-2.

After an hour of acrimonious public comment, emotions reached a boiling point. As the council began voting, supporters of the tax stood at the front of the room overpowering the political process.

First, the anti-repeal crowd took over and chanted, “We are ready to fight, housing is a human right.” Then the pro-repeal tax began screaming back: “No head tax.”

Sighing as she spoke before taking the vote, Councilmember Lisa Herbold framed the tax as an unwinnable fight. “The opposition has unlimited resources and ... the margin simply is too great to overcome. ... I say this with an extremely heavy heart. I don’t want this repeal to be seen as a loss. It is a temporary setback,” she said.

Her sentiments were echoed by Councilmembers Mike O’Brien and Lorena González. “We have a real crisis and this was a clear solution,” said a frustrated and resigned González.

All three were vocal supporters who nonetheless voted to repeal. Their comments were met with shouts of “coward” and “gutless” from supporters of the tax.

In an impassioned statement, Mosqueda doubled down on her commitment to the tax saying, “I cannot in good conscience vote to repeal this without a replacement. We need funding desperately to house the homeless. … I’m really hoping we will find a way for those that have done the best in our city to contribute just a little bit to address this homelessness crisis. That’s what the EHT [employee head tax] would’ve done.”

Councilmember Kshama Sawant lashed out at her council colleagues and excoriated Amazon.

“Jeff Bezos is our enemy. We have to fight big business. The question is, will we have elected representatives who will fight with us or not?”

Her comments echoed sentiments from a press conference earlier in the day: “The message we are sending is that all Amazon has to do is snap its fingers to get the highest political body in Seattle to cave.”

In a statement released on Tuesday, Seattle Mayor Jenny Durkan supported the rationale for repealing the head tax.

“To be successful, everyone needs to be part of the solution. Instead of engaging in a prolonged, expensive political fight, the City and I will continue to move forward on building real partnerships that align our strategies from businesses, advocates, philanthropy,” the statement read.

Under the employee hours tax — known as a head tax — Seattle businesses with gross revenues of $20 million or more would’ve paid $275 per employee per year. It would’ve generated an estimated $47 million annually to help pay for affordable housing and homelessness services.

The unanimously adopted tax was a compromise with Mayor Durkan. The council originally proposed a $500 per employee tax that would raise around $75 million, but ultimately agreed to the lower tax.

The tax, however, provoked an outcry from the business and trades communities. Amazon threatened to halt construction and move their offices out of the city and joined other major businesses, including Starbucks and Paul Allen’s Vulcan, in funding a signature-gathering campaign to put the issue to a vote on this November’s ballot.

The No Tax on Jobs campaign collected more than 45,000 signatures as of Tuesday morning — well over the 17,000 signatures required -- but has not submitted them to the City Clerks office.

Said campaign spokesman John Murray in a statement: “We want to thank our 2,000 tireless volunteers and the more than 45,000 Seattle residents that signed the jobs tax repeal petition. You have been heard.”

The anti-tax campaign successfully hammered the message that the city needs to do better with the funding it already has. A poll commissioned by KIRO found that 58 percent of people oppose a $250 per employee tax with 38 percent in favor. As Crosscut reported, the public’s support for new taxes to address homelessness has been waning in recent years. A poll in October 2016 found a majority of residents supported additional revenue to address the crisis. In March of this year, a new poll found only 29 percent thought the city needed new taxes to address homelessness and 63 percent thought the city already has enough money and can solve the problem with more effective spending.

King County has more than 12,000 homeless residents, with 6,300 people living on the street. A recent report estimated the county needs to spend $400 million on housing and services each year to tackle the problem. Seattle has a goal of building 25,000 homes to address the housing crisis.

“As a frontline worker it’s really frustrating people don’t recognize the urgency,” said Downtown Emergency Services Center social worker Sarah Fentin shortly before the meeting began. “It’s not a question of managing resources, it’s that they don’t exist. If [the city] wants to find another pot of money that’s great, but it can’t be in another ten years. I can’t count the number of people who will die in that time.”

Earlier on Tuesday, as it’s done in years past, Real Change held a gong ringing outside City Hall. Each strike of the gong represented one of 6,320 homeless people living on the street.

The scene at City Hall Tuesday was a microcosm of how the tax has divided the public. Proponents of the tax, many dressed in red Socialist Alternative T-shirts, waved signs calling for the City to tax Amazon. Opponents showed up in nearly equal force waving green No Tax on Jobs signs and cheering with each testimony in support of the repeal.

Phil Cochran with No Tax on Jobs testified, “A month ago it felt like you were ignoring us. Do you hear us now that we have 45,000 signatures?”

Supporters ranging from progressive activists to a military veteran to people experiencing homelessness all testified to try and convince the council to stay the course on the head tax. One woman, hoping to distinguish herself from the crowd said, “I’m not an activist or a socialist or an anarchist. I’m a teacher who took the day off work to be here. ... Not so long ago, it was illegal for Native people to spend the night in this city. I want to know how things are different now."

Tensions between both sides rose throughout the meeting as groups occasionally shouted each other down and booed and hissed.

But Tuesday’s special meeting left the question of what’s next unanswered. The mayor, council members voting against the tax, the county executive, and others say they will find regional solutions, but offered no specifics.

Speaking before the vote, Sawant said, “It’s all fine and good for my council colleagues to say they’re excited and ready to work on plan B, but what is plan B? There is no plan B.”

She invited supporters to a meeting on June 30 at the Langston Hughes Performing Arts Center to regroup, evaluate the repeal and plan their own next steps in support of progressive taxes.

Update: This story has been corrected to say that the No Tax on Jobs campaign did not file their collected signatures yesterday.