On stage, a nuanced portrait of an abuser 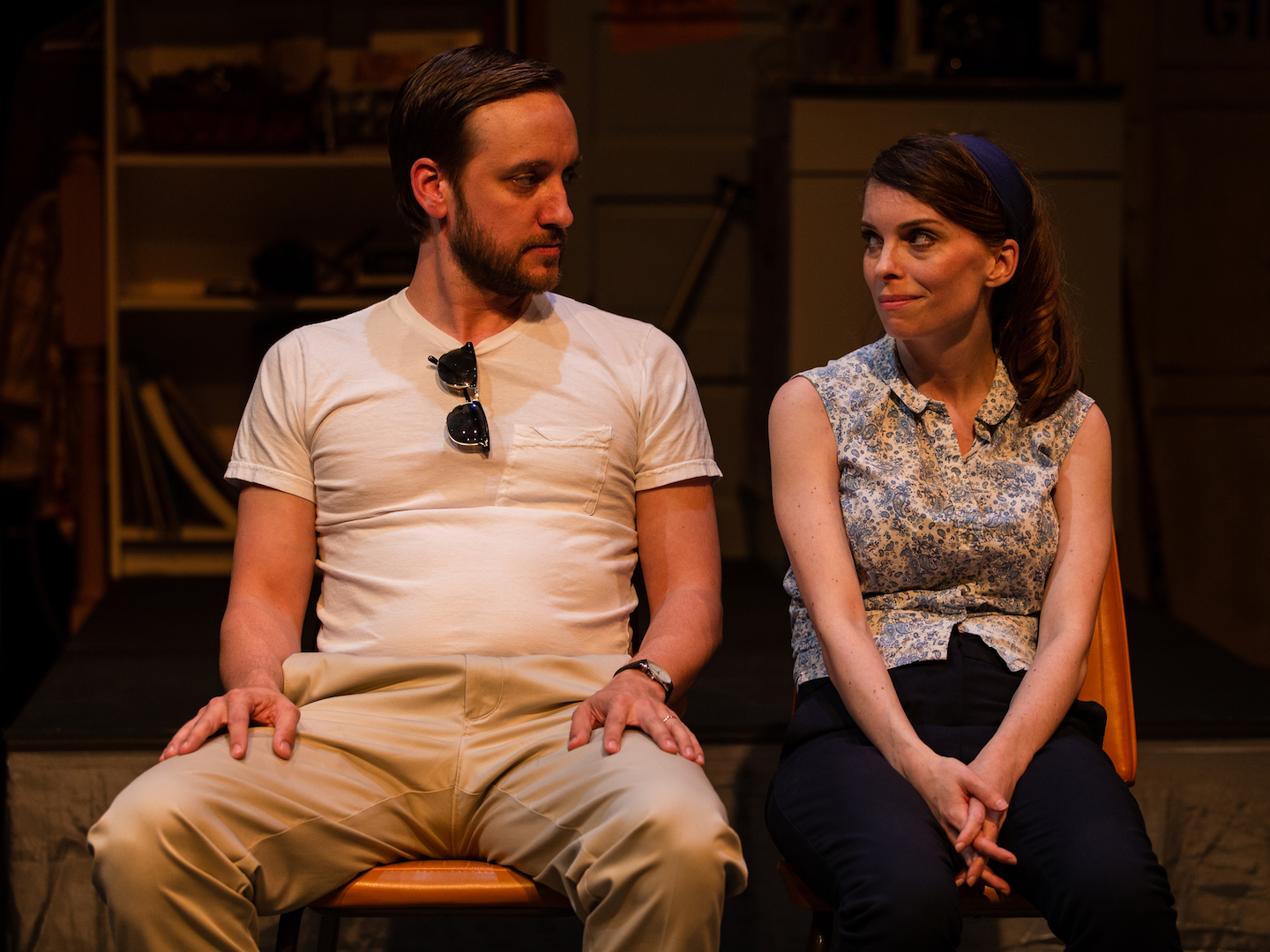 Frank Boyd and Amy Danneker in Strawberry Theatre Workshop's production of How I Learned to Drive. (Photo by John Ulman)

I first saw How I Learned to Drive in its Off-Broadway debut in 1997, and again at Seattle’s Intiman Theatre a year later. Paula Vogel’s account of the sexual liaison between an under-age girl and her doting, decades-older uncle was a gut punch: a witty, engaging but unsparing revelation of a coercive seven-year affair and the severe psychic damage it causes.

Watching the Pulitzer Prize-winning play again at 12th Avenue Arts recently, in a quietly shattering Strawberry Theatre Workshop production directed by Ryan Guzzo Purcell, I marveled again at how artfully Vogel navigated the subject of sexual child abuse, at a time of rising public awareness of the crime. Something else stood out as well: the play’s insightful, multi-dimensional portrayal of not only a vulnerable female victim, but also her male abuser.

Today, we know more about and have less social tolerance for sexual exploitation and harassment in all its ugly manifestations. And yet, in this tightly packed 90-minute one-act the character of Uncle Peck (played here by Frank Boyd, to great effect) is too compelling to simply demonize. He is no violent monster, but soft-spoken and caring. In fact, it is Peck’s sensitivity and apparent kindness toward his niece L’il Bit (the excellent Amy Danneker) that makes her responsive to his advances from age 11 until her 18th birthday.

How I Learned to Drive in no way suggests an adult taking sexual advantage of a child is acceptable. Nor does it imply that the bright Maryland native nicknamed L’il Bit, who narrates the story as an adult, is in any sense responsible for the molestation that crushes her innocence and torments her future.

But life is complex, and good playwrights create characters whose complexity can make us uncomfortable. It is up to the actor, however, to fully realize Vogel’s variegated portrait of a deeply flawed man engaged in the repugnant seduction of a minor.

Seattle-based Boyd is a subtle and versatile performer, previously persuasive in local theaters as a Jewish refugee from the Nazis (The Amazing Adventures of Kavalier and Clay); as an undocumented Italian dockworker (The View From the Bridge); and as an ambivalent Puritan preacher (The Scarlet Letter). Now, under Purcell’s fine-tuned direction, he has managed to make Uncle Peck both appealing and despicable.

“It’s really a play about fully-fledged human beings who aren’t just one thing, but three-dimensional and deeply human,” says Boyd.

In the play, L’il Bit has no father in her life and Uncle Peck, a former country boy with a gentle drawl and easygoing manner, steps into the breach. He is the only relative who recognizes her gifts, singles her out for praise and encourages her academic aspirations. He becomes her confidant and her booster — an outlier in a clan of self-identified “crackers” who joke constantly and crudely about sex but hold conservative views of marriage and family.

Uncle Peck also teaches L’il Bit how to drive a car in a series of “lessons” that cleverly frame the play. Driving is an apt metaphorical vehicle here for an adolescent rite of passage, and a symbol of control and escape. But before L’il Bit can escape her uncle, she is seduced by his “grooming” of her with compliments, excursions, her first cocktail — all the time insisting she is in control as to whether they “cross the line” sexually.

Danneker’s performance is note-perfect and heartbreaking as she shifts back and forth in time and transitions from needy, pliant child into rebellious, traumatized woman. This is primarily L’il Bit’s story. But it also touches on how a seemingly moral, decent man like Peck could defile a child. Capturing what “drives” him, and how he could make such a “horrible” betrayal of trust has been, says Boyd, challenging for him as an actor to piece together.

“The playwright does give great little hints in the script. She just drops in these small suggestions about his past, his upbringing. She never lingers there, but does give a nod to it.”

“The things I focused on,” Boyd continues, “is that Uncle Peck has a drinking problem, and he was a Marine in World War II in the South Pacific, but won’t talk about that. I’ve been working with the idea of some trauma from the war. There’s also a suggestion he might have been abused himself as a child.”

Boyd gives a nuanced rendering of the different phases of a seductive dance. His Peck is understated and soothing, but increasingly manipulative and desperate.

“Sometimes he’s acting impulsively and is not thinking about what he’s doing to her, and other times he really struggles to rationalize his behavior and has to convince himself what he’s doing is okay,” Boyd reflects. “It scares him that he can’t really control it.”

The play also nods to the harsh price of denial by other family members. Peck’s loyal, stubbornly oblivious wife Mary (the vivid Shanna Allman) is aware her husband’s involvement with L’il Bit is extreme and unhealthy. But she blames the child as “a sly one” who is taking advantage of “a good man” — the kind of deflection of blame that keeps many victims from reporting abuse.

In Vogel’s play, sexual abuse is very much a family affair. And for all of us, it’s an ongoing public concern. Norman Glassman, a licensed Seattle counselor and longtime treatment provider to convicted sex offenders, points out that for those apprehended pedophiles who take responsibility for their actions and undergo extended (often court-ordered) therapy, the recidivism rate is low and the remorse genuine. (A 2017 survey pegs recidivism for treated offenders at about 10 percent.)

“It’s a good thing that somebody has written [a play] about a man who does this kind of stuff, and doesn’t define him solely in terms of the molestation but as a complete human being,” Glassman says. “I can’t feel sorry for [someone like Uncle Peck] because his behavior is inherently selfish and he’s devastated a kid’s life. But I can feel compassion for him.”

Compassion isn’t tolerance. And successfully dramatizing the dynamics of such relationships can be enlightening.

“The play has been a learning experience for me as a man,” says Boyd. “As an actor, I also wonder, what will people be talking about over drinks after the show? I think the kind of conversations happening around this show will be significant.”

Recently Vogel, who has gone on to write other successful plays, noted that How I Learned to Drive was a breakthrough for her. It has been performed throughout the U.S. and in numerous other countries over the past 20 years. Clearly, sadly, it continues to be relevant.

“This is the gift of theater and of writing,” Vogel said in a recent interview. “[It is] a transubstantiation of pain and secrecy into light, into community, into understanding if not acceptance.”

Strawberry Theatre Workshop's production of How I Learned to Drive continues at Seattle's 12th Avenue Arts through July 7.