State takes on housing and homelessness with 7 new laws 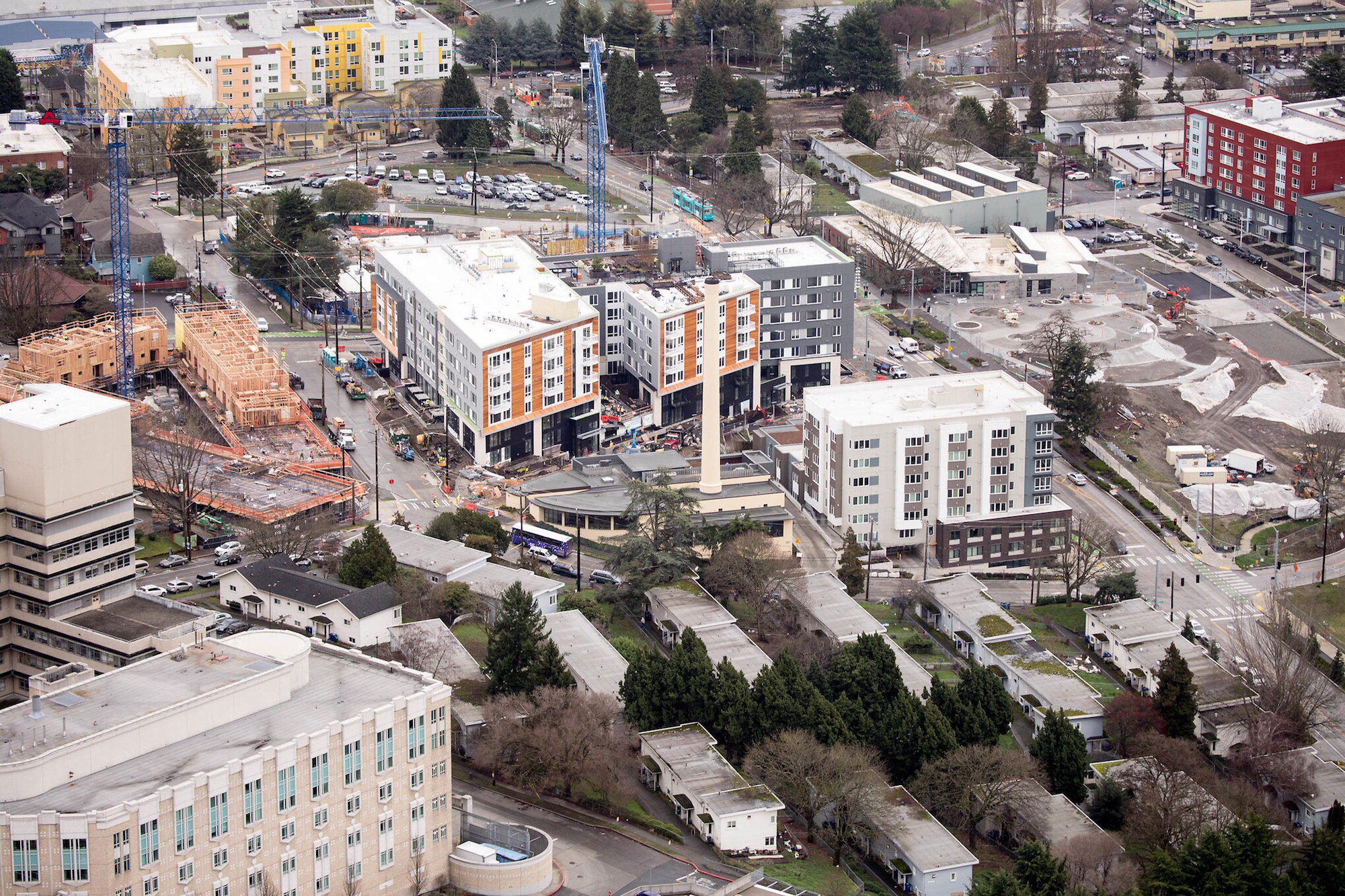 Reconstruction of the Yesler Terrace public housing area in Seattle, which has provoked controversy about how well affordable housing needs are being served.

With affordable housing options in decline and homelessness on the rise, the Washington State Legislature passed seven new laws addressing the crises during the 2018 legislative session.

Nearly a quarter million households in Washington are considered severely cost burdened — paying more than half their income on housing. Homelessness is on the rise across the state. King County has the country’s third largest homeless population.

“It’s a perfect storm,” says Rep. Cindy Ryu, D-Shoreline. “We have rising housing costs at the same time as we have people moving in at a tremendous rate. Homelessness is increasing because people are getting squeezed out as rent gets so high.”

Five of the laws took effect early this month. The broad package will make it harder for landlords to discriminate against low-income renters, help keep permanently disabled residents out of homelessness, provide more land for affordable housing construction and improve access to better fund homeless services, and more. In addition, the Legislature put $107 million into the State Housing Trust Fund — up from $72 million in the previous capital budget — a critical source of money for subsidized affordable housing construction.

“These laws weave the narrative for how our state needs to respond to the growing housing and homelessness crisis,” says Michele Thomas, Washington Low Income Housing Alliance’s director of policy and advocacy. “We need protection for renters. We need deeper interventions and investments in homelessness. We need investments in affordable housing and need to make sure it can be quickly and efficiently be built.”

Ultimately, all seven laws garnered at least some bipartisan support and several had broad Republican support. But Ryu says there was an extra sense of urgency with Democrats in control of both the House and Senate for the first time in five years. “As soon as last November’s election was over, we knew we could not wait another year.”

The new ban on source-of-income discrimination makes it illegal for a landlord to deny a current or prospective tenant housing based on the fact that they’re using rental assistance from Social Security, veterans benefits, Section 8 housing vouchers, or any other income source.

“That kind of discrimination has a disparate impact on people we know are already at a higher risk of housing discrimination — people of color, people with disabilities, single parent-headed households,” says Thomas. “If someone goes out with a voucher and a landlord says, ‘I don’t want to rent to you’ because of stereotypes they have in their head, not only is it extremely unfair, it just makes our ability to use the for-profit rental market really inefficient.”

Thirteen Washington municipalities — including Auburn, Kent, Bellevue and Seattle and unincorporated King County — already banned the practice. The statewide source of income discrimination ban doesn’t actually take effect until Sept. 30, but a second piece of the law is already in effect. It created a new $3 million mitigation fund that landlords can access to pay for any damages caused by tenants with rental assistance. Landlords can apply for reimbursement from the state for damages between $500 and $5,000.

“The state is now the guarantor for tenants using rental assistance,” says Thomas. “That’s really smart because by definition someone using rental assistance doesn’t have a lot of money for a deposit. And because the reimbursement can be up to $5,000, low-income tenants might be seen as more attractive candidates than unsubsidized renters because nobody else is putting down that much as a security deposit.”

As the cost of land continues to rise in the region, the money nonprofit developers have to actually construct housing on that expensive land is stretched thinner and thinner. Under Washington’s new law, state, county and local government agencies can sell surplus land at a discount (all the way down to making it free) to nonprofit affordable housing developers and for-profit developers who commit to renting at below-market rates.

Government agencies often have unused land, whether it’s because they bought a parcel for construction staging on a now-finished project or just own a piece of property that’s no longer in use. Until last week, many agencies were required to get the full market value of that land.

“We need additional inventory of land for affordable housing,” says Rep. Ryu, the surplus land bill’s primary sponsor. “I’m quite confident that someday we’ll see jurisdictions step up and do this. Agencies are not mandated to surplus their land for housing. But hopefully where it makes sense it’ll happen.”

King County Assessor John Wilson sees discounted surplus government land as a critical piece of the affordable housing solution. He says, “This law was a huge breakthrough.” Wilson has been working to map vacant and underutilized surplus public land in Seattle. His early efforts found more than 300 parcels within a quarter mile of transit that are larger than 20,000 square feet.

In the past, public utilities such as City Light and Seattle Public Utilities were obligated to seek the highest value for their land because of fiduciary duty to their ratepayers. Wilson says now they too will be able to sell at a discount or give land away. The new law still exempts the state Department of Transportation, but Ryu intends to work on new legislation to include WSDOT land in the future.

The State Homeless and Housing Surcharge is a critical source of funding for emergence shelters, domestic violence shelters, mental health services, addiction treatment, rental assistance and more. It was funded with a fee on county recorded documents such as real estate filings. The temporary $40 surcharge funds about 60 percent of homeless services in the state and was slated to end in 2023. The new law permanently increases the fee to $62. Thomas says because the fund was temporary, it often got used as a political bargaining chip in the Legislature. “Now they can no longer gamble with funds that are literally saving people’s lives.”

The second helps people with disabilities access the medical records they need to get Supplemental Security Income (SSI) or Social Security Disability Insurance (SSDI). If an SSI or SSDI applicant wants to appeal a denial, they must obtain a copy of medical records that prove their disability. In Washington that currently costs $26, a price point that can be out of reach for very low-income individuals. The new law gives people a free copy of their medical records once a year if they’re appealing an SSI or SSDI denial.

The 2018 legislative session might have been one of the state’s most productive for housing and homelessness laws, but Thomas says that this has to be seen as just the beginning. “If we continue to make this level of progress in next session and the one after that, that’s how Washington is going to back out of our crisis and make sure everyone has a chance to live in safe and affordable homes.”

To that end, advocates have a serious to-do list to push. It includes calls for stronger protections for renters against eviction and unlimited rent increases; policies that will help increase the supply of housing for agricultural workers, working families and supportive housing for the chronically homeless; and, of course, increasing the Housing Trust Fund. Thomas says WLIHA will call for the state to increase the Fund back to its historic high of nearly $200 million in the 2007-2009 budget.

“We just don’t have enough resources and the resources we do have can’t keep up with the sky high rents in our state,” says Thomas. “We’ve underinvested for years in affordable housing, homeless services, mental health services, in substance abuse treatment. There’s a massive wealth gap between our highest income earners and lowest income residents. Yet everyone is shaking their head and asking why is homelessness increasing?"

Correction: This article has been updated to reflect the correct funding level of the source of discrimination ban's mitigation program.