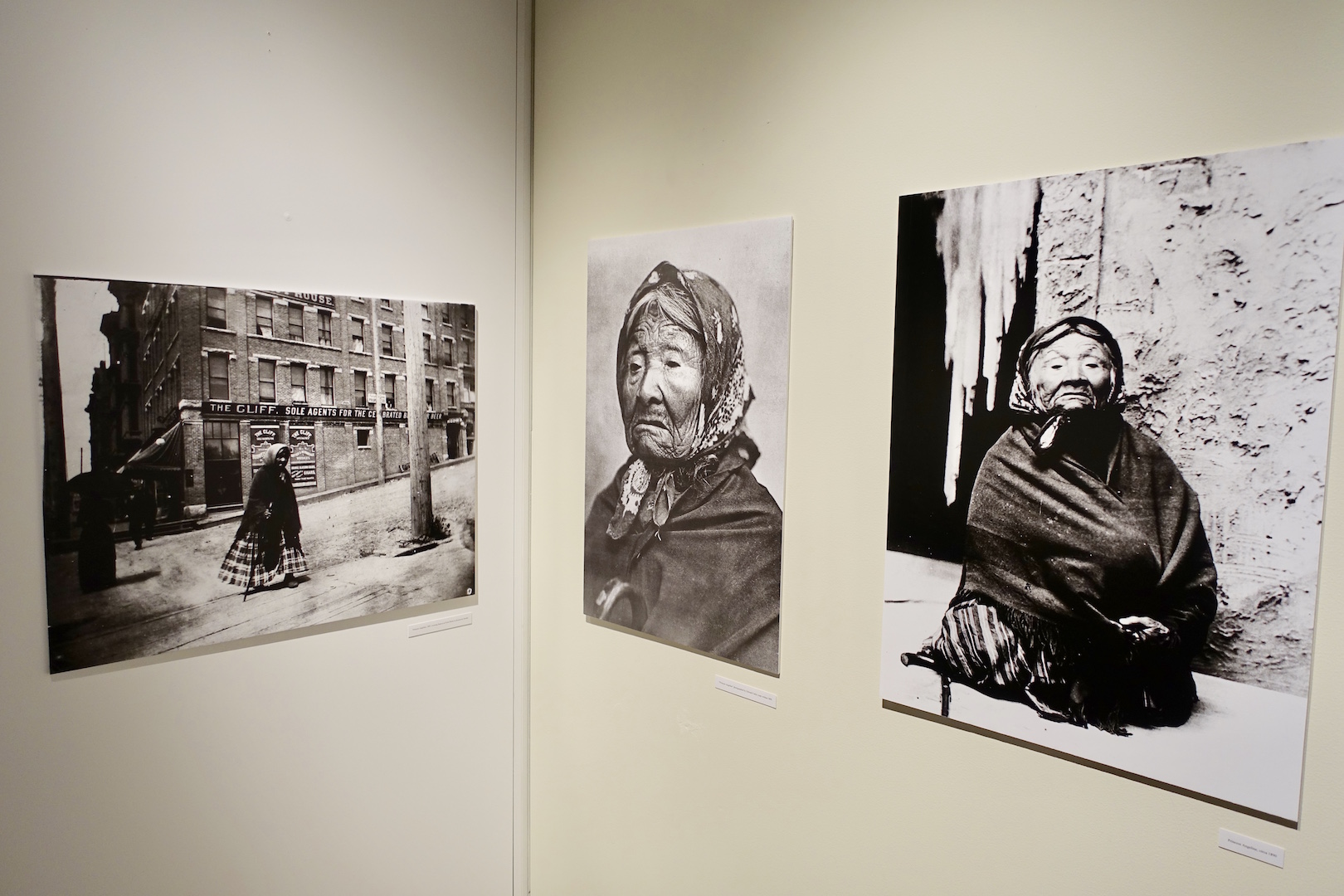 Princess Angeline (daughter of Chief Sealth) was the first Native American photographed by Edward Curtis (middle photo). But other people photographed her too, as seen in Deconstructing Curtis: Romanticism vs. Reality at the Suquamish Museum. (Photo by Daniel Spils)

Picture this: In the 1910s, when photographer Edward Curtis traveled from boomtown Seattle to the reservation town of Suquamish as part of his 20-year project to document Native American culture, he would’ve exited his studio at 4th and University, dodged early automobiles and electric trolleys on his way to the bustling waterfront, and boarded the Kitsap foot ferry, part of the buzzing “mosquito fleet” crisscrossing the Puget Sound to connect traders and outfitters. With him, he would’ve lugged his cumbersome camera gear — and possibly his collection of regalia, props and wigs — to ensure his subjects were firmly rooted in an idyllic past.

Curtis, whose vast collection of work is currently showcased in Seattle Art Museum’s new exhibit Double Exposure, presents modern-day viewers with a knotty conundrum. His goal in photographing and writing extensively about Native Americans was to heighten understanding of these cultures before they were wiped out entirely. But by staging his photos in a time before Caucasians arrived — going as far as to remove items such as clocks or clothing that suggested the contemporary life of Indians — he helped affix a stagnant misconception in the American mindset: that of the “noble savage.”

“His vision was to create a time before contact,” says Barbara Brotherton, SAM curator of Native American Art, “and he had to work hard to do that.” By the time Curtis arrived, Native Americans had already had a lot of contact (whether they wanted it or not), and as Brotherton says, “Native people were very strategic about adapting.”

Today, getting to Suquamish means taking a Washington State car ferry to Bainbridge, driving across the Agate Pass bridge and turning right onto Suquamish Way — an intersection marked by Clearwater Casino and Resort on one corner and a sprawling fireworks stand on the other.

From there it's a straight shot to the Suquamish Museum (built in 2012 by Mithun Architects), housed in a wooded grove on a street that continues on past Chief Sealth's grave down to the Suquamish dock, where the original foot ferry used to pull up.

Inside, the new exhibit Deconstructing Curtis: Romanticism vs. Reality pairs Curtis’s work with photos (taken by people whose names have been lost to history) that show the reality of the Suquamish tribe during the time Curtis was setting its members in amber.

“We have photos in our archive of Native people with flapper haircuts at powwows in the 1920s,” says Lydia Sigo, Suquamish Museum archivist/curator and member of the Suquamish Tribe. In putting together the exhibit, Sigo was inspired by the 2010 book The Edward Curtis Project, which paired a play by Marie Clements (about Curtis’s work and its ramifications) with photographs by Rita Leistner (showing Native people in ceremonial dress vs. street clothes). “This book was a huge influence for this show,” she says.

But Sigo has been aware of Curtis for nearly as long as she can remember. Standing in the gallery, she unrolls a poster from a 1989 Seattle Art Museum exhibit of his work called Shadowy Evidence. (The text reads “The Camera Never Lies,” with the word “never” mostly obscured by one of Curtis’s iconic photos.)

“My dad had this up in the house,” Sigo says. “Since I was a child, I’ve been informed by his views on Curtis.” Her father Charlie Sigo was the previous archivist/curator of the Suquamish Museum, and understood the value and the harm in Curtis's work. “I didn’t go to nursery school,” she recalls, “I would just go to the museum with my dad.” When he retired, she applied for the job, which she’s held for the last decade.

In Deconstructing Curtis, Sigo pairs Curtis’s “Suquamish Woman” and “Suquamish Girl” — somber studies of subjects wrapped in wool blankets — next to a photograph of two girls at the Tulalip Indian School (where Native girls were taken away from their families to be assimilated) sporting pennant banners over their Victorian clothing. Taken the same year, they serve as striking contrast — what was idealized, what was real.

Other photos in the exhibit reveal tribal members wearing top coats, vests and pocket watches, and conducting business in the streets of burgeoning Seattle (then in the midst of the Denny Regrade, which was photographed extensively by Curtis’s brother Asahel Curtis). In one, several Native clam sellers line up at the Seattle waterfront, waiting to take the notoriously unpredictable foot ferry back to Suquamish.

Local laws prohibited the Suquamish and other tribes from speaking their Native language, practicing their religion and engaging in cultural rituals unless it was for the entertainment of others (read: whites). Sigo says clever tribal members, like Chief William Shelton, found ways to get around that — such as telling authorities they needed to perform ceremonies just to show “how backward we used to be.”

And when it came to sitting for staged photos with Curtis, Sigo says, “They understood that he was trying to preserve their culture and they were willing to work with him.” Noting the rampant disease in the Native population and the fact that children were sent to Indian boarding schools for years at a time (where they were beaten if they spoke their own language), Sigo says, “It probably seemed like the end of days to them.” Curtis’s lens may well have seemed like a life preserver in stormy seas.

At the SAM show, the more than 150 photographs have titles like “The Mussel Gatherer,” “Three Chiefs,” and “Before the White Man Came.” (Curtis identified only about one-third of his subjects by name — a fact Sigo, who sat on SAM’s advisory committee, says is a massive hole in his otherwise resource-rich body of work.) Such romantic titles add to what Brotherton calls Curtis’s “myth of his own making.” He preserved images of ancestors that would otherwise have disappeared completely. “But he cast Native people forever in the past,” Brotherton says, “Not as modern people.”

To help amend this perception, the SAM exhibit includes work by contemporary Native American artists: Seattle filmmaker and VR creator Tracy Rector (Choctaw/Seminole), whose Clearwater, People of the Salish Sea project includes “gʷidəq,” a short film about Sigo’s other job as a geoduck diver — long a tradition for the Suquamish; multidisciplinary First Nations artist Marianne Nicolson, whose luminous glass work speaks to the history of the Columbia River; and photographer Will Wilson (Diné, also called Navajo), whose tintypes echo Curtis’s portraits — except that they are of contemporary Natives in clothing they chose to wear. And instead of being trapped in the past, his subjects come to life, thanks to a nifty Augmented Reality app.

These added perspectives emphasize that Native Americans are contemporary Americans. They continue to adapt while preserving a long legacy of strength and struggle.

Back in Suquamish, history is vividly present. On May 31, the tribe was granted back 36 acres of shoreline property that had been rented out from under them in a shady 50-year lease, now finally expired. Next to the museum, trucks groom the newly returned land as part of a plan for walking trails that wind down to the dock at the old ferry landing. There stands a flagpole, flying both American and Suquamish colors.