Where to put affordable housing? On top of a light rail station

Affordable housing is finally going to sprout right on top of the Capitol Hill light rail station. But some think it's too little. 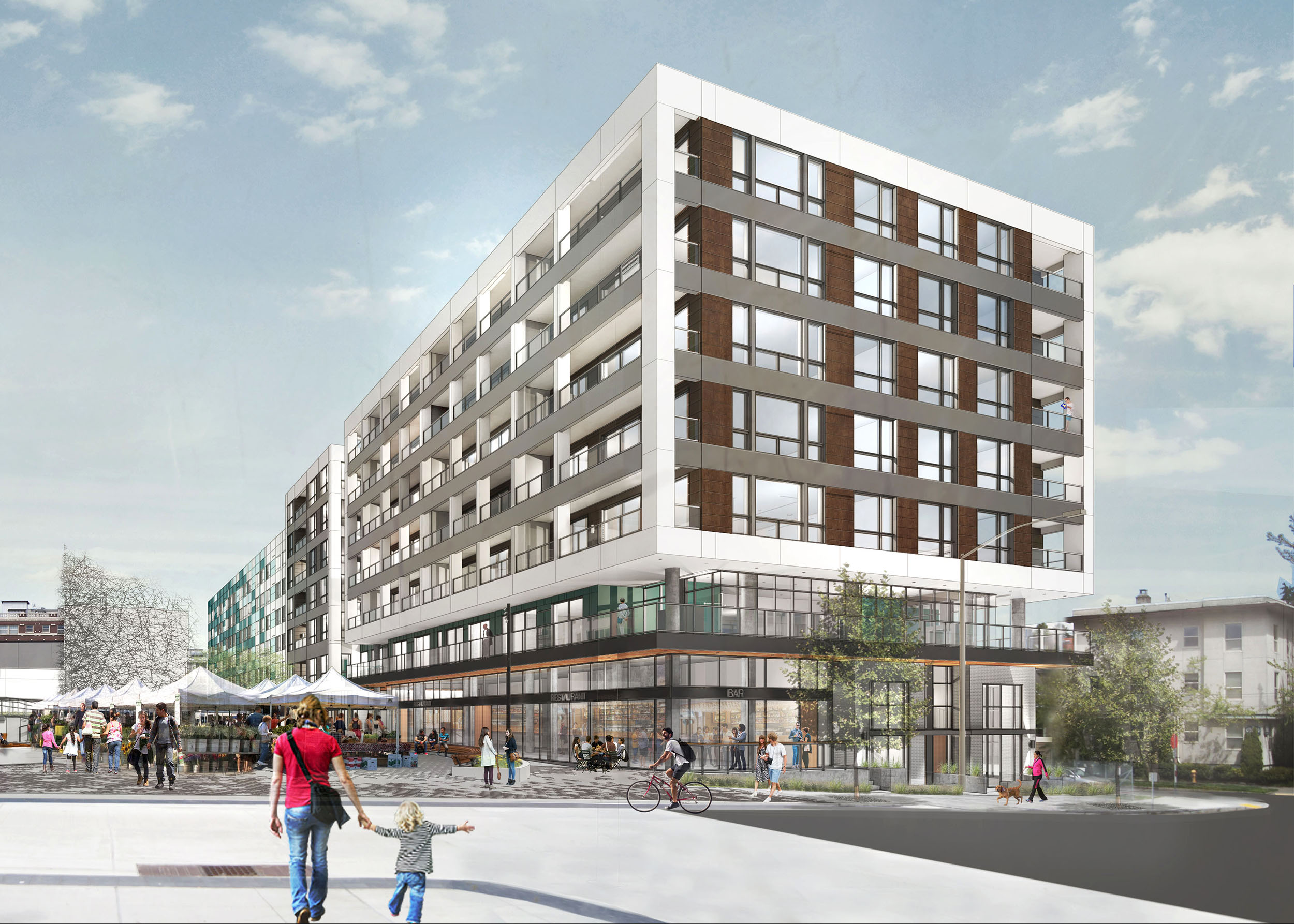 Despite Seattle and King County’s fall 2015 declaration of a homelessness state of emergency, progress on affordable housing and homelessness remains slow. But, progress does sometimes come, even if it requires two decades of planning, as was the case with the new development going up over top the Capitol Hill light rail station.

On Tuesday evening, community advocates, housing developers, Mayor Jenny Durkan, Sound Transit CEO Peter Rogoff and former City Councilmember Tom Rasmussen gathered in front of a small crowd at the station to celebrate the groundbreaking of the new apartment complex. Slated to open in spring 2020, the project will have 428 apartments, retail space, a community center, a public plaza and AIDs memorial spread across four buildings and property. A little more than 40 percent of the units — a total of 178 — will rent at below-market rates.

The development – a collaboration between for-profit and nonprofit developers with a mix of market rate units and affordable units – is a useful example to help understand the sometimes confusing, jargony world of affordable housing as well as something of a case study in how Seattle and the region hope to address their housing challenges.

“We know that the gravest crisis is housing affordability and homelessness. We can’t build housing fast enough,” said Durkan in her speech Tuesday, one of her first since the City Council repealed a tax on businesses last week that would’ve funded housing and homeless services.

The project is a collaboration between Portland-based private developer Gerding Edlen and Seattle nonprofit affordable housing developer Capitol Hill Housing. The nonprofit will develop one of the four buildings with 110 permanently affordable apartments – a mix of one-, two- and three-bedrooms – and the community center. The apartments will be affordable to low-income residents earning 60 percent or less of area median income (AMI), with some units available to people earning 30 percent or less AMI. AMI in Seattle is just over $70,000 currently for individuals.

Gerding Edlen is leading the charge on the other three buildings with their 318 apartments. The majority of the units will be listed at the going market rate. But 68 of them will rent for below market rates – affordable to a family earning 65 to 85 percent AMI. Gerding Edlen is participating in Seattle’s multifamily tax exemption program. In exchange for keeping at least 20 percent of the units at below market rent rates for up to 12 years, the developer gets a property tax break.

“We talk about transit oriented development – you can’t get more transit-oriented than at the station,” said Capitol Hill Housing communications manager Ashwin Warrior. “Think about the opportunities this presents for our residents. People love Capitol Hill’s LGBTQ community, night life, small businesses. It’s important for people of all backgrounds to live here and affordable housing is really essential to that.”

The idea of building housing on top of the Capitol Hill station was originally floated in the late '90s as Sound Transit’s plans for its first phase of light rail construction began to gel. Station construction was ultimately delayed by more than a decade, but in 2008, conversations between the city, agency and community began in earnest about what should sit atop the station entrance, which factored into the development agreement the city and Sound Transit negotiated in 2011.

Cathy Hillenbrand, co-founder and former chair of the community group Capitol Hill Champion, credited advocates with pushing the city and Sound Transit to include as many affordable housing units as they will.

The project also helped reshape the transit agency’s overall approach to development on the land it owns surrounding stations in King, Pierce and Snohomish counties. Now the agency has a directive called the 80-80-80 policy, which mandates that 80 percent of their surplus property be first offered to developers who make at least 80 percent of units onsite affordable to people earning no more than 80 percent of AMI. The policy allows the agency to sell land to affordable housing developers at a discount or even give it away for free.

The standard definition of “affordable” is housing in which rent and utilities cost no more than 30 percent of a person’s monthly income. But when people refer to affordable housing, they almost always mean subsidized housing offered at below-market rates that’s only available to people earning a certain percentage of AMI. That number can vary widely from the Gerding Edlen units at Capitol Hill Station available to someone earning 85 percent AMI all the way down to subsidized housing for very-low and no-income residents, for which the market never provides housing.

Seattle does also have more than 5,300 units of public housing owned and managed by the Seattle Housing Authority. But the city is not building much new public housing, in part due to continually shrinking federal funding.

For-profit developers play a key role, as well, and one that’s growing. In addition to simply providing much needed housing to meet Seattle’s massive demand, for-profits sometimes provide housing for low- and middle-income earners, as is the case with Gerding Edlen’s apartments at the Capitol Hill station. Sometimes the units come through voluntary programs such as MFTE that earn developers tax breaks. Many will come from the city’s new Mandatory Housing Affordability program, which replaces a voluntary version of the program called Incentive Zoning, will soon be in effect citywide. Developers will be able to either build affordable housing units on site or pay a fee into the city’s housing fund (which helps fund more nonprofit affordable housing development). In exchange, developers can then build taller, denser buildings than they previously were allowed, which is more profitable.

This year, the city's Office of Housing funded 10 nonprofit projects that will build 944 units of affordable housing. Last year, 58 market rate buildings participating in the Multifamily Tax Exemption program were either completed or permitted and will add 1,237 affordable apartments to the city housing stock. In 2017, the Inventive Zoning and Mandatory Housing Affordability programs produced (or will produce) 77 affordable units and nearly $33 million in fees to the housing trust. Both numbers will rise when Mandatory Housing Affordability is fully implemented.

Given the scale of the problem – more than 12,000 homeless people living in King County and a 10-year city goal of creating 50,000 units of new housing to ease the affordability challenges – some people criticize the Capitol Hill station project for not doing more. Architect David Cole wrote recently that developers should’ve maxed out the density capacity to build thousands of units instead of 428. Given that the development is literally on top of a light rail station, he also argued that the 216 parking spaces being built are an unnecessary expense and waste of space that could’ve been used for more housing.

By the time the Capitol Hill project is complete, it will have been about 10 years in the works. Regardless of the project size, advocates and officials agreed Tuesday that that’s too long.

“We can’t take that long in a crisis,” said Capitol Hill Housing vice president Michael Seiwerath at Tuesday’s event. “We need to do better.”

Correction: This story has been updated to correct an error describing Sound Transit's 80-80-80 policy and the city's Multifamily Tax Exemption program.