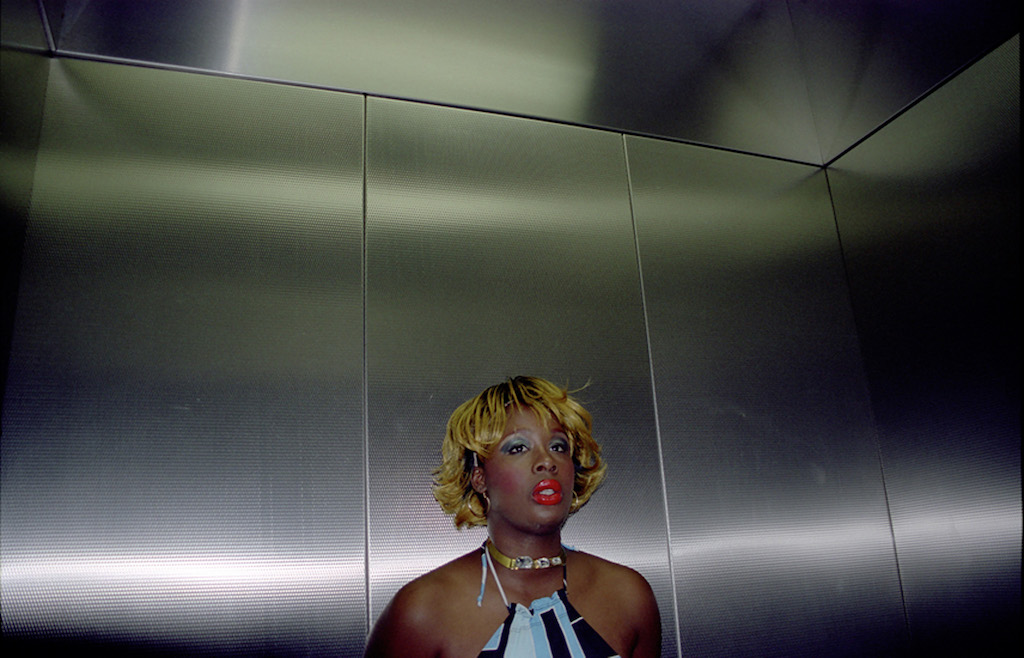 This past spring, Mickalene Thomas wowed Seattle Art Museum crowds with wildly colored, textured and storied paintings in the group show, Figuring History. Now she’s back — this time at the Henry Art Gallery — with a show of equally eye-popping large-scale photographs of African American women, many of which she took as studies for the paintings displayed at SAM. Get the full scoop in our story. —B.D.

If you’re a film nerd looking for a heartwarming story of film rediscovery and restoration, Saving Brinton is the movie for you. This charming documentary focuses on Michael Zaha, an Iowa history teacher and bewhiskered eccentric whose home is filled with treasures from estate sales and junk stores. “I like to save things,” he says, “especially if it looks like they’re too far gone.” Among his salvaged items: a collection of films and memorabilia (flip books, posters, magic lanterns, projection equipment, Victrola phonographs) that once belonged to Frank and Indiana Brinton. From the 1890s to the 1910s, the Brintons toured their multimedia show around rural Iowa. Highlights included the surreal short films of French special-effects pioneer Georges Méliès. Zaha bought the Brinton collection in 1981, then spent decades trying to capture the interest of film-history experts. When that finally happened, Zaha learned he had the only surviving copy of Méliès’ “The Triple-Headed Lady” (1902) in his possession. Along with being an inspiring tale of film preservation, Saving Brinton is a touching portrait of a cheerful small-town oddball bringing real joy to his community. —M.U.

The mere existence of Capitol Hill’s Ada’s Technical Books and Cafe is a reminder of what a special city we live in: a place that supports independent bookstores, community and the nerdy side of interests — from video games to cooking. In addition to offering a lovely cafe space, Ada’s also hosts regular events. This weekend, join Ada’s resident mixologist Tony James for a special Summery Drinks workshop where you can gain some confidence at drink-making or add a few more drinks to your repertoire with the take home recipes. During the workshop, enjoy a complimentary refreshing glass of sangria, and treat yourself to a cocktail from Ada’s just-released summer drinks menu.

Japanese gardens are nice — but Japanese gardens with butoh dancers slowly making their contorted way through the foliage for three hours are even better. DAIPANbutoh Collective’s Joan Laage directs two site-specific iterations of just such an event in Wandering and Wondering. The first, in Seattle’s Kubota Garden, is accompanied by music from Michael Shannon and Sam Yoder. The second, in the Seattle Japanese Garden, features music by Gyre. Seven dancers will perform. —M.U.

Science and a Movie

Remember when you a kid and the 1989 classic Honey, I Shrunk the Kids was released? Nostalgia is once again coupled with learning at the latest edition of Pacific Science Center and Central Cinema’s Science and a Movie. On the big screen, journey alongside the kids as they survive their yard, and alongside the redemptive Rick Moranis in his quest to save his kids from a situation he unquestionably placed them in. Afterward, enjoy a talk by Rae Eaton, research scientist with The Bush Lab and president of UW’s Women in Chemical Sciences.

Known for creating fast-paced, shape-shifting, over-sharing one-woman shows (BUST, The People’s Republic of Portland) Lauren Weedman returns to the city she once called home. Her new show explores painful material — divorce, aging, facing up to who you really are — by way of her alter ego, Tammy Lisa, star of a country music variety show. It’s a kooky set-up but one that allows Weedman’s gift for creating oddball characters and sudden bouts of truth telling to shine through. Read our interview with Weedman. —B.D.

There are few shows I look forward to more than Abmeyer + Wood Fine Art’s annual Bodies + Beings. The 2018 edition features six female artists whose ceramic and glass-sculpted “beings” range from lightly fanciful to darkly twisted. Christine Golden’s “Building Blocks,” a ceramic sculpture with an adhesive sand coating, consists of a fragmented head and torso that are wildly disproportionate in size, yet uncannily alive thanks to artfully glazed eyes. Kirsten Stingle’s wall-mounted, knife-blade-crowned ceramic/mixed-media piece, “Whisper Play,” has both a pageantry and an air of gossipy intrigue to it. Kelly Stevenson’s powerful work digs into shadowy corners of the psyche, with “Upstream” and “Dilemma” evoking daunting struggles of striking complexity. Both are bona fide masterpieces. Fine work by Christina Bothwell, Ariel Bowman and Taylor Robenalt rounds out the exhibit. —M.U.

Alex Katz: A Life in Print

The New York artist, who just celebrated his 91st birthday, was one of the few late-20th-century artists who successfully carried the torch for figurative painting during the heyday of abstract expressionism, op art and other trends of the era. But Katz was also an industrious printmaker, who considered his prints to be the “final synthesis of painting.” This expansive show — drawn from the holdings of Portland, Oregon, collector Jordan D. Schnitzer — is an eye opener. Highlights include: his Face of the Poet series (1978), in which small, square-cropped portraits of art-world notables are set against expansive white backgrounds; his Pas de Deux series (1993-1994), capturing restless couples in ambiguous embrace; and “Vivien X 5” (2017), a five-takes-in-one study of a young woman’s face that keeps slipping from full view. These cool, smooth distillations of people and, more rarely, flowers are instantly recognizable as Katz’s and no one else’s. —M.U.