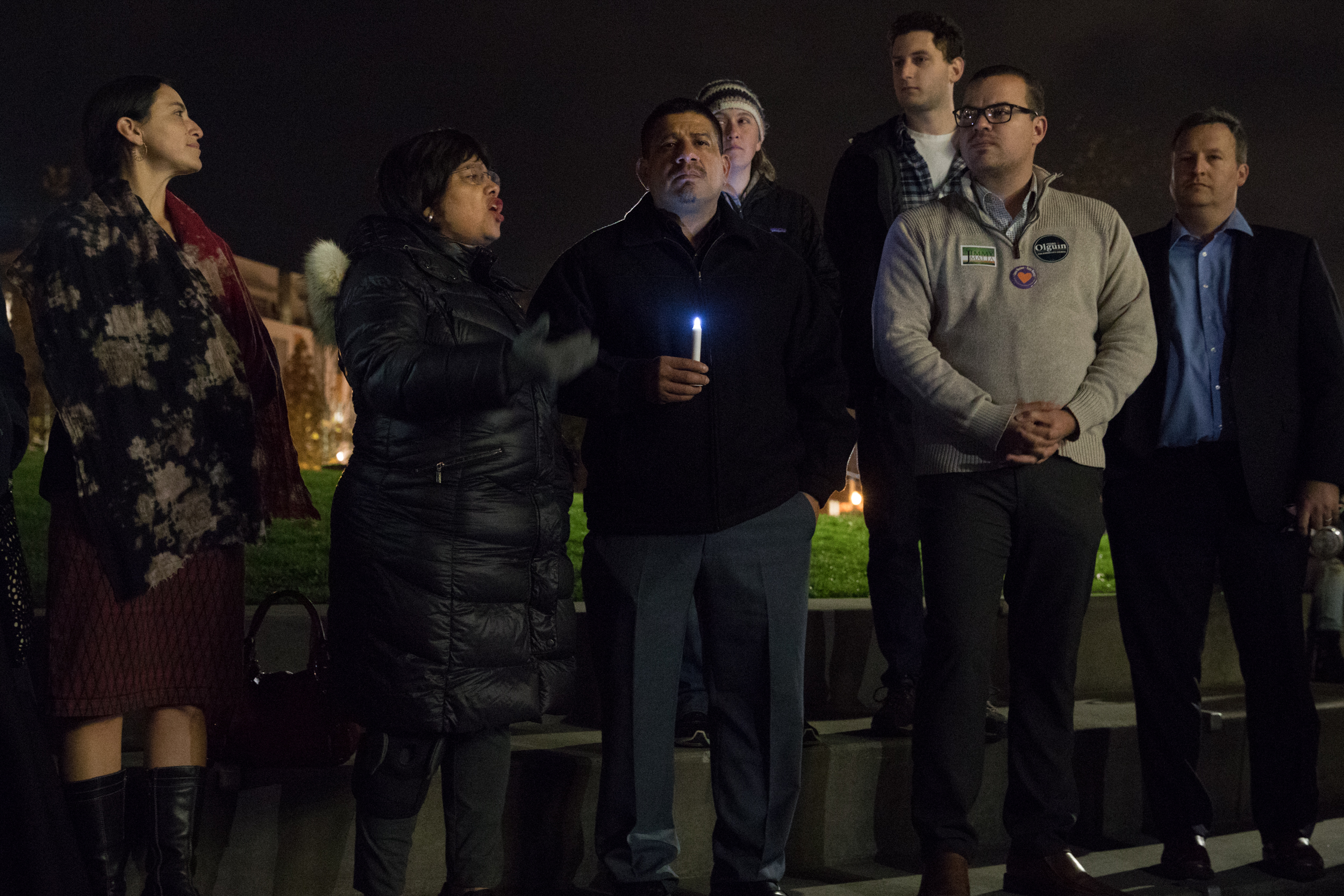 Jimmy Matta at a candlelight vigil outside of Burien Public Library in November. (Photo by Matt M. McKnight/Crosscut)

Update: On Monday night, the 62-year-old suspect turned himself into Burien police. He "was arrested and subsequently released pending the investigation outcome.  Charges are expected to be forwarded to the Prosecutor Office, recommending malicious harassment charges," police said in a Tuesday statement.

Looking shaken at a press conference on Monday, Burien’s first Latino mayor, Jimmy Matta, spoke about an apparently racist attack he endured over the weekend, which police are investigating as a possible hate crime.

Matta, 42, said he was attending the Olde Burien Block Party on Saturday when an older, White man grabbed him by the neck from behind and pushed him to the ground. Although he was only slightly injured — a laceration on his left arm — Matta said he felt frightened.

“I was wondering if he was going to come back with a gun. That’s what went through my mind,” Matta said to a group of reporters, fellow Burien leaders and supporters in the city of 50,000 just 10 miles south of Seattle. “You know, there’s bad apples in every community, and Burien is no different.” With his 15-year-old daughter standing by his side, Matta said: “If I were to not step up and speak about this, it would be normalized.”

Matta also said the attacker called out his Latino heritage and muttered: “You think you’re a celebrity.”

Burien Police Chief Theodore Boe added that the suspect had said: "Illegals aren't going to take over our community."

A King County sheriff’s spokesperson told the Seattle Times that a witness provided a possible first name for the suspect, described as a man in his 60s. The assault could be prosecuted under the state’s hate crimes law, the sheriff’s department reported.

Specifically, Matta said, the man seemed to take issue with the city’s so-called sanctuary ordinance, which instructs city employees not to inquire about a resident’s immigration status. The legislation also prohibits employees of the city from collecting information about a resident’s religious affiliation.

The Burien City Council passed the ordinance in a narrow 4-to-3 vote last year.

Craig Keller, who is behind a group called Respect Washington and now making his third run for Congress as a Republican, led an effort to repeal the so-called sanctuary status of the city. After an effort to place the repeal on the ballot was stopped by a legal challenge, Respect Washington circulated a flier that purported to point to the specific addresses of undocumented immigrants and the crimes that they had committed for the past nine years.

Many viewed Matta’s win last November as representing a victory for those who support sanctuary cities across the nation and oppose President Donald Trump’s policies on immigration and other issues.

Matta is the son of undocumented farmworkers from Guatemala. Before he won election to the council and was chosen by fellow council members to be mayor, Matta endured a number of tense moments throughout his campaign. Still, at the time Matta said: “I don’t believe that a lot of the stuff that is going on is racist. I do believe it’s fear of change.”

At the press conference, Matta pushed for the community to move forward.

“We have to stop this nonsense. We have to come together as a community, as a nation,” Matta continued, saying that political parties or the color of one’s skin shouldn’t matter.

“When you look at me, I have to prove every day that I’m an American citizen,” Matta said. But “there’s nothing I can do to change the color of my skin.”

“We’re all immigrants to this country,” he said.

Asked if there was room for forgiveness, Matta, who described himself as a God-fearing man, noted that all humans are imperfect. Speaking about his attacker, Matta said: “I feel pity for this individual. I think he might need some help.”

Although he said he had heard personally from only a couple of council members, Matta said he believed each of his colleagues would condemn acts of violence like these, even those who voted against Burien’s sanctuary ordinance.

Asked if Burien’s community had made any progress with regard to racial tensions, fellow City Council member Nancy Tosta simply said: “It’s hard to separate the changes we’re experiencing with the changes going on in our national politics.”

In 2017, national data show that hate crimes rose 12 percent over 2016 levels in 38 of the largest cities. There were 1,038 hate crimes in the nation's 10 largest cities – the highest in more than a decade. Crimes against Latinos increased by the greatest percentage, followed by Muslims and Arabs and African-Americans, according to the Center for the Study of Hate & Extremism at California State University, San Bernardino.

Tosta suggested that national “toxicity” associated with President Trump and immigrants could be contagious.